Previously on Legends of Tomorrow, Nate saw Zari’s hologram she made before they broke the timeline, Astra released a bunch of rotten souls out of hell and back into their bad bods, and the Legends learned at these “Encores” are unkillable since their chit is still in hell so they put Rasputin in a bunch of jars.

At the end of the last episode, Constantine bee-bopped to hell, so we open this week’s episode there, with Constantine telling Astra to call the souls back. She just kind of laughs in his face; this is a win-win for her. The more people these souls corrupt or kill during their Encore performance, all the more souls she’ll get that she wouldn’t have had before. Plus, she gets to torture Constantine. 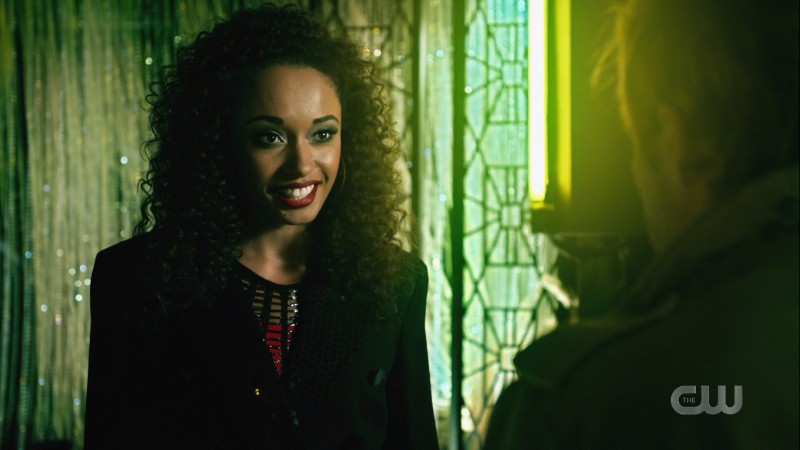 He threatens to kill her but she again is unfazed. She’s already in hell, what more could he do to her? Constantine’s spell ends and the sigil finishes and he’s bamfed back up to the Waverider, where Avalance is still waiting for him. Ava wants a debrief but Sara knows Constantine will need a drink before he’ll share. 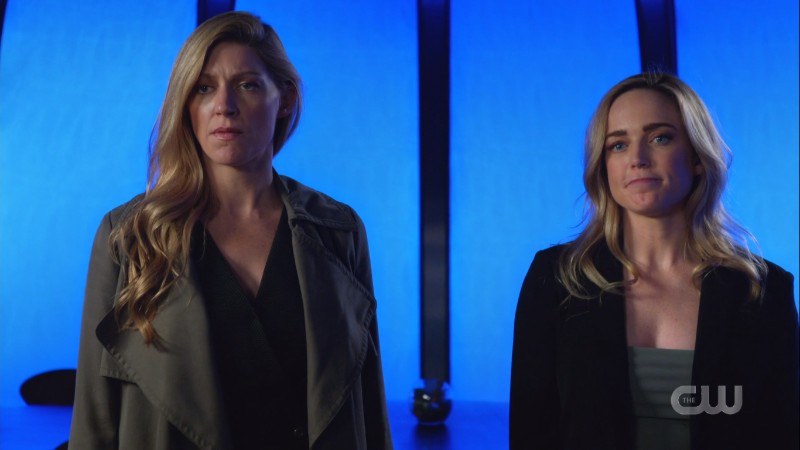 That feeling when your friend texts you after their date about something unrelated and you’re like EH HEM I NEED DETAILS.

Meanwhile, Nate is trying to get Gideon to play Zari’s video again, but she was rebooted so she doesn’t have it anymore. But when Behrad comes in to see what he’s up to, Nate’s brain flickers an image of Zari in his stead. Behrad thinks maybe Nate is losing it, and anyway they have to go because Sara asked them to gather.

Constantine gives everyone the scoop on Astrid and the Encores, and Sara, for one, is pumped that this mess isn’t their fault for once. 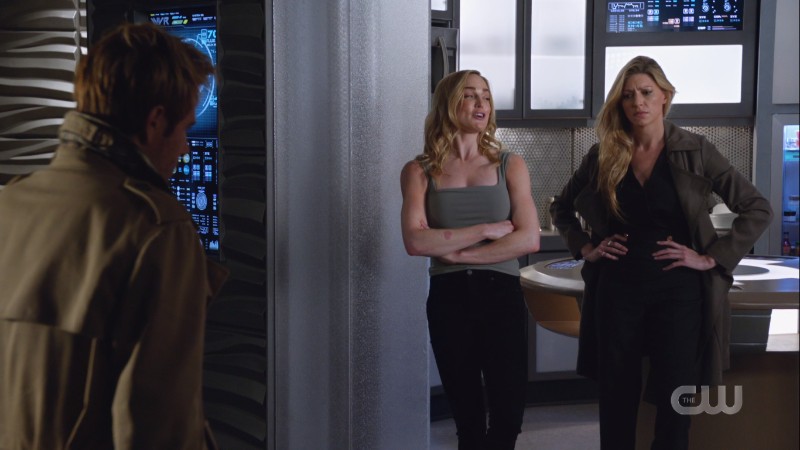 This is absolutely me at my day job. “This situation sucks and I WILL help you fix it but I would like to reiterate how this is not my fault.”

Ava asks what they’re supposed to do if sending the souls back to hell is moot, and Sara suggests they start collecting them on the ship for now.

After the team meeting, Behrad tells Sara that he’s taking Nate to 2044 so they can celebrate his dad’s birthday, and Nate is going to pose as his business school professor to help keep up his ongoing lie. Sara sends them off and just as they leave, Gideon tells her that there’s a time quake pointing back to LA in 1947.

When Sara gets to the command center, she finds her girlfriend standing there all set to give orders, but Ava stops herself and apologizes. Sara just smiles and takes over, splitting them into two teams, a ground team and the QB team. 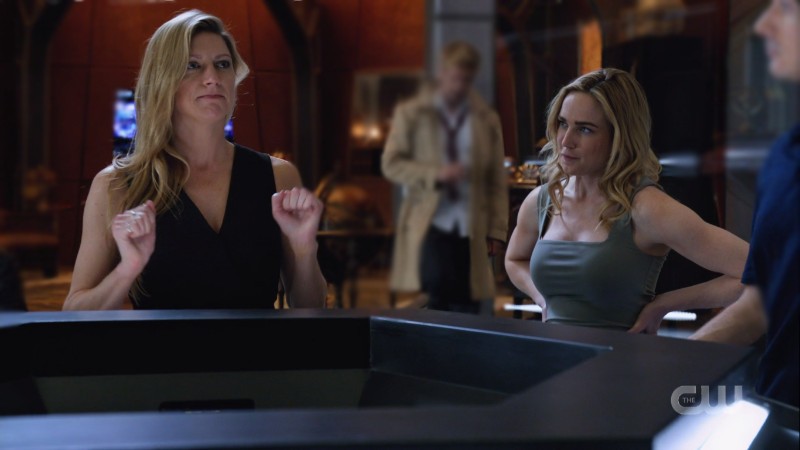 When your girlfriend is a bottom and tries to top.

At first Ava is pumped she’s called to QB already even though she’s only been on the non-Bureau side of things for a little while, but Mick says that this is the safe, boring job and not exactly a prize to be won.

When Behrad and Nate get to Behrad’s parents house, they also meet Behrad’s sister, Zari, the social media influencer extraordinaire. She’s talking to her social media following on “Cat Chat” (wonder why she was drawn to that…) and giving instructions to her entourage. 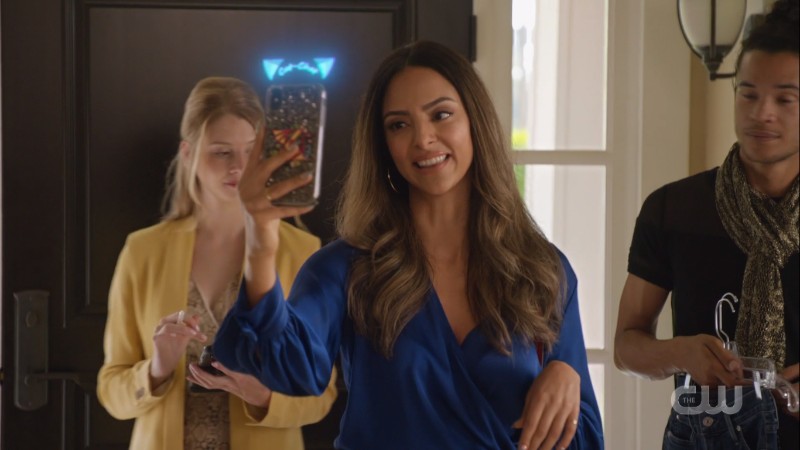 She says goodbye to her “Z Nation,” of which I am firmly a part of, then notices that Nate is just ogling her. Nate mumbles something about having seen her video, and Zari assumes he means on her social media, so thanks him like he’s a fan and snaps at her brother in Persian for bringing a creeper to their family dinner.

At the same time, and yet also almost 100 years earlier, Sara, Constantine, and Ray head to the source of the time quake in a PI’s office in LA. There, they find a pile of ash with infernal residue, meaning someone was destroyed via hellfire, so they know they’re in the right place.

They see the telltale silhouette of a dame in need of some assistance, but when the high heels start quickly clicking away, they rush out to see who it is. They fumble around an explanation for who they are, claiming to be one of the names on the PI’s door, and Constantine calls Sara his secretary in a bad American accent, and she is none too pleased about that. 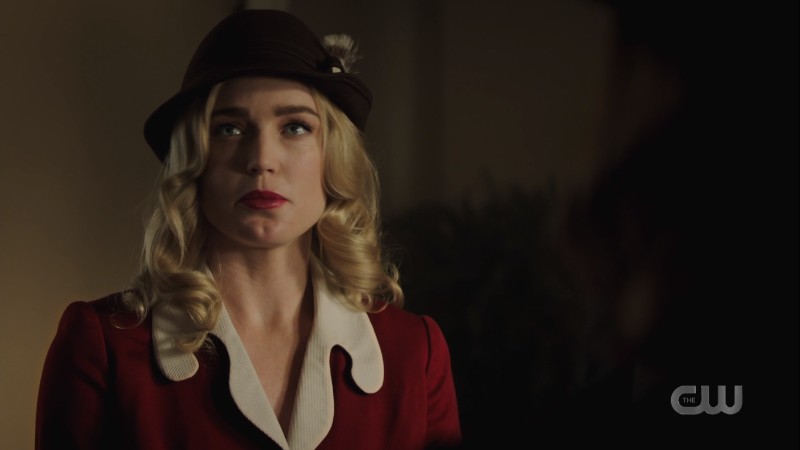 “Call me your secretary again and I’ll kill you with only a fountain pen.”

The woman, Jeanie Hill, pegs Ray as a cop, but he says he’s undercover and can help her. Jeanie explains that her boyfriend Bugsy, aka Benjamin Siegel, is a real bad guy, yasee, and he’s got the PD in his pocket. And the thing is…Bugsy died. But he mysteriously came back bigger and badder than ever. More ambitious. Fearless. Plus, he has a magic gun.

Jeanie says she’s scared, so Sara tells her to get out of town while they deal with this, and Ray gives her money to do just that.

As soon as Jeanie is gone, Constantine tells Ray he got got, but Sara says that’s not their focus right now. They have to go to the Blue Iguana and stop Bugsy.

Sara calls her QB team to the field, and Ava is so delighted to be of service. 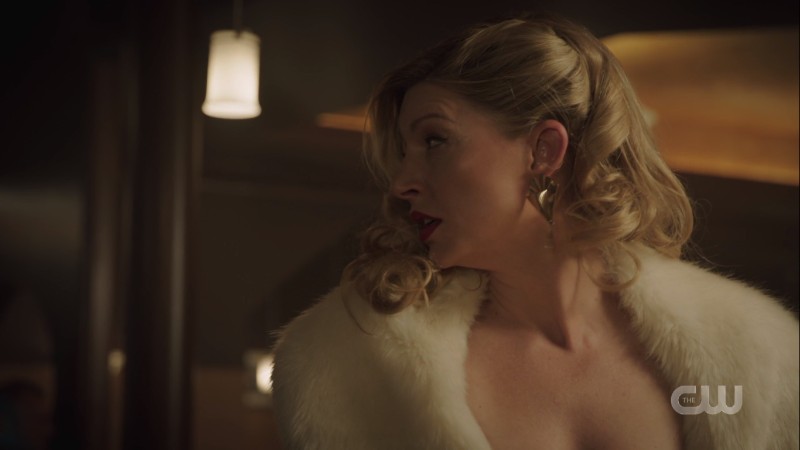 Would start a mob just to make Ava my mob wife.

She gives Sara the lowdown but Mick tells her to chill out; they’re second string in this mission, she doesn’t have to work so hard.

Not long after arriving at the Blue Iguana, Sara notices Jeanie come in and that she seems awfully chummy with Bugsy. They make eye contact and Jeanie meets them in the hallway and explains that it’s a bit more complicated than she let on. The thing is, this blackmail…includes her. She was used as a pawn to get powerful men and women in compromising positions so Bugsy could photograph them. Jeanie is upset; she always wanted to be famous, not notorious, but she doesn’t see a way out of this.

Sara does, though. She wants to set up a honey trap of her own. So she takes off her hat and puts on her flirty face and gets Bugsy to come to her in two seconds flat. 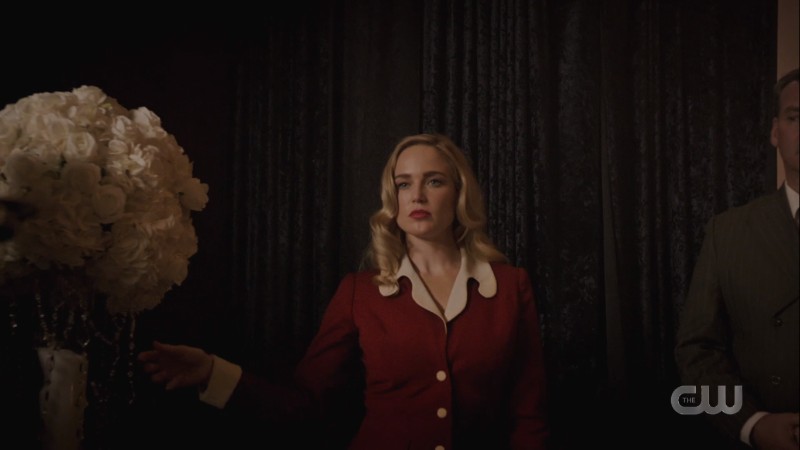 She threw that hat and my heart in one fell swoop.

And I mean, can you blame him? 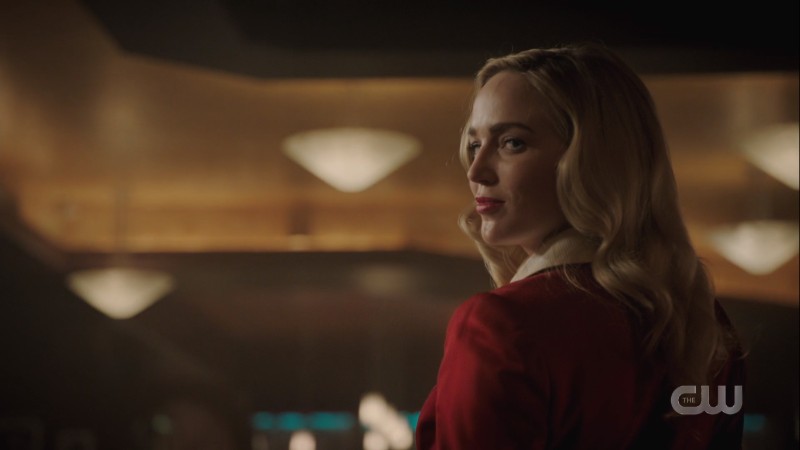 Call me Winnie the Pooh because I’d fall right into this honeypot.

Sara says she’s a gossip columnist and has some scoop for him so he follows her outside, but there are gangsters waiting for him out back. Sara steps aside and watches as Bugsy gets lit up by machine guns only to smile and shoot his hellfire gun at everyone, obliterating them all.

The police arrive and take him in before the Legends can apprehend him, but Bugsy is smirking; he knows he won’t get jail time. But Sara sends Ray in his cop uniform downtown to make sure he won’t get away either.

Back in 2044, Behrad is talking about his coursework at dinner while his mother pries into his dating life and Nate drools over Zari. Zari is rightfully creeped out by him and everything is awkward, especially when Nate foolishly mentions the air totem that’s in a painting that he knows full well the family thinks was stolen but is actually on Behrad’s wrist. Nate is such a dope.

Sara is back on the Waverider, but when Ava asks her if she should come back, too, Sara tells her to stay at the club. Sitting and waiting isn’t exactly an activity Director Ava Sharpe is used to, and Mick can sense she’s getting antsy. And is maybe not the best person to help her through this feeling.

Honestly I wish I could describe the next scene to you in detail but my notes for the entire thing are, “Constantine says they need Bugsy’s gun. Sara is wearing a tank top.” 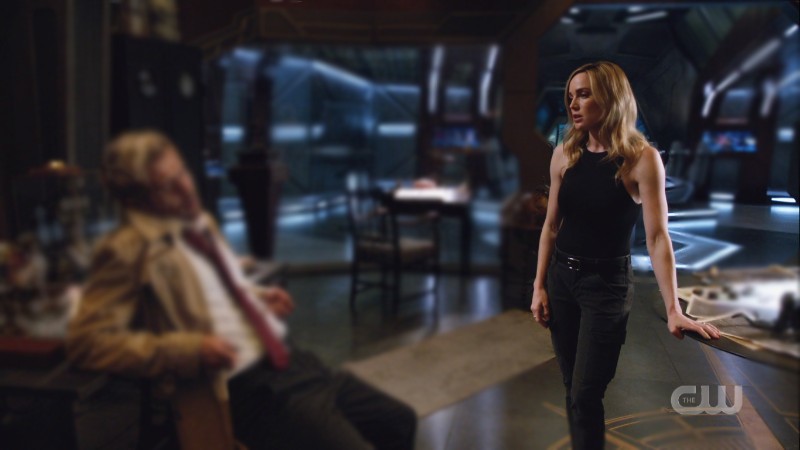 I haven’t had this much fun with the blur tool since the Cape Tricks days of Supergirl.

But I can’t imagine I missed anything particularly significant. If I did, blame Caity Lotz’s arms.

Officer Ray goes to the LAPD station and sees Bugsy having a meal and a laugh with the cops who were supposed to arrest him. Ray is approached by a guy named Sullivan who seems to be on Ray’s side of things, and they decide to team up to take Bugsy down.

Back at the Blue Iguana, Ava is starting to drink her feelings of being directionless and useless away when Sara calls in and asks her to help clear the bar out. Finally having a task to do, Ava gleefully leaps into action.

When Sara and Ray get to the Blue Iguana, after a failed attempt to get the gun from Bugsy, they find Ava singing Poison about 40 years too early. She has backup singers and perfect lighting and she doesn’t change the pronouns and it’s perfection. 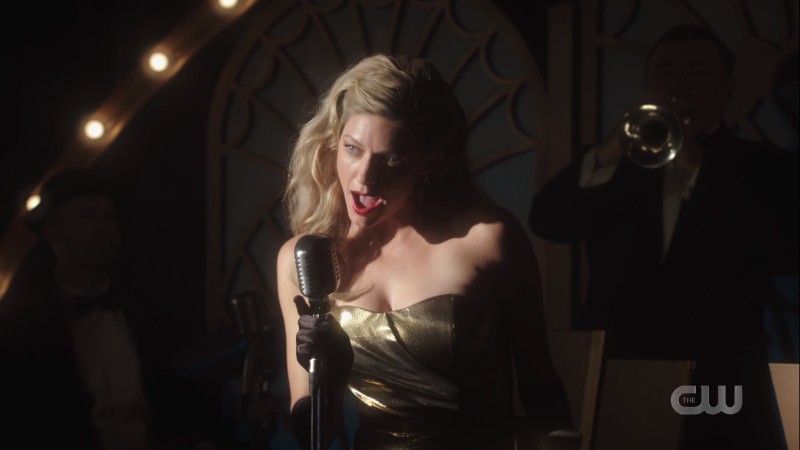 Jes Macallan is a goddamned GIFT.

That is, until we cut to what everyone who ISN’T Ava is hearing/seeing, which is a drunk woman slurring an off-key version of a song they’d never heard, though they have no way of knowing her “bad” version is still better than the one by Will Schuster and the Acafellas. 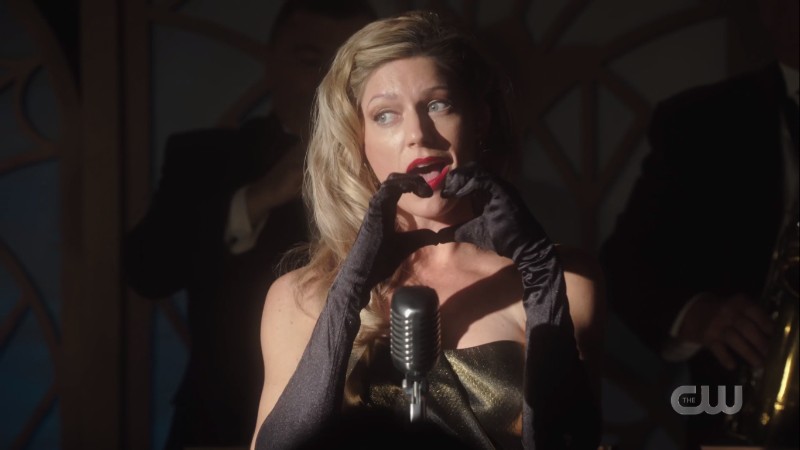 I love a hot dork.

The bar starts to clear out as the grumpy patrons boo and leave. Some girlfriends might have been embarrassed, or annoyed; this probably isn’t what she had in mind, and Ava probably shouldn’t be drunk on the job. But Sara is just…SO proud. 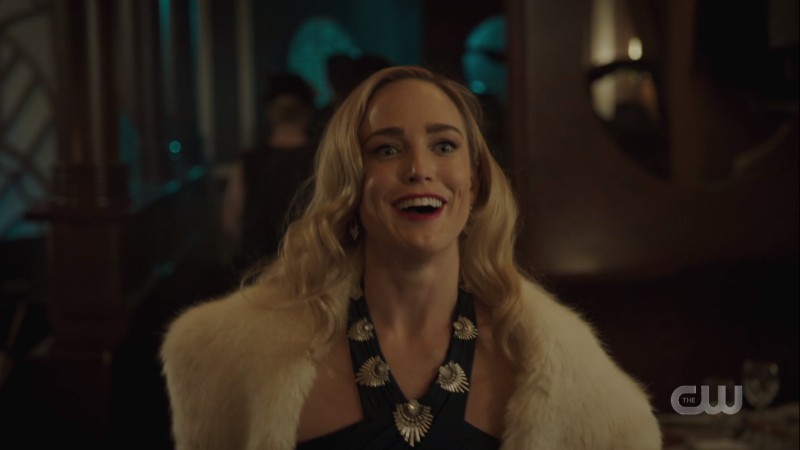 I have never seen such pure delight on Sara Lance’s face.

And what’s funny is, I have to imagine that on some level, Ava knew she wasn’t a great singer, because this was her plan to empty the place all along. Which makes it even more perfect. 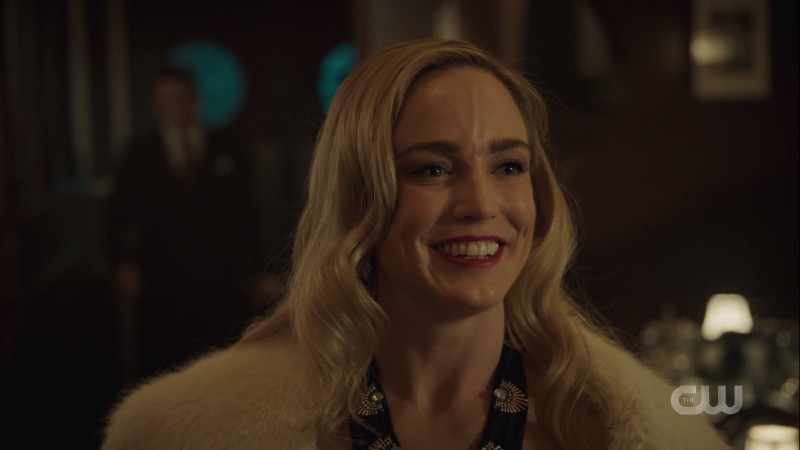 If your significant other doesn’t look at you like this when you’re doing a thing you love, even if you’re bad at it or if they don’t understand it, walk away now.