Welcome to Autostraddle’s APIA Heritage Month Series, about carrying our cultures from past to future.

We pray to our ancestors asking for guidance and protection. So rarely do we imagine our ancestors to be younger than us. When my little brother unexpectedly passed away last November from cancer, he became the youngest ancestor I’ve ever known.

It started with a missed call and finding out that he was in the ICU. Several BART and bus rides later, I made it to O’Connor Hospital where he was born 22 years ago and would die four days later. See, grief doesn’t start in the present. It starts in the past, right with all the shoulds and could have beens. The frantic replaying of everything that has happened on double the speed, skipping from one frame to another in a wild hunt for answers. Why did this happen? Why couldn’t I stop it from happening?

That week in the hospital, I felt pain at every sight of him lying in that bed. His body was swollen from head to toe, especially his face. He lied prone with a tube down his throat to stabilize his breathing. He was covered in wires that monitored his vitals. We called Cha[1] to xức dầu cho em Nguyên[2] and prayed incessantly. My prayers carried manifestations for his recovery with no doubt in my mind that he would make it through, but by the end of the week, I learned that some things just can’t be manifested.

If death is a silent reaper, grief is the piercing wails of everyone I love in the same room, desperately clinging to a body that no longer carries a soul. It is giving myself 3 seconds, if even that, to let the news sink in before rushing over to hold my mom, already collapsed on the couch and wailing repeatedly, “Ta không chịu được đâu… Nguyên đâu rồi? Nguyên đâu rồi?”[3] It is forcing myself to be strong though I am in indescribable pain, because the elders who have always been my pillars of strength have crumbled.

I let my face drown in tears as I explained his death over and over again in Việt[4] and English to everyone that came—and over the phone to everyone that couldn’t. As we viewed his dead body for the first time, we soaked our love into him through tears and prayers, clutching onto whatever life was left. I held his hand until it grew cold, making a promise loud enough so my mom wouldn’t feel alone in speaking to the dead. I promised him that I would take care of our family and make sure everyone was good. I tried to reassure his spirit in case he was scared of what lay ahead—but how could I possibly provide him guidance for somewhere I’ve never gone?

For the next several months, I replayed this nightmare of his death and cried my heart out every night. Gut-wrenching sobs tore through my chest and became my lullaby. They drenched my face in tears and snot, making it hard to see or smell anything no matter how many tissues I used. I didn’t care for connecting with my senses anyway though. I was trapped in a spiral, thinking, If I had known he was sick, I could have protected him. But the truth is that no one knew he was sick, even himself and the doctors, until it was too late. I refused to accept that he had passed away even though I spent every day handling logistics about his death. I learned how to plan and negotiate the cost of a funeral and close out financial assets of someone without a will. I offered comfort to others as they processed his death, though I didn’t have space myself to scream. I needed to break down, open my mouth wide, and release the thunder from the bottom of my lungs in one loud, piercing cry. I’d just lost one of the most important people in my life. With every message, call, and saying of chia buồn[5], the sadness multiplied rather than divided. It added anger to the equation, and I was angry that I was alone. I was alone in a world that “could not imagine” my grief even though I was waving it right in front of their faces.

I dove into stories that his friends, students, colleagues, teachers, family, and I shared. He was down for anything: hanging out, completing silly dares, and staying up late to listen and give advice. He built a magical haunted house for his students to enjoy on Halloween and looked forward to helping with their homework. He paid attention to the little things and always made sure to take care of set-up and clean-up at events because he knew how much it helped.

Through these stories, I called upon his spirit to give me strength, and this is how his past became the guide for my future. It became impossible to forget how much he loved and believed in me. Every story about him from the people in his life was a love note he had left for me—to guide me day by day. They reassured me that people remembered so much about him and wouldn’t forget him. They reminded me of how far the impact of his kindness and service went. It was the proof I needed to know that although I couldn’t follow him into the afterlife, he was settling in just fine as an ancestor. I didn’t have to worry about him so much anymore.

As the tasks for my em[6] dwindled down, the relief of not having to deal with them anymore mixed with a different kind of heartache. Carrying what remained of his world on my shoulders wasn’t easy, but letting it go felt even harder. I feared that there would be nothing left for me to do for him. If there was nothing left I could do as his chị[7], then what do I do now? How do I live when the one I always guided in life no longer needs me? How do I move forward when I still need him to support me as an ally when it comes to queerness, mental health, and social justice in our family?

In trying to figure it out, I cried, prayed, and wrote a lot. I prayed for the peace and protection of his spirit, for guidance, and for my family and me to be okay. To balance out the tears, I soaked up laughter whenever it came. I changed my phone’s wallpaper to his photo. I hoped he would visit my dreams though I never knew if I would wake up the next morning. Nothing made me sure that I would be granted another day because he wasn’t.

Yet somehow, the mornings kept greeting me.

As much as I still don’t know how to live life without him, I know I just have to keep going. While he was alive, he hoped for me to be well, live my best life, and always find happiness. I can’t imagine that he’s changed his mind now that he’s an ancestor. So for today, I choose to focus on that. Maybe tomorrow, I’ll choose something different. But I hope one day, when it’s time for us to finally reunite, I can share with him that all his hopes came true. 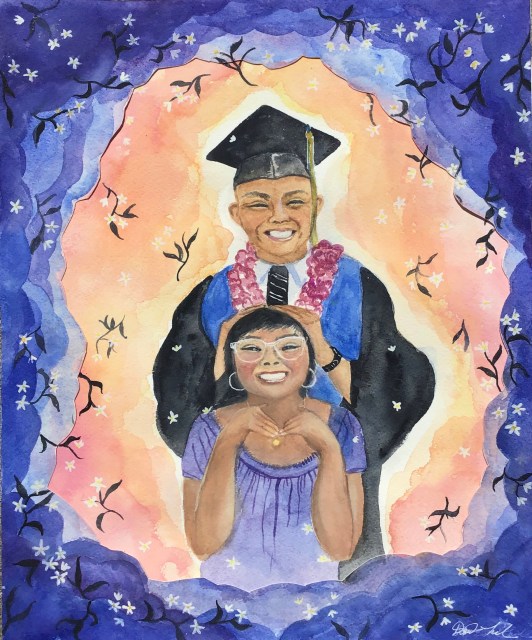 Artwork by Danthanh Trinh depicting An and her brother Nguyen on his graduation day.

An Bùi is a writer, community organizer, and facilitator who loves to embrace the complexities of her emotions through laughing and crying. Through her writing, she explores the lens of daughterhood, living in San José as a queer Việt artist, and navigating the grief of losing her younger brother. Social justice and spirituality are the pillars that guide and inform her work. She dreams about a world where care exists on a structural, community, and individual level. Her work has been featured on Autostraddle, QTViệt Cafe, and more. Follow her journey on Instagram @anonymousbui

An has written 1 article for us.