It’s always scary coming out as trans, but I can only imagine how much harder it must be if you’re in the spotlight like LCD Soundsystem’s Gavin Russom, who came out as a trans woman today. But what’s much harder for most of us is living an inauthentic life, and that seems to be the case with Russom, as she told Pitchfork, “Over the last year and a half, I went from my trans identity being something I was in touch with and worked through in one way or another, to suddenly this shift where it’s on the front burner. Now it’s time to become a whole person.” Congratulations, Gavin, we’re so happy to see you living your life and being yourself and we’re happy to have you as a sister. We all can’t wait to see what wonderful new things you do now that you don’t have to hide who you are! 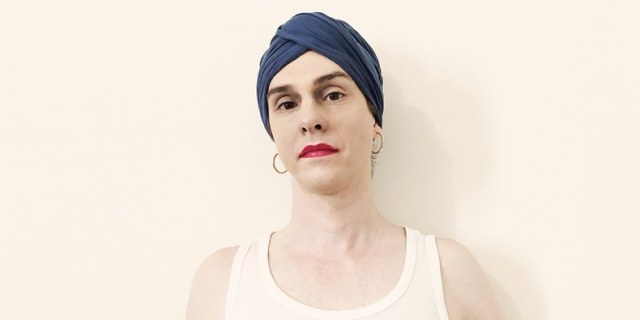 Russom has been one of the most respected synth players and DJs in all of electronic music for several years, and has been an official member of LCD Soundsystem since 2010, but worked with them for yours before that. She’s designed synths for other musicians and released music with Delia Gonzalez and the Crystal Ark and her own music as Black Meteoric Star. She earned the nickname The Wizard because she’s a trailblazer when it comes to building custom synthesizers for herself and other musicians. Russom talked with Pitchfork in a long and open phonecall about her decision, her life and her future.

“There was legitimately something unmanageable for me about living as a cis man. I was working so hard just to present this image of myself that ran very deeply counter to who I really am. There’s nothing theoretical or intellectual about that. It’s the physical thing in my body,” Russom said, talking about how, at the age of 42, she just couldn’t stand living as a man anymore. She also detailed experiences of harassment and assault while she would dress femininely or androgynously earlier in her life, a common experience for many trans women. Russom thanked trans women of color for doing the work necessary to make the world a safer place for someone like her to come out. She talked about being helped by people at the clinic she went to, how great it felt to be gendered correctly, and how helpful it was to talk to other trans people in her own journey. “I think the most helpful thing was talking to people with different transgender experiences, especially those with upbringings, economic circumstances, and ethnic backgrounds different than my own. It allowed me to hear all these different perspectives and see the ways in which the trans experience is so varied and so individual. But also, there are certain things that seem to be common threads.”

Russom will perform her first DJ set openly as a trans woman on July 13 at Femme Room, a “popular monthly party celebrating femme and queer culture” in Chicago. After that, she’s performing with LCD Soundsystem as they headline the Pitchfork Music Festival than go on tour. Again, congratulations Gavin, this is a great day, a happy day and a day to celebrate. We’re so happy for you and wish you all the best!