About 45 minutes into the debut episode of Claws — TNT’s woman-led summertime nail salon/organized crime dramedy — Desna Simms (Niecy Nash) finally has a moment to herself. The manicurist, who has seemed impenetrable up until now, sits quietly on the toilet in her outdated bathroom, the emotions playing out on her face.

The new year had begun filled with such promise. Her loyal friend, Polly (Carrie Preston), has been released from prison and returned to her rightful place at the Nail Artisan of Manatee County salon. Desna fulfilled her commitment to her boyfriend, Roller Husser (Jack Kesy), to launder money for his pill mill operation for a year, and she awaited the bonus he’d promised. The bonus would be enough to cover the deposit on her dream nail salon in upscale Sarasota. A better life for her and her autistic brother (Harold Perrineau) finally seemed within reach.

And then, the rug gets pulled out from under her.

Polly’s prison sentence has left her penniless, after she was forced to pay restitution for her crimes. Roller’s boss/uncle, affectionately known as Uncle Daddy (Dean Norris), had made her no promises, so instead of a $20,000 bonus, Desna’s thank you for a year of service was just “three funky thousand dollars.” Her only recourse is to stick with Uncle Daddy and the Dixie Mafia until they open more clinics. Whenever Desna does get her money, it’ll be too late to secure her dream salon whose deposit is due in a few days.

She’s forced to take on a greater role in the existing clinic — acting as muscle in the face of a threat from some Russians — while Roller takes all the credit. While she gets shortchanged, he gets lavished, earning the keys to a luxurious beachfront estate, one almost identical to one she and her brother imagined for themselves. And, if that wasn’t enough, the former stripper Desna just hired to work at the salon is sleeping with her boyfriend.

The weight of it all is just too much for Desna and, in the quiet solitude of her bathroom, she breaks down. When her brother interrupts, shrieking that “it’s raining in the house again,” her anger boils over, “Can I just get two seconds to myself, Dean?!”

It’s a compelling scene — one that fans of Nash have been waiting for years to see. The perpetualy effervescent actress has been a fixture in Hollywood since the late ’90s but throughout her career, she’s been pigeonholed as a comedic actress. And while she’s exceptionally good at that — she stole the show on Getting On and was the highlight of Scream Queens — fans have been clamoring to see her try her hand at the dramatic. Nash excels here.

Nash’s performance is buttressed by an incredible supporting cast.

This show features more artistic shots of manicures than the #NailArt tag on Instagram.

As Polly, Carrie Preston looks like the unassuming suburban mom who organizes the school bake sale on behalf of the PTA, but the monitor that’s attached to her left ankle betrays a different story. Claws employs storytelling similar to Orange is the New Black to give us insight into Polly’s backstory, but with one big difference: Polly isn’t a reliable narrator.

In the opening episode, she explains her absence from the salon by telling the new girl that she’d been on vacation in the South of France, at the personal invitation of novelist Judy Krantz. By the second episode, Polly tells a captive audience of teens, sans accent, that she was once the head of a modeling agency that was a front for an upscale prostitution ring. As she files the nails of a bridal party in the third episode, she recalls her first marriage, at age 14, to the leader of the Symbionese Liberation Army. None of it is true, of course, but one thing is clear: whoever the real Polly is, Polly does not want to be her.

Three episodes into Claws and we’re only scratching the surface of Jennifer (Jenn Lyon), Desna’s best friend and trusted right hand. The one-time party girl and recovering addict has transformed into a caring wife — her husband is Roller’s older brother, Bryce — and mother to two. She’s fiercely loyal to her friends and family, ready to pounce on any perceived threat. But, already, as her involvement with the clinic deepens, Jen’s tenuous grasp on her sobriety is starting to slip.

“Do you think we’re gonna be stuck in Husser-ville forever?” Jen asks.

“I know we won’t,” Desna answers firmly, willing herself and Jen to believe it.

“That family is like quicksand,” Jenn replies, without acknowledging that the family she fears is her own. “The more you struggle, the more they just suck you in.” 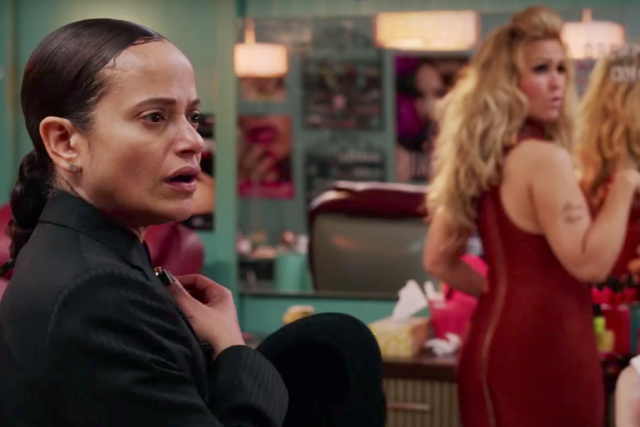 Judy Reyes’ physical transformation into Quiet Ann, the butch lesbian that handles pedicures and security at the salon, is a sight to behold. Even for fans of Reyes’ previous roles on Scrubs and Devious Maids, she is barely recognizable as Ann. There is, admittedly, some disappointment that Ann’s not played by someone who presents more masculine-of-center, given the dearth of roles available to those women, but, thus far, I’m impressed with her portrayal.

Ann remains an enigma through three episodes. Thus far, we know that her backstory includes a stint in prison and, more surprisingly, a six-year stint as the wife of a male Yale linguistics professor. Remarkably, though, even in the absence of dialogue, Ann manages to charm and captivate, perhaps too much for the married client with whom Ann spends New Year’s’ Eve who now stalks her across Manatee County.

And then there’s the stripper, Virginia (Karrueche Tran), who’s managed to snake her way into Desna’s salon and, ultimately, into her boyfriend’s bed. She’s still a relative unknown in the salon but her ambition earns her some respect from Desna initially. “She kind of reminds me of me,” the salon owner admits. What eventually drives a wedge between Virginia and Desna isn’t her affair with Roller, it’s that she outed Polly’s probationary status. It’s clear that the thing that Desna values most is loyalty. Virginia has shown none of it, so Jen tosses her out of the salon, literally.

Virginia earns her way back into Desna’s good graces in a major way and is ultimately welcomed back into the salon. After a lifetime of not being able to count on anyone but herself, she struggles to trust Desna and the members of her crew, but you can tell that Virginia wants nothing more than to belong.

If this show decided to take the stories of these women — these flawed and ambitious women in the service industry, portrayed by these actresses — and just tell them, it would be a show worth watching. But, far too often, Claws doesn’t do that, as if these nuance portrayals of these flawed women couldn’t sustain a show. More often than I’d like, the show bends towards the garish and cliche for reasons surpassing understanding.

On some level, I get it: this is Florida and if ever there was a place that lent itself to garish and cliche, it’s Florida. And perhaps this story is only possible in Florida, where non-existent regulations (yay, small government!) allowed pain clinics to become pill mills, handing out oxycodone to addicts like candy. But, at some point, it just becomes a distraction.

Spencer’s TWIN was A? COME ON.

No one embodies that garishness better than Uncle Daddy who we first meet on New Year’s Eve in the back of his strip club, She She’s (no, really, that’s the name of the club). Draped in gold chains and rosaries, he snorts coke and slurps oysters, as he and Roller celebrate the financial success of their pill mill. The shifts between that Uncle Daddy, who’s almost a parody of every mob boss you’ve ever seen, and the moments when we’re supposed to take him seriously as a threat to Desna, are so jarring that it takes you completely out of the story.

There could be an interesting story to tell with Uncle Daddy — a devoutly Catholic, bisexual crime boss in an organization called the Dixie Mafia is probably the most complicated narrative for a male villain since Omar Little ran the streets of Baltimore on The Wire — but Claws uses Daddy’s sexuality for cheap laughs. Given that the creator and head writer of Claws, Eliot Laurence, was once a writer and executive producer for The Big Gay Sketch Show, I expected better.

Part of me thinks that Laurence saw similarities between the premise of Claws and the premise of Breaking Bad — that is, a protagonist that gets involved with the drug trade in order to support their family — and sought to distinguish one from the other. So Claws ends up with a second line of twerking strippers as part of a character’s funeral procession and Quiet Ann chasing bare-assed addicts around a parking lot, as a way to prove that Claws is a different show. It’s all completely unnecessary. Breaking Bad is not Breaking Bad if Walter White isn’t a white man cloaked in respectability. You share that narrative through the eyes of a struggling black woman, a recent parolee, a recovering addict, a lesbian and a former sex worker, and the story changes completely.

Still, at its heart, Claws is a show about five compelling women — Desna, Polly, Jen, Quiet Ann and Virginia — and how they navigate a world in which they aren’t really meant to succeed. It’s a show that pays tribute to sisterhood and how it can thrive under the harshest of circumstances. The show errs in its audacious moments, which seem crass for the sake of being crass — but there’s enough relatable material on Claws to make enduring those moments worthwhile.