With DOMA making its way up through the courts, every lawsuit seems to bring the law one step closer to its repeal. On Tuesday, a gay woman filed a class-action lawsuit against her employer, St. Joseph’s Medical Center, and their insurance administrator, Blue Cross Blue Shield, for denying her wife access to medical coverage. The lawsuit seeks to determine whether St. Joseph’s, a Catholic hospital in Yonkers, violated a non-discrimination clause of the Employment Retirement Income Security Act (ERISA) and goes after the constitutional of DOMA.

Despite her October 2011 marriage, the woman — who filed under the pseudonym Jane Roe — was rejected by her Human Resources department when she petitioned to add her wife, Jane Doe, as a dependent to her medical benefits plan. Since last year’s Marriage Equality Act, most employers who sponsored group insurance programs were required to extend benefits to the same-sex spouses of their employees. As a self-insured company, however, St. Joseph’s is subject only to federal laws regarding health care. With the freedom to flaunt state law and DOMA firmly on their side, St. Joe’s created a plan that “expressly excluded” “same-sex couples as eligible dependents of the Plan’s participants.”

And that’s just the state versus federal squabble. Lawyers for the couple have said that they believe their case is the first to sue a Catholic institution in concert with DOMA; most have been against the federal government. The president of the Catholic League, Bill Donohue, sees the lawsuit as an infringement upon the rights of the Church. “It is not the Catholic Church that is seeking to impose its agenda on others. It is homosexual activists who voluntarily join a Catholic institution and then seek to upend its strictures.” While it’s regrettable that Mr. Donohue can’t be just a little more lower case “c” catholic, the separation of church and state does bring another dimension into the case.

The concern — that allowing the government to force one group of people to change their ways will only pave the way for totalitarianism — is understandable. Call me crazy though, but I’m less concerned about the actions of a democratically-elected and historically-if-slow-moving-progressive group of officials than I am about the unchecked power of an all-male institution that has held sway for hundreds of years.

Moreover,  the non-discrimination clause in ERISA, which is virtually the only insurance laws that bind St. Joseph’s, applies to all people who are eligible for employment: gays, Catholics, and gay Catholics alike. And that’s what Jane Roe is pushing for. “I’m not just thinking about our particular situation. I’m also thinking about the folks who are behind us, the younger people in their 20s and 30s, who are thinking about getting married and who are going to have the same problem. It’s just not socially fair.” 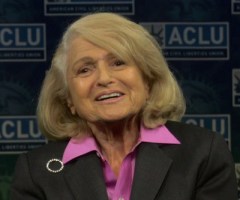 The lawsuit builds on the precedent set by Edie Windsor’s victory, the recent decision by Massachusetts’s Federal Appeals Court that found DOMA unconstitutional and Karen Golinski’s ongoing case against the U.S. Office of Personel Management. It’s especially relevant in a time when economic concerns continue to run so deep that social issues are often written off as “distractions” from the real issues. For those of us who live non-normative lives, these distractions are our realities. Finding health care in a system that’s antagonistic to our existence only makes it harder for us to live productively, which in turn puts a strain on our communities. If the case is successful, we stand to gain more than just insurance, we can continue to thrive.