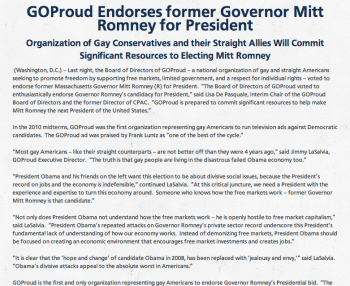 Yesterday, conservative political group GOProud, which claims to be a group comprised of actual homosexuals, announced that they’d be endorsing Mitt Romney for president. Yup. This isn’t really a huge surprise, as GOProud is constantly pulling evil stunts which harm their alleged brethren. Highlights of their press release include:

“President Obama and his friends on the left want this election to be about divisive social issues, because the President’s record on jobs and the economy is indefensible. At this critical juncture, we need a President with the experience and expertise to turn this economy around.  Someone who knows how the free markets work – former Governor Mitt Romney is that candidate… [Obama] is openly hostile to free market capitalism. President Obama’s repeated attacks on Governor Romney’s private sector record underscore this President’s fundamental lack of understanding of how our economy works.  Instead of demonizing free markets, President Obama should be focused on creating an economic environment that encourages free market investments and creates jobs.”

There’s something strangely sad about GOProud’s existence in the first place, which seems to be fueled by a healthy dose of “internalized homophobia and self-loathing” and “the plutocratic worship of wealth maintenance above all else.” When MetroWeekly hit up the GOProud party at the 2011 Conservative Political Action Conference, they garnered this telling soundbyte from a GOProud volunteer named Matt Hissey:

“I don’t really like gay people that much… gay people frustrate me, the stereotypical gay people, they frustrate me… like someone who acts like a complete, who puts on a total act, I understand some guys are feminine which is fine…but they’re like, straight acting, and then the next minute they’re jumping up and down, it just frustrates me. The whole conservative thing is  be yourself, be an individual, and just don’t be something that you’re not and if somebody does or does not accept you, that’s fine, but don’t change who you are to look different to others.”

Speaking of CPAC, GOProud’s endorsement of Romney and alliance with the right wing seems even more disturbing when you consider that the group, headed by rich white men Jimmy LaSalvia and Christopher R. Barron, were purged from this year’s Conservative Political Action Conference after volunteering to co-sponsor the event, as they had done for the last two years. Organizations such as the Family Research Council, NOM and Concerned Women for America had boycotted previous CPACs due to the inclusion of GOProud. In an interview with CNN about their exclusion from the event, Barron said the following:

“The whole time that we’ve been involved in CPAC we’ve said the most important thing was unity within the conservative movement. there have been a handful of organizations on the social right who have decided to go the route of division… and decided to boycott previous CPACs. Even though we weren’t invited this year and we were informed that we were not allowed to participate, we haven’t gone that route, we haven’t been organizing a boycott because we understand that in this election year, the most important thing we can have is unity within the conservative movement.”

no thanks i have a root canal to get to

LaSalvia and Barron were both working with the Log Cabin Republicans until 2008, when the group’s refusal to back Bush in ’04 and the slim margin by which they endorsed McCain inspired the twosome to break off from LCR and start GOProud. Despicable human being Ann Coulter now serves on their board of advisors and headlined their “Homocon” event at the Republican National Convention.

But perhaps most damaging of GOProud’s many delusional assertions is the conviction that Romney’s positions against social policies like gay marriage and same-sex parent adoption are his only genuine drawbacks for our community.

To take just one of many examples, Romney presently maintains that if he is elected, he will repeal the Affordable Care Act, which has numerous benefits for LGBTQ people specifically, including the fact that many insurance-prohibitive “pre-existing” conditions disproportionately affect LGBTQ people, such as HIV, depression, alcoholism and breast cancer. Without marriage rights, gay and lesbian couples are often unable to add their partners to their employer’s health insurance plans. Without employment protection for gay and transgender citizens, many LGBTQ people are more likely to be fired without cause or be harassed at work and thus more likely to lack insurance.  Homeless LGBTQ youth (it’s estimated that 40% of homeless youth are LGBTQ) are in desperate need of adequate medical care and are the least empowered to acquire it. Romney supports defunding Planned Parenthood, a distinctly queer-friendly organization that provides free or low-cost health care to millions of uninsured women, lesbians among them. Romney also supports abstinence-only sex education, programs which contribute to the alienation of queer and transgender teenagers and have been proven to usually contain inaccurate or misleading information. He has vetoed $220K of state-run homelessness projects and supports faith-based social services, which often exclude LGBTQ youth. GOProud doesn’t even pretend to care about transgender folks, however, so I doubt they’re concerned with the particularly damaging effect conservative policies have on the “T” part of LGBT.

Clearly the GOProud cronies aren’t concerned about Romney’s intent to reduce income tax on the top 1% from 35% to 25%, which is the opposite of what this country needs. Most wealthy LGBTQs are ready and willing to see a tax hike if it means overall betterment of the LGBTQ community, but these guys don’t give a shit.

When GOProud made the decision to out Rick Perry’s campaign advisor Tony Fabrizio, LaSalvia tweeted: “I’ve just about had it with faggots who line their pockets with checks from anti-gay homophobes while throwing the rest of us under the bus.” (Presently, GOProud is furious that Dan Savage inanely volleyed the same highly inappropriate insult their way yesterday.)

Anyhow, speaking of getting thrown under the bus — for decades, queer people have been fighting for social acceptance and civil rights. We’ve been marching and protesting and educating and organizing political actions and pushing for the media representation and local communities that have the potential to empower LGBTQs everywhere. So much has changed thanks to the strength and courage of anti-Conservative activist queers. So you’re welcome for that, GOProud, and feel free to return your toaster at your earliest convenience.