There are a lot of ways you know Lauren Morelli: As a writer on Orange Is the New Black, as the wife of heartthrob Samira Wiley, and now as the showrunner for the reboot of Tales of the City — which landed on Netflix just in time for the tornado of rainbows usher in Pride. Lauren came to A-Camp this year to chat with Brittani Nichols, and she also hopped on the phone with me to talk about the rewarding and terrifying things about adding to a series as iconic as Tales.

Spoilers below for Netflix’s Tales of the City.

I had actually never heard of Tales of the City, and I felt a lot of queer shame around that when I got involved with the project. There’s a generation where this series is a really important representation milestone for them, and then there’s a sort of generational drop-off. When I went back and read the series, I was really struck by the fact that Armistead Maupin, in 1978, was writing about queer life and love in a way that wasn’t traumatic or over-sexualized, just queer people living their lives, and that’s something we still don’t see enough of today.

That was the hardest thing, certainly, to try and do. How do I honor the fact that I get to tell these stories because of the work and activism people like Armistead have been doing for four decades before me, while turning my head in the other direction and honoring the fact that there’s a generation of queer people coming up behind me whose interactions with their queer identities look and sound and feel very different than mine? How do you expand the point of view in both directions so it includes all of those things?

No big deal, just having a conversation that includes all queer identities from all generations.

[Laughs] Right! But I was lucky, because a lot of those conversations were already inherently in place. In terms of the executive producers, it was me, who had never heard of Tales before; Alan Poole, who directed three episodes and produced the original, and has been such an important voice in gay content for a long time; Armistead; and Laura Linney. I started by listening to what it was like, in 1993, when the mini-series came out, about marching in the Pride parade in San Francisco as Congress debated whether or not the show could even air on PBS because of the federal funds that were directed to public television. It was a humbling experience.

You had an all queer writer’s room, right?

Yes, and that’s when I started pushing the conversation in the other direction. I’m a 36-year-old white cis queer person. I knew if I was going to put six bodies in this room, they needed to represent six very different queer experiences from mine — and understanding, even then, I’m only getting a tiny fraction of the myriad experiences in our community. We are so desperate for representation that when we get even a tiny droplet, we’re like, “Oh god, please just let me see myself in it.” And when you don’t, or when you see part of yourself but it doesn’t reflect the fullness of your intersecting experiences, it’s feels so disappointing.

I think it’s really brave to try to work out a lot of that intergenerational tension on-screen. The conversation Ben has with Michael’s friends who lived through the AIDS crisis, I’ve rarely, if ever, seen something like that on TV. How does it feel to be doing that?

It’s exciting and it’s an honor and it’s fucking terrifying.

[Laughs] Of course! My favorite thing about this series is your willingness to let these characters be messy, to do messy things and say messy things, and yet you don’t shake them down to some lowest common denominator of “good” or “bad.” For nearly my entire career, the point of LGBT characters on TV has been to make them squeaky clean and lovable so straight people in real life will be nicer to us.

That’s exactly it. I think a lot about trying to get it “right,” and I’m putting “right” in air quotes, because I think that line can be very dangerous, and this is something I’ve evolved on as I’ve educated myself more and more about our community. I do not want to see two characters with marginalized queer identities having a conversation on-screen just to educate straight people. And I’ll give Netflix a lot of credit. In telling Jake and Margot’s story, for example: That relationship is something in my own personal community that’s happening all the time now. It feels important to talk about it. And Netflix never gave us any notes that said, “Oooh, I don’t think straight people are going to get this.” They trusted us to trust the viewers.

A hallmark of the original series is there are ten thousand stories going on at any given moment. You really honored that. Every character is going on their own journey. All the characters are going on relationship journeys with each other. And there’s this over-arching pulpy mystery. Did you have a like a murder board style story plotting wall in your house, all these headshots linked together with like a web of red thread?

Oh well, we for sure felt like it was going to kill us, in the writers room, keeping up with all of it. And trying to strike the right tone. The pulpy mystery is so important in Armistead’s original series. I knew we had to maintain it. But when have we gone too far? When have we not gone far enough? Does this seem insane? Striking the balance between fun and ridiculous is surprisingly hard. But more than that, knowing that the mystery centers a trans woman and is going to contain an entire flashback episode with trans characters and trans actors, making sure that the mystery isn’t going to be damaging to the community. 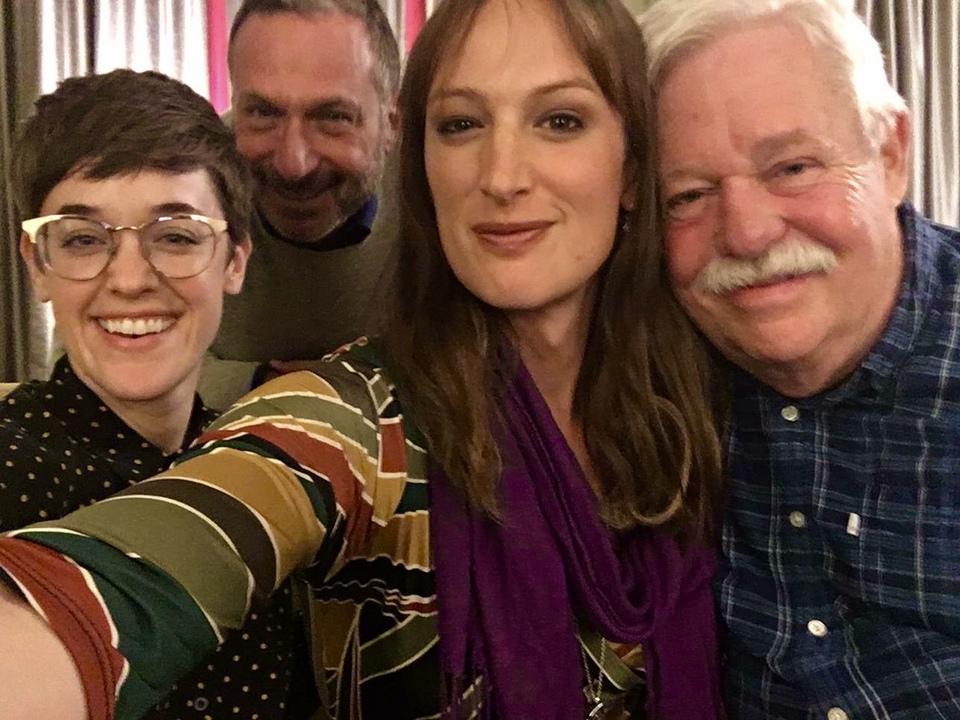 I do want to talk a little bit about that episode. Jen Richards is always transcendent.

Yes, I can’t get over how good she is. I knew going in, that to address the tension between what Tales was and what it needed to be, Anna had to be played by a trans woman, and the way we were able to do that was to cast Jen in our flashbacks. I had obviously just come off of five years on Orange Is the New Black, which is all small flashbacks all the time, but one of the other writers in the room said, “Let’s make it a whole episode” and so we made, essentially, a mini-movie inside the series. Watching Jen and Daniela Vega work together was a gift. My favorite moment of the entire series was the day we did the table read for that episode, watching them together, and the trans women we’d cast as their friend group, was so dynamic and wonderful.

You brought up Orange Is the New Black, which, in my opinion, completely changed the landscape of LGBT television. How have you personally experienced the sort of tectonic shift of the last several years in terms of representation?

Queer people getting to tell queer stories still feels revolutionary. When that happens, things don’t feel approximated or generalized. One of the most important things I learned on Orange is that very specific stories still attract a really broad audience. I also think there’s so much momentum around lots and lots of TV being made, so it feels like there’s a new kind of room for all of our stories. There are so many ways to love and be loved. Now we get to explore that.

I don’t know how the rest of the world will react to this but I love lesbian villains. My favorite joke on Tales is Michael saying, about the contractor, “She can’t be the bad guy. She’s a lesbian. It’s too cliche.” And then having the bad guy be a whole different lesbian.

[Laughs] I was really worried about that for a long time. I’m glad you liked it.

The more queer characters you have, the more queer villains you can have! If you could adapt another book series for TV, what would it be?

I know everyone on earth is adapting Nancy Drew right now, and I don’t know why I’d trap myself into another mystery, but I’m starting at my collection of vintage Nancy Drew books right now, and that’s such a fun world!

Happy New Year from this airport lounge in Tahiti where our flight is delayed, we’re deliriously tired, but also content and happy and excited to see what comes next. Love to you all ❤️

Your wife, Samira Wiley, maybe you’ve heard of her—

I have heard of her.

Do you think you’ll work together again?

Definitely. We loved working together, but it’s also been good for us to find our professional footing without going into the same space together every day. With a few years behind Orange now, we talk about it all the time.

I want to thank you, on a personal note, because at last year’s GLAAD Awards, where Samira was getting the Vito Russo Award, we were on the red carpet at the very end and they hurried y’all past all the smaller media after the big names got their interviews at the top of the carpet, and as the handlers were rushing you by, I yelled out “Autostraddle!” and you both stopped and turned around and smiled waved.

We love you guys.

And thank you for being in love on Instagram. It’s really important to balance out our “love is a lie” Vapid Fluff content.