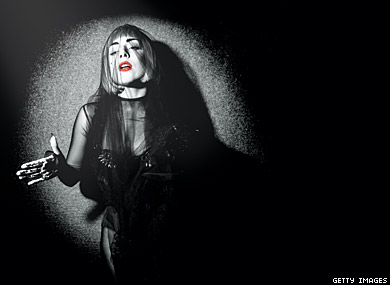 Lady Gaga’s interview in The Advocate is giving the media a lot of lukewarm feelings. The interview focuses mostly on Lady Gaga’s relationship to the gay community, namely the backlash coming from the community that her activism is just a sales tool:

“To say that I would use the gay community to sell records is probably one of the most ridiculous statements anyone can make about me as a person. I would say the top thing I think about every single day of my life, other than my fans, loving the music, and my family being healthy, is social justice and equality…Anyone who says that I’m not genuine is not interested in overcoming this fight.”

When asked if she considers herself an ally or part of the LGBT community, she says she ascribes “to the b letter.” On the difference between speaking at The National Equality March and performing in the Monster Ball Tour:

“As much as I love the fantasy of the Monster Ball, it is a fantasy; it’s a place to escape to. Whereas when I’m working as a political activist, we’re rooted in reality. We’re rooted in the reality of the fight.”

“Lady Gaga is not just a shameless self-promotin’, self-important, media-manipulatin’, Messiah-soundin’, outsider-liberatin’ pop music machine… no, no, no, Lady Gaga is a gay activist at heart… If you don’t like Lady Gaga then you are against gay rights, social justice, sparkler bras and for the killing of gay unicorns everywhere.”

What are your feelings about this unnecessarily-separated-onto-4-separate-pages interview?

Have you heard the one about the little Brittana peck that sent a million fangirls into a tizzy over the weekend? In honor of the last show of the Glee live tour in Dublin, they threw together a short skit, during which Brittany mistakes Blaine of being straight and is left alone without anyone to kiss (they put as much effort into that storyline as on the show, I see). Santana then jumps on stage to surprise her crush with a sweet kiss and the crowd collectively lost their ever-loving shit. See also: Kurt & Blaine kiss. 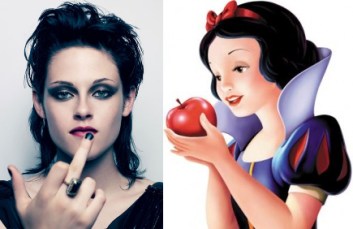 Girlfriend is jumping from one iconic role to the next by signing on for a new trilogy: Snow White and the Huntsman. Interestingly, rather than the competing film starring Julia Roberts, this film is getting the Lord of the Rings treatment and going for an epic three-film series.

In a twist to the fairy tale, the Huntsman (Chris Hemsworth) ordered to take Snow White (KStew) into the woods to be killed winds up becoming her protector and mentor in a quest to vanquish the Evil Queen (Charlize Theron).

Producer Joe Roth on why KStew was cast as Snow White: “I hope this is a movie that will appeal to those who find Twilight appealing, but also she is someone who has some piss and vinegar in her.” 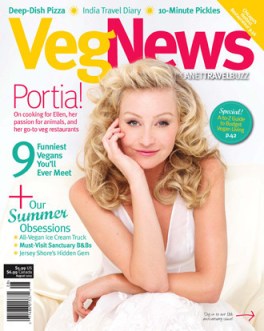 VegNews (not to be confused with Vag Magazine) exists… and Portia de Rossi is the July/August 2011 covergirl. Interestingly, she never spoke about being vegan during her book tour last fall and explains that she didn’t want people to see going vegan as further manifestation of an eating disorder. She also discusses how she finds being vegan more difficult than being gay:

“Listen, I think it’s more difficult to be vegan than gay. I think people have a harder time accepting it; people feel more uncomfortable with a vegan at their dinner table than they do a lesbian. It’s confronting. It’s kind of suggesting that what someone else is doing is bad or wrong, and it hits them on a more personal level. … If somebody is setting there eating a steak watching you eat polenta, they’re thinking that you’re trying to preach to them or you’re trying to convert them in some way. Whereas with being gay, I don’t think anyone’s concerned that that’s the agenda. “Hey, Mom, you also have to be gay. I’m gay and so should you be!” Certainly when I told her that I was vegan, it forced her to look at her habits.”

I ran into her at Dinah Shore last year. Just sayin’.