Is Lady Gaga kissing a girl? Lady Gaga has been photographed by the evil paparazzi doing sinful things on a boat in St. Tropez like possibly making out with a woman, therefore proving that just like the Vancouver Island Marmot, bisexuals really do exist. Often they can be spotted mating in the wild with women of various sexual persuasions. They’ve also been known to work for this website and read its contents.

Number One Feelings:
1. Lady Gaga has an amazing ass
2. Why is she pretending like she wants to get tan, that bitch was born to play the Snow Queen and we all know it
3. Who’s that lady, who’s that lady, sexy lady, who’s that lady
4. Is it possible they’re just cuddling, hugging, steamrolling, or providing each other with necessary body heat?
5. We love a girl who drinks regular Coke instead of diet
6. Lady Gaga drinks tea from a teacup IRL
7. zomg 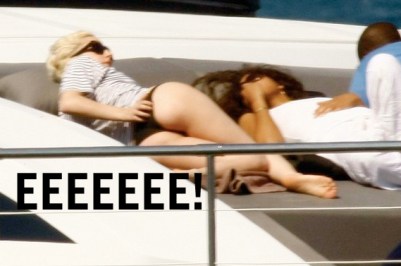 Sidenote – a conversation between the Editor-in-Chief and Executive Editor of Autostraddle.com:

Riese: if i headline lady gaga on a boat kissing a girl
will our readers completely give up hope
really it’s not my fault that lindsay lohan and lady gaga both maybe kissed girls this week
Laneia: you should say that
Riese: we typically avoid celebrity gossip
unless it’s about lady gaga
or lindsay lohan
Laneia: and then point them in the direction of the safe sex post
Riese: we talk about smart stuff 95% of the time right
my brain hurts
Laneia: 85%
Riese: 85%
that’s not bad
Laneia: no i’d say it’s really good
Riese: also part two of the feminist roundtable is coming up
Laneia: yes
Riese: actually everything we have coming up is smart
Laneia: mhm
Riese: do we actually care if lady gaga kisses a girl
Laneia: it’s pretty to look at
Riese: i am not sure that i care
Laneia: i don’t care, no
the reason people care about celebrity gossip or pretty things to look at is b/c the world is such a fucked up hole of fuckery most of the time. everyone’s in debt and overworked or unemployed and at the very least everyone just wants to go home
Riese: well, it matters a little
b/c people think she’s not a “real bisexual”
i guess that’s why lohan matters too
Laneia: and sometimes it’s just nice to look at something brainless, and there’s nothing wrong with that
Riese: when i feel brainless
i just want to play must pop words
i get confused at celebrity gossip ’cause i don’t know who any of those people are
and i feel like it’s made up
Laneia: by them
Riese: and if i want to read something made up
i would read a novel
Laneia: yes
Riese: but it does matter right? like for it to be true that lohan is bisexual and not just “oh samantha was a blip”
and that it’s not a publicity thing
for lady gaga
to say she’s bisexual
that it’s like REAL THE WAY THAT WE LIVE, sometimes bisexuals like boys sometimes they like girls etc
Laneia: it matters in the same way it matters that we’re right about everything. like, we know we are, but sometimes it’s just not worth talking about b/c no one outside of us believes us anyway
like that their mother really is gay
and they are too
Riese: exactly. i like being right. also sometimes it’s hard for me to come up with something smart to say every day
i’m worried that my brain might explode
Laneia: also you wrote a bunch of stuff yesterday
Riese: that’s true. it’s a good thing i don’t work at the awl
Laneia: well if you worked at the awl, you’d probably be having more stimulating conversations with more people on a regular basis
and no one would ever talk about lady gaga
and what the fuck fun would that be
Riese: maybe someone from the awl will interview tammy lynn for us
Laneia: i think maybe we should wait until she calls us
b/c if melissa called AE
that’s the next logical step
for tammy
to call us
Riese: yeah let’s just wait for her to call us

Is doing no wrong right here, in her interview with Katie Couric: 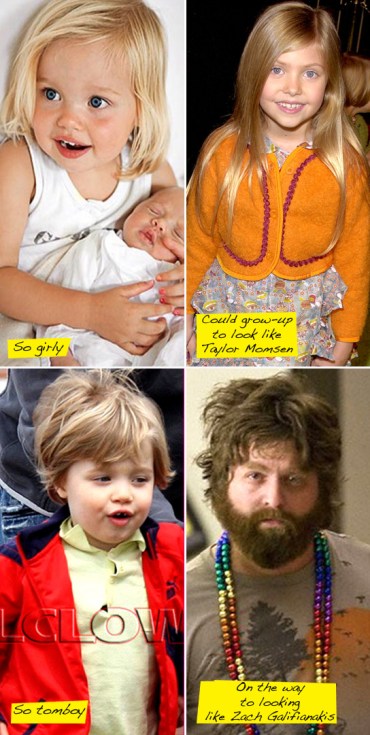 Well, we think Shiloh looks like the next kickass style superstar, as we explained in “Shiloh Jolie-Pitt’s Tomboy Look Scares Media Just Like Ours Scared Our Grandparents.”

Perhaps Shiloh is the next Nat Garcia. You never know. 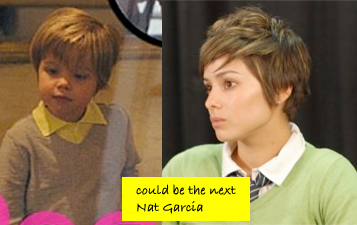 There were rumors swilling on Monday that Lohan had a new girlfriend, photographer Indrani. Lindsay shot down the allegations. Now we’ve got a behind-the-scenes video of Lindsay’s shoot with Markus Klinko & Indrani for the new Bravo TV show, Double Exposure. Abe Gurko of I Mean…. What?!! (which sounds like the title of an AfterEllen vlog or something) was invited on set of Lindsay Lohan’s photoshoot, and from this particular experience chose to label his photo, “Are these two the new hot item? A very hot combo indeed. What will Sam Ronson say?”

Further fanning the flames of the potential publicity-stunt fire, Gurko writes, “each episode is a different celebrity photo shoot and all the Bravo-type drama that ensues. Lindsay was the consummate professional on this set and gave it her all.”

Does anyone else find it odd how Indrani is talking shit about Lindsay’s previous photoshoots and saying how everyone just exploits Lindsay and doesn’t see her for who she truly is? Emotionally manipulative relationship in the works, y’all.

Fans of Grey’s Anatomy and Callie/Arizona were surprised and delighted last night when, amid some sort of plot involving a crazed gunman shooting people, Calizona had some lesbionic moments. From EW Popwatch:

Still oblivious to what was going on in the rest of the hospital, Arizona and Callie continued to have it out. ”I’m going to go the more traditional route of totally hating your guts,” Callie told Arizona when the latter suggested they be friendly. Eventually the sniping unearthed a deeper-seated problem — that Arizona didn’t trust Callie to stay true to her, what with all the men and women she’d fallen for over the past few years. Callie’s response: ”When are you going to forgive me for not being a good enough lesbian for you?”

We even got a wonderful, rare, passionate lesbian kiss to tie things up when Callie told Arizona, ”I don’t want to have kids if it means I can’t be with you.” And Arizona said, ”No, we’ll have kids. We’ll have all kinds of kids.”

You can go watch the whole thing at Popwatch.

I love when ONTD does Ask Ro posts. It inspires me to answer questions on my formspring. 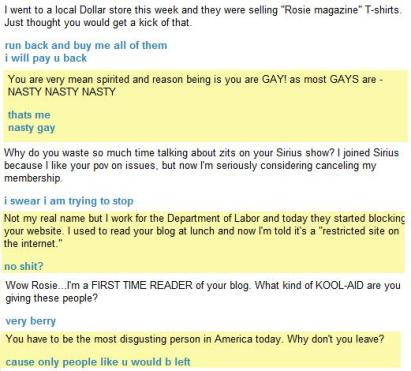 Chely Wright goes on Oprah and Heather Hogan recaps it for you, tears up a little bit: Chely Wright on “Oprah”: “I won’t allow the word ‘lesbian’ to be used as an insult toward me anymore” (@afterellen)

Kelly Osbourne announced to her 280,000 Twitter followers that she and “Mum,” Sharon, are gearing up for this year’s LA PRIDE Parade. CSW President Rodney Scott says, “The Osbourne’s meaningful support of the LGBT community goes beyond simply making appearances. Sharon & Kelly speak out for social issues that educate and encourage increased participation which carry out our mission of Pride 365, Power, Passion, Purpose.”