Previously on Legends of Tomorrow, which I know was approximately 87 years ago, we learned Charlie was not only a shapeshifter but also one of the Fates and she embarked on a mission to beat her sisters to the race for the pieces of the Loom. Also, Mick had a kid, Zari altered her own timeline to gift us with the CatChat Celebrity version of herself, and Avalance remained adorable as ever.

We open this week in 1977, three nights after Charlie borrowed Amaya’s face and joined the Legends, her old punk band The Smell was meant to perform in London. But before the concert can really pop off, a mysterious figure murders the bouncer, and I won’t lie to you, I saw some red pleather and what I mistook for a stake and my first thought was VAMPIRE SLAYER but then when the petite blonde did not start slaying but instead turned into a pure light that burned a man from the inside, I knew we weren’t dealing with The Chosen One. 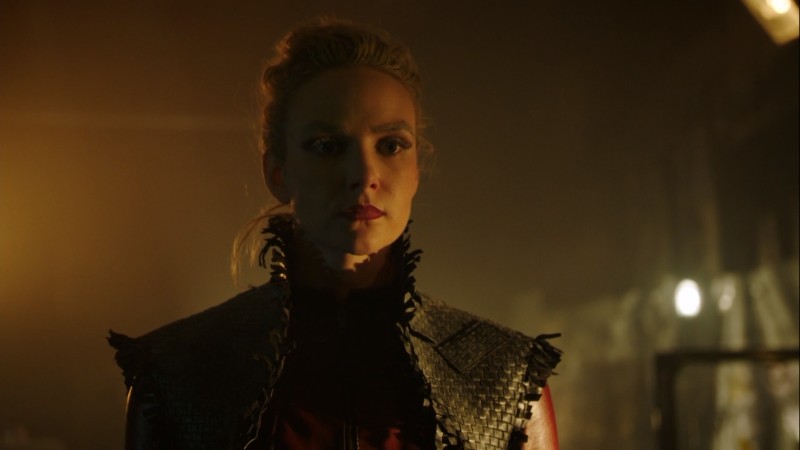 Just some other blonde in leather with… wait are those knives made of BONES?

Up on the Waverider, Zari wakes up in a nightmare of her own, with a Beebo staring at her and a Nate in her bed. Gideon informs her that she sleepwalked there in the night, but Zari cannot fathom why. Nate tries to reassure her that nothing happened but Zari hates literally all of this so she storms out. 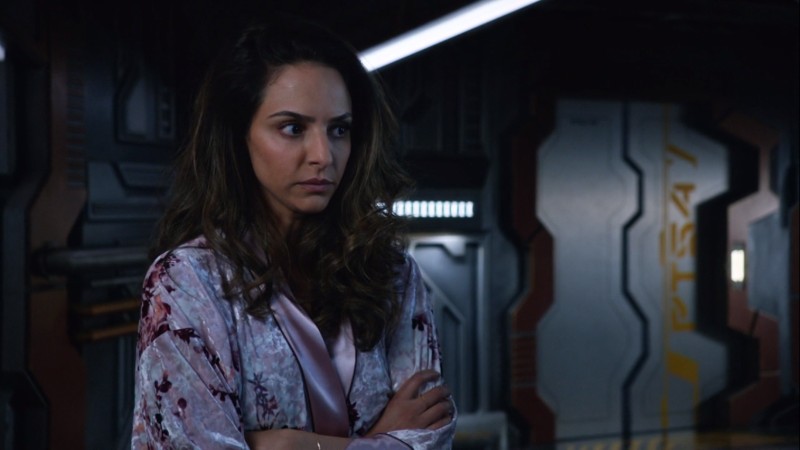 “I was really hoping you were wrong and I was dating Charlie in the last timeline.”

She runs into Charlie who is loving Zari’s walk of shame look but also does not hesitate to flirt with her. One by one Zari runs into Legend after Legend, none of whom are particularly scandalized; except Zari of course, who is extremely flustered by this whole ordeal.

Charlie is ready to go out with Constantine to find another piece of the Loom, when she learns about the massacre at her old bandmates’ concert. Ava and Sara find her and try to comfort her, but she knows it’s her sister who did this, what with the man burning up from the inside, so she blames herself. 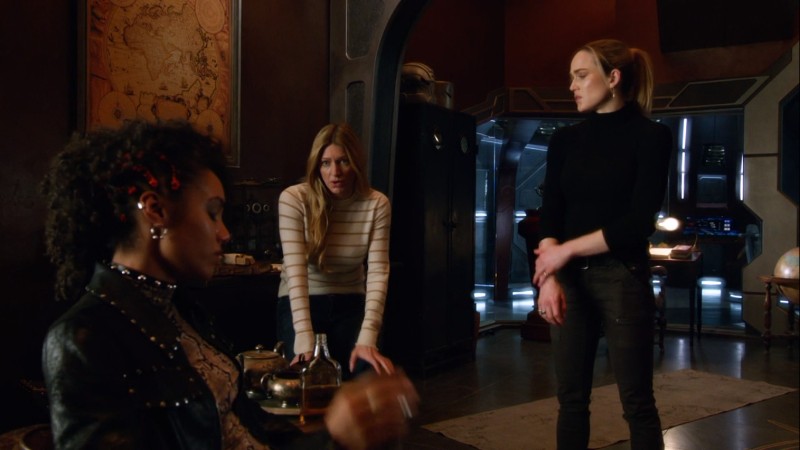 This episode was bookended with Avalance comforting a friend together and it’s just so pure and good and I wish they would co-comfort me.

Constantine sees this as a reason to speed up their search, but Charlie isn’t in the mood. She storms off and also, she blows Sara off saying she couldn’t understand, and to Sara’s credit she agrees, but also, of everyone on that timeship, Sara is the one who would be most likely to understand what Charlie is going through. She’s suffered more loss than any one person should, and also an ex-evil version of her sister is running around on Earth Prime right this very minute. But anyway, Sara sympathizes with Charlie and tells Constantine to put the hunt for the Loom on hold. 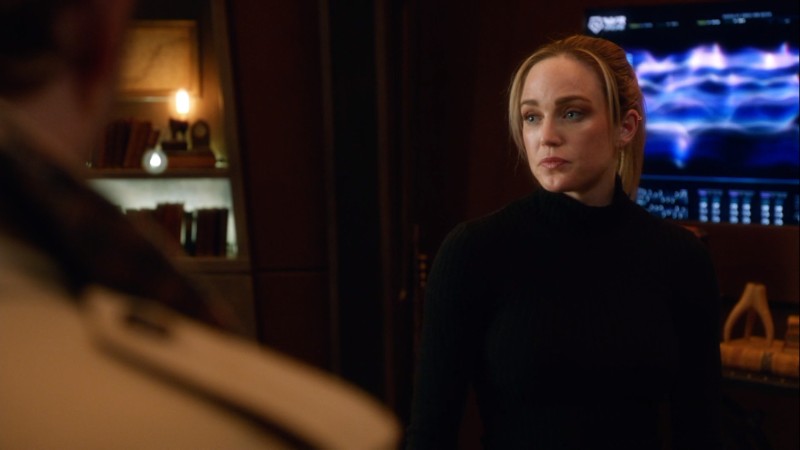 Get you a girl who can pull off a tank top and a turtleneck with equal ease.

But as soon as Sara and Ava leave the room, Constantine does some magic and transfers the ring’s locator energy into a talisman which points him in the direction of British Columbia.

At this point, the woman we now know is Atropos beebops down to hell and goes to chat with the Clockmaker about how her sister Clothos is disguised as a human named Charlie. The Clockmaker is delighted to learn this, because she knows a shapeshifter named Charlie who hangs out with one John Constantine, whomst she can track. And she’ll do this for Atropos because she’s her sister. THAT’S RIGHT, THE CLOCKMAKER IS LACHESIS and frankly I feel foolish for not realizing this before. As soon as Charlie came out as a Fate I should have put together that the person literally fiddling with how long people live was the allotter.

Anyway, Lachesis tells Atropos where to find Constantine, who is of course going against Sara’s orders and went to find the piece of the loom himself.

When the girls realize where Constantine is, they set off to find them, but on their way out, Mick storms in all out of sorts, so Ava offers to stay behind and deal with that so he doesn’t set the Waverider on fire while they’re gone. Sara gives her a lil kiss and off they pop. 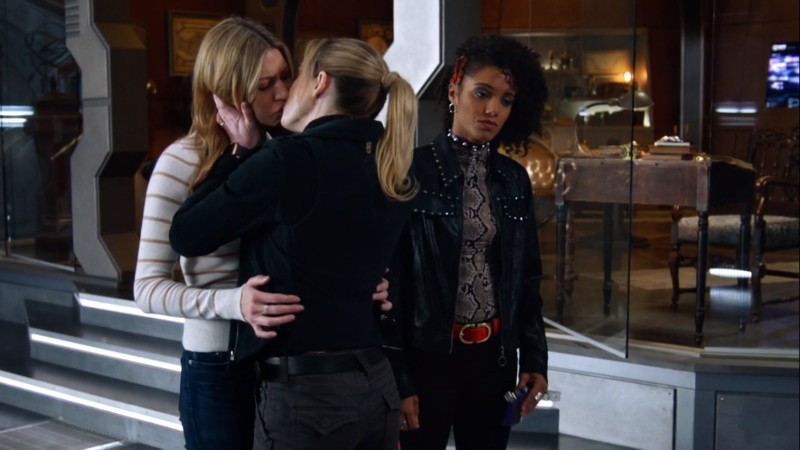 I am always the Charlie of this situation.

Sara and Charlie track Constantine to a forest in Canada, where they find a notice that Supernatural is shooting there. Sara is PUMPED but my brain is broken because half the CW shows are in the same universe, but this implies that in that universe, some other CW shows are still CW shows… Anyway, Sara loves Supernatural so much that Dean is her “hall pass” so she’s all smiles. She tries to get a glimpse into what it was like when Charlie was a fate and she explains the Fates and their roles while they traipse through the woods after their rogue warlock 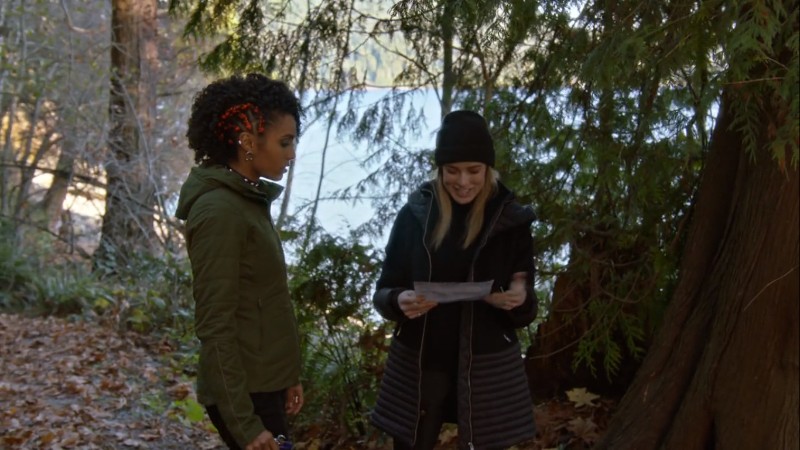 Me every time I see SVU is filming hoping maybe this time will be the time I finally see Mariska with my eyes.

Up on the Waverider, Zari is a little worried she’s losing her mind because she swears she just saw the prettiest little kitty wandering around the ship. Behrad tries to calm her down by playing a round of Mortal Kombat with him, but it triggers more memories for her and she says she thinks she’s being haunted by someone who dresses like a teenage boy and loves donuts. 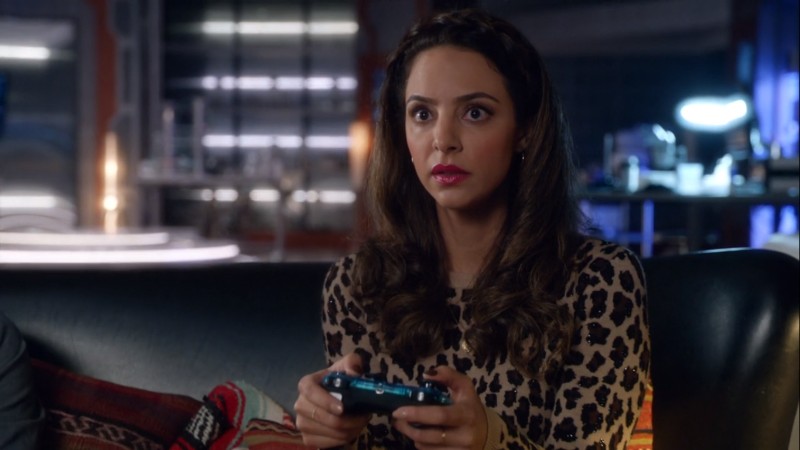 Live footage of me when I actually win a game of Fortnite.

She grabs her brother’s arm in frustration and touches the air totem and wind powers flow out of her hands. Behrad finally realizes his sister isn’t just having a hard time adjusting to life as a time traveler; something is really going on here.

In the Vancouver woods, Sara and Charlie find Constantine amongst some Supernatural props and Sara lays into him so hard she doesn’t notice Charlie being haunted by the voices of her sisters. What DOES get her attention, though, is the jumpship exploding. Charlie looks more scared than we’ve seen her in a while and she says her sister has arrived. 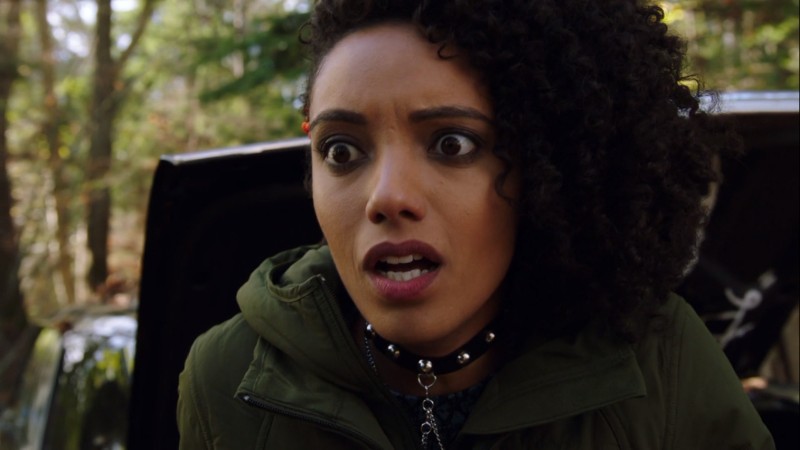 Up on the Waverider, Behrad and Nate try to work out what Original Flavor Zari was like. They imagine the three of them were best friends, and that she and Behrad were like Wonder Twins sharing the air totem. The boys are amped about this imagined reality but Zari looks overwhelmed by the idea of a superhacker Legend-ary version of herself.

Meanwhile, Ava schemes with Mick about how to get his daughter to like him. They decide to have Mick pop into Lita’s life at various important events and make a scrapbook for him to give his present-day daughter. For the first ten years, she pretends to be his probation officer taking him out on a furlough excursion to explain how he’s visiting while in jail. Ava is pretty proud of her genius idea.

In the Supernatural forest, Charlie finds herself face to face with her sister. Charlie stands firm to the belief that people deserve to be free, to choose their own destiny, and lists great things humans achieved without their interference, but Atropos gestures widely to the world and points specifically to people protesting a shut-down during a pandemic, “Look how well these idiots did when you let them fend for yourself.” While she’s being scolded by her big sister, Charlie spontaneously shifts into the image of a little girl, which is literally me every time I visit my parents and get into a fight with my mother, and Charlie comes very close to giving in and going with Atropos. But Sara barrels onto the scene and literally challenges this god to fisticuffs because of course she does. 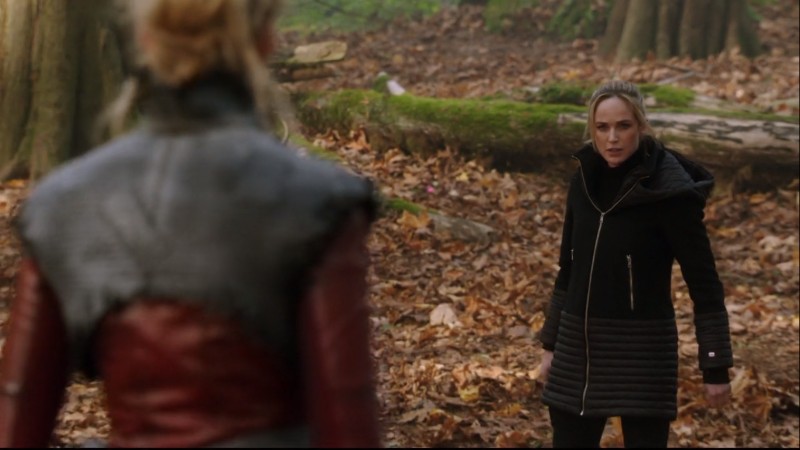 She said “pick on someone your own size” but I feel like Sara is very smol! So it should be literally anyone else!!

Constantine tries to help and holds her off while Sara and Charlie get away. Charlie is worried Constantine is dead but Sara knows we’re not that lucky. 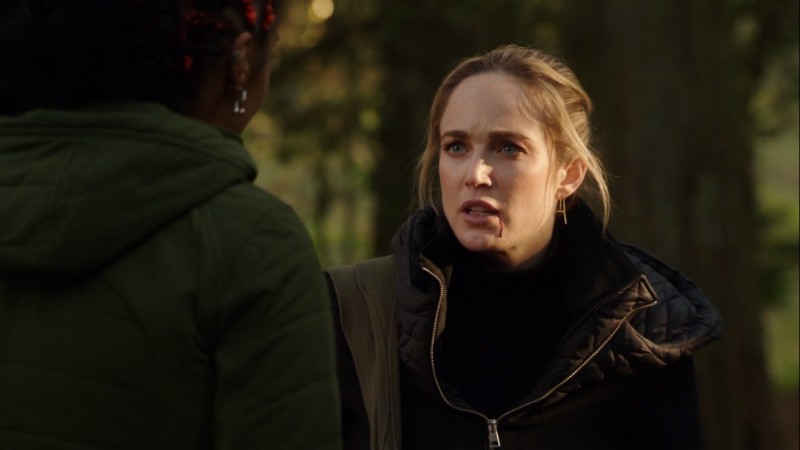 “If we could ditch Rip Lite that easily he would have been gone before that one weird double-Constantine episode for SURE.”

After a few seconds of running, Constantine joins them, seeming to have bounced back awfully quickly, even for Constantine. We learn something the girls don’t know: this is Atropos; the real Constantine is unconscious.

Valerie has written 401 articles for us.