feature image via Karim Sadli for The New York Times.

In this month’s edition of T: The New York Times Style Magazine, center of my actual beating heart Kristen Stewart talks about her struggles with anxiety, her love for her girlfriend, her appreciation for the craft of acting and most importantly, the fact that she has been hiding a private Instagram account from me THIS ENTIRE TIME. Kristen, I thought we were friends.

Writer Nicholas Haramis notes several times how open and comfortable Stewart appears, how markedly at ease and different she seems from her pouty, perpetually miserable public persona. Her Los Feliz home sounds pretty much exactly how one would imagine – stocked with mementos from her films, fashion and photography books, a Playboy pinball machine, some metal letters spelling out the word ASS, Kerouac, Dostoevsky and Kafka novels, and oh – a garage full of paintings inspired by her poetry, which will later be turned into artistic short films. Of one painting, she explains, “It’s basically about that moment when you wake up and you get dressed and you realize, ‘I’m not sad anymore. I’m not saturated anymore. I’ve been dropped back into everyone else’s reality and now I can live again.'” She sheepishly tells Haramis, “Yeah, I mean, I’m not, like, good. It just feels nice to apply paint to something.”

My personal favorite part of the article is where Kristen mysteriously leads Haramis into her garage, described here as “the most intimate room of the house.” I imagine it went something like this: 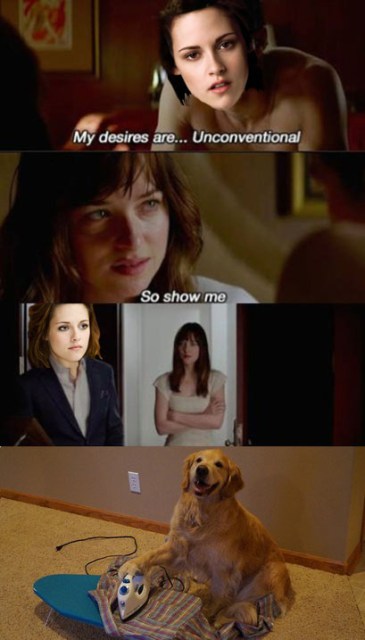 Stewart has seemed much more at-ease in recent interviews, reportedly due to her happiness with her adorable partner Alicia Cargile. In this interview, she giddily shows Haramis pictures of the pair in her private Instagram account and gushes about how cute Cargile is. Kristen Stewart could have been headlining No Filter THIS WHOLE TIME and I feel very personally betrayed, but whatever Kristen.

As for Twilight truthers insisting that Stewart must just be biding time before she can reunite with former costar and distant ex Robert Pattinson, Stewart explains, “People wanted me and Rob to be together so badly that our relationship was made into a product. It wasn’t real life anymore. And that was gross to me. It’s not that I want to hide who I am or hide anything I’m doing in my life. It’s that I don’t want to become a part of a story for entertainment value.”

Our Lady of Perpetual Resting Bitch Face seems increasingly driven to seek out challenging roles and expand her repertoire as an actress, describing acting at different times as “an explorative, meditative, moving, beautiful, transcendent experience that brings us all closer,” “tapping into a magic world,” “finding a portal” and my personal favorite, “harnessing a fluid.” She admits to having struggled with the balance between exposing herself as an actress in her roles and exposing herself as a heavily scrutinized public figure. “How do you feel like you’re not being stolen from, yet at the same time not guard yourself to the point of depriving yourself of so much goodness in life?” she asks. Stewart describes having found a certain level of resiliency and indestructible energy within herself, and seems much less ruled by the anxiety and insecurity which made much of her earlier experience with fame so uncomfortable.

“I’m not the typical showman,” she tells Haramis, “but at the same time, I want so badly to expose myself. I want to be understood and I want to be seen, and I want to do that in the rawest, purest, most naked way I can.”

If Kristen Stewart ever puts out a book of poetry a la A Night Without Armor, I will preorder it the second it becomes available. In the meantime, she is currently starring in Cafe Society, a film by a terrible person that I am not going to see.