Sullen wolf goddess and noted poet laureate Kristen Stewart graces the glamorous cover of Nylon Magazine this month. In an uncharacteristically candid interview, Stewart addresses how uncomfortable she is being the subject of tabloid speculation, while giving this tabloid plenty to speculate about. The star explains that she toes the line between not caring at all about what people think and keeping her private life private; while she refuses to discuss the status of her relationship with ex-boyfriend Robert “Sparklevamp” Pattinson, she opens up more than she ever has about her very close friendship with Alicia Cargile.

For months, tabloids have been speculating about the pair, who hold hands in public, vacation together, and purportedly live together. Rags like the UK’s Daily Mail regularly refer to Cargile as Stewart’s “gal pal,” and make guarded remarks about how nice it is that the two are such good friends. Kristen Stewart’s been raked over the coals by tabloids for her relationship drama in the past, and she’s never been the kind of celebrity to revel in that sort of attention. She’s always seemed to find such publicity agonizing, and has displayed an (awesome) give-no-fucks attitude towards the paparazzi. She owes us nothing. 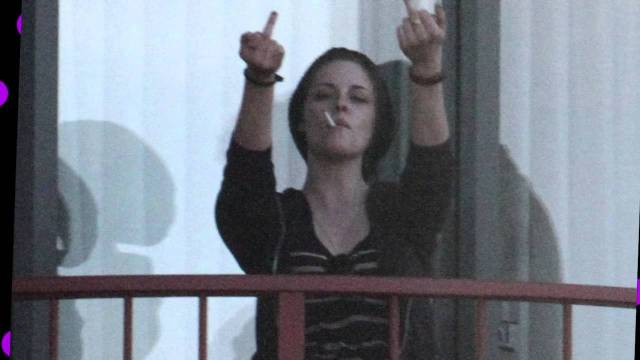 While tooling around Echo Park in her own car full of clothes and junk with a journalist (so down-to-earth!), Stewart laments the “weekly comic book” aspect of tabloid journalism and wishes she wouldn’t be so recognizable in public. However, when asked about her sexuality, Kristen responds: “Google me, I’m not hiding.”

This is the “I think it’s pretty obvious who I’m seeing” of the Stewart-Cargile era. Praise the heavens.

Pressed further, Stewart explains, “If you feel like you really want to define yourself, and you have the ability to articulate those parameters and that in itself defines you, then do it. But I am an actress, man. I live in the fucking ambiguity of this life and I love it. I don’t feel like it would be true for me to be like, ‘I’m coming out!’ No, I do a job. Until I decide that I’m starting a foundation or that I have some perspective or opinion that other people should be receiving…I don’t. I’m just a kid making movies… I think in three or four years, there are going to be a whole lot more people who don’t think it’s necessary to figure out if you’re gay or straight. It’s like, just do your thing.”

Kristen Stewart respectably does not care even one bit what this column thinks about her relationship, nor does she feel the need to define it for us – and that’s awesome. It’s exciting to see an actress with her level of visibility acknowledge that sexuality can be fluid, and that it isn’t a big deal. It’s commonplace nowadays for celebrities to offer every single aspect of their lives for public consumption, and Stewart refuses to do that. I am a monster for writing this article right now. Kristen, I’m sorry I’m like this.

The September issue of Nylon is out Aug 25, and includes other fun tidbits like this bit about Joan Jett teaching Kristen guitar on the set of The Runaways: “If I wasn’t fully feeling it, she’d walk to the end of whatever set or stage I was on and be like, ‘Kristen, pussy to the wood!'” I never thought about what it would be like to get guitar lessons from Joan Jett, but now I can’t stop thinking about it.