In September, fans accused Kit Connor of “queerbaiting” after a video surfaced of the 18-year-old actor holding hands in Paris with actress Maia Reficco, his co-star in the upcoming film A Cuban Girl’s Guide to Tea and Tomorrow. It’s a nonsensical accusation, of course: it betrays the actual definition of “queerbaiting,” a term intended to critique fictional narratives, and it assumes that Kit could not possibly be both queer and in a relationship with a girl. But Twitter is a dedicated incubator of nonsensical accusations, and eventually the harassment grew so extreme that Kit left Twitter altogether.

Then on Monday, he came back, briefly, to share only this: “back for a minute. i’m bi. congrats for forcing an 18 year old to out himself. i think some of you missed the point of the show. bye”

back for a minute. i’m bi. congrats for forcing an 18 year old to out himself. i think some of you missed the point of the show. bye

The show in question is Heartstopper, in which Kit Connor played Nick Nelson, a sweet rugby player who realizes he’s bisexual after falling for Charlie, the nerdy and recently outed gay boy he’s seated next to in form class. It’s one of my favorite shows of the year, and the genuinely heartwarming adaptation of Alice Osemon’s beloved graphic novels turned Kit Connor into a bit of a star. This thing happens when an actor plays a queer role wherein everybody wants to know if that actor is queer themselves, and he was asked directly about this on a podcast and declared that, “for me, I feel like I’m perfectly confident and comfortable with my sexuality. I’m not too big on labels and things like that. I’m not massive about that, and I don’t feel like I need to label myself, especially publicly.” This did not abate the public’s desire for Kit to label himself, publicly. The queerbaiting accusations raged on.

Again it is worth remembering that Kit Connor is simply 18 years old.

What “Queerbaiting” Actually Is 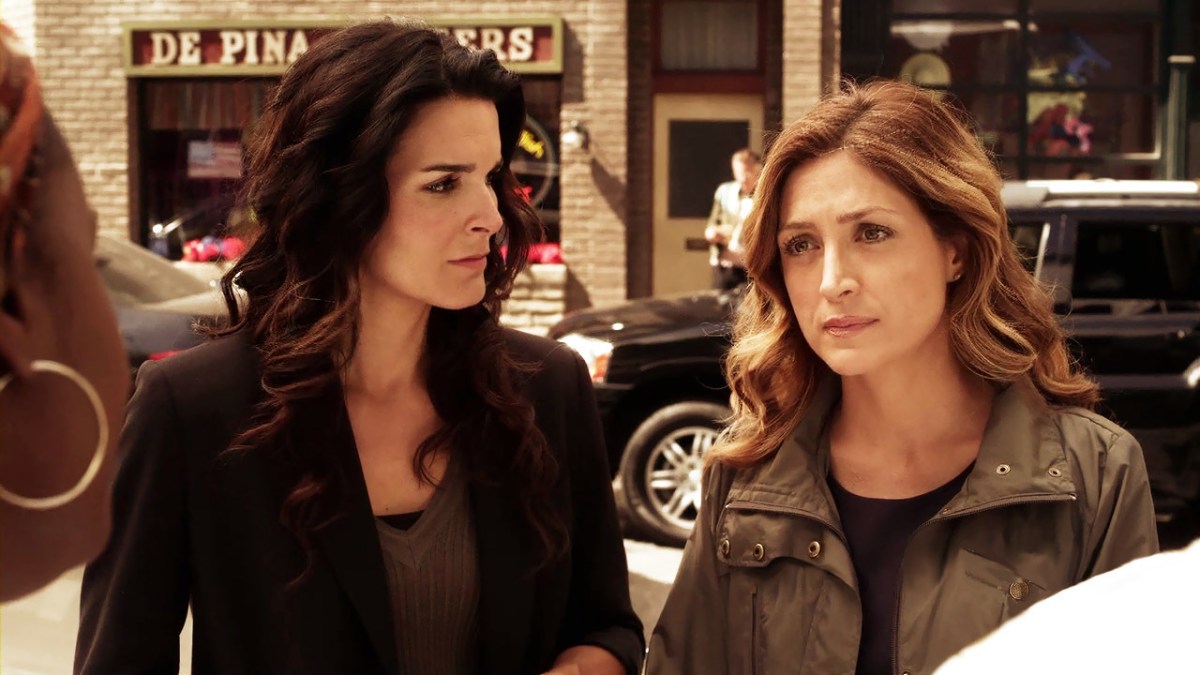 It’s this, this is what it is

What is queerbaiting, exactly? When we first covered it in 2013, Rose wrote that it was a term that had likely originated on forums like Livejournal and Tumblr and defined it loosely as “when [tv shows and movies] give us just enough to keep us interested, but not enough to satisfy us and make us truly represented.” They quoted a writer from Isis Magazine who defined it like this: “the practice of television shows and movies putting in a little gay subtext, stirring up interest with queer fans, and then pulling a NO HOMO, MAN on the viewers.”

Some of the more legendary examples of lesbian queerbaiting include Once Upon a Time and Rizzoli and Isles. Like many critiques of how gay narratives are handled in mainstream media, such as Bury Your Gays, queerbaiting is informed by a legacy of neglect and mistreatment of queer narratives in film and television.

But even in 2013, debating the definition and application of queerbaiting in fictional works was already complicated. How do we apply it to older media, when gay and lesbian subtext was all a creator could get away with without losing their right to tell stories at all? Xena the Warrior Princess may feel like queerbaiting to a modern audience, but it felt like a revolutionary step forward towards visibility for lesbian audiences at the time. Even today, there are specific markets where minor queer acknowledgements or subtext remain relatively revolutionary and worth celebrating.

Ultimately, the definition of “queerbaiting” as it applies to fictional works does generally involve some degree of malicious intent. It involves a deliberate withholding from storytellers — whether that withholding is informed by their own (conscious or unconscious) homophobia, network or production pressures, concerns about losing a straight audience or a personal disinterest in actually telling queer stories.

How does this apply to an actual human boy? Well, it simply doesn’t. As Drew Gregory recently tweeted, “accusing individual people of queerbaiting is like getting mad at your friends for not passing the Bechdel test or going to a funeral and blaming it on Bury Your Gays.”

When Did Queerbaiting Become About Real People?

In 2018, after Rita Ora’s song “Girls” inspired a bevy of backlash that forced Ora to come out as bisexual on the public’s timeline rather than her own, Out Magazine offered a different definition of queerbaiting: “making specific overtures to queer communities as if to be of the same experience [and/or] giving vague answers or in some way being ambiguous about their desires as to not turn off fans who hoped to find a thread of commonality.” They cite celebrities like Katy Perry and Nick Jonas as some who’ve “used queerness and queer audiences as a way to galvanize support and launch into mainstream.”

While that phenomenon is real and worth unpacking, it’s not “queerbaiting.”

But “queerbaiting” is a heavy term that introduces a specific historical gravity to a conversation, so I get why it’s tempting to use it instead of simply attempting to explain why a situation is upsetting using a series of words strung into sentences and paragraphs.

In a them dot us piece in October, James Factora noted that queerbaiting was increasing in popularity as a term to describe real people” who look or act queer without explicitly saying or coming out as queer.” Examples of those impacted by this illogical shift in definition included Harry Styles but also Cardi B, who Factora notes is very out as bisexual but apparently not out enough  to stave off accusations of queerbaiting following her appearance in a sexy Normani music video.

The lines between “person” and “brand” are increasingly blurry, and perhaps often fans do feel like they are indeed critiquing a deliberate fictional narrative when they’re challenging a celebrity’s social media presence, artistic output, or simple existence. And in a few small cases, they’re right — sometimes a grown adult is so famous and successful and powerful that it’s not necessarily wrong to conceive of their narrative as a that of a brand (e.g, Taylor Swift) and to analyze their output from that vantage point.

But, in most cases, as Factora concluded, “queerbaiting accusations strip public figures of their humanity and complexity and turns them into characters for our consumption.”

Maybe a decade ago, I was talking to then-editor Laneia about Kristen Stewart, one of those celebrities the lesbian community had fixated upon as potentially one of our own. I wondered aloud why she wasn’t out, and Laneia said “I don’t think she knows she’s gay yet.” That possibility had never occurred to me — Kristen Stewart was famous, and everybody thought she was gay, so certainly she would’ve done whatever soul-searching was required to validate those claims, right? But she was 21 years old. When I was 21 years old — despite growing up in a liberal gay-friendly town, despite having a lesbian Mom, despite having hooked up with multiple girls — I still thought I was straight.

As the discourse around queer actors playing queer parts heats up (for the record I am in the “an actor doesn’t need to be gay to play a gay role” camp), there is increasing pressure on actors with queer parts to come out. It’s fantastic when they do — and so many are! our internal database has 658 out queer women and/or trans actors in it right now! — but they shouldn’t feel they must do so to stave off accusations of dishonesty or betrayal. This is particularly true when the actor is a kid or a teenager.

Furthermore, making art or participating in its creation is often a crucial part of one’s journey of self-exploration. Those who are part of creating art that engenders a wide audience on Netflix could be having the same internal journey as those who discover their sexuality by playing Joanne in a high school production of Rent. When we pressure young actors in queer roles to come out or to state any sexual orientation at all, we’re denying them that journey. It’s also that same pressure that might make a young person hesitant to come out until they’re sure of what they are.

The thing is you never know. For years, Daniel Sea was widely cited as an example of a cis actor playing a trans role on The L Word, simply because at the time he hadn’t yet figured out his gender or how to articulate it. “When I opened that first article in Wired Magazine and it said that the problem with TV is cis people playing trans roles and Daniela Sea is a perfect example of this, it really hurt,” he remembered in an interview with Drew Gregory last year. The author of Love Simon came out as bisexual in 2020 in an essay where she recounted being labeled as “a straight woman writing shitty queer books for the straights, profiting off of communities I had no connection to.”

The problem with accusing a person of queerbaiting is that it is indeed an accusation of negative behavior. It’s not the same as speculating about whether a certain adult female celebrity is dating a girl or non-binary person because they appeared together in a context that would inspire speculation had it been an opposite-sex pairing.

It’s an accusation of betrayal and duplicitousness. It’s also most often levied against bisexual people, who usually are already contending with those stereotypes being used against them.

The market usually continues to value straight cis voices over gay and/or trans voices, continues to privilege and uplift their versions of our stories over our own. But those forces aren’t the fault of the individual teenager, and it’s not on them personally to compensate for decades of puritanical, profit-driven corporations shortchanging queer audiences.

Kit Connor is just a teenage boy who’s in a really cute Netflix show about young love and milkshakes and holding hands in the snow. As Heartstopper itself so clearly declares: “there’s this idea that if you’re not straight, you HAVE to tell all your family and friends immediately, like you owe it to them. But you don’t. You don’t have to do anything until you’re ready.”