We’re at an interesting moment in history for LGBTQ media representation. We’re long past the days when queer characters and romances were limited to gay-oriented shows buried in the premium channel listings; now, there are plenty of mainstream shows, even those aimed at teenagers, that represent people like us and our love and sex lives. And as our political equality goes further and further, and it’s clearer and clearer that the majority of Americans support marriage equality and other LGBTQ political issues, we’re likely to see even more of us on our screens, big and small, as writers cue into the notion that their audiences are not necessarily threatened by characters of different sexual orientations or gender identities.

Which, of course, means that fans demand more accountability from writers that get us wrong – or just don’t give us enough. Hence, the debate that’s been flaring across the queer and pro-queer Internet about the notion of “queerbaiting” – when they give us just enough to keep us interested, but not enough to satisfy us and make us truly represented. But what does that mean exactly? What is “queerbaiting”?

It’s hard to find anything about where exactly the term “queerbaiting” in this context originated, but it seems to have entered the popular lexicon on fan-heavy sites like Tumblr and Livejournal as a result of several controversies involving “queerbaiting” with male TV characters – namely, in Tumblr favorites like Supernatural and Teen Wolf. In the case of the former, actor Misha Collins used the term at a convention, stating: “First of all, I think the term ‘queerbaiting’ is not accurate. It pissed me off, because I feel like a real champion of that community with all those letters [LGBTQ] – you know, I’ve officiated gay weddings. Also, I don’t understand what the term means.”

Sherlock (Benedict Cumberbatch) and John Watson (Martin Freeman) from the BBC series, via The Mary Sue

Tumblr, predictably, erupted over these comments (even though, in context, they come off quite differently). But Collins is right that the Internet can’t seem to agree on a definition for the word. Some interpret “queerbaiting” as just about any subtext; others say that it has to include some sort of “no homo” joke, a clear acknowledgement that, despite the obvious chemistry, it’s never going to happen and the characters are straight. In Emerson College’s online Isis Magazine, Rebekah Bailey gives an example of the latter in action in BBC’s Sherlock:

Queer-baiting, for those who do not know, is the practice of television shows and movies putting in a little gay subtext, stirring up interest with queer fans, and then pulling a NO HOMO, MAN on the viewers. If you’ve watched Sherlock, this is a major “subplot” of the first episode, and it continues as a running joke throughout the series. John and Sherlock are mistaken as a gay couple, one of them (usually John) goes, “no way, of course not, we’re not even gay,” and it’s played off as a joke. The mere speculation that a character could be gay is played for laughs, and if you don’t see something wrong there, then there’s something wrong.

Indeed, the idea behind “no homo” is both that homosexuality is little more than a gag, and also that it’s deviant and wrong some way – “of course we’re not gay, how could you even think that” is the underlying assumption behind the joke.

As for examples with women, “queerbaiting” for lesbians tends to run in different directions – mostly, in terms of actually giving the characters some physical girl-on-girl action, but making sure it never turns into anything long-term or meaningful or contradicts the characters’ previous heterosexuality. In other words, the Sweeps Week Lesbian Kiss. We’ve seen this in so many places – teased with a lesbian kiss only to have the character go back to being 100% straight next week, or for it to be a dream sequence or some other weird context that makes it meaningless – that it would take forever to list. But there are still shows with women that follow the Sherlock model for queerbaiting; the most prominent these days is probably Rizzoli & Isles. That show’s actors recently admitted that at least some of that unresolved chemistry between the title characters was a deliberate play to their lesbian viewers:

[Angie] Harmon admits they do play up the tension sometimes. A poster for the new season features the women languidly stretched out together on a picnic blanket, for example. ‘Sometimes we’ll do a take for that demo,’ Harmon admits. “I’ll brush by [Maura’s] blouse or maybe linger for a moment. As long as we’re not being accused of being homophobic, which is not in any way true and completely infuriating, I’m OK with it.”

When it’s that deliberate as in the cases of Sherlock or Rizzoli & Isles, there is a distinct feeling that the creators are playing with LGBTQ – and invested-in-LGBTQ-relationships (since the core of the “Johnlock” fanbase is slash-fanfiction-writing straight women) – dollars, but don’t care enough about us that they’d risk actually offending homophobes with explicit queer representation. Actors or writers may insist it’s not homophobic, but there is a distinct feeling that we’re being taken advantage of, that we’re second-class fans who they don’t care if they do a disservice to so as long as we still watch. It’s similar to the feeling a lot of queer women have about Glee – but Glee does at least have several canonical queer characters, and the writers listened when fans wanted Brittany and Santana’s relationship to become more than subtext. (And hopefully that’s the last time I’ll be forced to defend Glee‘s treatment of its queer female characters.)

Yet, expanding the “queerbaiting” debate to include subtext in general makes it a bit troubling. First of all, there’s the question of just how “overt” is overt. Maybe those two same-gender characters’ eyes lingered on each other for a little longer than was necessary, but was that necessarily intended by the show creators, or is it just being interpreted that way by shippers in the fanbase? Fan interpretations are, of course, perfectly legitimate, but intention should be considered if one is going to accuse the show creators of homophobia for including subtext. Some fans, for better or for worse, do see subtext wherever they go.

It’s also important to understand subtext in the context of its past. Historically, gay or lesbian subtext has been seen as a positive for the LGBTQ community – a way to get around rigid censors or unfriendly audiences. A way to throw us a bone when we normally wouldn’t have anything, to acknowledge that we’re there in the audience when the powers that be would prefer to ignore us. A lot of older generations of LGBTQ people have fond memories of classic films with wink-wink-nudge-nudge bits of potential queerness designed to fly under the radar of the Hays Code. (For more on this, check out The Celluloid Closet.) And even after it ended, both the new MPAA rating system and worries about audience reactions meant that filmmakers had to still be cautious. TV was no better; if it took until the late 1960s to get the first scripted interracial kiss on mainstream US television, is it any surprise that homosexuality was so hard to find there until the past decade?

As such, those using the broader definition of “queerbaiting” to dismiss any and all overt subtext should at least consider the concept’s progressive history; too often, the conversations in fan spaces about this seem to be ignoring this context when it comes to older works. As one Tumblr user put it: “The original Star Trek series didn’t queerbait. At the time, nobody knew that there was an audience for male/male romance stories, so any romantic tension between Kirk and Spock was accidental. But my God, there was loads of it.” However, the writers of today’s television shows may be too caught up in this history. Because, with the exception of certain genres, like children’s shows, the times where subtext is far as one could go are long past. The point is about expectation; if we are expecting nothing, the occasional nod our way is a pleasant surprise. But when we’re given reason to hope for real representation, having it never go beyond hints – hints that not every viewer is going to pick up on – is mostly just infuriating. 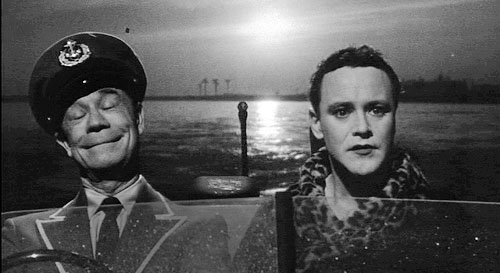 Great Moments in Subtext History: Some Like It Hot (1959) – image via girls-can-play.blogspot.com

And increasingly, the TV landscape is moving toward the latter set of expectations. From Glee to Skins to Pretty Little Liars, same-sex couples are now found all over television. And there’s more than a little proof out there that media representation of LGBTQ characters and their relationships helps move forward public opinion on LGBTQ political equality. So there is a feeling that TV writers who want to keep our representation on the down-low – enough that we see it, and maybe some straight people also looking for it see it, but nobody else does – are wimping out, and are refusing to engage in an important national conversation.

And does LGBTQ representation even need to be about a national conversation? Is it too much to ask that we simply have our romantic and sexual lives treated like anyone else’s, as worthy of epic fictional romances as heterosexuals’ are?

And that comes to the real issue with queerbaiting. Indeed, it may not be homophobia per se – which, besides being a (necessarily) loaded term, implies fear or malice toward homosexuality. What it is is heterosexism, the unchecked assumption that heterosexuality is the norm and anything else is the Other. It’s this attitude that, for example, causes romance advice columns like the ones I’d read in magazines as a frustrated teenager to assume everyone is interested in the opposite sex – not out of hate for gay people, but out of a refusal to check their own privilege or acknowledge the experiences of those who are different from them. Likewise, the problem here is the idea that heterosexual romance is for a general audience, but having a same-sex romance is either specifically for a gay audience or for making a soapbox statement about homophobia.

Subtext in general is unlikely to ever be a lost art. After all, even heterosexual subtext is a thing; sometimes writers don’t want any romance to be explicit, but want to focus on other things or leave the fans to draw their own conclusions. Or sometimes the reason for leaving a particular coupling at the subtextual level while others get clear acknowledgement has little to do with the genders involved. But there’s a clear double standard for a lot of these shows: as Baker writes, “Many times, the shows that have the most queerbaiting also have few to no actual queer characters. Sherlock, for example, has one lesbian character (Irene Adler), but she gets “fixed” because she falls for Sherlock.”

When we’re only getting crumbs while heterosexual characters run the full gamut of romantic storylines, viewers should definitely hold writers accountable and ask why this is the case – “no homo” jokes or not.