The dating life of former hairbow enthusiast JoJo Siwa continues to dazzle the lesbian community with its consistent supply of twists, turns, back-flips and viral dances. Mere months after going public regarding her relationship with TikToker Avery Cyrus, it has been confirmed that JoJo Siwa and Avery Cyrus have, indeed, broken up.

Rumors about JoJo and Avery’s potential romantic relationship began in August, shortly after Avery’s breakup with Soph Mosca, which was important because Soph and Avery were apparently famous on TikTok separately but also as a couple. (For more information on who exactly Avery Cyrus and Soph Mosca are, you can refer to this post.)

At that point, Avery and JoJo’s relationship had been confirmed by a number of events including pictures of the twosome kissing at Chuck E. Cheese and a TikTok video in which JoJo and Avery appeared together lip-syncing to a Kardashian-related sound that is basically a joke where two people say they are “purely platonic friends” when it’s obvious that they are not, in fact, purely platonic friends. They were also spotted in Target by an intrepid lesbian who could tell that they were lesbianing together because we know these things as a community.

In the ensuing weeks, the amplification of this relationship continued at a rapid pace: a date night at a restaurant that served pumpkin butter with its rolls instead of regular butter (JoJo didn’t like the pumpkin butter), Halloween Horror Nights at an amusement park with other TikTok lesbians, Avery cutting JoJo’s hair, Avery cutting JoJo’s hair again? and the requisite multi-day Disneyworld date. However, it wasn’t until October 10th that Avery staged an extremely extravagant official courtship-sealing event that involved the twosome getting into a little paddleboat that went under a bridge that had a huge JOJO BE MY GIRLFRIEND? banner hanging from it. JoJo described the event as “the BEST night ever.” Apparently prior to that evening they’d simply been dating and were not official girlfriends. 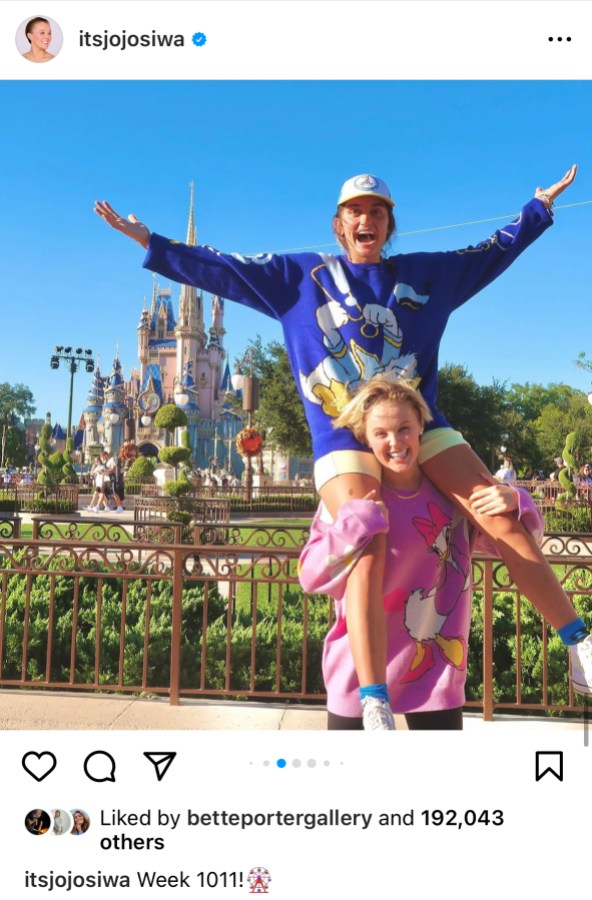 Throughout it all there was a lot of backlash to the relationship — firstly, how quickly Avery was public about her courtship with JoJo after her breakup with Soph (who was still sad about the breakup) and secondarily, that Avery and JoJo’s mutual affection for bright colors, glitter and crafting made them seem “like toddlers.” Others argued that Avery had amped up the rainbows-and-sparkle element of her personal style upon dating JoJo. The adoption of your partner’s style is a common phenomenon in all relationships but especially lesbian ones and can be referenced in the “lesbian urge to merge” section of your handbook. 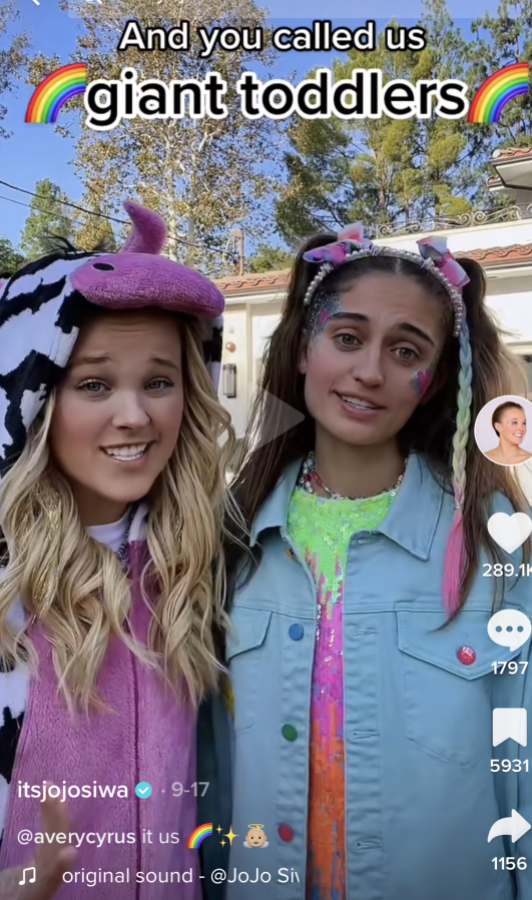 Finally, all of these Gen Z Celesbian forces converged on one magical night in late November at the Hollywood Palladium: a Fletcher concert. JoJo and Avery were spotted in the balcony doing the Macarena to songs that were not “The Macarena” and JoJo’s ex-girlfriend, Kylie, was spotted on the floor with her new girlfriend. Prior to this time, it was unclear if JoJo and Kylie had seen one another since Kylie’s move to Los Angeles a few months earlier. Shockwaves from this event seem to have reverberated throughout Hollywood and its environs, perhaps influencing the tides or the movement of the stars in the skies.

In the ensuing days and weeks, rumors swirled that Avery and JoJo had broken up. Anyhow, then Avery posted a TikTok headed ‘Guess what I Got,” which was followed by Avery doing a little dance while the words “KARMA” appeared over the screen. Many assumed this was evidence that JoJo had left Avery just as Avery had left Soph. The caption read: Karma is my boyfriend and I’m okay with that.

Meanwhile, Celesbian Gossip TikTokker Kales had been discussing the alleged presence of JoJo’s ex, Kylie, in some of JoJo’s recently posted videos. As you may or may not recall, Kylie and JoJo started dating in January of 2021, around the time JoJo came out. Then they broke up in late 2021. Then they got back together in the late winter / early spring of 2022. Then they broke up again at some point. Kylie had been dating someone named Rylin Utah (her date to the Fletcher concert), which is a really great name, but Rylin has been posting about her breakup since the first week of December.

Then, there was some kind of Royal Caribbean Influencer Cruise that both JoJo and Avery were clearly pre-contracted to attend and did, indeed, attend. This is relate-able to me personally. Videos from the cruise surfaced — like messages in a bottle or seashells washing up on the shore of a serene island vista — showing the two stars hanging out but not really in a coupley way. Most crucially, they were clearly not sharing a cabin. Finally, Avery’s cruise wrap-up video included a morsel of relevant gossip: a shot of JoJo handing Avery a package of Silly Putty while saying “This is my I’m sorry for breaking up with you present.” In response to a comment asking why they’d broke up, Avery wrote “We decided that we are better off as friends! We are both so young and still just trying to figure our stuff out!” 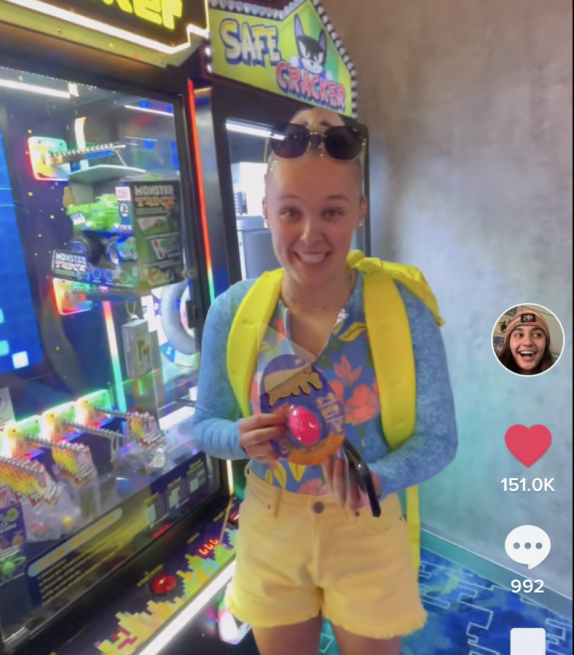 Since that time, both Avery and Soph have posted TikToks indicating that they will be embarking upon a European vacation they booked eight months ago that was non-refundable, but Avery noted specifically that they are not getting back together but also that she wouldn’t be going on this vacation if she was still dating JoJo. 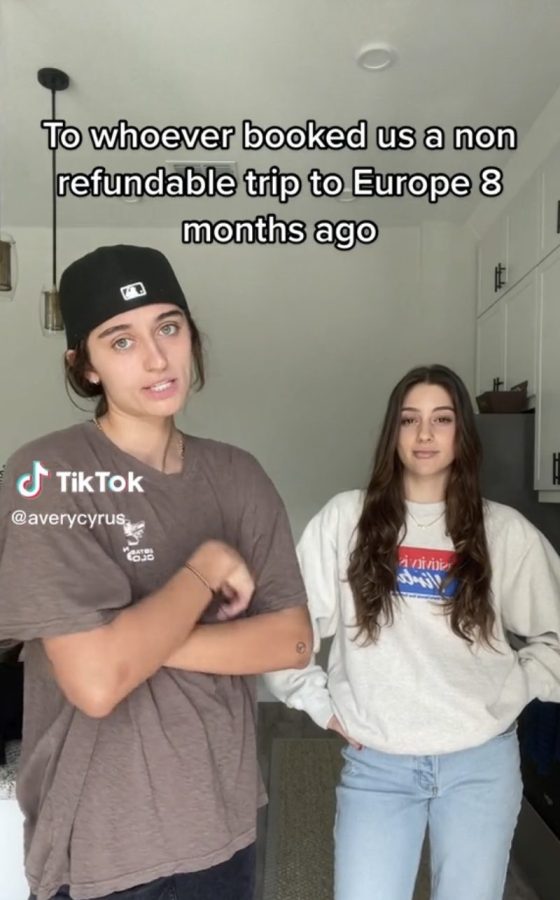 It seemed that like so many lesbian breakups, this one had ended peacefully and amicably on all sides. But then, the whole saga took a twist when JoJo’s Mom’s posted an instagram story implying that Avery “used” Jojo for clout, which is something that many other humans on TikTok had claimed was the case with Avery during her relationship with JoJo, most notably a TikTok user named Dallaswho has really impressive nails.

JoJo’s Mom: Why are you mad?
JoJo: ‘Cause I got used.
JoJo’s Mom: For what?
JoJo: For views.
JoJo’s Mom: Aww.
JoJo: And for clout. And I got tricked into being told that I was loved. And I got fucking played!

This video made headlines all over the world, echoing JoJo’s claim that she was “used for clout.” Avery told E! News:

“From my perspective, me and JoJo left on great terms and are still friends. The relationship was very real and I have nothing but love for JoJo and her family. I’m still very hurt that JoJo broke up with me and am saddened and confused by the situation.”

JoJo did not respond to People Magazine’s request for comment.

Then, Kylie’s ex Rylin posted a video in which she asked the following:

“Correct me if I’m wrong, queen, but didn’t you text Ky the day after the Fletcher concert, and didn’t you hang out with her both the day before and the days after her and I had broke up? and I’m assuming that’s the same timeline you broke up with Avery, so… I’m just saying.”

Then, JoJo’s best friend Ezra posted a video defending JoJo and asking us to imagine what your life would be like if your entire life and every moment within it you never knew if the people in your world really liked you or if they were just using you.

Today, JoJo and Kylie were spotted together at the most magical place on earth.

AND THEN in a totally unprecedented move, JoJo posted a TikTok directly addressing the situation but unfortunately I don’t really understand what it means? It appears to recreate a dialogue between the two, and Kales is also unsure of how to read it. 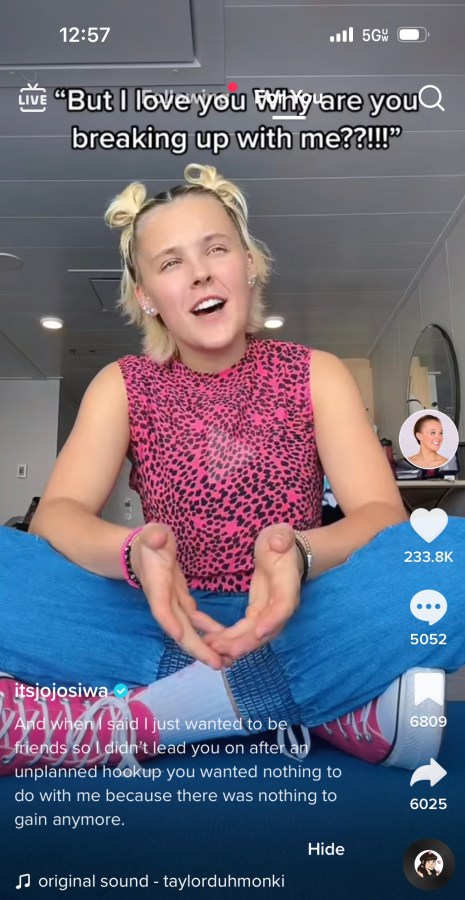 The caption on JoJo’s video reads: “And when I said I just wanted to be friends so I didn’t lead you on after an unplanned hookup you wanted nothing to do with me because there was nothing to gain anymore.” I think this means she and Avery hooked up unexpectedly and then JoJo reiterated that she wanted to be friends and Avery said she wanted nothing to do with her anymore, which’s honestly not a weird thing for a twentysomething with a broken heart to say, but also,

While it is entertaining and mildly culturally significant and also great for our website traffic for me to report on their publicized dating activities, making any reasonable determination about what is true and what is not true about these humans feels impossible without knowing any of them personally.

In conclusion, I truly believe that no lesbian relationship drama has been intentionally presented on a public stage to the degree and on the scale that we are now witnessing with JoJo Siwa’s relationships, and I don’t know what that means or if it matters, but it feels significant in some way. I look forward to reading somebody’s thesis on this topic in the year 2025.