Once upon a time in a land that was not so much a land as it was a state of mind, our beloved candy enthusiast and costumed dancing queen JoJo Siwa reunited with her first girlfriend, Kylie, in a manner that inspired worldwide joy. But mere months or perhaps weeks (what is time) later, it appeared the two had split once again, and in recent weeks/months, under the sweltering Heat Dome of life, JoJo Siwa has found a new gal pal and her name is Avery Cyrus, a situation confirmed this weekend by a number of events including a TikTok video in which JoJo and Avery appeared together lip-syncing to a Kardashian-related sound that is basically a joke where two people say they are “purely platonic friends” when it’s obvious that they are not, in fact, purely platonic friends. From September 10th onwards, JoJo Siwa and Avery Cyrus continued posting videos that made it abundantly clear that they were together, including one of them kissing at an arcade and another where Avery traveled cross-country to give JoJo a hug because she was sick.

However, long before these video, it had been concluded by the internet’s brightest lesbian gossip minds that indeed, Avery Cyrus and JoJo Siwa are definitely dating. 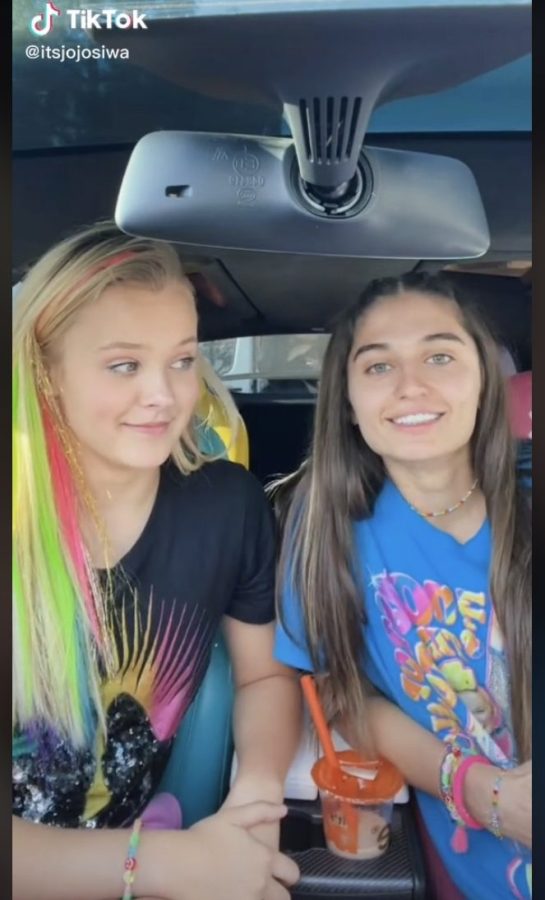 How did we get here? Who are these people? Well, as a 40-year-old person who once asked themselves the same questions and now has answers, I am going to tell you.

Avery Cyrus is apparently “one of the best-known LGBTQ creators” on TikTok, with nearly 8 million followers. She began her TikTok career in June of 2019 and, since the summer of 2020, had been dating another famous lesbian influencer, Soph Mosca.

In early August of 2022, Avery Cyrus and Soph Mosca announced on TikTok that they’d broken up. This occurred around the same time as Fletcher’s “Becky” song and the contentious breakup of very tall NCAA basketball player Sedona Prince and her beloved less-tall girlfriend Riley, a flurry of niche celesbian relationship drama that is best explained by this TikTok. 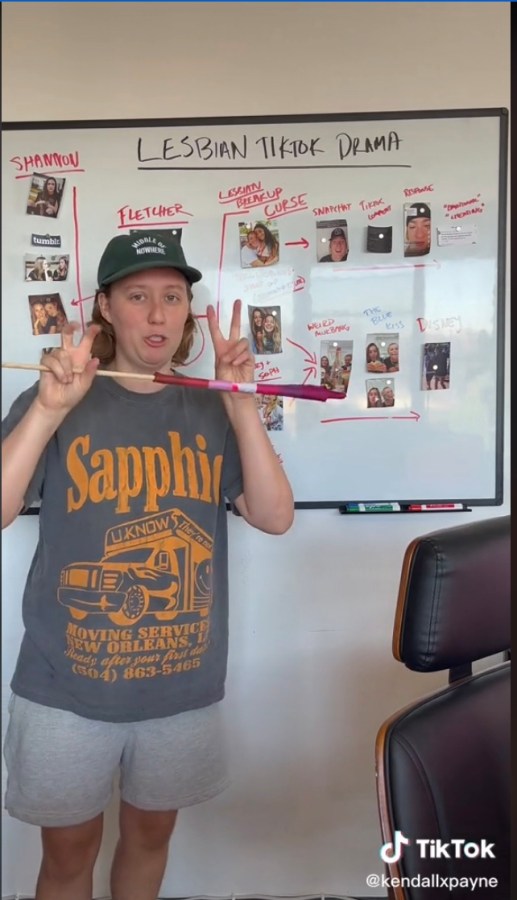 Within days/weeks of Avery and Soph’s breakup, Avery and JoJo Siwa were spending a noticeable amount of time together, despite the fact that much like JoJo’s ex Kylie and your grandparents, Avery seems to live in Florida.

(Sidenote for clarification: Kylie lived in Florida during her relationship with JoJo but recently moved to Los Angeles.)

According to Pulitzer Prize winning website FamousBirthdays.com, “[Avery] has earned massive renown for her lip-syncs and clips from her everyday life often in sketch form.” She attended the University of Houston and enjoys skateboarding. Her real last name is Blanchard, which begs the question: is she related to Rowan Blanchard? She is not. She is not related to anybody besides her younger brother, Jake.

After Avery Cyrus’s breakup with Soph, Avery and JoJo did a Mukbang. A highlight of that specific video is a commenter named Heather who wrote “RUE. WHEN WAS THIS.”

A few days later, Avery, who often does fun crafts projects on her TikTok, turned her white canvas high-tops into glitter shoes and a commenter asked if they were JoJo inspired and she confirmed that in fact they were. This is similar to when my girlfriend pointed out that I was wearing socks with sandals and she always wears socks with sandals and I was like, “yes, the fact that you are cool and yet frequently wear socks with sandals has empowered me to do the same.” She thanked me for my honesty.

At some point around this time, JoJo Siwa and Avery Cyrus were spotted together at Disneyworld, commonly known as “the happiest place on earth” and also a favorite date spot for Ms. Siwa.

On August 17, Soph and Avery did a video together to assure the internet that there were no hard feelings and they do not hate each other.

Around August 23rd, Avery was in Los Angeles and showed up on JoJo’s Dad’s instagram and spent some time in a photo booth.

On August 26th, JoJo was apparently curious if she could “look like a little boy” and enlisted Avery’s assistance in this experiment. (It was a success) 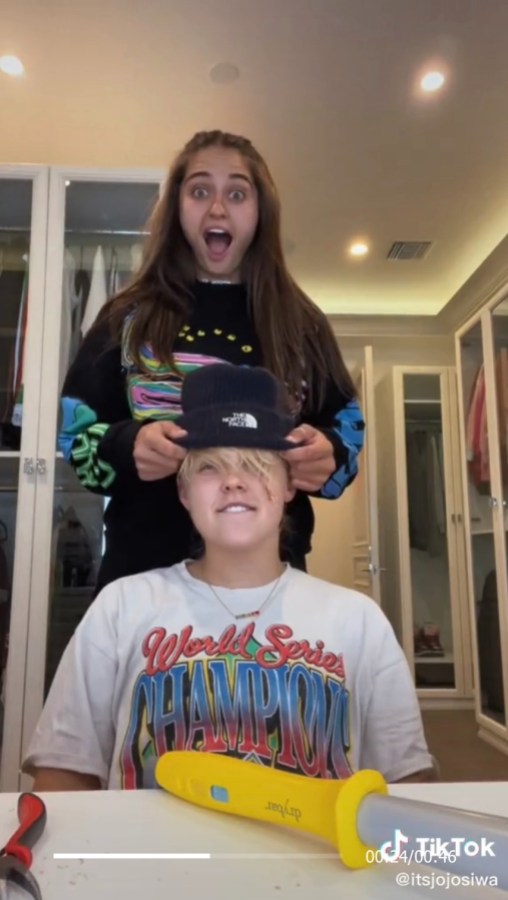 On that same day, TikTok Lesbian Gossip Queen Kales said a trusted source had informed her that there was no overlap in Avery’s relationships with JoJo and Soph which means that nobody cheated!!

On August 29th,JoJo and Avery did a dance together. Kales posted commentary over the video of Avery and JoJo dancing in their shared hotel room, noting, “the eye contact. The matching wedding outfit, and the fact that there’s a suitcase on the second bed.”

Then, Avery’s ex Soph posted a video to TikTok that revealed she has an enormous kitchen, a sparsely occupied pantry and a dryer that I suspect contains a portal to another timeline. In the voiceover, laid atop the dulcet tones of “Sad Emotional Piano (main version),” she explains that “breakups don’t have the power to determine whether love is real or not. The future love between the two people may not exist, but the love they shared during the relationship can never die,” which is in fact true! She cited examples of love surrounding us all that included “the way I brush my hair from bottom to top,” a practice that I did not understand until my colleagues explained it to me.

Meanwhile in the general realm of August 29th at the best Target in Dubuque, Iowa, an innocent lesbian on an evening shopping trip spotted none other than JoJo Siwa and Avery Cyrus wandering the storied aisles, and noted, “that is a lesbian couple if I have ever seen one. They were waffle hand-holding in the aisle of Target, there was some heavy forearm like — flirty touching, laughing, joking around. They were all over each other. That is a lesbian couple, I swear on everything I own. I wouldn’t lie about something this serious.” TikTok added a warning to this video that, as Soph already knows, “participating in this activity could result in you or others getting hurt.”

What were JoJo and Avery doing in a Target in Iowa, you may be wondering! Well, JoJo was attending a family wedding and brought Avery as her date. They also went to the shoppes and attended a football game played by JoJo’s cousin.

By this time, all of celesbian gossip TikTok was going bananas over the optics of this situation: that mere (figurative) moments after her breakup with Soph, Avery was (seemingly) in a relationship with an incredibly public figure. Every TIkTok of the twosome was riddled with comments lamenting how Soph must feel about all of this.

Thus Avery took the initiative this weekend to set the record straight on one of Kales’ videos, in response to a comment that agonized: I literally can’t believe Avery just up and left like that for someone else after being 2gether for so long.

In response, Avery explained that their relationship ended because they weren’t happy, that they had broken up and gotten back together again, but ultimately “couldn’t figure out how to be good together and for each other.”

A commenter clarified that the breakup wasn’t the issue, it was that Avery and JoJo were
“posting together & feeding rumors online 5 days later.” Avery continued the clarification trend by clarifying that it had been two weeks, not five days, because the breakup video had been posted far after the breakup. Nevertheless, she acknowledged that “yeah I should have thought more about what I posted after.”

As we plowed headfirst into September, as mentioned in the introduction to this post, the twosome have posted several romantic videos together that make it abundantly clear that they are together because you know, they’re KISSING IN PUBLIC and stuff. JoJo also made an official acknowledgment of Kales, the tiktok lesbian gossip prince who keeps us all up-to-date on all relevant JoJo Siwa relationship information.

In conclusion, JoJo Siwa and Avery Cyrus are in a relationship, they seem very cute and happy together, and does anybody know how we could get JoJo to wear a “Who All’s Gay Here” T-shirt and tag us in the post