Jill Bennett & Cathy DeBuono did it up right last weekend with a screening & outdoor bash to celebrate the Season 2 premiere of their labor of love, We Have to Stop Now.  Although the series was created for the web, it was shown on the BIG SCREEN as a two-hour feature film for those lucky enough to bribe their way in.  The premiere party was complete with a red carpet, Autostraddle’s Nat Garcia doing interviews and live performances from out rock singer Corday and the band Kelly’s Lot. Remember how we all bitched and moaned that some shows did not reflect “they way that we live?” Well, guess what – this show actually does mirror relationships in a version of reality that rings true… particularly for those of us who love to process feelings and appreciate therapy. 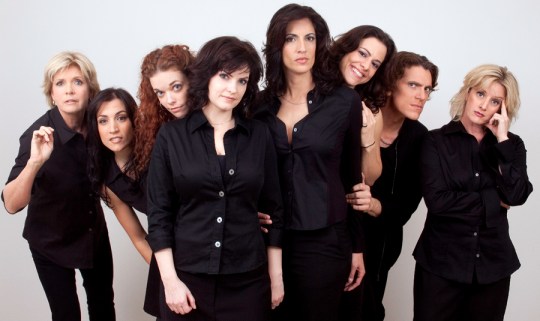 The Plot in a Nutshell

Season 1 established Dyna (Cathy) and Kit (Jill) as married therapists struggling with their relationship following the success of their book, “How to Succeed In Marriage Without Even Trying.” Comedian Suzanne Westenhoefer rounds out the cast as their therapist with the show’s writer/creator Ann Noble as Kit’s stoner sister who plays the wise fool. Season 2 takes those characters and amps up the comedy, depth and pathos. The storyline between the two sisters (Noble and new cast member Maryfrances Careccia as Dyna’s sis) is particularly moving, adding an unexpected layer of sexiness and authenticity beyond the ushe Jill & Cathy chemistry-fest. 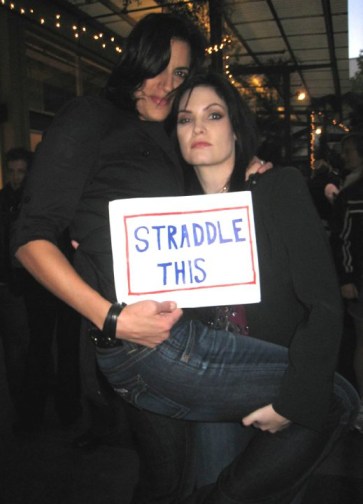 Ya know what else is exciting this season? Guest stars! Early in season 2, Dyna & Kit decide to shop around for another therapist and consult with twin shrinks played by Meredith Baxter in her first role since coming out. Once the story conveniently puts everyone on the Sweet cruise (they filmed much of the season on board a ship sailing into the eye of a hurricane, FYI) the celesbians come fast and furious with appearances by Erin Foley, Nicol Paone, Dani Campbell, Kate McKinnon, Corday and the cast of CherryBomb (aka The Lesbian View). Back in November 2009 we were on set with Jill & Cathy while filming at sea.

.
Here’s the deal. This shit ain’t free. Jill, Cathy, Ann [DynaKit Productions] and the entire cast & crew poured their heart and soul into this project. They worked (and convinced other people to work) for very little pay and were able to put this thing together thanks to investors, sponsors and a lot of blood, sweat & tears. In exchange for $24, you’ll get 16 episodes [rolled out weekly] plus special features and live feeds with the cast. Unforch, season 1 is no longer free online but it will be released later this year by Wolfe Video. Having seen both seasons in their entirety, I’d really recommend the series to anyone (even your mom!), as it’s not exclusively “gay” but presents its gay characters with total nonchalance and that is a welcome change in the current state of media. Also, there’s a centerpiece sex scene that gives Bette & Tina a run for their money.

Cathy & Jill answer a pressing question regarding their love scene in season 2: