Even though Piers Morgan seemed to threaten her on twitter last night, when he tweeted out that he wanted Janet Mock back on his show to debate his “supposed ‘offensiveness’ live on air,” Mock agreed to come back, saying she is “Looking fwd to a fruitful discussion.” While Mock was able to make some good points and share more of her perspective on why it was offensive to say she “was a man until 18,” the discussion wasn’t quite as fruitful as I’m sure Mock was hoping it would be.

The segment started out with Morgan being completely incredulous, saying that he was “shocked when (he) became targeted by a lot of very, very angry people.” After introducing Mock, he then demanded that she explain to him “why I had to go through this.” This was the first time that he defended himself by reading off a resume of all the gay rights he supports. Mock, being the gracious one, actually apologized (something Morgan never did), saying “I’m sorry you feel annoyed and I think people in the trans community feel equally peeved.” Morgan seemed especially annoyed that Mock didn’t call him out during the interview if she found his statements so objectionable. Mock responded to this by saying that since this was her first appearance on a mainstream show, she was scared and “wanted to be a cordial guest.” She later added that, “if I called out people every time they misnamed or misidentified me, i wouldn’t have time for real issues.” Morgan wouldn’t hear it and insisted that since he was nice and complimented her, she should have been grateful, to which Mock replied with a quote that I think perfectly sums up the message that “allies” like Morgan need to hear – “being offensive and being kind are not mutually exclusive things.” 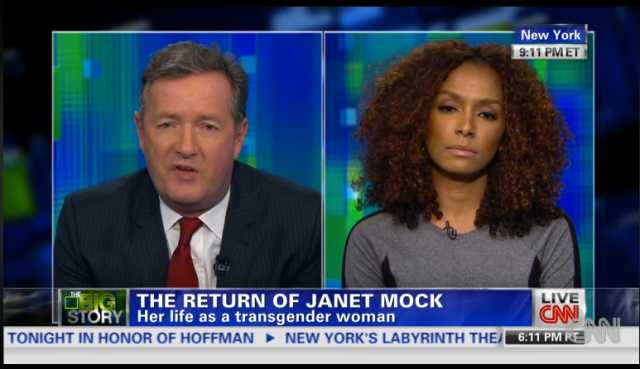 Janet’s face sums up my feelings about this interview

When he wasn’t busy saying that he’s a great ally and how supportive he is of “gay rights,” Morgan kept on pointing to a 2011 Marie Claire article written by Kierna Mayo about Mock titled “I Was Born a Boy.” Whenever Mock would say that she was “born a baby” or that she never identified as a boy, Morgan seemed very annoyed and waved around this article, saying that since she said she was born a boy three years ago, he had every right to do so now. It didn’t seem to matter to him that Mock repeatedly told him that she didn’t write the article, she didn’t come up with the headline, she’s written blogs criticizing the article and even talks about how problematic it is in the introduction to her book. In a blog entry on her website also written back in 2011, she says basically the same things she’s been saying to Morgan this whole time, that this kind of misgendering is offensive and harmful.

But I do wish I could change one thing in the piece: the term “boy” which is used a few times. Overall I’m fine with it because I was born in what doctor’s proclaim is a boy’s body. I had no choice in the assignment of my sex at birth. I take issue with the two instances in the piece: The first instance proclaims, “Until she was 18, Janet was a boy,” and then it goes on to say, “I even found other boys like me there…” My genital reconstructive surgery did not make me a girl. I was always a girl.

Morgan finally stopped talking about the Marie Claire article (which apparently was the only research he did on Mock for an interview that was supposed to be about her book, Redefining Realness) when she told him that “that piece should not have been the basis of our interview” and “my life is in Redefining Realness,” which I’m sure she thought the interview was going to be about. However, he still insisted that he did nothing wrong.

The main problem he seemed to be having was that he was still considered her a boy until she had surgery. Despite her saying “I was a baby, I was assigned male gender because of my genitals” earlier in the interview when asked if she was “a boy until 18,” he asked her again and again, “do you dispute that you were born a boy?” He told her “I don’t think that terminology is wrong,” and asked her to explain to him why it’s offensive to say that she was a boy, when the phrase “gender reassignment” means that she went from male to female. Mock told him that “it’s not about what surgeries I may or may not have had” and she didn’t start identifying as a girl when she “went to Thailand,” she started identifying that way “as soon as I had enough agency” to actually know what identifying as a certain gender meant. 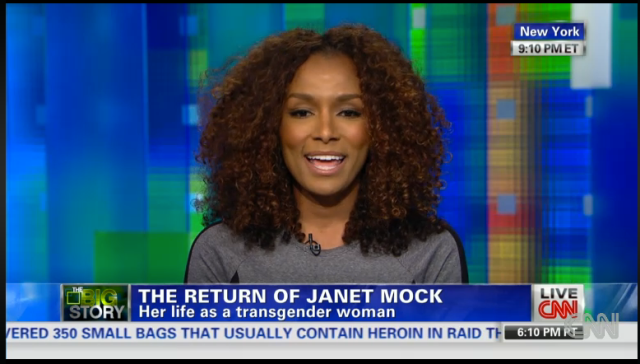 Again, Morgan revealed exactly what kind of trans ally he is throughout the interview. When he was asking why Mock got so upset, he explained to Mock, “I’ve always been supportive of gay rights and gay marriage.” Mock shut that down immediately and told him “gay rights are not transgender rights” and that supporting gay marriage does not make him an ally to trans people.  Still, spoke down to her, offering her unsolicited advice and saying “it doesn’t do you or your community any service to make me look bad.” It’s bizarre how good he is at making this issue revolve around him and his feelings.

Things got really strange after Mock left and when Morgan brought on a panel to discuss the interview just moments after it ended. Two of the panelists, Amy Holmes and Ben Ferguson were just as bad as Morgan, and the only redeeming quality of this segment was Marc Lamont Hill’s contributions. Holmes started off by saying that Mock shouldn’t be upset that she was misgendered because the only reason she is on TV is that she was born with male genitalia and that that’s a “pretty sensational story.” So apparently her activism, speaking, advocacy and writing don’t matter at all. Hill responded by saying that trans identity does not hinge on surgery. He then pointed out that perhaps Morgan isn’t quite the trans ally he thinks he is and that he sounded like “when white people point to the number of black friends they have” every time he tried to say how supportive he is of the LGBT community. It all went downhill when Ferguson had a chance to speak, which he somehow decided to use to shout things like “this is fake outrage,” “she was born a man,” and “doctors and science agree with me on this one!” 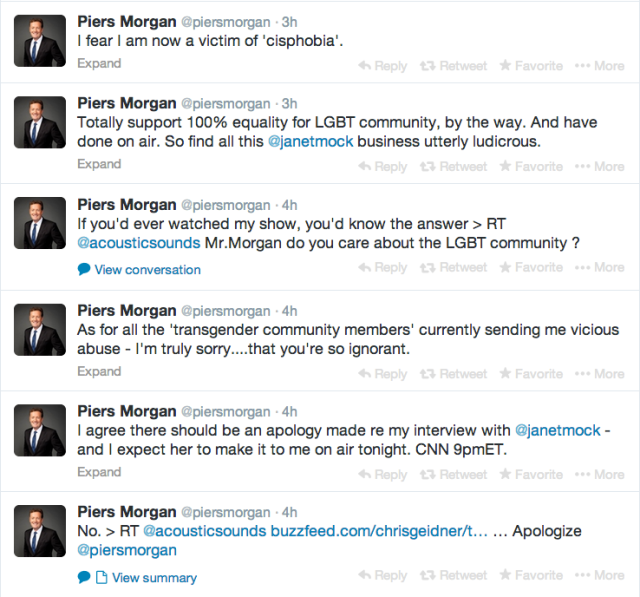 Overall, it didn’t really seem like Morgan learned much or really realized what he did wrong. He ended this part of the show by saying that he has learned that “there’s a difference between sex and gender” which kind of totally misses the point. It still would have been offensive if he had spent half the initial interview saying “she was a male until she had surgery at the age of 18.” Morgan really seems to have some really fundamental misunderstandings about how oppression works. He seemed to think that trans people calling him transphobic is just as bad as the oppression that trans women of color face every day. He tried to make himself into the victim, and even though he invited Mock back on his show, he clearly didn’t want to listen to her or learn from this experience. It would have been nice to see a wealthy, white cis man with all the privilege in the world be quiet for a little while, listen to a trans woman of color and actually learn from his mistakes, but unfortunately, that’s not what happened tonight.