It has arrived! The day is here! The Supreme Court began hearing oral arguments about marriage equality this morning. First, a quick refresher on the situation. (Amy Howe at the always-excellent SCOTUS Blog has already broken down the case for you in accessible terms here and here, also.) 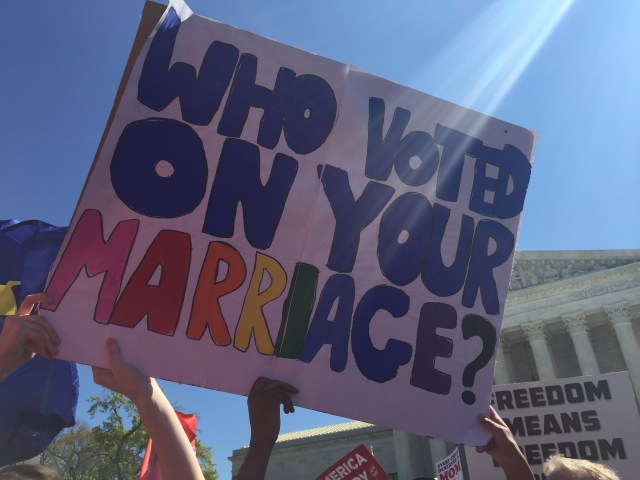 This hearing is actually about four different suits from four different states: Obergefell v. Hodges, Tanco v. Haslam, DeBoer v. Snyder, and Bourke v. Beshear, all same-sex couples suing for their marriage rights. This also means that there are a lot of lawyers involved; it’s basically an attorney clown car in there. If things seem confusing, that’s because they kind of are. You can learn more about the lawyer lineup here.

The bottom line, though, is that the court will ultimately answer two major questions: 1. whether it’s constitutional for states to ban same-sex marriage, and 2. whether states have to recognize marriages that were performed legally in another state. No matter how the court rules, they won’t be creating any new rights, but they may be saying that states can’t restrict access to rights we already have. Essentially, they’ve assigned a lawyer to each question, with veteran marriage equality power player Mary Bonauto arguing the first question and Douglas-Hallward-Driemeier the second. The states’ turn on the questions is represented by John J. Bursch and Joseph L. Whalen respectively.

In terms of the legal arguments being relied upon by both sides in this case, they’ll probably both seem pretty familiar if you’ve been following similar cases over the past few years. The plaintiffs, the people asking for marriage equality, argue that they deserve access to the same marriage rights as different-sex couples have, and that marriage rights will allow their families to be stronger and children better off. States that want to ban marriage equality argue that this is a state’s rights issue, that the individual citizens of their states should be allowed to define marriage and that states shouldn’t have to defer to the laws of other states by recognizing marriages performed elsewhere.

As I am tragically unable to attend the court proceedings, most of my information is coming from the SCOTUSblog’s liveblog of the day as well as transcripts from the court. 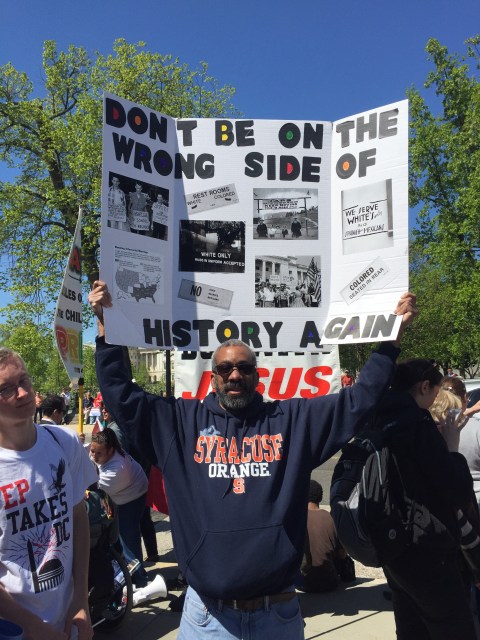 The planned two and a half hours of oral arguments began with justices asking the petitioners questions surrounding the first question: whether it’s legal for states to ban same-sex marriage. This portion was a fascinating, if sometimes kind of alarming, discussion on cultural and historical issues surrounding same-sex relationships and marriage, as well as what marriage really is as an institution. Kennedy wondered whether the “change” to the definition of marriage felt sudden, and Alito at one point bafflingly pointed out that the ancient Greeks were okay with male homosexual relationships but didn’t have same-sex marriage rights, as well as throwing in a hypothetical question about polygamy for good measure. More hearteningly, Eric Citron reports that “Justice Ginsburg spoke of how it was recent changes to the institution of marriage that made it appropriate for gay and lesbian couples — in particular, it becoming an egalitarian institution rather than one dominated by the male partners who determined where and how the couple would live.”

A potentially important conversation occurred between Scalia and Bonauto when he asked whether, should states be prohibited from banning same-sex marriages, ministers would be required to marry same-sex couples — essentially asking about “Hobby Lobby” rights when it comes to gay marriage, an issue which Abby coincidentally broke down just yesterday. Bonauto was able to reassure Scalia that no religious leader would be forced to perform a same-sex wedding if they didn’t want to, using as an example the fact that many rabbis refuse to marry Jews and gentiles free of legal repercussions. Citron reports that overall “The questions were fairly free floating; not a lot to indicate whether the Justices were thinking more in terms of equal protection or a due process right to marriage.”

Justice Breyer pressed Bonauto to explicitly and directly answer the question of why this change should happen now when “the opposite view has been the law everywhere for thousands of years among people who were not discriminating even against gay people, and suddenly you want nine people outside the ballot box to require States that don’t want to do it to change what you’ve heard is change what marriage is to include gay people. Why cannot those States at least wait and see whether in fact doing so in the other States is or is not harmful to marriage?” Bonauto brought up Loving v. Virginia in her answer, pointing out that legalizing interracial marriage wasn’t a popular decision and many also wanted the courts to “wait and see” in that case, but that individual liberties trumped those concerns.

After asking Bonauto for her input on the first question, whether states should be able to ban same-sex marriages, the justices had a chance to question the states on the same issue. Also, however, the United States government itself was allowed to present arguments in the courtroom through Verrilli, who represented the Obama administration and argued for marriage equality. As for why the federal government is allowed to argue in a case about four states’ laws, SCOTUSblog offers that “The United States participated in this case as an amicus supporting the petitioners (the couples). Ordinarily, amici don’t argue before the Court, but the United States is an exception. The Court deeply respects the Government’s view, and so the United States’ motions to participate in argument are usually granted. Here, the Solicitor General urged the Court to recognize a right to same sex marriage.” 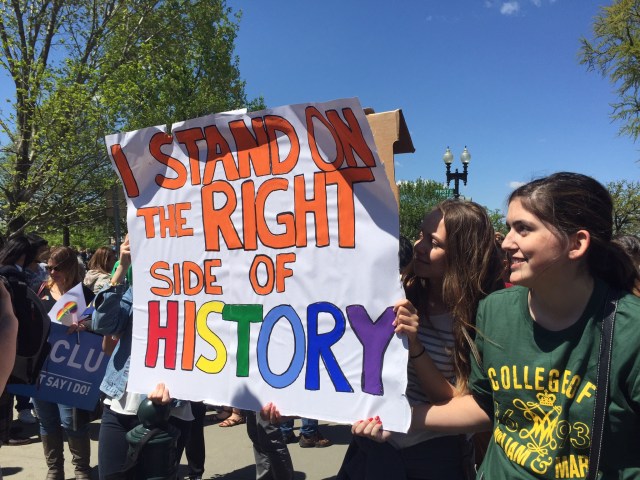 Kennedy brought up the ideas of denying marriage to same-sex couples as an indignity to them, and the fact that many same-sex couples raise children as an obstacle to the states’ procreation arguments. The states were also asked to explain if, assuming the state is legally able to refuse to recognize same-sex marriages performed out of state, the state should also be able to refuse to recognize different-sex marriages performed out of state. The states tried to argue that the states should, which was received with some skepticism.

All in all there was a bit less focus in coverage on the second question — should states have to recognize marriages performed in other states — largely because the significance of the first question steals the show a bit, and because if the court rules in favor of marriage equality on the first question, the second question will be moot. It was fleshed out in the courtroom, however, that if the court ruled in favor of marriage equality on the second question, a hypothetical same-sex couple living in a state where marriage was banned would be able to travel to another state, get married there, and then return home and have their marriage recognized by their home state.

It’s impossible to know how the court will rule; we won’t actually find out until June. In the realm of potential outcomes, it’s possible that the court will rule in favor of marriage equality on one question but not the other (ex. states have to recognize out-of-state marriages but don’t have to allow them in their own state) or that conservative justices might try to rule in favor of marriage equality only so that their ruling can impose restrictions upon it. The only-one-question-out-of-two idea only really works in one direction, though; if all states are required to allow marriages, then the idea of not recognizing another state’s marriage is sort of meaningless.

If you’d like another take, SCOTUSblog’s Amy Howe has her thoughts here!