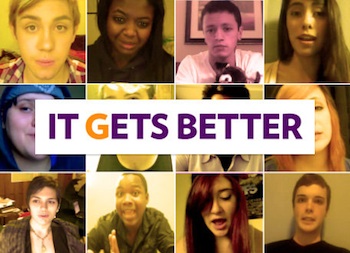 The It Gets Better project is graduating from your 13 inch laptop to the big screen in your living room in an upcoming MTV/Logo presentation. The 60 minute special will take viewers inside the lives of three young people at different stages of coming to terms with their sexual orientation and gender identity. #ItGetsBetter co-founder, Dan Savage, says:

“The lives of these three young people will resonate with millions of teens –- gay and straight — who are being bullied for simply being themselves. It’s so important they know that things get better and that living openly and honestly and being who you are makes it better. They have so many great moments ahead of them and they will do things they never thought possible – so long as they keep fighting, stay positive, and stay with us.”
.
Savage will host the special which also features appearances by Margaret Cho, Zachary Quinto, Chaz Bono, Scissor Sisters’ Jake Shears, Adam Levine and the man who should have beaten Jesse Camp in his Wanna Be a VJ days, Dave Holmes.
.

.
Interestingly, this isn’t Dan Savage’s only MTV collaboration, as he has signed a deal to host his own version of “Loveline” titled “Savage U,” set to premiere this spring. The show will follow Savage as he travels across the country to different college campuses, talking to teenagers about how to navigate sex and modern relationships. Riese should clearly co-host.

I’d like to take this opportunity to share my personal fave It Gets Better video featuring the creators and stars of the funniest lesbian web series ever (which just began its second season), The Slope.

“It Gets Better” premieres on MTV and Logo next Tuesday, February 21 at 11PM EST.