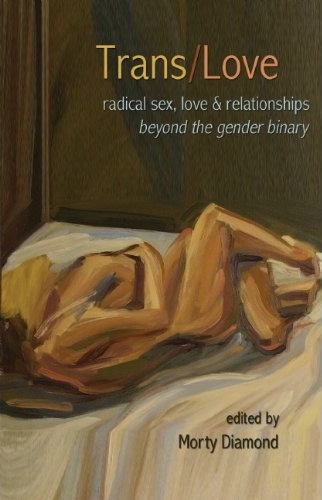 Trans/Love: Radical Sex, Love & Relationships Beyond the Gender Binary, a recent collection from editor Morty Diamond, is intensely personal and sexy, but is about far more than sex — instead, it explores the many ways of navigating love and self across the gender spectrum.

abounds with excellent writing from established and new authors alike. But what separates it from other collections is the sheer diversity within its pages. Trans/Love

“So many books are out there right now that focus either on one specific person’s transition and everything that encompasses that, which includes relationships and sex and all that stuff, but you get such a broader view of the community when you do an anthology,” says Diamond in an interview with Autostraddle.

The collection develops on Diamond’s earlier anthology, From the Inside Out, which featured coming-out stories from writers on the trans-male and masculine side of the gender spectrum.

“As I grew older and transitioned myself, and started to learn more about the trans community at large, I just realized wow, there’s so much to be said from the whole range of perspectives: trans women and trans men and everything in between. At least for this anthology, I decided yes, I definitely wanted to work with trans women, and I’m really glad that I did. Their voices deserve to be heard just as much as trans male and masculine-identified people,” says Diamond. “I guess as a trans man, I personally feel like there’s not enough co-mingling of the voices between trans men and trans women, and I would like to be a part of furthering that.”

Representing a variety of perspectives and paths was also important to Diamond on a personal level. In his contribution to the anthology, Diamond discusses how his own transition “did not follow a normal trajectory,” and that he has struggled with his gender identity.

“When you’re in the trans community, you really hesitate, and justly so, to ever ever make broad statements like, ‘Well, this is what all trans men think / This is what all trans women think.’ I can only say for myself that […] for me, I felt like I wanted to look male but I didn’t know if being on hormones was going to be the very best thing for me,” says Diamond. “I was on hormones for five or six years, and then I stopped and I realized, I really like that all the nuances of gender are in my brain but are not necessarily on my body. Because I look like a dude. I have a beard, I got chest surgery; I look like a dude and I’m very happy to look like a dude, but in my brain, all kinds of things exist in terms of gender and gender identity, they all co-mingle with each other, and thankfully I have a partner that understands this about me and fully accepts it and enjoys it, celebrates it. I’ve definitely found my own personal perspective on gender.”

Diamond recently started an online literary magazine called Bodies of Work, which focusses on trans and gender-variant art and literature. The featured artists and writers, which currently include Max Valerio (who contributed to Trans/Love), DJ Michelle Love, and the band Schmekel, will span all gender representations and art from music to performance art to literature and poetry.

“I realized what I like about doing anthologies is working with other people and seeing what their artistic output is,” says Diamond. “I’m excited that there will be this place for people, if they want to know about trans and gender-variant identified artists, they can come to this site and take a look and see what we do. I’m really super excited about it.”

Diamond has also applied for a grant from UC Berkeley, where he is finishing up his bachelor’s degree in sociology, to do an expansive oral history of trans people who transitioned over twenty years ago. He hopes to travel in order to film and archive their voices.

“It’s about the people in the community that transitioned and did all that stuff so long ago when things were really tough, and really finding out what that history was like. I think there’s little bits and pieces of it in books right now, but there’s no real compilation of voices, of oral histories, so that’s what I’m looking to do.”

Visit Bodies of Work, or get Trans/Love on Amazon. Several contributors also read from their collection pieces on YouTube.