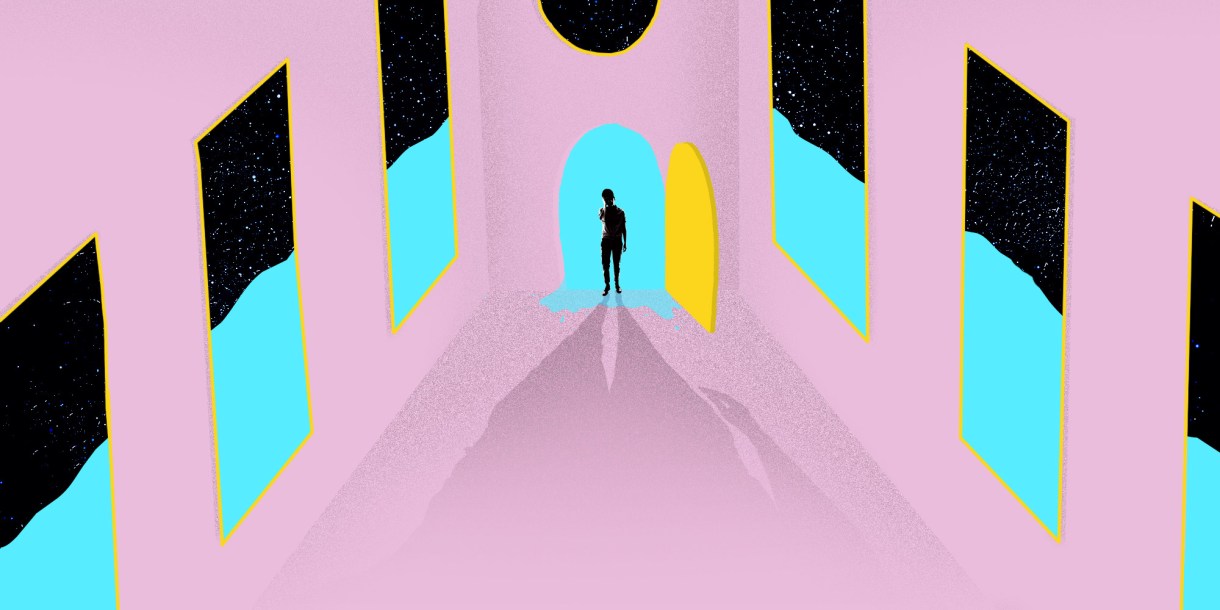 I used to break into houses. Often they were uninhabited, skeleton homes in rich neighborhoods on the edges of the valley, being built at leisurely speeds while their owners prepared for their move to Napa. It was an open secret amongst sexually active teens that you could fuck in the empty houses in Browns Valley and no one could see you, especially at night. But I never took guys there, or even my friends — whose intimate touches and talks during our night adventures meant way more to me than my very serious long term boyfriend. I only broke into houses when I was alone.

Not just houses, actually, lots of buildings. The gymnasium at my high school was an easy target, there was a huge crawl space under the building and ladders to the roof. All I needed was a flashlight and a little elbow grease to push the dumpster up to the metal ladder that stopped about six feet off the ground. I explored the gym, the theater classrooms with the easy-open windows, the sheds with spare couches shoved inside them during the summers. All of this for a thrill while I roamed largely unsupervised in my small town.

The houses were different though. I didn’t break in just to prove that I could or to give myself a rush during uneventful stretches of adolescence. I would jimmy the locks of houses for sale, enter through a broken back door of an abandoned place. I liked discarded spaces better than the expectant energy of new homes. Browns Valley mansions were cavernous, with high ceilings and extravagant chandeliers with no bulbs to light them. The kitchens had marble countertops that were cold and empty, and gaping holes waited for stoves and refrigerators to fill them. I preferred the cramped one and two bedrooms wedged between the new buildings. Light snuck in through boarded up windows and illuminated dusty floors where carpet had been ripped mercilessly at the corners. Graffiti blended seamlessly with carpenters’ orange demolition instructions on the walls, neither of which I could decipher. Things were out of place, strewn about as if the house had been picked up and shaken. I found a toilet in the front hallway filled with dirt, a hammer left on a rocking chair in the backyard.

“It always felt haunted, no matter how new or even unfinished a home could be.”

I could hear myself so loudly in these empty spaces, I took up so much room. The pressure of my foot on the stairs, the small rush of wind as I breathed into rooms where maybe people once slept, families had grown, kids had played. It always felt haunted, no matter how new or even unfinished a home could be. A house is designed for people to live in it, to take up its space and to fill it completely. Intruders subvert the entire concept. Intruders are alone, with their own agenda, not staying or nesting, but making their presence felt nonetheless.

My overt confidence in my transgressions only made me bolder. I was ready to be caught at any time; my whiteness and desperate gender conformity meant being largely ignored by neighbors and cops. I was a quick thinker and knew how to talk my way into a harmless slap on the wrist should I be confronted by any adult. I craved that isolation, that feeling of utter aching loneliness that I found inside houses where I did not belong.

I had gone on a trip with my boyfriend and his family to Lake Tahoe. He had teased me and joked with his sister about how cold the water would be. It was only spring, and Lake Tahoe is just melted snow. I knew I could handle it, I had been a lifeguard for years. His family sat on the dock, toes grazing the clear lake, surrounded by trees and mountains. We stood in the shallow water, slowly slowly slowly inching our bodies deeper. He held my hand and I wished he wouldn’t but I allowed it. It was the coldest water I have ever been in. We waited patiently (with the determination I have only seen in teenagers) for each centimeter of skin introduced to water to go numb before easing in further.

By the time we were chest deep in the lake our limbs felt like dead appendages swinging from our bodies and our lips had turned blue. I thought about the pools I had been working long hours at during the summers, how I had to help maintain the temperature around 85 degrees for patrons. I had checked that morning and the lake was about 40 degrees. I was adapting though, my body had stopped shivering and was now gliding through the water, feeling even the tiniest rise or fall in temperature, naturally seeking warmth.

“My body still felt leaden and strange, but I wanted to get as far out as possible.”

I took the plunge. The water was murkier and somehow even colder as I dove deeper, I felt plants and little fish around my feet and kicked at them, my heart fluttering with fear and excitement. My chest felt tight and it was a little hard to breathe, but I was grinning as I swam, away away away from from the shore. I could see the middle of the lake and moved toward it. My body still felt leaden and strange, but I wanted to get as far out as possible. My boyfriend followed. He shouted to come back to the shallow end, where you could touch ground if you wanted. I grinned and splashed and told him I was swimming out, as far as I could, as far as my body would take me. His blue lips were trembling as he tread water on the precipice of the deep.

He yelled to me. I stopped swimming, confused. Was something wrong? Was he hurt? He yelled again for me to come back. I hesitated, and he swam closer to me. He told me he didn’t want me to swim any farther, that it was dangerous and the water was cold. I didn’t understand — he and I lifeguarded together, he knew I was a strong swimmer. I was one of the best guards, and one of the strongest. He dismissed my insistence that I was fine, that I was safe, and I could feel him start to get angry with me, even from across the lake. He asked again, pleading this time, please please please.

“Please come back. I would never forgive myself if something happened to you.” That was always the refrain, right? How could he live knowing he had allowed me to put myself in danger. Allowed myself to dangle haphazardly over a threat without thinking of how my body was connected to his? The reality of the threat wasn’t the point. How could I ask him to untie himself from me? On the shore he wrapped me in a towel and his arms.

“I would replay that feeling, the feeling of danger and joy exploding from my nearly-hypothermic chest as I opened cupboards, tried the handles on broken toilets.”

I thought about the lake a lot as I broke into houses. I would replay that feeling, the feeling of danger and joy exploding from my nearly-hypothermic chest as I opened cupboards, tried the handles on broken toilets. I thought about how it felt to be looked after, to be taken care of. I thought of the men who made me feel safe. I looked in attics and thought of how I would lay with my boyfriend in the back of his truck and our extremely safe sex with maximum physical barriers and minimal feelings. How he frowned and shook his head when I referred to “fucking” and corrected me — he only ever wanted to “make love” to me. I tried locked doors and jiggled keys found under flower pots and pushed away thoughts of the wet dreams about women whose bodies were so large, so vast, they were giants I could get lost in.

I would lie about my parents confiscating my phone, about being unreachable to him as I carved space inside of these houses to be alone. I turned my phone off, or even left it at home on my bookshelf. The darkness inside a house with shuttered windows was good enough to get gone from the girl who had let herself be dragged to the lakeshore. I did not have to perform as I trespassed inside an empty house. I did not think about how my clothes hung on my body or how my shoulders had slid back down into my signature slouch. The way my body shrank away from this boy who loved me, the way my stomach lurched as I thought about girls I thought I hated, the way I spluttered and coughed as I tried to force feed myself years of a relationship that was slowly drowning me.

“I was an an intruder in this space not made for me.”

None of it mattered inside these four walls that did not belong to me. I was an an intruder in this space not made for me. What I was doing was wrong, and thoughtless, and troublesome to any passersby. And it felt good. And as I lay down on the rough, unfinished floors and looked up through open ceilings at the stars, I could accept myself. This wrong, clearly broken girl who did not know or appreciate love. This terrible girl who did dangerous things and scared the boy who loved her. This foolish girl who took reckless risks in order to feel as alone as possible. How ungrateful she must have been, to treasure her solitude over a man’s touch, a man’s words, a man’s attention. I could be fine with this girl in the dark, so far away from where I was supposed to be.

I could feel myself become like a ghost — existing incorrectly, but damn it, I was there. Just like all the past and future tenants whose energy kept these houses from ever being truly empty, I was a presence all on my own. I was taking up space, demanding to be felt and not only to feel.

Kelty is a writer in Berkeley, CA. They work with teen girls and are a pretty good plant parent. They read and write a lot of horror fiction by and about women, and would like to talk about the movie "Gone Girl" with you. You can contact them at keltydennis@gmail.com.

Kelty has written 1 article for us.