A few months ago, Mary Kristene Chapa could only grip and release a ball 35 times. Today, she’s up to 60. These are the victories that give her hope as she continues her recovery after a June 2012 shooting that killed her girlfriend Mollie Olgin and left Kristene with paralysis.

Kristene’s recovery from the shooting has been grueling and expensive for her family. She suffers from PTSD and still struggles to do basic tasks like tying her shoes with her one fully-functioning hand. But when she speaks, her voice conveys a passion for life and hope for the future.

“Every day is a constant struggle with many obstacles, but there’s always a different path to follow,” Kristene said. “There’s always a way to go around the challenge.”

Kristene visits the park where she and Mollie were shot. Photo by Vivian Felten

Kristene just turned 21, and the event that occurred when she was 18 shapes her daily life. Because of the permanent damage to her left arm and near total loss of peripheral vision, she’s unable to drive or participate in the sports she used to love. She also has remaining bullet fragments in her brain. She still travels multiple times a week with her mom, Grace Chapa, to different physical therapies. The Saebo brace has been effective in improving her arm strength and coordination, but Texas’s limited Medicaid program didn’t pay for the therapy. The family continues to struggle with doctors and Medicaid to get Kristene’s physical and neurological therapies covered, and they’ve paid for procedures and equipment out of pocket.

The Chapa family has set up an ongoing page on GoFundMe to encourage friends, family and supporters to donate to help offset the costs of Kristene’s medical bills. They include extensive travel since she can’t get the care she needs in Corpus Christi, the city nearest to her home in Sinton, Texas. The family just learned that Medicaid won’t cover Kristene’s therapy with the Saebo brace. In over a year, the page has raised about $16,000 of the estimated $40,000 the family needs to ensure Kristene’s full recovery.

“[This process] has taken me away from the rest of our family, but we’re doing what we have to do,” said Grace Chapa, Kristene’s mother. “I tell her, ‘you have to do it, and you have to go on.’ There are better things for her in the future.”

Kristene actively pursues those better things. At the time of the attack, she was a brand new high school graduate preparing to start college. Three years later, she is once again registering for classes at a local college so she can begin getting her basic coursework out of the way this fall. Her longterm goal is to become a counselor or occupational therapist assistant, so she can help others who are facing challenges like hers.

“It’s sort of a motto for me,” she explains. She has already survived the worst, and she’s fully prepared to make the best out of life.

She’s working with a co-writer, Chivas Sandage, to write a book about her life before and after the shooting titled Salt Wind Redemption: Love & Murder In South Texas. Kristene and Chivas first came into contact after the shooting, when Chivas wrote a blog post about the tragedy. In November 2013, Kristene approached Chivas and asked for help with a book. They are seeking an agent to find the book a publishing home, Chivas says. The narrative weaves together Kristene’s own memories and ideas to form the beating pulse of the text.

“Her right thumb is writing for her, is writing for the book,” Chivas said. “She texts these long passages because that’s the way she’s most comfortable writing — with a cell phone. That tells you a little bit about how tedious writing is for her, how it is impossible to use two hands on a keyboard.”

Though a violent tragedy is the crux of the narrative, Chivas and Kristene agree there is much more to the story.

“At the heart of this book is a romantic comedy, that’s Kristene and Mollie and their incredibly vital relationship,” Chivas said. “They were madly in love, and they were hilarious, they were constantly cracking jokes. They are just two playful, fun loving young women. Even just now, I spoke about them in present tense.” 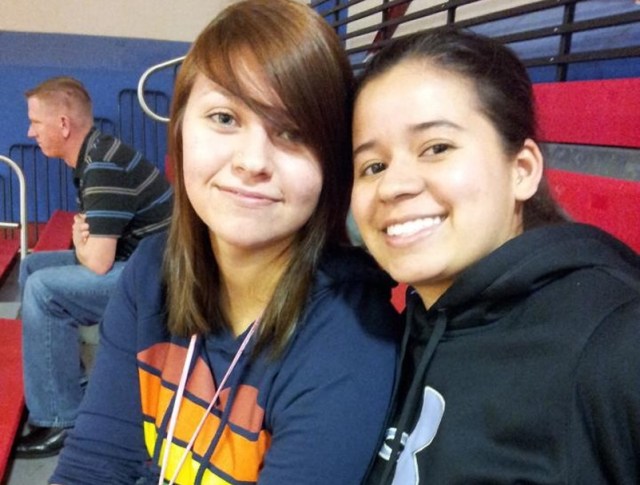 Mollie remains a presence in Kristene’s life. Throughout the year — on Mollie’s birthday, the anniversary of when they got together, and the anniversary of Mollie’s death — Kristene goes to place flowers at the park where the shooting took place. They were only together a few months, but they saw a long future ahead of them in a relationship full of love and big plans. Today, Kristene is focusing on her recovery, the book, and regaining as much of her life as she can. She’s dated since the shooting, but “I haven’t found a keeper,” she explains.

“It’s very hard because I have high expectations, I know what I deserve, and I won’t settle for less,” she said. “And they also have to understand that I’m not an average girl, I’m a responsibility. It’s hard because I’m different.”

Kristene hadn’t come out to her family or told them about Mollie before the shooting — which was hard for Mollie, who was out to her family. Grace said it was an adjustment for their family to know they had a lesbian daughter, but the family and the community has nothing but love for Kristene.

“It’s a first for us, but of course we accept it,” Grace said. “It can be hard, but I don’t see anybody staring at us saying that ‘you have a gay daughter,’ not here in town or anywhere. A lot of people come up to her and hug her and tell her she’s an inspiration, and everyone’s praying for her. We need all the prayers.”

Police arrested David Strickland on June 20th, 2014, almost exactly two years after the murder took place. He faces a capital murder charge, carrying a sentence of either life in prison without parole or the death penalty. Kristene and her family believe the attack, which took place at Violet Andrews Park in Portland, Texas, was a hate crime motivated by the fact that she and Mollie were a same-sex couple. The assailant robbed and sexually assaulted both women before shooting them, according to the arrest affidavit.

Texas hate crimes statutes do include sexual orientation, but as of now the case is not being charged as a hate crime. Assistant District Attorney Sam Smith couldn’t say whether they would present evidence at trial framing the murder as a hate-motivated crime and stated that it wouldn’t necessarily serve the case to do so.

“Any time you can tell the jury why something happened, it’s beneficial, but in Texas I do not have to prove why someone committed a crime. I just have to prove that they intended to and did in fact commit a crime,” Smith said. “We charged it as a capital murder because we feel we have the evidence to secure a conviction under that statute. A capital murder sentence carries the most serious possible punishment.” 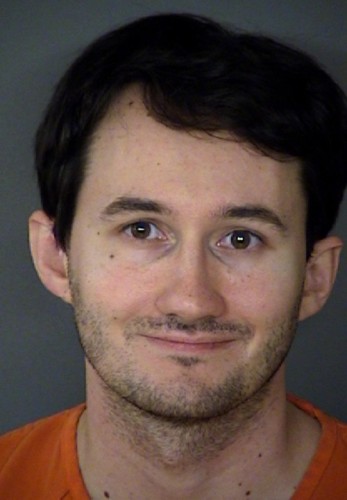 Kristene said she believes a life sentence without parole would be a step toward providing justice for her and Mollie. Today, Kristene’s main feeling toward David Strickland is pity.

“It makes me feel very sad for him that he would want to kill both of us just because we were a couple,” she said. “I feel very sorry for him. To want to kill someone you have to hate them so much. It’s pathetic.”

The alleged shooter and his family maintain his innocence. Before a November hearing when about 20 supporters of Kristene gathered in front of the courthouse urging a speedy trial, David’s father Larry Strickland said the public and media had decided his son’s guilt without giving him the benefit of due process.

“He’s been convicted in the news media without evidence,” Larry Strickland told the Corpus Christi Caller-Times. “The truth will come out.”

According to the Caller-Times report, bullet casings found at the crime scene matched a pistol in Strickland’s possession. His lawyers say Kristene did not identify the defendant in a photo lineup. 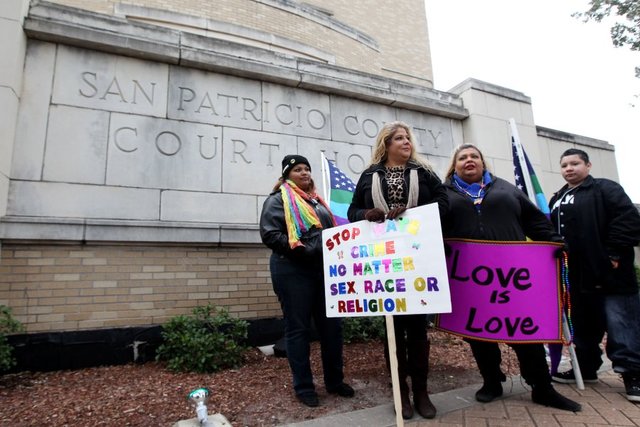 People came from all over Texas to support Kristene prior to a hearing related to her case in November. Photo via the Corpus Christi Caller Times

The LGBT community has rallied around Kristene, supporting her locally through supportive events like the one in November and nationally by supporting her fundraising effort and helping share her story. On May 10, she attended the GLAAD awards with Grace and Chivas and and received a standing ovation after sharing her story and giving heartfelt thanks in a speech.

“I know it’s a tragedy, but it also brings a lot of people together and shows all the great people out there that are willing to help and that have good hearts,” she said on stage. “This tragedy terrifies the LGBT community, people in my community. It’s hard to be gay in South Texas, but I believe that God loves everybody, no matter if you’re gay or straight.” 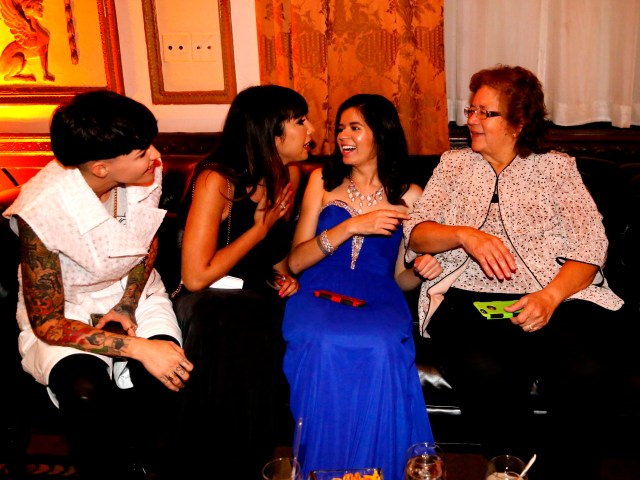 Kristene and Grace hang out with Ruby Rose and Jackie Cruz after the 2015 GLAAD Awards in New York.

You can see the whole speech here:

Kristene’s goal, she says, is to get a message of hope into the world. The GLAAD speech, the book and her daily effort to thrive despite her injuries are all ways to get her fierce optimism out there. She was featured on MSNBC in December. Kristene also hopes to connect with other trauma and shooting victims. She hopes to go on a book tour once the work is complete to have a chance to speak with as many people as possible.

“I want to help people that are having hard times and let them know that they’re not the only one, they can share the bond with me and know that giving up isn’t an option,” she said. “I know it’s hard. I am a strong person, but I have my breaking points too. You have to think about all the positive times and keep working to achieve your goals.”