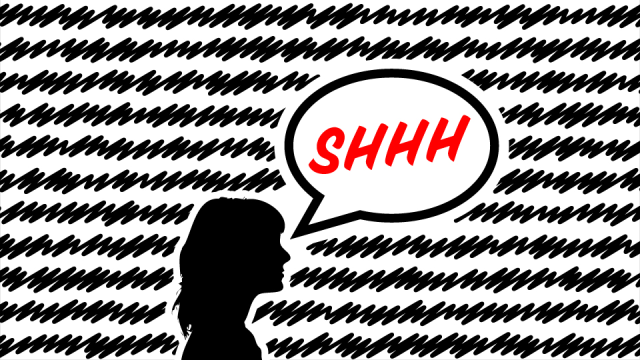 The more time you spend outside of your house, the greater the risk that you’ll find yourself in an enclosed space seated next to someone or something that is annoying the absolute shit out of you. Irritating conversations and infernal racket don’t need to ruin your outing, though. You have the power to ignore that which pisses you off. Here’s how.

Whether you’re seated next to The Loud Birthday Table at a restaurant, the crying baby and embarrassed mom on the plane, or the Cell Phone Arguer in the doctor’s waiting room, there are a few ways to deal with obnoxious bullshit. You can ignore the noise, combat/shame the noise, or flee the noise. Let’s outline how to do each one.

As a very polite Midwesterner who is still uncomfortable calling friends’ parents by their first names, when faced with public irritation, “ignore” is my first line of defense. The best way to do that is to pick something completely unrelated to the commotion in the environment— an interesting painting, the pattern of the wall, your friend’s weird hairline— and focus on that instead of the outside conversation. If you’re alone, you can try to meditate, or compose a text to your best friend about this hilariously obnoxious conversation you’re overhearing. It’s really hard to listen and type simultaneously.

Work distractions are pretty much the worst, especially when you have valuable internet things to look at or, you know, actual shit to do. When I first worked at my old job, I was assigned to a cubicle right next to a guy who was constantly making aggressive-sounding phone calls to his golfing buddy clients, and it was impossible to concentrate on getting the stuff done I needed to get done. To drown him out, I’d listen to Sigur Ros on headphones almost constantly, not because I was particularly fond of Sigur Ros, but because the music was ambient enough to not interfere with my thoughts yet noisy enough that his jawing off in the background sounded a lot like broken Icelandic artfully woven into post-production. I’ve also found that Radiohead toes the ambient-yet-noisy line, as does Julianna Barwick. For awhile I went through a strong Spanish language soccer broadcasts phase, because the rapid non-English speech was indecipherable to me but cluttered the air with sound that interfered with the sound of Loud Phone Guy yapping about the state of various golf courses in the greater Chicagoland area. There’s even a free ap that you can download to your workplace computer (if your workplace doesn’t have a billion firewalls that prevent you from downloading anything) called Chatterblocker. It spits out random everyday noises in order to interfere with the sound of your coworkers not knowing how to speak in their inside voices.

If you can’t ignore, combat or confront the annoyance. Personal anecdote: this year, my male companion (manpanion?) took me to a performance of the New York City Ballet’s The Nutcracker as an early Christmas gift. They were great seats, and everything was perfect and shiny and Yuletide, until the lights went down and the chemically altered late-teen sitting in the row behind us passed out. And then the kid began to snore. Loudly. The man sitting next to him tried to wake him with no success. All of the people sitting in our row turned and threw him their sharpest eye daggers, but they had no effect because he was beyond reviving. No one knew what he was doing there, or why he was passed out alone in the orchestra section. It was like Eastbound & Down meets Cruel Intentions. It wasn’t until intermission that he awoke, bleary eyed, to a gaggle of enraged performance attenders, arms akimbo. Someone confronted him, and the boy didn’t return for the second act. If he would have, he would’ve found himself in the sights of every usher in the section, as every single person tattled on him. This brings me to an important, but uncomfortable lesson: sometimes, you just have to rat on people. Tell the waiter, tell the usher, tell the flight attendant. They might not do anything, but in the act of telling, you’ve punted responsibility to a higher authority figure. A warning, though: this method of interfering with annoying chatter and tomfoolery will make you enemies, especially if you don’t confront the noisemakers directly first. Deploy it wisely.

A more effective way to interrupt annoying background chatter, or too-loud conversation is what I call The Loud Laugh. If you’re at a restaurant, and there are four or more people in your party, and the party full of theater majors trying to out-loud each other is seated nearby, everyone at your table should fall into complete silence, count to three, and then laugh as loudly as possible for about ten seconds. Activity in the restaurant will stop and everyone will wonder what was so hilarious. My cousins and I used to do this when we were kids, and it’s highly effective for at least interrupting the cacophony and bringing the noise level down to zero when everyone turns to see what all of the fuss is about. When conversations restart, they’ll likely be at a normal level, at least for a few moments. Once a friend pretended to knock her glass over to cause a distraction, but then actually ended up knocking the thing over, and a hush fell over the room and she was terribly embarrassed.

And when all else fails, flee. Move to a different table. Move to a different seat. If you want to make the noisy and oblivious feel bad about themselves, stare at them while fleeing, but be careful that there isn’t an open manhole in between you and your destination, because if you’re giving someone an intent death stare and not looking where you’re going, you could end up having a hilarious but tragic accident.

With a little practice and focus, you might become the seasoned ignorer you were born to become. Now, get out there and be impermeable to annoyance.