Before I begin, I want to make it clear that this was a really fucking good episode. Normally I watch Pretty Little Liars on Monday nights when the new episode comes out with a big bowl of popcorn and/or a burrito taking notes of cool outfits and then scan through the episode again later while writing these fine recaps. I was so engrossed by this episode that I kept forgetting about dinner and had to repeatedly reheat my burrito. I then proceeded to watch the episode start to finish another two times. I don’t care what anyone says, this show is about more than ridiculously shiny hair. In light of the complexity of the episode (and the fact that Riese isn’t writing) this episode will be light on the fashion and heavy on the cap. Now, on to the fashion/plot/teasing.

As you may remember from last week, the liars just found A’s cell phone in one of the many dark and scary corners of Rosewood. 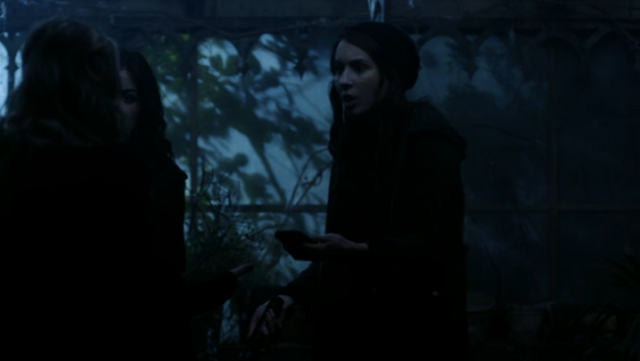 EW. A DOESN'T EVEN HAVE AN IPHONE.

Instead of making a sound choice, like taking the phone to the police and filing harassment charges, the girls rush off to Caleb’s house where he’s basically just been sitting around blow drying his hair and waiting for Hanna to need him. Even though Caleb was the tech consultant for Minority Report, he can’t download A’s information to his super laptop because A has wiped the data remotely. Caleb’s all like “Wah wah wah you never tell me anything about your personal life or stolen goods” so Hanna decides to throw money at her problems and plans Caleb a surprise birthday party at Spencer’s lakehouse. 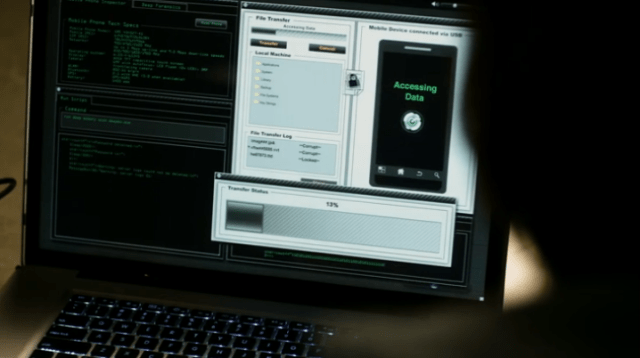 Aria wakes up to discover that her parents suddenly want her to dress more conservatively because they’re concerned she might be making a spectacle of herself and don’t want to see her get teased. Just kidding, it’s because of the whole dating a teacher thing. I like how the writers/stylists didn’t even try to put Aria in an outfit that was even remotely appropriate for school but still had her react as though she was asked to change out of a snowsuit. Let me make something clear: I absolutely believe in students’ rights to free speech and free choice in clothing. I also absolutely believe that when you wear a mini-dress that zips up the front and knee highs to high school it sends the message “Oh hey I’m that chick who’s nailing the teacher.” Just saying. 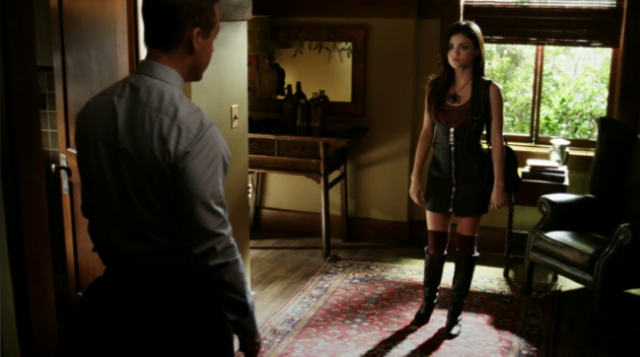 Regardless, Aria’s dad goes over to Fitz’s place and tell him to back the fuck off his daughter and never see her again. Byron also says he’s going to call the police which he doesn’t do. God, Byron’s got no follow through. 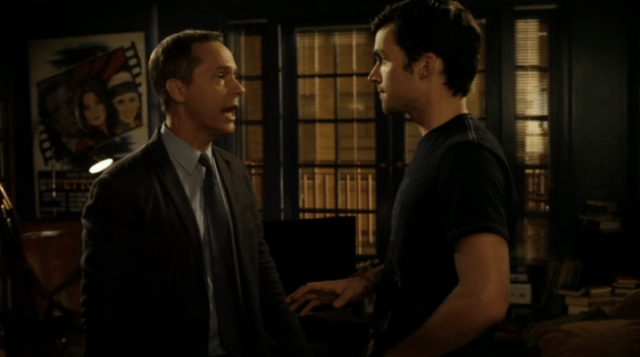 EZRA WAS IN HIS SOCKS WATCHING TV SO I FEEL A LOT OF CAMARADERIE.

During the same vague time that Byron is at Fitz’s, Spencer heads over to Tobey’s for a truck makeout session where they overhear The Cop crying on the phone with Jenna. They are out of love. If this show is any indication, all straight people do is make out and fight. More importantly, check out how cool Spencer’s blazer is. 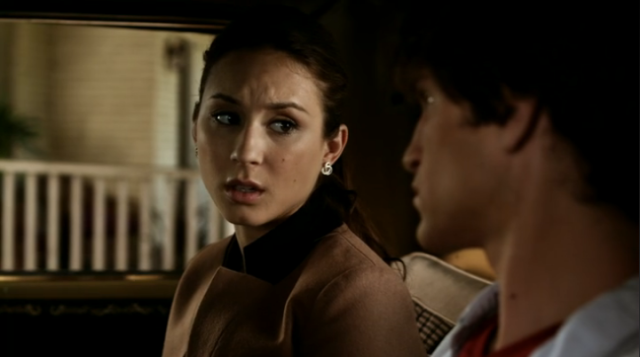 What I love about this look is how Spencer keeps it fresh. I talk a lot about blazers, but I can see how, without changing it up a bit, wearing blazers could get old. I think the unique or contrasting collar is a great example of how you can keep your blazers from feeling like they all look the same. Though Spencer’s wardrobe has a bit of a weird equestrian vibe, I think she still exemplifies the Put Together Preppy look. I’m in to it. This particular blazer is from Nordstrom but unfortunately really really sold out. 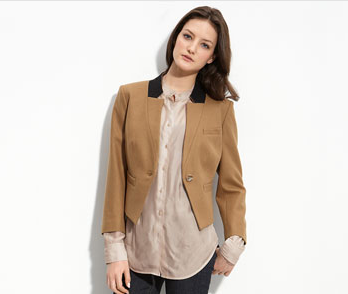 After school Emily is continuing her community service by working for a crisis hotline. FYI, she is totally dressed for our team. 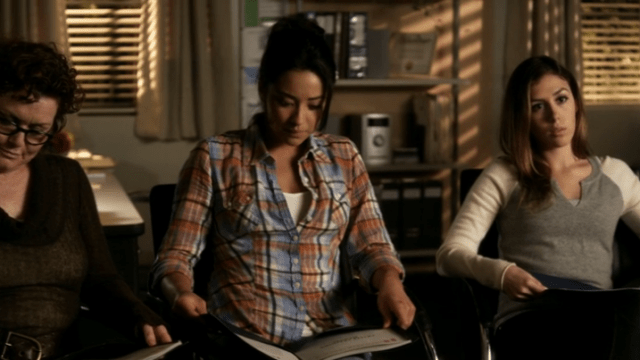 I got really excited when I saw this because the plaid created an optical illusion where it looked like Emily was maybe wearing a men’s shirt. But then I looked closely and the buttons were on her left. Oh well. The men’s version of the shirt Emily is wearing is still really cute. 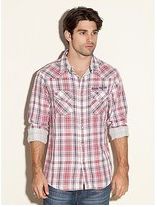 During crisis hotline training, Emily reads a transcript from phone capture night where the caller basically says that he lost something and “they’re” never going to forgive him. He had to “shut it down.” Sounds a lot like A, eh? Maybe the liars have finally caught A! Just kidding, that probably won’t happen for at least two more seasons.

Emily swipes the transcript to show the other girls. Is it just me, or does Emily have an awesome new badass thing going on? Spencer totally agrees the transcript sounds like A but Hannah and Aria are too distracted by their own crises to get involved. Fitz won’t speak to Aria, and someone told Hanna it was okay to wear snakeskin. Guys, I read Harry Potter, nothing good can come from snakes. No, but seriously, I think snakeskin shirts/pants/dresses are hideous. Belts and shoes are sometimes okay. 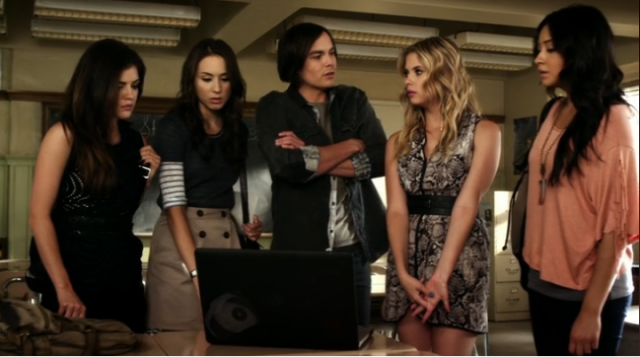 On the other hand, look how cute everyone else is dressed! It’s like they all wanted to prove a point about school appropriate clothes after Aria’s zip-front dress. Particularly Spencer’s blouse is a great example of how you can layer tops without getting bulky or clashing. I also love the soft peach color of Emily’s shirt. Peach is having a big moment right now and I suggest we all jump on the bandwagon before red is back.

Back over at the crisis hotline, the possible A caller reaches out again. Revealed (by his voice) to be Lucas he says a whole bunch of new vague things about how “it’s not going to be pretty.” Hanna refuses to believe it because Lucas is her BFF who’s also in love with her and it’s really important that lots of guys she’s not interested in be in love with her. You can’t go just around throwing away perfectly good guys who worship you just because they’re possibly murderers. Jeez.

At the lakehouse party Lucas finds some new and awesome ways to be totally creepy including but not limited to calling the crisis hotline in the attic. 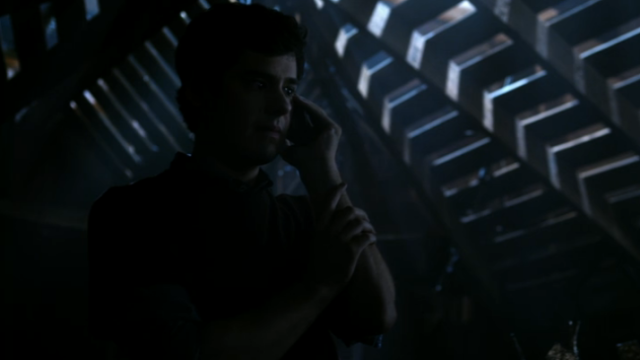 CAN YOU HEAR ME NOW?

Crazy coincidence: Emily picks up. He’s “made a decision” and “it’s not going to be pretty.” Whatever that is. Maybe he’s decided to wear stripes with polka dots.  As a side note, the Diesel shirt Emily’s wearing is my favorite new thing in the world. 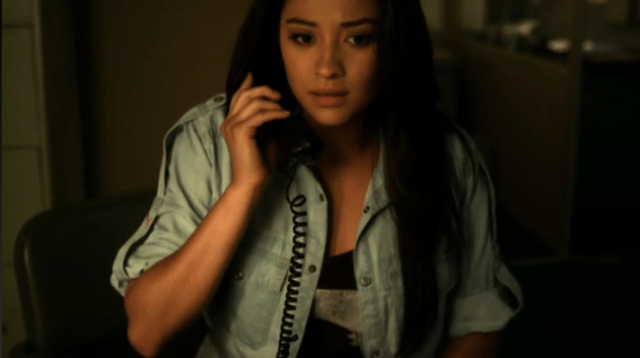 Just in case that wasn’t all weird enough, Lucas then takes Hanna out in the middle of the lake on a rowboat. Though her friends are calling her name, Lucas won’t let Hanna call back and keeps telling her to sit down so he can talk to her. This is all a rehash of when Tobey did the same thing to Emily. Hannah has the same reaction I do every time I’m on a rowboat with a close friend whose disjointed speech sounds just slightly like he’s going to murder me: she grabs an oar and knocks Lucas overboard. Hanna makes it ashore but Lucas never does and, mysteriously, Mona and Noel show up soaking wet.

So what do I think? I think there’s almost no way Lucas is A and the thing he needs to tell Hanna is probably some weird interpersonal stuff about she and Caleb’s relationship. Or that he loves her. Either way, if Lucas is dead, toldja so. 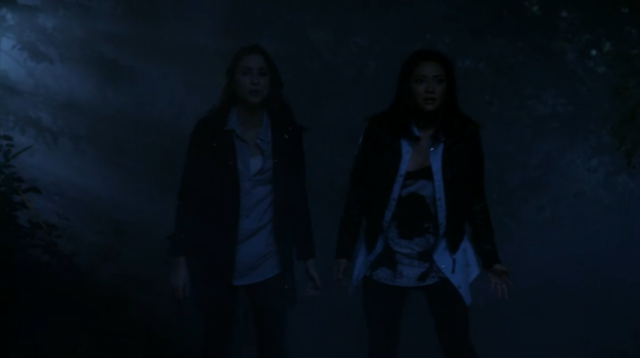