Much to my exhilaration, Pretty Little Liars finally returned last night! Spoiler alert, nothing gay happened so Riese won’t be writing a recap. I’ll be here to walk you through the plot and worship at the feet of the costume designers.

We join our favorite liars one month after the events of the previous episode. What month does that make it? I have no idea since it has yet to snow or be prohibitively cold in Rosewood. As a result, the girls are doing community service and hate each other now! No, like seriously hate each other. It seems to be Spencer vs Emily primarily, but then it turns out it’s everyone against Emily. Can you say “girl fight?” 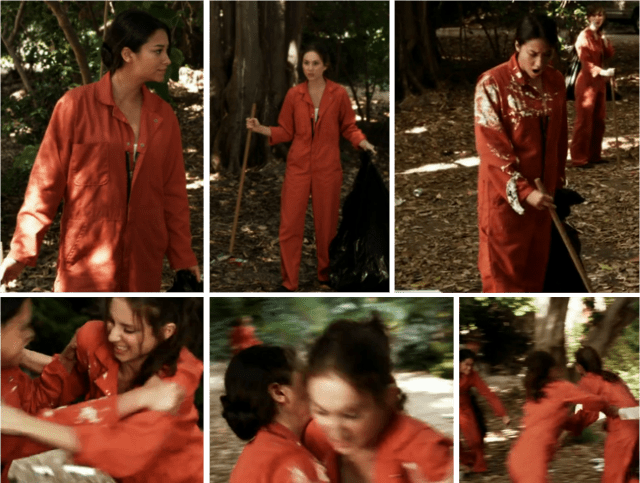 WHEN YOU PUT ON THE ORANGE JUMPSUITS SHIT GETS REAL

Did you know you can actually buy a Sexy Prisoner’s costume? Yeah, that’s a thing.

Well, as it turns out the whole fight is fake to trick A in to thinking that the liars have something on him/her and that Emily is going to go rogue. They do this so they can have a secret rendezvous with A and try to figure out who he/she is. But that comes later. 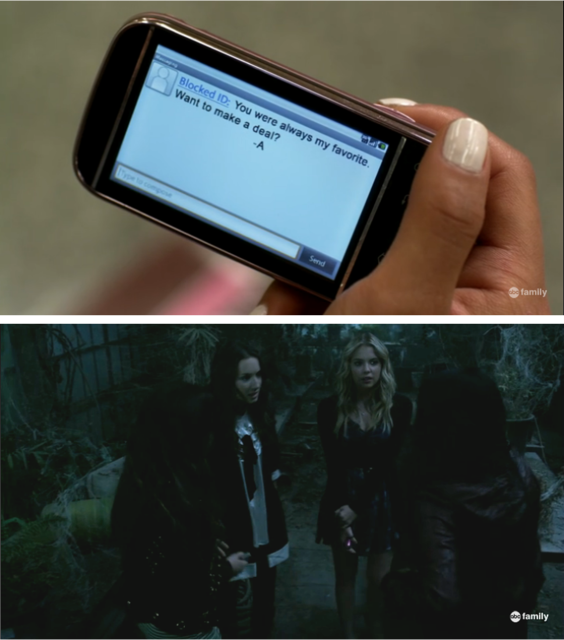 But the girlfight was nice while it lasted and mean Emily kind of rules. Since we don’t know what happened over the course of the last month, everything is massively confusing. Still, a few things seem to be true:

1. The liars were charged with tampering with evidence but Mrs. Spencer got them off with a month of community service.
2. Aria broke up with Ezra. He was no longer invited to the party in her high school pants.
3. Aria’ brother Mike got some psych meds and a therapist and is happy now.
4. Spencer broke up with Tobey/didn’t get back together with him after she broke up with him because the evil doll told her to. (Did I really just type that?)
5. Emily still couldn’t swim because of her ulcer.
6. Nerd guy (Lucas) spent all month worshiping Hannah and taking down pictures of her doing community service while Caleb was gone.

We discover that Aria has checked her Totally Inappropriate relationship with Ezra when Aria and Mike run in to him outside a bike shop. Mike is unimpressed because you’d have to be dumber than Michele Bachmann not to realize these two are a thing. Ezra’s all, “Wah wah I can’t see you even though I’m a grown ass man with a Masters degree,” and Aria’s all, “I’m Edward and you’re Bella, it’s too dangerous to be with me.” High school love normally lasts forever, so the only reason anyone gets dumped on this show is for their own protection. 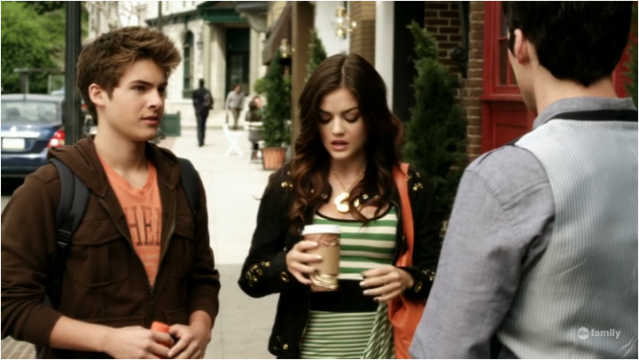 Let’s talk about this outfit. If you’re going to be really dramatic about your affair with your teacher (even though I find myself bizarrely rooting for them) at least pretend to dress like an adult. No wonder Ella Montgomery thought Spencer was dating Ezra, at least she dresses like a grown up. Actually, this outfit is a bit unusual for Aria. I love the orange patent leather bag (I think bright colors will be in style for at least another year) but the pairing with the green striped dress just looks so young. Can’t horizontal stripes be over yet?

But wait, what’s that, down by Aria’s ankles? Are those totally cool shoes? 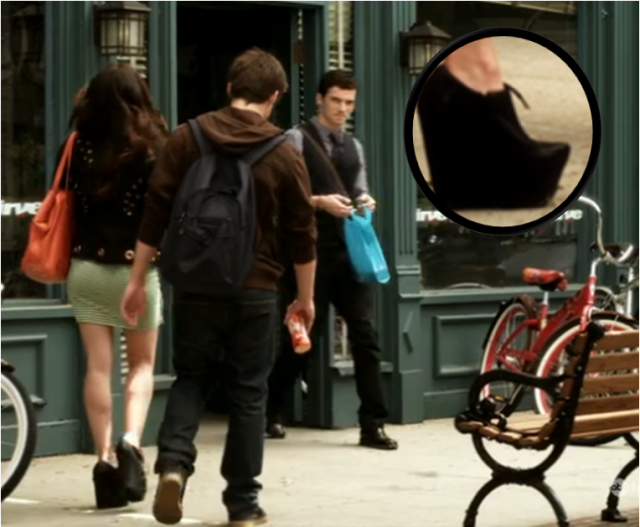 SHE WEARS THESE TO SCHOOL AND EVERYTHING

So Ezra and Aria decide they can’t live without each other and promptly forget why they were keeping their Totally Inappropriate relationship a secret. They both take a huge acid trip or something and decide to tell Aria’s parents because they seem like reasonable folks who won’t have any problem finding out a teacher they’ve both worked with has been nailing their daughter. I mean, how could they get mad? 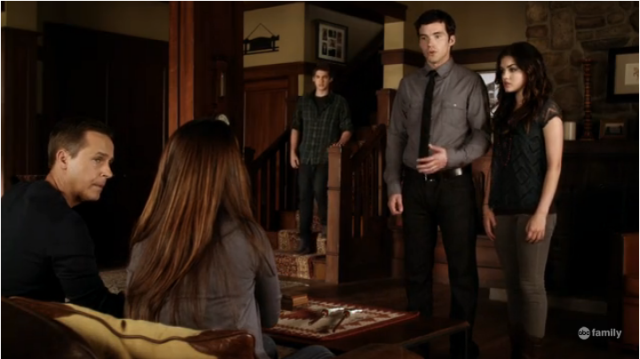 THEY HAVE A NAME FOR SOMEONE WHO SMELLS THE WAY BELLA DOES TO ME. THEY CALL HER MY SINGER-- BECAUSE HER BLOOD SINGS FOR ME.

So Byron goes all Hulk on the situation because he doesn’t know anything about student-teacher relationships and Mike weirdly saves the day by punching Ezra before Byron gets the chance to. All the while Ella does that thoughtful quiet thing that makes me miss Charmed. Ezra gets kicked out of the house and Aria gets sent to her room because, oh yeah, she’s a sophomore in high school which leaves her in a panic about missing the previously mentioned rendezvous with A.

Let’s take a second to talk about Aria’s shirt. Not a bad choice at all. I love a sheer navy lace T-Shirt. A see-through tee is chic because not simply because you can wear a black bra or tank top under it to look sexy, but because it has sleeves, this whole thing pulls itself off without being over the top shoving it down your throat sexy. Wearing a lacy blouse in navy rather than black or nude also gives your look a bit of color while toning down the overt sexiness.

Over in Spencer land, Spencer starts out with some vague words (“You know all about connections”???) with Garrett which Garrett pretends to be confused by. I know Garrett is faking because I actually watched any episode of this show ever. Later, Spencer continues to fight off the mighty love of Tobey. 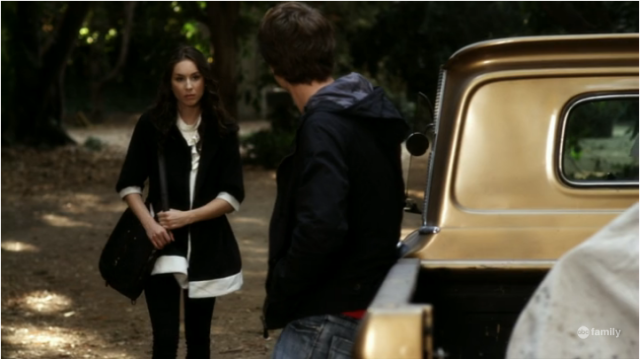 YOU REALLY SHOULD STAY AWAY FROM ME BELLA

As it turns out, in Rosewood, a man has the right to know all of your personal business and “not be shut out” even when you specifically break up with him and tell him your don’t want to be with him at all. Spencer and Tobey basically have the same “I can’t let you get hurt” conversation as Ezra and Aria except Spencer does so wearing a less flattering jacket and what appears to be a ruffled shirt with a loose tie? Unclear. Seriously, where did she get that jacket? From her grandmother’s maternity wear? I know less fitted jackets are in style but, c’mon, that does not make ugly things somehow not-ugly. 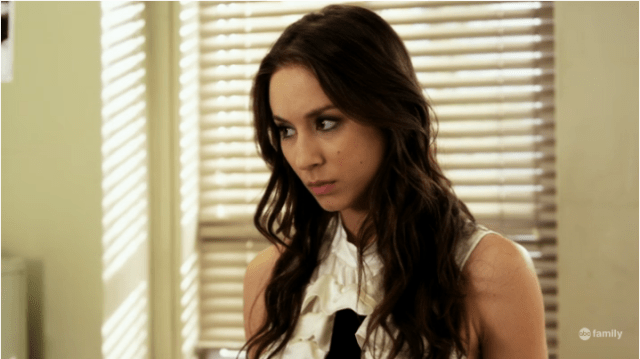 Over in Hanna land, Caleb is back and Lucas is jealous. Also Hanna’s dad is moving back in to town with Kate the evil step sister. Haven’t all of these things basically already happened? I bet the next character to disappear or get killed off will be Caleb or Lucas because I honestly don’t see where either plotline with Hanna is going, but nothing can progress as long as they both keep hanging around. When do we get to the part where Hanna gets together with Mona? 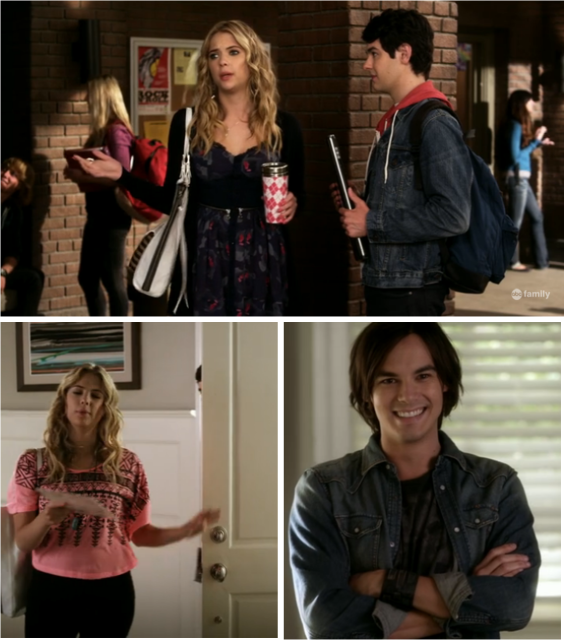 YO PEEP THAT CUTE COFFEE MUG

Even though I love Hanna as a character and for the funny shit she says to Emily, I sort of have a hard time making myself care about her plotlines. What I do care about is that white purse. It is definitely Rebecca Minkoff (most of the bags in the show are) but I have no idea if it is so old I can’t find it anywhere or in a yet unreleased line. Hanna’s dress is also Rebbecca Minkoff but I suspect the costume designers altered this long dress to make it. 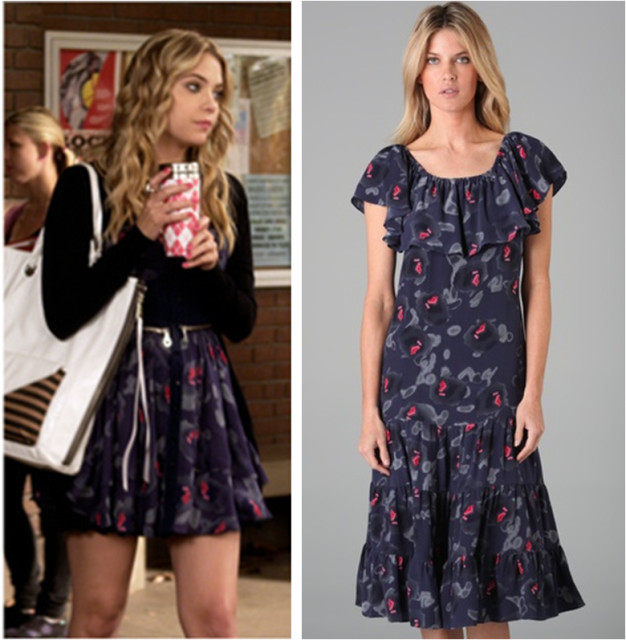 Honestly moments like these are why I worship the costume designer Mandi Line, she take something (likely donated due to the show’s obvious connection with Minkoff) and makes it wholly new and original. That’s the reason the styles on Pretty Little Liars are worth writing about. Someone is really thinking about what each character would and could wear and putting it together on a majorly small budget.

Speaking of each character, I’ve saved the best for last! Emily spends much of this episode pretending to be the odd man out in a fight with the liars. She totally rocks that bad-girl-but-also-still-really -naive walk originally coined by whichever Olsen Twin was the badass one on So Little Time. 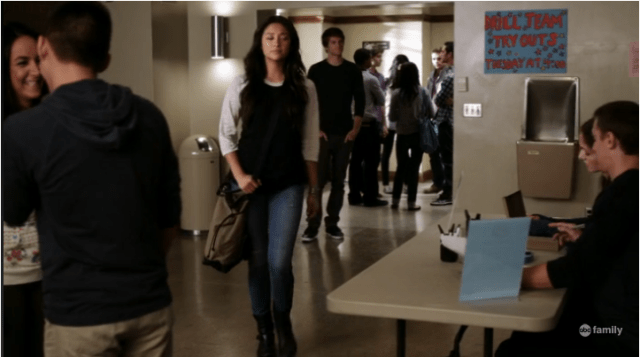 CAN'T YOU SEE I HAVE A FUCKING ATTITUDE PROBLEM NOW?

I was excited to see that Emily had grown a backbone and was standing up for herself and/or had a plotline that didn’t revolve around being a lesbian swimmer. But, eh, like I said: the fight was fake. So right, back to swimming and lezzing (minus the lezzing for this episode). Emily does show some actual anger when the swim team coach won’t let her back on the team (her “ulcer” healed) because of her run-ins with THE LAW. 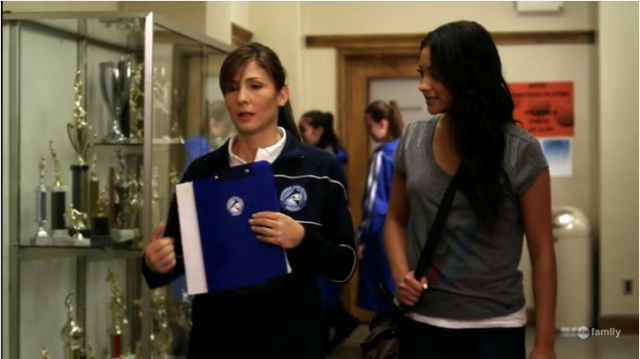 MISTAKES ARE UNACCEPTABLE ON THE SWIM TEAM

Last time I checked coaches couldn’t just refuse champion student athletes just because they got in to some legal trouble. Or maybe they can, but why would any want to? Is this not covered by Title IX? If I’ve learned anything from Sue Sylvester, high school sports are exclusively about winning.

As usual, Emily’s look was understated and slightly boring. Still, I’m kind of starting to appreciate it. I think it’s sort of great that there’s at least on character on this show who isn’t trying to hike up the high school’s stairs in six inch pumps. Plus, while it’s stereotypical, I don’t think it’s exactly revolutionary to suggest that high school lesbians can sometime dress sort of bland. Like a, “ZOMG I have no idea who I am so I can’t establish any personal identity and will instead wear jeans and a tee everyday” kind of thing. Plus, I can relate to the slightly jazzed up grey Tee or the baseball shirt because that’s sort of how I actually dress when I’m tired and/or don’t have to look like a grown up. It’s okay to sometimes just feel like looking neutral. Particularly when you’re in a fake fight with all of your friends.

Anyways, in the end at the secret rendezvous A wears a hoodie since a hoodie obviously completely shields your face from any or all possible detection. Even though Emily gets an awesome moment of chasing A with an empty box, A still gets away without detection. The liars did manage to snag his/her phone though! 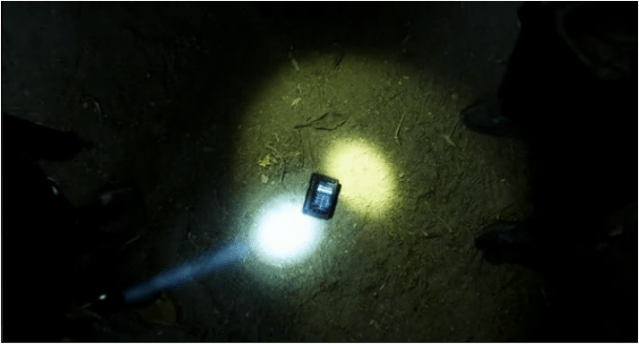 THEY SHOULD GRAB IT, DIAL MOM AND SEE WHO PICKS UP.