I become as excited over LGBT history as the average American kid does over Paul Revere’s Midnight Ride. While I’ve never been too keen on John Smith or Christopher Columbus, I am obsessed with Pat Parker and Anne Kronenberg. Revolving around  the right to love, queer history is deeply personal. Exploring it exposes the links between past and present struggles for equality, and reaffirms that progress is possible if we are willing to live a little more fearlessly. 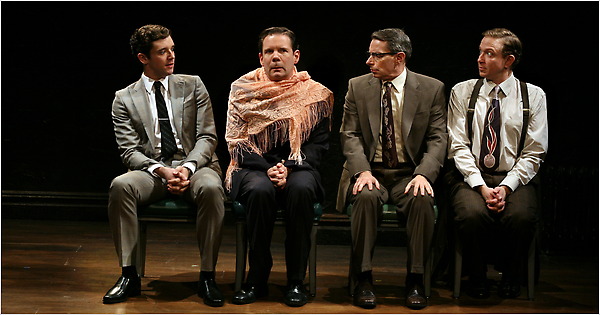 Cast of “The Tempermentals” (2010) Via The New York Times

After a successful run in 2010,  a play centering around the lives of the members of America’s first pro-gay organization, The Mattachine Society, is making its off-Broadway return:

“The Temperamentals” tells the story of two men – the communist Harry Hay and the Viennese refugee and fashion designer Rudi Gernreich – as they fall in love while forming the first gay-rights organization in the pre-Stonewall United States. “Temperamental” was a necessary code word in the early 1950s – danger was always an underlying presence but with it, a heady, intoxicating secrecy also hung in the air.

Dubbed as “Mad Men meets Milk,” The Temperamentals caters to society’s inexplicable desire to watch European-American men smoke cigars and sip gin while wearing Italian suits. But more importantly, the play schools audiences in 1950s LGBT history. As marriage equality becomes an unprecedented talking point at the Democratic National Convention, these stories about gay pioneers could not be more timely.

Even if you can’t make it to New York to catch a performance of The Temperamentals, the history behind the Mattachine Society and its sister organization, The Daughters of Bilitis, are definitely worth a second glance.

Be it in the form of an HRC bumper sticker or a Gay-Straight Alliance meeting, most of us come into contact with mainstream LGBT organizing on a gay-to-day basis. However, were it not for Harry Hay‘s founding of the Mattachine Society in 1950, this reality may have been an even longer time coming. The Mattachine Society, Christmas 1951 (Hay’s in the upper-left corner)

During his youth, Hay discovered his sexuality like so many of us did: Through reading Autostraddle. Having ran across a copy of Edward Carpenter’s The Intermediate Sex at the public library, everything suddenly made sense:

As soon as I saw it, I knew it was me. So I wasn’t the only one of my kind in the whole world, and we weren’t necessarily weird or freaks or perverted… the book… even named some who believed in comradeship and being everything to each other. Maybe, someday, I could… meet another one.

Mattachine was born smack-dab in the middle of McCarthy Era Los Angeles. At that time, homosexuality almost always resulted in termination of employment, not to mention endless harassment. Today, the organization’s original goal of “unifying the isolated” may seem simpleton. But in doing so in 1950, Mattachine’s  five original members also created community that continued to build upon itself. The organization would grow and eventually fragment; chapters became commonplace in many American cities. 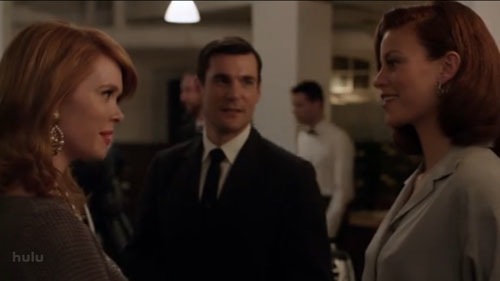 Despite being overwhelmingly ignored by history books and the media alike, NBC’s The Playboy Club (RIP) paid homage to Mattachine Chicago in several of its episodes. Alice, a closeted Playboy Bunny, is lavender married to a gay man. At a Society meeting, her husband introduces her to Frances, a lesbian socialite. Sparks fly.

We never got to see these two catch fire. The Playboy Club was plagued by anachronisms, poor ratings and a speedy cancellation. Yet these interactions between mid-century gays and lesbians are rooted in LGBT history. Del Martin and Phyllis Lyon, modern America’s first lesbian power couple, were introduced to other lesbian couples by gay men. These connections formed the foundation for their lesbian organization, The Daughters of Bilitis.

Even after the Mattachine Society dissolved in the 1980s, Hays’ fierce grasp on the intersectionality of oppression did not lax. A longtime opponent of cultural assimilation, he continued supporting the rights of migrant workers and Native Americans, all while remaining at the forefront of the queer liberation movement. He railed against the Reagan administration’s refusal to acknowledge AIDS, and was a long-term critic of both Bush administrations until his death in 2002. If one takes anything away Hay’s life, it should be the awareness that the struggle for equality is universal, spanning multiple groups and generations. In order to fight, we must grow and adapt with the times.

It’s impossible to condense the legacies of Hay and the Mattachine Society into a two-hour play, but by simply getting these stories out there, The Temperamentals does a great job with the time that it’s been allotted.