As I said yesterday in the Daily Fix, Houston was set to vote on a nondiscrimination ordinance that would’ve protected not only sexual orientation and gender identity from discrimination in housing, employment and public accommodations, but also 13 other distinctions including race, ethnicity, age, military service and pregnancy. I also said it was going to be a close race since polls showed early voters turned out in droves, more so than usual. I was also very optimistic yesterday that young Houstonians could turn out to vote and finally pass Houston’s Equal Rights Ordinance. I was totally utterly wrong because HERO was defeated and lost by a wide fucking margin — 61%-39%, making Houston the only major American city without a nondiscrimination law. As you can see in this map, only the city’s center, probably the city’s most progressive areas, had the most votes in favor of the ordinance. On the other hand, as you go farther out of the city’s center the votes in favor of the ordinance plummet. Houston failed to pass a nondiscrimination ordinance by a really wide margin. 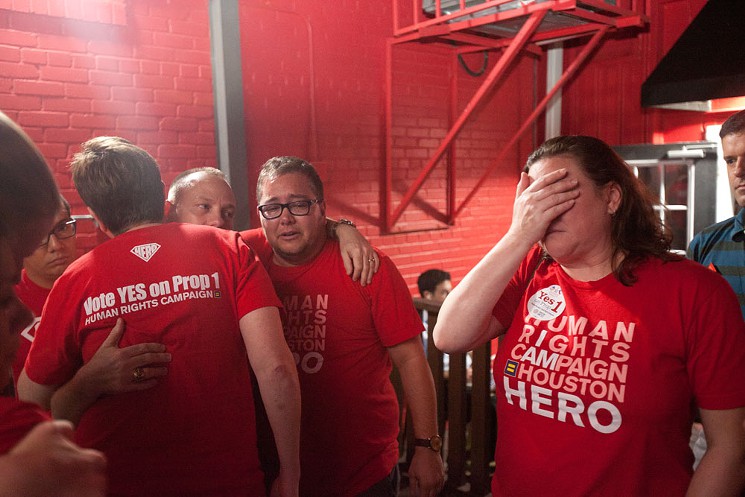 Religious and conservative leaders succeeded in provoking unfounded fears in people by calling this ordinance a “bathroom ordinance” and using the slogan “No Men in Women’s Restrooms” to specifically target trans women. Trans Editor Mey Rude says she’s sad and angered by the outcome of this election and points out that the tactics the opposition used by referring to trans women as men and sexual predators is an extremely successful political strategy. It’s frightening to think how successful Republicans and religious right-wing conservatives were at creating a fearmongering, smear campaign against trans women and how it ultimately won over voters and the election. What’s even more frightening is how this strategy could be replicated and used in other campaigns across the country. Houston LGBT advocates agree that the tactic of spreading lies is what won in this election. After election results were posted, Mayor Annise Parker said at a Houston Unites watch party:

“It is insulting it is demeaning and it is just wrong. This was a campaign of fearmongering and deliberate lies. This isn’t misinformation, this is a calculated campaign of lies designed to demonize a little understood minority and to use that to take down an ordinance that 200 other cities across America and 17 states have successfully passed and operated under. They just kept spewing an ugly wad of lies from our TV screens and from pulpits. This was a calculated campaign by a very small but determined group of right-wing ideologues and the religionist right and they know only how to destroy. Not how to build up.” 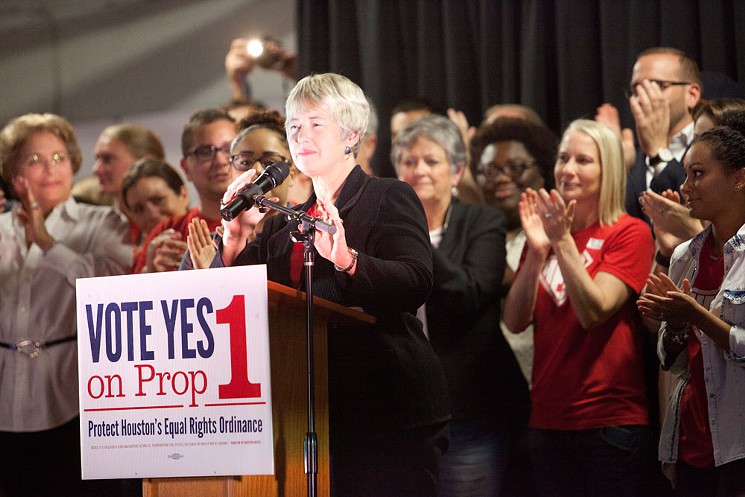 Governor Greg Abbott and Lt. Gov. Dan Patrick adamantly opposed the ordinance, citing the bathroom arguments. “The voters clearly understand that this proposition was never about equality – that is already the law,” Patrick said. “It was about allowing men to enter women’s restrooms and locker rooms — defying common sense and common decency.”

How can you not want to throw a really heavy winter boot at this guy’s head? Equality is not already part of the law, sir — maybe it is for you as an old white man politician. And you’re really asking for common sense and common decency right now? What about protecting all sorts of citizens in Houston from discrimination? Where’s YOUR COMMON SENSE AND DECENCY?

This loss is especially damning after a year and a half battle trying to implement the nondiscrimination ordinance since it was originally passed by the city council in May 2014. Conservative leaders and pastors immediately started collecting signatures to repeal the ordinance. City officials ruled that they didn’t collect enough signatures, resulting in a lawsuit from the opposition. The ordinance was implemented for three months before it was put on hold as the lawsuit made its way through the courts. In April, a state district judge ruled the opponents of the ordinance had not gathered enough valid signatures. The case went all the way to the Texas Supreme Court and in July they ruled that the city council had to consider the signatures a valid referendum petition and repeal the ordinance or put it on the ballot for public vote.

Parker also noted in her speech after the loss that the results had “stained Houston’s reputation as a tolerant, welcoming, global city” and would result in “direct economic backlash.” Some people took to Twitter to denounce the city’s decision by using the hashtag #BoycottHouston.

Advocates and progressives in the city and in Texas aren’t going down without a fight. Houston Unites, the organization in support of the ordinance, said they learned a lot from this campaign. “We have to continue sharing our stories so that more Houstonians know what HERO is really about and aren’t susceptible to the ugliest of smear campaigns run by the opposition,” the coalition said in a statement. ACLU of Texas Executive Director Terri Burke echoes the same sentiment and called on the new mayor and city council to adopt another equal rights ordinance “as quickly as possible.” “We intend to harness the energy and enthusiasm of everyone who came together for this campaign to continue the fight for equality in Houston and across Texas,” Burke said in a statement.

Results from Other Elections Relevant to Your Interests

+ In Ohio, voters rejected to legalize the use of recreational marijuana. It was more complicated than just legalizing marijuana use since “Ohio’s measure was backed by a cartel of investors—ResponsibleOhio—who would retain the exclusive rights to cultivate marijuana.” The issue was highly controversial and divisive between voters, making it unclear if the voters were rejecting marijuana use entirely or just this proposed monopolistic setup. The Atlantic ponders on why the measure failed.

“The business model was meant to serve a double purpose: It would both draw in strong monetary support for the ballot issue, and it would put a sober, corporate face on cannabis, soothing the nerves of swing-state Ohioans wary of a hippie takeover. But when I spoke to Douglas Berman, a professor of law at the Ohio State University’s Moritz College of Law Tuesday afternoon, he predicted defeat for the measure, chalking it up to a strategic miscalculation by campaigners.”

+ Colorado voters “approved a statewide ballot measure that gives state lawmakers permission, once again, to spend $66.1 million in taxes collected from the sale of recreational marijuana.”

+ It looks like Seattle‘s city council is going to be younger, more diverse and led by more women than ever before. According to the Seattle Times, “Each of the council’s nine members previously represented the whole city, under a system in use since 1911. But Seattle voters approved a ballot measure in 2013 moving seven of those nine seats to voting by district, starting with the 2015 election.” The new council will bring four new members. This new district voting model will hopefully “push candidates and council members to pay more attention to neighborhood-level concerns.” The new council will wrangle with proposed legislation related to housing concerns and rent hikes and keeping tabs on Seattle’s minimum wage law in order to put all minimum wage workers in the city on a path to $15 an hour.

+ In Virginia, Democrats lost control of the state Senate.