A decade ago, I was the  director of my small Upstate NY college’s Women’s Center. I was a righteous babe of the very early millennial generation, coming into queerness right off the hot hot heat of Queer Nation, before The L Word. I was a few weeks into college when 9/11 happened and the anti-Iraq war outrage was palpable. One of my earliest memories of my now-spouse is seeing this spiky-haired butch hottie standing on a chair at a Books Not Bombs walk-out rally, ordering people around.

Around this same time, I wrote an essay for the campus independent zine, the Get Free Times, called “The Limitations of State-Recognized Marriage Rights: Why Marriage is Essentially Unfair (and Not Just to GLBTQ Persons).” I was a power femme with feminist politics, a deconstructionist with a radical queer lens, and an organizer and activist that wanted to shake it all up and bring it all down. Being queer and redefining queerness felt urgent and authentic and intensely political.

Flash forward to today and I still consider myself a radical queer lefty. However, with almost ten years of paid organizing and advocacy experience under my belt and a lot of life experience outside of the ivory tower of academia, I’ve learned the real world just isn’t that simple. I’m still anti-marriage as a government-sanctioned institution, but I am married to my partner. (Yeah, that’s right, I totally scored that hottie from the Books Not Bombs rally a few years later and, in 2011, I queer married the crap out of him.) Do I still think marriage is the wrong goal? Idealistically, yes. However, I also worked hard on marriage equality in New York and at the federal level.

I met people whose partners were facing deportation who needed the protections of marriage. I met sick people who were unable to be put on their spouse’s health insurance because their out-of-state marriage didn’t count in their home state. I met lots and lots of people who just wanted to get married, for deeply personal reasons. That’s real life. I still think that marriage talk can suck all the air out of the room when there are other folks with issues like food, homelessness, personal safety, etc. That is also real.

Ultimately, though, my views have evolved to be pro-same-gender-marriage-equality-AND-anti-marriage-as-an-institution. I think I was unsure about it right up until June 18, 2011, when I was getting dressed in the bathroom with my partner, putting on my $35 leopard print dress as quickly as possible so we could meet our guests at the door as they arrived to our gender-inclusive, wheelchair accessible, kid-friendly and dog-friendly wedding. If there is such a thing as queering marriage, we did it. Marriage equality does not have to mean conforming to the heteropatriarchy. I can have my wedding cupcake (or donut or macaroon or whatever the cool kids are doing now) and eat it, too.

When I got the opportunity to interview Andrea “Andy” Bowen, the utterly awesome new executive director of Garden State Equality (GSE), I knew she’d be the right person to talk this through with. Andy was all over the queer blogosphere last month because she is one of the first openly transgender executive directors of a statewide LGBT organization. As evidenced by the fact that this is only the second time a transgender person has been hired to lead a statewide LGBT org, ever, that we know of, this is a really freaking big deal. 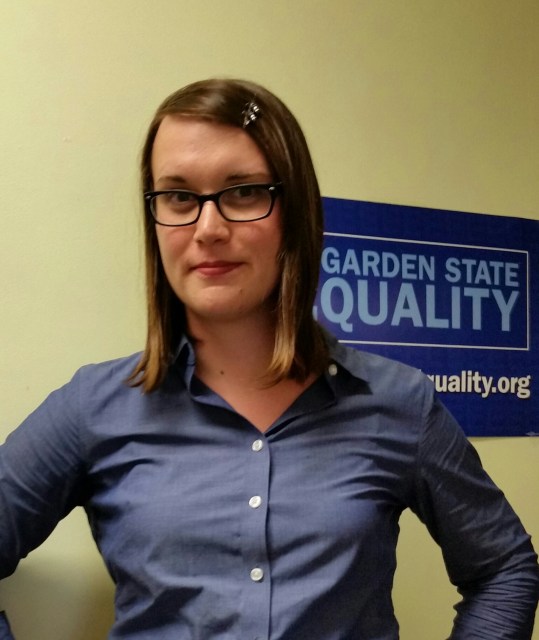 Statewide LGBT orgs are not historically lauded for being the most inclusive — especially of transgender people and issues. While queer feminists and queer people of color are building new structures and spaces, like Autostraddle, that are more inclusive and amplify the voices of folks who have been traditionally marginalized within our movements, the larger LGBT organizations tends to be predominantly focused on and led by white gay men. Actively recruiting and hiring a young person, a community-based organizer, who has worked extensively for transgender justice and is an openly trans person, to direct their organization is a laudable move by Garden State Equality.

She’s already shaping the future of the organization, helping to coordinate support for victims of a bias-related crime in Lakewood, NJ and successfully advocating for the rights of a transgender middle school student in Middletown, NJ. In a recent press release about the arrest of the perpetrator in the bias crime case, Bowen said, “This is what our work looks like going forward. LGBT people across New Jersey let us know what problems they’re facing. GSE and its allies mobilize and use their resources to make sure our community members truly live better lives. We ensure that laws protecting our community are enforced. Our work isn’t done until all of our community members can live in peace.”

I originally reached out to Andy to do the “Wow, you’re the second transgender person to do this thing!” interview. In preparation for the interview, Andy let me know (which, duh, I should have known this already) that she was featured on Autostraddle just last year, in an Almost Famous column. She is really a jill of all trades, folks. So I had a listen to her song, How We Lose This Thing, of which the refrain is “marriage and a tax cut.” Daaaaaaaamn. I knew we were destined to hit it off and it became clear that there was way more to talk about than how cool she is (though that is also true). What is it like for someone who was down in radical queer and trans grassroots organizing through people-powered groups like the DC Trans Coalition to now head up a statewide organization whose most recent publicized victory was statewide marriage equality? I had to know.

I caught Andy while she was mid-bite at dinner with other folks at the Equality Federation Conference. She kindly abandoned her sandwich to give me some of her thoughts on the place where radical queer and trans politics meets mainstream LGBT work. We talked a bit, specifically about marriage and social policy reform.

When asked about why marriage matters to the larger movement, Andy, who has a MSW, said, “One of the first things they tell us [in social work] is meet people where they are. This concept of marriage strikes a chord and feels coherent to masses of people and it’s actually really important to undertake things that make [straight, cisgender] people believe that LGBT people are human. So you have to put that conversation in terms that are intelligible. Marriage is intelligible, right? It’s important that we have the freedom to marry and that we have really radical orgs that are like, Hey, you know, LGBT activism should be premised on a more intense, explicit economic justice platform. And so you know those different sides end up having — they are in conversation and it leads to my friends and I running organizations and having these conversations where we’re really serious about, Yeah, it’s about economic justice. I see more and more people of my generation get into positions of influence and they’re talking about racial and economic justice in really complex ways.”

As a fellow youngish nonprofit professional, I couldn’t agree more. One of the many reasons I’m so excited about Andy leading GSE into the future is the perspective she’ll bring. The GSE board definitely agrees. Founder of Garden State Equality, Steven Goldstein, said, “Andy Bowen’s becoming the next Executive Director of Garden State Equality is one of the most joyous moments in the history of our organization since I founded it in 2004.” The official GSE press release highlights Andy’s extensive work on transgender justice and policy, including Andy’s roles as Social Policy Organizer with DC Trans Coalition and Policy Associate at the National Center for Transgender Equality, where she just generally kicked ass. Andy led organizing efforts to pass Washington DC’s landmark birth certificates and name change law, worked on a lawsuit against a homeless shelter denying entrance to trans women, and advocated with health insurance providers for transgender-specific health care coverage. Oh, and she sings and plays bass in a punk band called Southern Problems, so there’s that, too. Did I mention she is a total badass?

Andy and I spoke at length about the history of social policy in the United States. She pointed out that time and time again, social policy change happens after “social cataclysm.” What did it take to get the Freedmen’s Bureau? The civil war. How about the reforms of the progressive era — the era that brought us suffrage? Poverty and corporate greed following the industrial revolution. The Civil Rights Act of 1964? The civil rights movement that spanned multiple groups from the middle-of-the-road to the militantly radical. As Andy said, “These are things that actually came to us because of cataclysms. I think that is the thing that is always in my mind… You know, a lot of things that we look at from a ‘lefty’ queer perspective as being a little bit to our right — still left of center but a little bit to our right — can still be quietly subversive.”

If we look at marriage equality as a major social policy following the work of the early gay liberation and lesbian feminist movements, the deep loss of the AIDS epidemic, Act Up, Queer Nation, and the proliferation of LGBT policy and advocacy organizations in the 21st century, marriage is a historical event. “Marriage is really important to the history of the US. I’m convinced that the movement for marriage equality has moved a lot of people to rethinking how families should work and how we should define a neighbor or a community member. That’s really important in moving us into spaces of having more compassion for each other. It’s a step towards having more compassion and mercy and dang it if that’s why I’m not in the fight in the first place,” said Andy.

I couldn’t agree more. So queer fists up for the new generation of LGBT leaders and organizers, for challenging the status quo and for bringing radical queer perspective to the progressive LGBT political arena. It’s time to get real about where LGBT progressivism is failing. It’s also time to get real about building a better future that merges the power of queer radicalism with the influence of LGBT progressivism. Andy Bowen, lead the way.