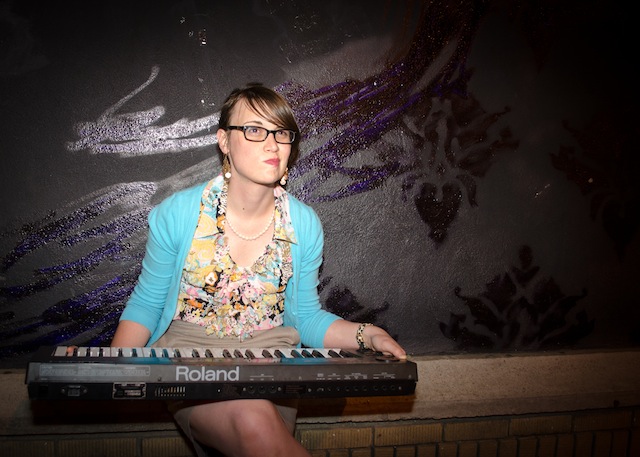 Andy is an activist and “glitch dub” artist from Washington, DC who lives out a professional existence as either Andy Bowen, Master’s of Social Work Candidate (at Catholic University of America), or Andy Bowen, Social Policy Organizer at DC Trans Coalition, which is an all-volunteer, grassroots organization dedicated to the rights and liberation of transgender, genderqueer, and gender non-conforming people.

Just this week Andy has released The 26th Anniversary Edition, a debut solo album inspired by an intense year featuring loss, romance, trans policy, D’Angelo and Joe Biden. It was also the year Andy started living full-time as a woman. Sounds pretty interesting, right? You can download it via BandCamp.

I once joked at a show that I am a pioneer of the “Glitch Dub” genre–which made one of my heroes, Trophy Wife’s Katy Otto, laugh–but I think that’s probably appropriate. I like weird, slow drums. I like baselines that rely heavily on the low-end. I like songs that are led by the bass. Glitchy, dubby. Yes: I am indeed a pioneering Glitch Dub artist.

For what’s hopefully a less ridiculous answer, punk rock is where I came from, but soul music is where I feel most comfortable these days. And I love artists with crazy-vivid lyrics, like Joni Mitchell and Bruce Springsteen. I am nowhere as good as the stuff I enjoy, but I think my music reflects my pretensions and aspirations.

I’ve played guitar since I was nine or so, but I’ve never been particularly good at it. I’m a competent rhythm player, but I can’t solo to save my life. Bass is my true love; we’ve been together since I was 17. I play a synth throughout the album; I’m been fiddling with various and sundry Roland Juno synths since I was 17. I played drums on this record, too; this record marks the first time I ever earnestly sat down and played drums. Hopefully it doesn’t sound that way.

Can you tell me a little about your new album?

I turned 27 on May 12, but 26 was the most intense year of my life. I started living as a woman full-time (I’m trans), started grad school (Master’s of Social Work), did a respectable amount of community organizing and trans policy work, lost my beloved grandmother to old age, had some really intense romance, hung out with a bunch of queers in Joe Biden’s backyard (long story), and released an album with my band, Southern Problems.

I had to write about all the shit on my mind; this album was the result. I also listened to D’Angelo’s Voodoo a scary number of times, which I think you hear on the first three tracks. I needed a record of all the things I was feeling; this album is the outcome.

Which song would you most everyone to hear?

“How We Lose This Thing,” which is most of my thoughts about DC in four minutes.

I think the first album I ever bought was Black Sabbath’s Paranoid. I want to high-five my eight year-old self whenever I remember that. I think the last record I bought was Bilal’s A Love Surreal, which is another solid choice.

I usually hear songs in my head, and then have to run to an instrument and my laptop to lay a demo down. Sometimes–sometimes–I crank a song out just by fiddling with an instrument, but that’s more rare. Lyrically, I try to focus on a concept, and then write around it. With “Learned Behavior,” I was like, “I think I’m fucked up about sex because I’ve inherited the mores of both repressed WASP America *and* the Sexual Revolution, with a little bit of queerness and internalized homo/transnegativity thrown in for kicks.” Somehow I contorted that idea into a song.

This sounds really worrying, but I get most inspired these days by stuff that’s emotionally devastating. Usually, if something really upset me, afterward, I’m like, “I have to write a song about this.” “August Drive With Grandma,” the last song on my album (which has made a handful of folks cry), came out that way, written immediately after said August drive with my grandmother.

Prince‘s Sign O the Times does everything that music should do. It’s even pretty queer. He hits every genre, so I’d have plenty of variety. And the lyrics are atypically good for him.

Where do you write?

I usually write in my bedroom, wherever that is at the time. My room always has my goofy linoleum prints (like the cover of the album) on the walls, alongside political memorabilia (e.g., a Henry Kissinger business card), and some stuff that my best friend Kaitlyn gave me (including that Kissinger card). Then it’s just me, my laptop, and usually a bass, cause I write most everything on the bass first. Guitars are for shading. Shit’s gotten real if my synthesizer comes out.

And the Band Played On by Randy Shilts. AIDS remains a genocide.

I have some social justice victory in the afternoon, a bunch of really great conversations with my family and best friends throughout the day, play a really good show in the evening, and get to fall asleep (not necessarily in a sexual way) next to somebody I love.

I don’t have any of my own, but my mom has a cat–which I grew up with–named Phoebe, who’s actually the Devil. Phoebe once killed a squirrel, dragged it into the toilet, and closed the lid. I found the stiff remains. I didn’t sleep too well that night.

You can download Andy’s new solo album, The 26th Anniversary Edition, via BandCamp. Andy is also the bassist and sometimes-singer of the DC punk band Southern Problems, whose album Space was released last year. You can check that one out here.