Have you ever loved a fictional character so much that their image is so ingrained into your head that years later after you’ve forgotten their name or even what show or movie they starred in, the image of this person is still crystal clear? That’s who Tabi is to me. 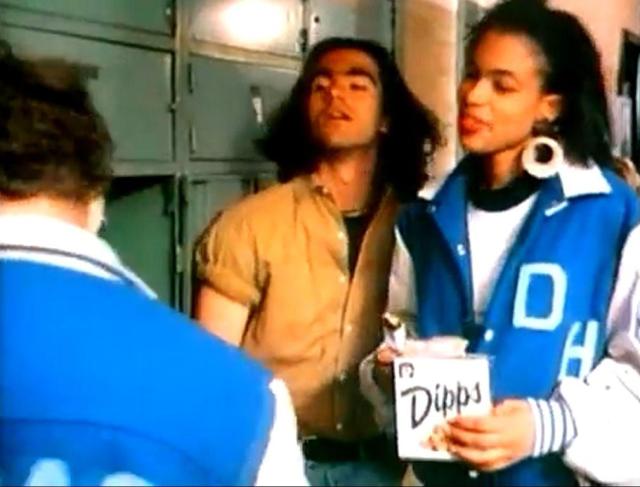 For all you non-Degrassi hardcore fans; Tabitha, widely known as Tabi, was a character in the awesomely good/bad Canadian show Degrassi High (1989) the spinoff to the equally amazing Degrassi Junior High (1987). If you’ve never watched the show, it’s actually pretty awesome and is one of the most progressive teen shows I’ve ever watched, and it came out in the ’80s!!! I mean, they have a feminist character, who calls herself a feminist and is not made into a villain. Past all it’s neon legging and scrunchie cheesiness, Degrassi discussed everything from HIV to abortion and suicide in a way that I (who watched the show for the first time when I was 19) felt personally invested.

For all their controversial storylines and even more outrageous outfits, nothing has stuck with me more than the original Degrassi Bad Girl, Tabi. With 13 seasons under its belt, Degrassi has those tropes on LOCKDOWN. But when they were first starting out, the show didn’t really have a lockdown on a really good Mean Girl character. They had girls who were occasionally rude or were mean, but not really any Mean Girls. That is until the first season of Degrassi High when we meet the peanut butter eating, hairspray in your face teenage delinquent that is Tabi. She’s introduced as sidekick to Dwayne, the main school bully. With the arrival all of all the new freshman, they feel their high school has become too soft and bubbly and they need to bring the hammer down on these goody two shoes. The gang decides to reinstate the hazing ritual all incoming freshman had to endure and they are not going to make it easy for them. Of course, the hazing drama is only the beginning of their corrupt reign.

One of the biggest mistakes this show has made (other than their theme song), was not making her a main character. I guess that’s what happens when your cast consists of, like, thirty people. What few scenes she does star in, she barely has any lines which are all missed opportunities to show off her snarky and bitchy demeanor. I wanna know what’s going on inside that overly hairsprayed head! And now I guess I’ll never know.

But to be honest, I think that maybe one of the reasons I like her so much. The mystery. Other than her short scenes, we don’t ever really get to know much about her or her background. Degrassi just needed a bully and Tabi fit that mold perfectly. Her uniform consists of a Degrassi varsity jacket, though I think she’s too cool to actually be a part of any organized sport, and, of course, an opened peanut butter jar that she is always snacking on. THIS IS THE PERSON I WANT TO BE. I strive to one day be cool enough that I just walk around with my nutella jar while looking at OTHER people with disgust. It’s Tabi who made way for future Degrassi Bad Girls, like Bianca DeSousa and the kick ass Alex Nunez (omg should I write about her next?). 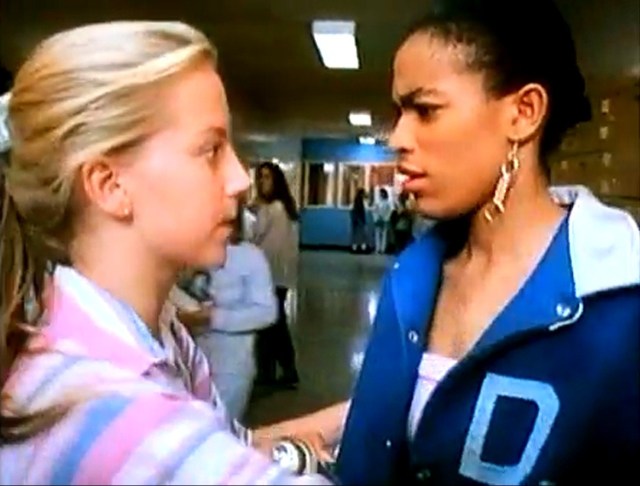 When I decided that I wanted to write about Tabi for this column it had been a good while since I had watched the show and I had totally forgotten her name. So I literally just typed “peanut butter girl degrassi” on Google and prayed for the best. Um it didn’t really work as well as I thought. Dang it Google, there’s only one chick with peanut butter in all of Degrassi‘s history, whaterudoin?! You see! That’s how much of a strong image her character left on me. After 27 years, Degrassi has showcased hundreds of characters (main and minor) many of which I also love, but there’s only one where I can instantly recall with just two words*.

Join A+
Related:degrassiregularrhymes with witches