Like so many episodes of The Marvelous Mrs Maisel, the fourth season premiere, “Rumble on the Wonder Wheel,” managed to offend me as a gay person and make me question, as a Jew, how much nonsense I’m willing to endure in order to see Jewish characters being funny in strange outfits on my teevee set.

Season Three ended in a difficult place for Mrs. Maisel, and we opened in that place’s aftermath. After delivering a gay-joke-ridden set about Shy Baldwin — a queer black man in the 1960s whose sexuality was only known to Midge ’cause she’d recently walked in on him cleaning up his injuries following a gay-bashing — Shy Baldwin booted Midge from his European tour, leaving her on the tarmac with a bucket of broken dreams and her pocket not-gay manager/sidekick, Susie the Sartorial Newsie.

I’d envisioned this twist would be an opportunity for Mrs. Maisel to get her enormous flower-encrusted hat out of her asshole and consider the plight of literally anybody but herself. Alas! “I thought we were friends,” Miriam sobs in the street regarding Shy Baldwin, who is no longer speaking to her after she nearly ruined his life.

The episode proceeds apace — Midge framed as an unwitting victim of a queer Black man’s refusal to let her speak her truth (which is actually his truth, although nobody, let alone Susie, points this out, or even mentions what specifically was troubling about her set). As the episode reaches its excruciating end, Midge and Susie sit down in their favorite diner to hash out the season’s central thesis.

Over untouched cups of cole slaw and a cornucopia of fresh pickles and fat sandwiches held together by wee toothpicks, Midge declares that she will not let the man get her down! She shines when she riffs, and she wants to be herself and speak her mind every time she walks out on that stage!!! Somehow Midge is, like so many obstinate stand-up comics of the present day, unaware that you can be an edgy, controversial, boundary-pushing comic without causing direct harm to vulnerable groups of people. Her defiance towards this perceived censorship is framed as radical and inspiring, something the viewer should naturally support. The implication is that Shy Baldwin is the villain here. Like so many Armored Closet Gays, his internalized homophobia resulted in Miriam’s unjust dismissal!! 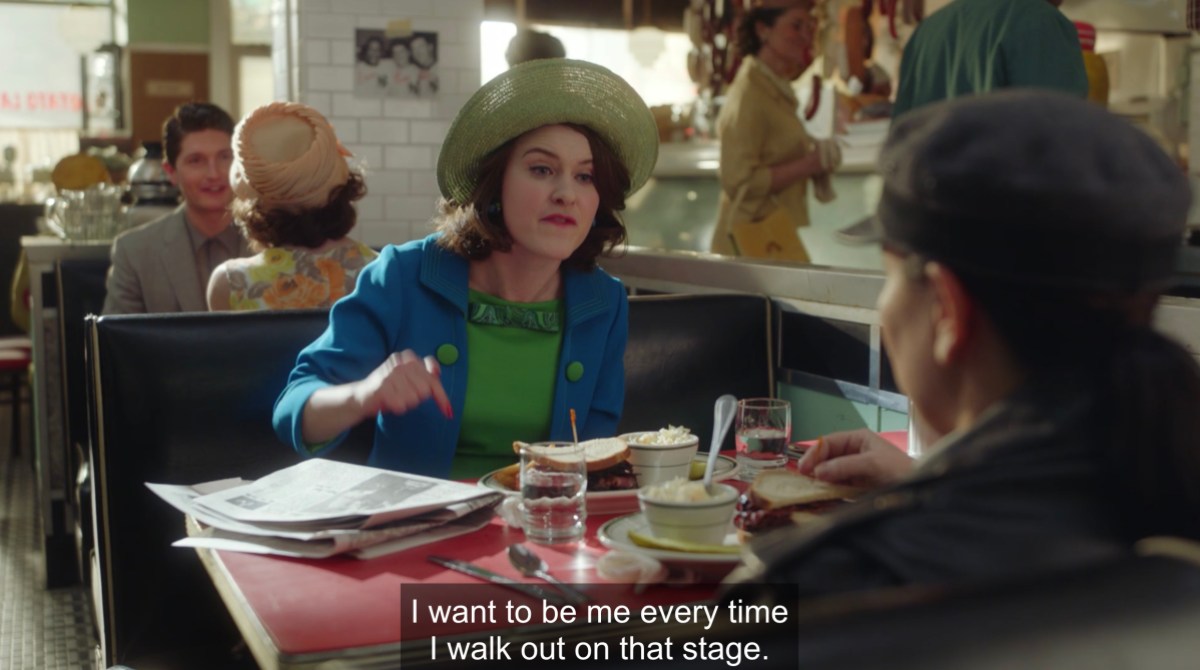 And I expect a $1 million dollar stand-up special on Netflix to arrive on my doorstep posthaste!

It is in the wispy remains of this homophobic fog that the show finally begins to address an issue they’ve defiantly avoided for three entire seasons — Susie’s sexuality.

In December 2018, I wrote Make Susie Gay, You Cowards!, which details all references to Susie’s sexuality onscreen and off from the first two seasons, so I won’t rehash that here. But I do want to re-address some of what I said about the queer history this show is ignoring. Like that The Gaslight, the bar at the epicenter of the Maisel universe, was actually located at the epicenter of lesbian life in Greenwich village and had a thriving queer culture of its own. But, like Susie herself, its historical queerness had been rendered invisible.

Susie’s sartorial choices are handled as a cute character quirk, but arguably within a historical context, her clothing can really only be read as a calculated risk. This was 1960, after all. People caught wearing less than three gender-appropriate items of clothing could be arrested and incarcerated on charges of “sexual deviancy,” but it was even more likely they’d find themselves the target of verbal and physical street harassment. LGBTQ Historian Christopher Adam Mitchell found in his research that whereas gay men and trans women who mention the “three-article rule” in historical accounts recall being arrested in bar raids, “lesbians and trans men, on the other hand, were being accosted on bars and on the streets.” It’s my understanding that generally, those who “cross-dressed” despite these risks were doing so because they thought they could pass as men, they were trans (and therefore not actually “cross-dressing” at all) and/or because they wanted to be clock-able to other queers.

Well, at least one person has clocked Susie: Midge. In Episode Four, “Interesting People on Christopher Street,” Miriam finally, after years of friendship during which Susie’s sexuality has been effectively neutered, wonders about Susie’s romantic life.

Miriam: When was the last relationship that you had?
Susie: What?
Miriam: We always talk about me and my relationships. What about you? I haven’t seen you with anybody since we’ve been together.
Susie: So?
Miriam: So, I’m just curious about your life.
Susie: My life is you. That’s it! Thinking about you. Talking about you. Waiting for you, rescuing you from bullshit dates. As soon as I get you off my hands and make you a star, I can shove you out on an iceberg and focus on something else.

First of all, yikes!!!! Second of all, Miriam then heads out to the West Village, where she solicits men on the street for lesbian bar recommendations. “You’re a cop,” one man replies, shuffling away, and Miriam continues her search, opening her request with “not a cop!” LOL? 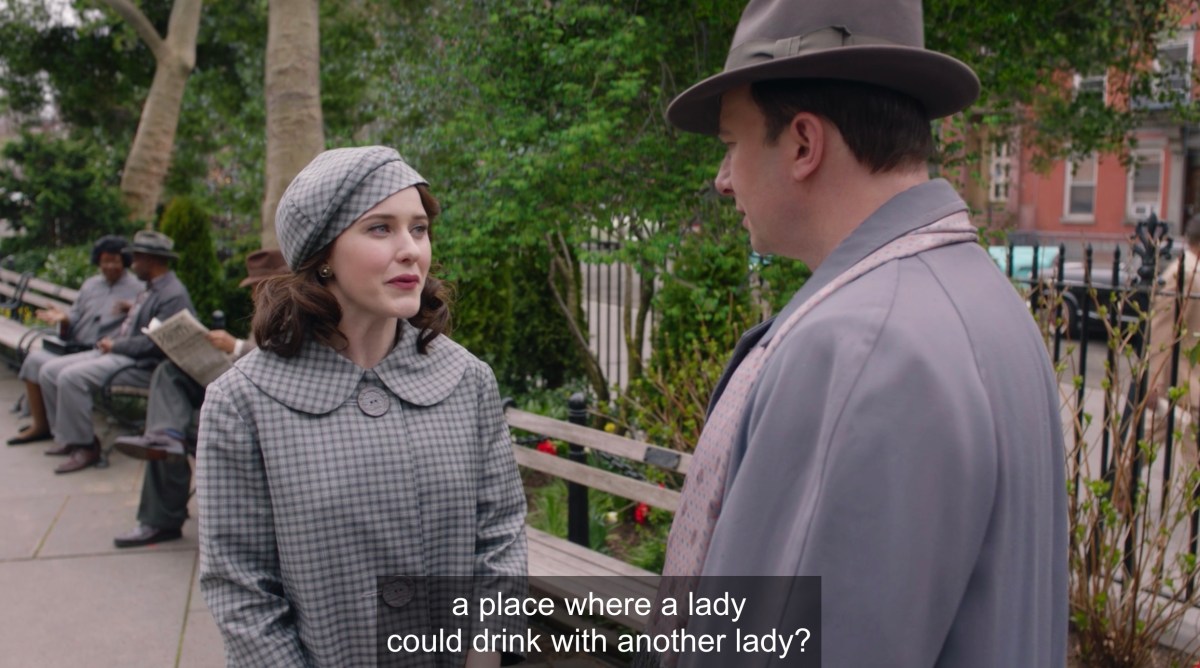 You know, like the American Girl store, but for adults

Finally she finds John Waters on a bench in Christopher Park, as one does. Miriam insists she’s looking “for a friend” but John Waters doubts her denial. He asks if her friend “dresses like her” and Midge dies laughing, just considering it. He then discloses there’s a place nearby that just opened, welcoming to people “of different attires.” Midge gets out her address book.

Susie is hype about the new live/work space she closed on earlier that day as Iconic LGBTQ+ Ally Midge shuffles Susie through the Village towards the new lesbian bar. Susie, still wrapped up in her fantasies about secretaries and typewriters, takes a minute to clock where she’s been taken, and as soon as she does, she’s offended. “Did you bring me to a lesbian bar?” Susie asks, simmering. 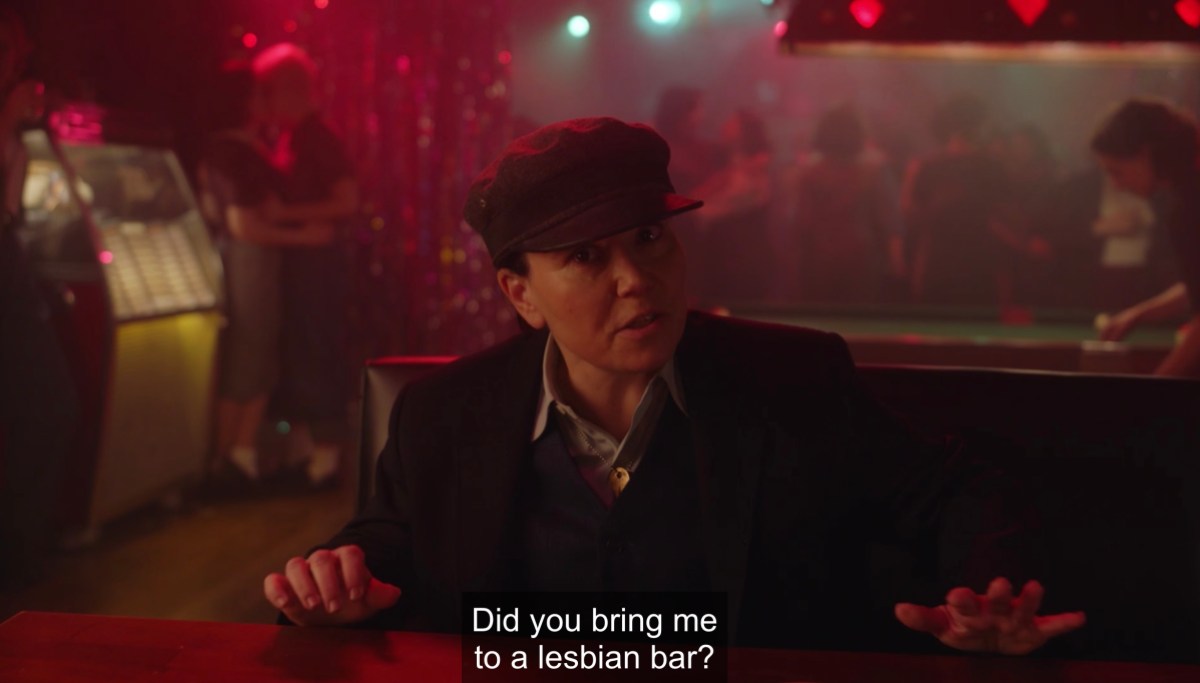 And did you do this without double-checking that none of my exes would be here?

Midge, proud of herself, admits that indeed she did. But Susie’s not having it. Midge wanted to try, she says, and Susie never talks about herself. “Yeah, ’cause it’s none of your business,” Susie replies. Midge wants Susie to know she is “totally comfortable with you being whatever it is you want to be.”

Borstein plays the scene obtusely at first, and I was nervous for a big gay denial. But no denial comes, just frustration: Susie feels that Midge has encroached on Susie’s private world. “How did you even know about this place?” Susie asks. “What, you hang out on Christopher Street asking guys with carnations in their lapels where to find a butch bar?” (They earn the laugh.)

It’s a cheeky and characteristic exchange in which Midge’s attempt at allyship is, like so much allyship, revealed to be a miscalculation of ego — Susie’s capable of making romantic decisions and finding lesbian bars without Midge’s help, and Midge’s approval (or not) holds no weight on Susie’s sexual pursuits:

Susie: This is the Village. I live here. You think I don’t know how to find a lesbian bar? There are three within rock-throwing distance. Two doors down, there’s guys sticking their fists up each other’s asses. This is my town! I know everything!
Miriam: You are always alone. Always.
Susie: So the fuck what?
Miriam: I don’t want you to be alone.
Susie: Let me worry about that.

Susie is focused on her work and her business, she reiterates, charging out of the bar. We’re left wondering if Susie’s stated prioritization of work over love is a manifestation of internalized homophobia or a desire to obscure from herself and Midge that her obsession with Midge is effectively preventing her from considering other options. Conversely — although it’s 2022 and I’m not inclined to give creators credit for being amongst the first to represent a consistently marginalized group when they didn’t even do it on purpose — perhaps Susie is asexual or demisexual and homoromantic.

It’s an interesting set-up with lots of possible pathways, and I was eager to see what would ensue in future episodes, but then I read an interview conducted at the Season Four premiere with Alex Borstein, where her comments on Susie’s sexuality suggest that this scene existed to wrap up an issue, not to set a story in motion. She argues we’re imposing modern standards of openness on a closeted time. As if most contemporary shows about this time period haven’t in fact managed to draw full LGBTQ+ female characters, for example Bomb Girls, Masters of Sex, Alta Mar, Ratched and Call the Midwife. She then suggests Susie’s a “40-year-old virgin” who is still unaware of her own sexuality, but she’s in love with Midge, but also “wouldn’t pass up a night with Lenny Bruce” because she’d “sleep with talent whatever the package.” Okay?

Following the fumble of Shy Baldwin’s story, and the straight-washing of the entire West Village prior to Episode 404, I’m still left simply feeling that The Marvelous Mrs. Maisel thinks addressing the genuine full implications of anything, let alone queerness, would impede on the show’s zany, apolitical tone. They simply don’t want to tell gay stories. It often feels like so much pre-2010 gay content: that the show is using the characters’ homophobia to cover up their own, and that they’re doing so at the expense of a far richer and more complicated narrative.

Of course the season is far from over, and of course I will continue watching it and perhaps this show will surprise me, in which case I will eat not only my hat, but also all of these hats, which I think would qualify as a very hearty plant-based lunch: 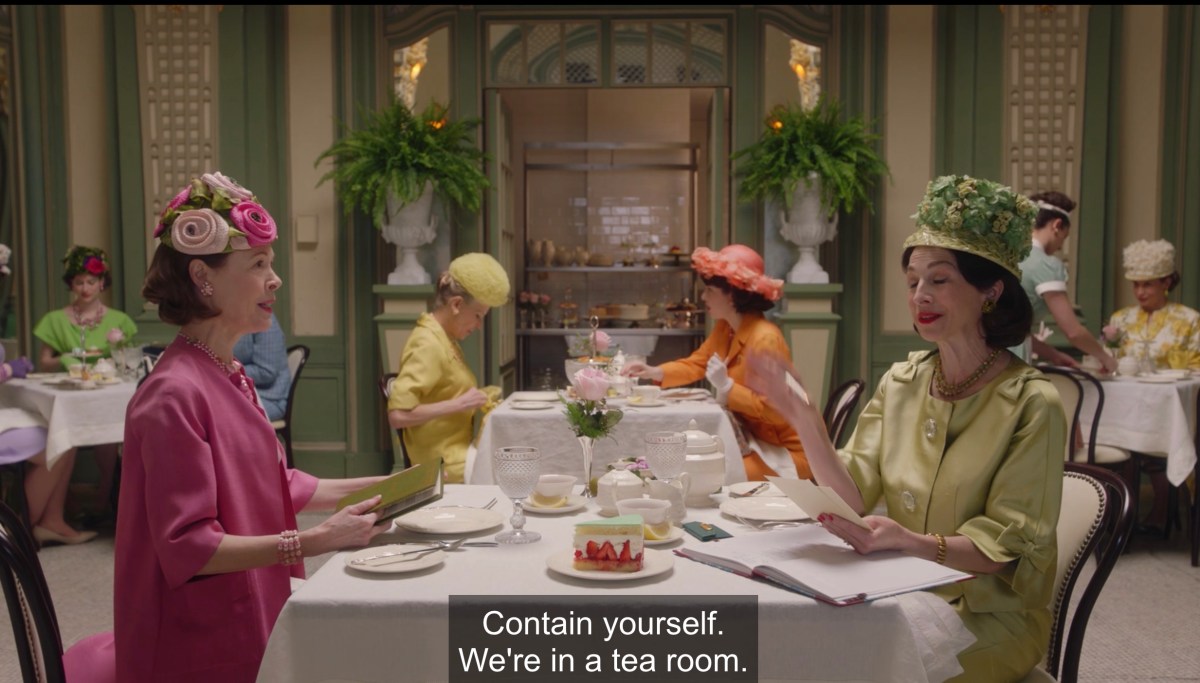