“To continue reproducing racial inequality, the system only needs white people to be really nice and carry on, smile at people of color, be friendly across race, and go to lunch together on occasion…But niceness is not courageous. Niceness will not get racism on the table and will not keep it on the table when everyone wants it off.” – Robin DiAngelo 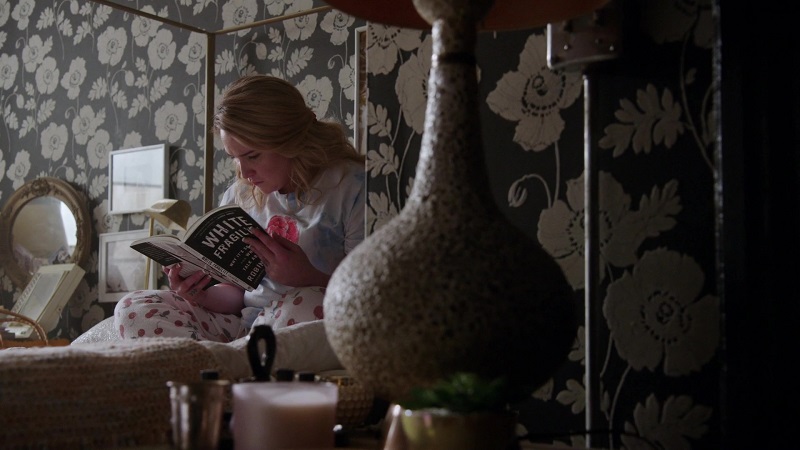 After realizing that her inability to grapple with race caused her student actual harm, Davia begins doing the work of making things right. She starts, as she should, with herself. She reads the book Malika recommended — White Fragility by Robin DiAngelo — and recognizes herself in the text. From her “colorblindness” to her defensiveness in response to critiques, Davia sees where she’s fallen short and sets out change, starting in her classroom.

“Let’s talk about ‘Gumboot Becky,'” she says, opening up a discussion with her students about what she did wrong. Davia’s candid about her misstep and her intentions and her students respond, candidly, about how the performance made them feel. She apologizes and acknowledges the ways in which her whiteness contributes to blindspots. Davia’s pledge to do better is accompanied by an invitation to her students to hold her accountable. The students recognize her sincerity and engage with her even as she pivots back to the reading.

Davia reaches out to her school’s principal to talk about Andre’s involvement in the diversion program. The principal defends the program as “tough love,” an effort to divert at-risk students from gang life. Thankfully, though, his voice isn’t the only one Davia hears: she spends time with colleague — a woman of color — who (rightly) condemns the program as the first step of the school to prison pipeline. Rather than helping students avoid entanglements with law enforcement, it provokes them, the teacher explains. She encourages Davia to join the equity committee, a group of teachers committed to finding ways to close the achievement gap, and Davia readily agrees.

But later when Davia runs into the principal and highlights Andre’s success, he takes it as evidence that the diversion program is working. Undeterred by his resistance — why I’m not sure…read the room, Davia — she mentions that she’s also joining the equity committee. He pivots back towards her and issues a thinly veiled warning to stay away from the unsanctioned group. Davia’s got a good thing going here, he essentially says, it’d be a real shame if something happened to it. 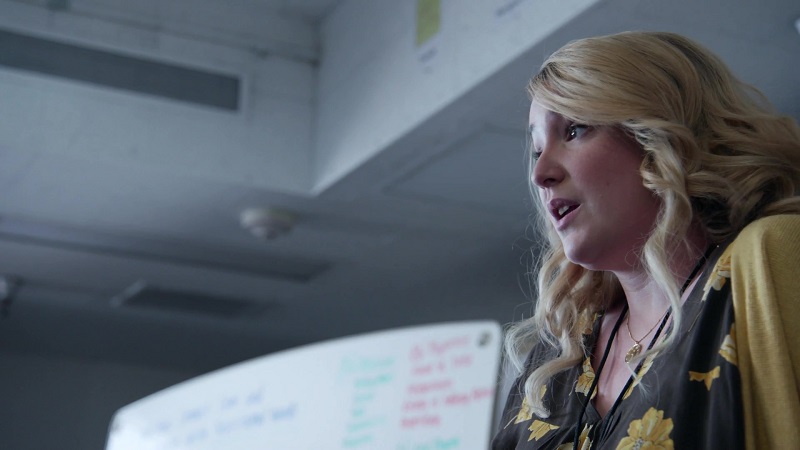 It’s all come too easy for Davia until this point…not easy as in simple — recognizing and admitting your failures is always challenge — but easy, compared to the consequences of those failures which are often born by people of color. But now her allyship is being tested: can she be a real ally to her students or to the people of color in her life if, when faced with consequences for her actions, she wilts? Later at the Coterie, Davia asks Mariana for her advice. Which would she prefer: an ally for the longterm to help change the culture or an ally willing to fall on their sword and risk losing their job. Mariana’s answer is quick and unequivocal, “I’m not sure under-the-radar allies are much help. Soft support doesn’t really help make the change that’s needed.” 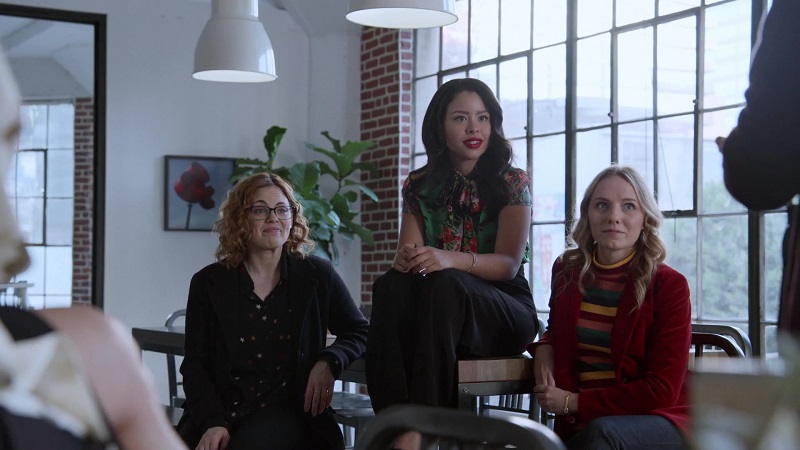 Meanwhile, the rollout of Mariana’s activism app continues, this time with an accompanying media blitz. Her team poses for pictures and gets interviewed about their experience as the first all-female team at Speckulate. The reporter/photographer gets shots of Mariana and Evan together and, as usual, the interactions are a bit more tender than you’d expect from a CEO and their employee. Once again, Raj looks on, jealous about the pair’s connection but this time, instead of provoking a fight with Mariana, he opts to spend time with the object of his recent fantasies, Isabella. Unbeknownst to him, though, the entire outing — performing magic, dressed as an elf, at an afternoon kids’ birthday party?! — was okayed by Mariana in advance.

But while Raj is showcasing his talents for a rapt crowd of eight year olds, Mariana starts to confront the reality of her relationship with Evan. News about Amanda’s sexual harassment suit against Evan has leaked and Kendra, Speckulate’s COO, wants Mariana to counter the allegations by publicly reflecting on her work experience with Evan. He meets her on the roof and Mariana refuses Kendra’s request. She doesn’t want her story to be used to discredit Amanda and doesn’t want to contribute to the narrative that women shouldn’t be believed. But it’s more than that…Mariana can’t say Evan hasn’t crossed a line because it’s not true. She knows what their relationship has been, even if they were both too scared to admit it themselves, and finally gives voice to it.

Mariana: Kendra asked me if you’ve ever crossed the line and I lied. I can’t honestly say that a professional line hasn’t been crossed between us…and not just by you.
Evan: What do you mean? We both crossed a line?
Mariana: I think that we have feelings that are more than professional.

Mariana admits that she has feelings for Evan, sometimes, but remains committed to her relationship with Raj. Evan asks what she’d do if she weren’t in a relationship but Mariana concedes it wouldn’t change anything. He’d still be her boss and their relationship would taint everything she accomplished. She rejects his offer to invest more into the app, pledging to find a way to grow it on her own. Evan’s dismayed — what’s he supposed to do with all these feelings? — but Mariana urges him to let them go. Evan agrees but storms off in a huff, like the privileged white man who’s never been told no.

Later that day, Mariana returns home, intent on telling Raj all about what happened, but their conversation is interrupted by a manifesto sent out anonymously to all Speckulate employees. The manifesto, subtly titled “Why the women engineers at Speckulate aren’t equal to the men,” hits all the aggrieved white man classics: women being less competent, reverse discrimination against white males and men being preferable to women because women value work/life balance and having families. But the manifesto levels a specific charge against Mariana: the fact that Evan had to bail her app out, using $10k of his own money, after it failed…thus proving men are better coders than women. The latter part is bullshit, obviously, but Mariana wonders how the anonymous manifesto writer found out about the $10k bailout.

That’s when Raj remembers that he told Alex about the bailout during a drunken conversation. Mariana’s understandably upset: Alex has been nothing but trash to her since the day she started at Speckulate and in the wake of her app launch, he’s only gotten worse. Raj promises to find evidence linking Alex to the manifesto but for Mariana and her career, the damage has already been done.

+ “Fragility” is the second episode of Good Trouble directed by the illustrious Spencer Hastings Troian Bellisario.

+ Sure, Isabella’s time with Raj was pre-approved by his girlfriend but her being slightly less shady this week does not mean that I’m ready to trust her. That girl is shady and it feels like it’s only a matter of time before something blows up at the Coterie and Isabella will be right in the middle of the wreckage.

+ Though the episode makes a strong case for believing Alex is behind the manifesto, I’m unconvinced. My money’s on Sam.

+ Would it be uncouth to start a pool to bet on how much longer Jamie and Callie are going to last? Methinks, not much longer.

Next Week: Callie, you in danger, girl.