Craving a little more time with the new characters whose names I’ve already forgotten? You’ll be pleased as a porcupine to hear that Ryan Murphy and Brad Falchuk are in talks with Reilly for Season Five, which — thank the stars! — “opens the door for Oxygen’s reality competition The Glee Project to return for a third season.”

Reilly said he’s been enjoying the New York/Lima dual storylines, finding them “seamless,” and not just because they’re paying him to say that. Furthermore:

“I do think if we can continue to follow a broad array of characters, it’s like life: You have relationships, you have friends — they go off, their lives go on, and you get together and maybe you maintain a friendship, maybe you lose distance. I think we can do that within this world of people you followed.

When asked if the series might relocate entirely from an Ohio-themed soundstage in Los Angeles to the set of Friends, Reilly noted that he’d have to “talk to Ryan and see where he’s at right now. I don’t know. I wonder — could it and should it naturally move [to New York]? But we have to talk about it.”

At the TCA Fox All-Star Party, queer questions abounded. According to Afterellen, somebody asked Glee star Lea Michele about the possibility of a romance between her and Quinn Fabray happening onscreen (the storyline currently plays out exclusively in wildly popular fan fiction communities but has yet to break into the network mainstream), to which she responded: “Yeah, that’s so funny. People — I don’t know. They think it’s like a thing. Well, I mean — Rachel’s in New York now with Kurt and stuff like that so….”

Everybody seems to be forgetting about the Metro-North pass!

Naya Rivera also spoke to Afterellen.com about whether or not we’d ever see her beautiful face on our television screen again:

“I’ll definitely making up for lost time in the episode we’re currently shooting, and then I’ll be around for the rest of the season. I was excited. I love the new format, I love all of the new kids they’ve brought on to McKinley. It allows the character [Santana] to grow and that’s important.”

“Obviously Santana doesn’t like when things don’t go her way. Even though she was the one that sort of called it off, I guess, she’s still not happy about that. You’ll get to see how that plays out.

Brittany’s found someone else so I would only hope that Santana has grown as well and maybe see what else is out there. Maybe [she’ll find someone else]. You never know!”

Jane Lynch told AfterEllen that it’d be wise for Santana to shack up with a lady who knows how to spell, and shared her thoughts about Ryan’s intentions with the Brittany storyline:

“I hope she can grow up and have a mature relationship with someone who wants to be with her. The Brittany/Santana thing — I think what Ryan was showing was orientation for some people is fluid, it’s not over in this homosexual category, or this heterosexual category and I like that message. Because there people out there who feel that way as well — that it’s the person they fall in love with. So that was nice to see that, but I do hope that Santana will move on and I bet she will. She’s going to have a grown up relationship. She’s gonna go all lesbo. We just did an episode where she’s gotta decide where her life is going to take her and it’s not cheerleading school in Louisville. It’s elsewhere.”

I really hope that it’s “The Planet.” 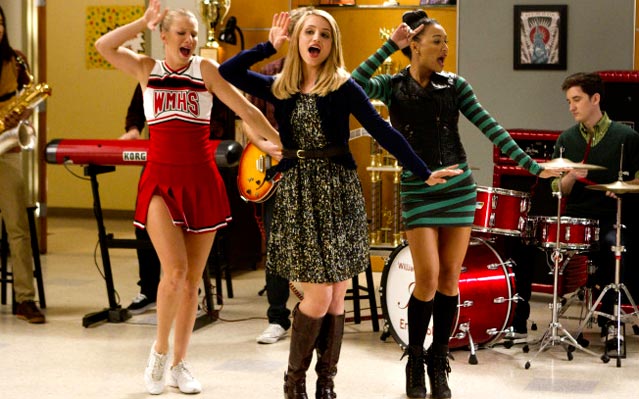 Glee opened Season Four with relatively decent ratings — The New Rachel snagged 7.41 million U.S. viewers and took first place in the 18-49 demographic, followed by an impressive uptick towards 7.46 million for “Britney 2.0.” Since those first two episodes, however, the show has been vacillating in the 5-to-6 million range, a huge drop from its initial two seasons spent in the 8-to-10 million range. In fact, Glee‘s eight lowest-rated episodes of all time happened this season, with Dynamic Duets bringing up the rear with a depressive 4.62 million viewers.

Many suggest iTunes sales influence renewal decisions — numbers which have possibly also been slipping as of late, with Glee‘s most recent albums failing to crack the Top 20 despite all previous albums never charting below the top ten. But it’s possible that new methods of Billboard rankings, which now account for radio play as well, are responsible for the variance in chart-toppers.

I endeavor to suggest that Glee’s ongoing existence is directly related to my increasing distaste for the program, which I have an ethical and statistical obligation to recap for this website — as proven by the continued renewal of Showtime’s embarrassing reality program The Real L Word despite general suckage and low ratings, a show I hate recapping even more than I hate recapping Glee.

However, I recognize that the world does not, in fact, revolve around me, and perhaps the show’s renewal is simply due to its relative superiority rather than its absolute superiority. A passionate Glee tumblrer did the math and determined that even with the present ratings, the show still makes good money. Glee still out-performs Fox’s other non-animated scripted shows aside from The New Girl — hell, it out-ranks the final season of The Office on Thursday nights. Plus, the show will soon be up for syndication. Glee has also, obviously, taken on great cultural relevance despite its 567 faults, including but not limited to that Potato and also misogyny.

I also recognize that if cancellation didn’t free me from recapping Glee, I’d probably be really upset about it, if only because I still enjoy the musical numbers even when the plot often inspires me to get off the couch and lock myself in the bathroom until it’s over. In his acceptance speech, Colfer thanked the fans and noted that being handed an award by Ellen DeGeneres is “just incredible.”

Lea thanked the Gleeks and, kindly, everybody who voted for her. “What you guys can do together, it’s unbelievable,” Lea noted.

Gleeks…two couples getting back together by Valentine’s Day. One might be preggers. Guesses?

Ah yes. Pregnancy plots are clearly what this show does best. Also, this:

In other words: “Don’t stop believing, hold on to that feeling.”