Welcome to the sixteenth episode of the fifth season of Glee, a series of commercials for individually wrapped slices of American cheese. This week, an itchy assortment of iron-clad Daughters of the American Revolution will be signing and dancing their way through a majority of your personal issues, including Sephora, face lotion, dim sum, CVS Extra Bucks, lip gloss and underwater lovemaking. 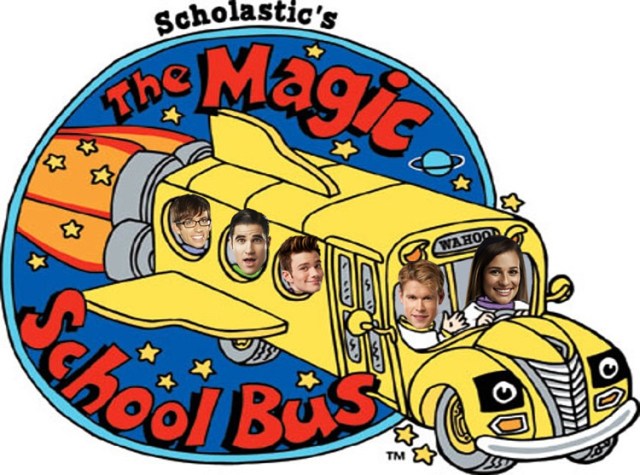 This week’s episode was a strange brew of Educational Film From Health Class, After-School Special and Glee. Also, there were no lesbians. I fear that this recap is not as funny as usual, but I hope everybody here understands that as CEO, CFO, Editor-in-Chief and head writer of Autostraddle.com and a very heavy participant/thought-leader in that thing I invented called A-Camp that starts in FOUR WEEKS, I have to sometimes just accept that “perfect is the enemy of done.” I learned that from Ariana Huffington and she is REALLY rich, so.

We open with a very interesting educational film that turns into a PSA about getting tested for STDs. 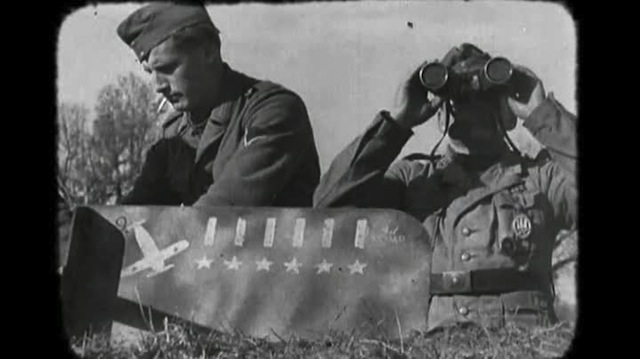 Eh, looks like that Ryan Murphy kid is at it again with his rowdy band of seamen

All the boys are dressed up like homosexuals. See:
http://youtu.be/OcCCa93Ur1M

Yup, this is gonna be an Issue Episode! 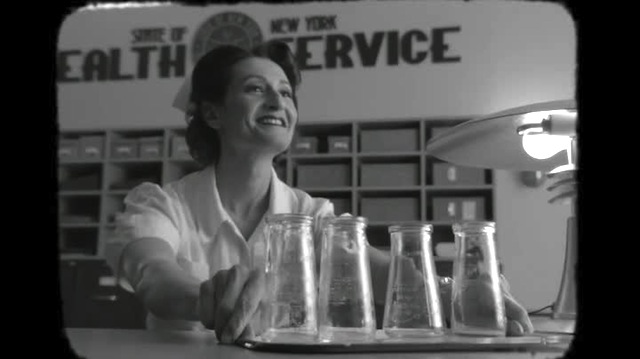 Here, these are for poision 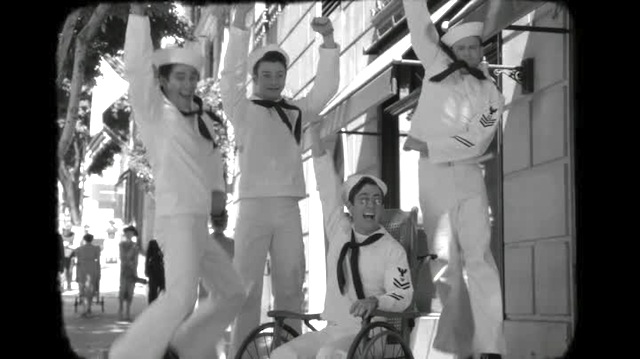 We return back to life and back to reality where a young Blaine Anderson is raving about the culinary delights available in this fine city of New York. Blaine loves food!

Blaine: “New York is the United Nations of Restaurants!” 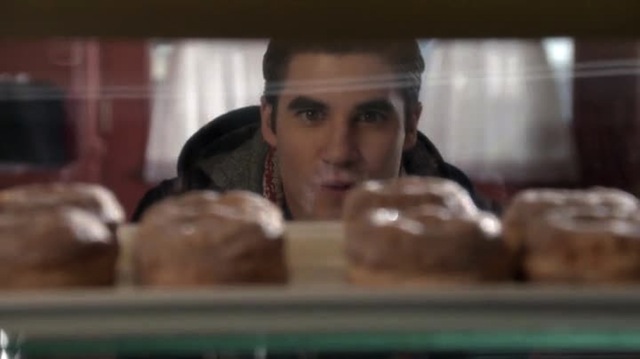 So many cock rings, so little time

Blaine: “If a croissant and a donut made sweet sweet love, their baby would be a cronut.”

In fact, Blaine loves food SO MUCH that now his pants don’t fit anymore! 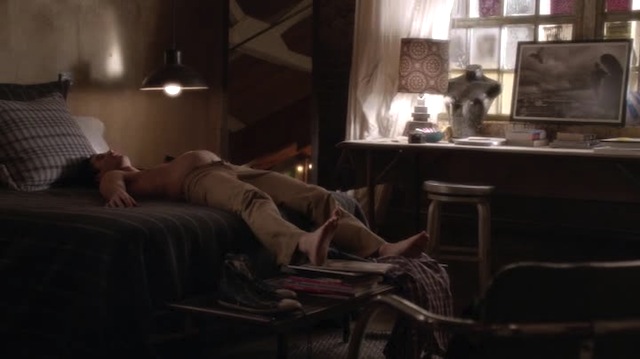 Petition to The Universe to take that term out of circulation? 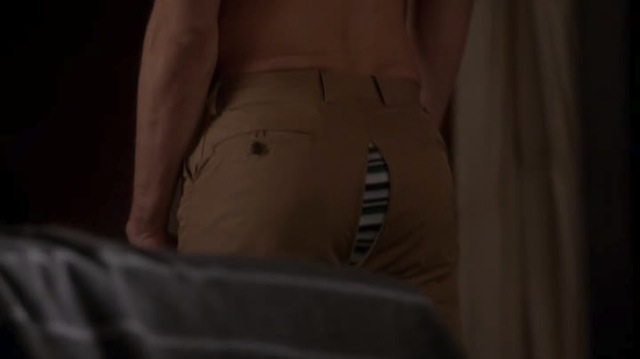 This is why you should never buy pants at Forever 21

We then mosey on over to the hallowed hallways of Fake New York Film School Academy where Artie’s wheeling around and monologuing about all the hot girls he’s been banging since moving to the city where instead of being a nerd in a wheelchair who bagged three incredibly hot and mostly intelligent girlfriends, he is a nerd in a wheelchair who is bagging a series of casual lovers.

Artie: “At McKinley nobody wanted anything to do with me because I was a nerd in a wheelchair who tucked my sweaters into my pleated khakis. But here I do exactly the same thing, and everyone thinks it’s cool! In high school, I had to beg girls to go out with me, but here, I’m lady bait!” 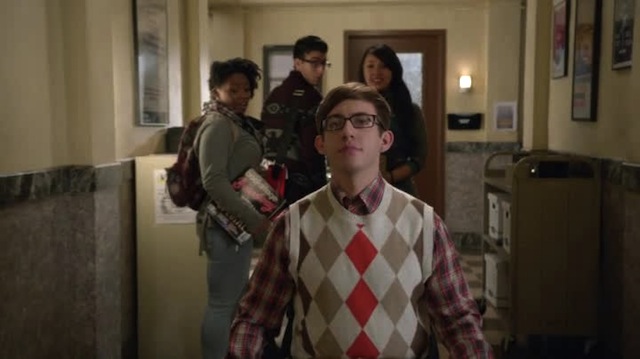 Ladies love his experimental films and the version of Crash that you accidentally rented that one time thinking it was about drugs but it was about people who got sexually aroused by car crashes. 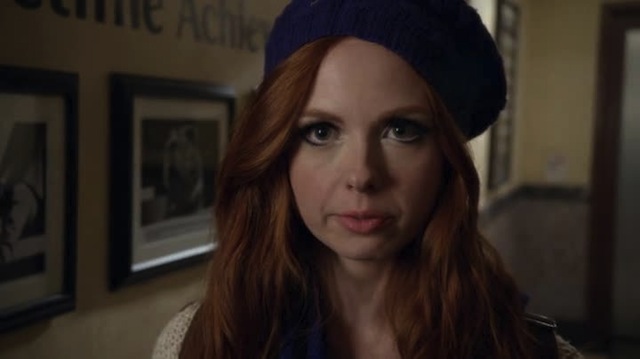 Just tell me the truth, did you steal my granola bar and use it in a short film about snacks

But Artie only has eyes for the lesbian from Friday Night Lights, who is known as “Julie” in this fine program. 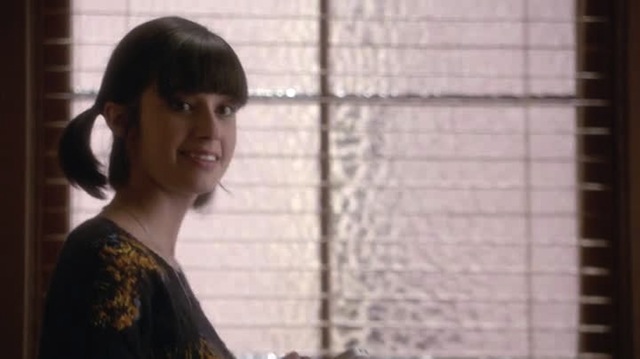 Oh hey I was just on my way to a lesbian bar with the worst Julie of all time, Julie Taylor

She’s doing voiceover for his terrible film about a plastic bag floating in the wind. I think I saw this one at the Ann Arbor Film Festival. Then Artie sings “Addicted to Love” by Robert Palmer which is about hooking up with hot babes.

Artie asks Julie out on a date and she says she doesn’t date people she’s working with. Womp womp.

Over at Fake Julliard, Kurt and Blaine have apparently enrolled in a one-episode Stage Combat Intensive that undoubtedly will teach the young rascals how to joust with pool noodles and kill Tybalt. 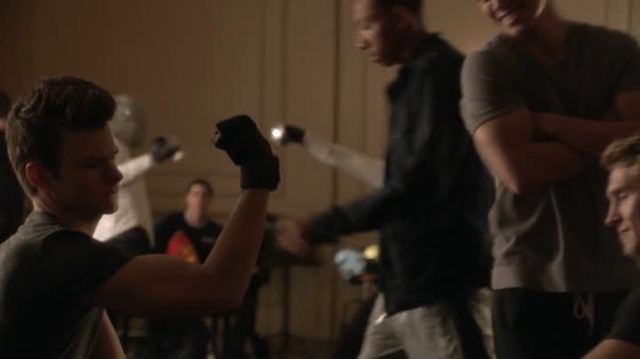 Blaine voiceovers about how Kurt’s really gotten in shape and become a heartthrob with bulging biceps while Blaine binges on Cheetos.

Blaine: I’m actually feeling a little jealous. Back at McKinley, I’d be the one getting fawned over. I lifted. I boxed. I was in the Dalton Fight Club, for God’s sake. 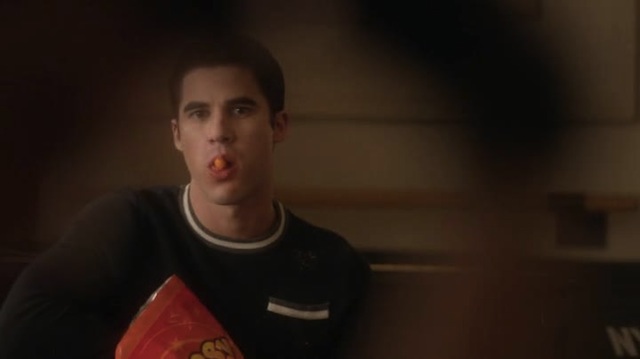 Eh, this is okay but I think I’ll stick to beejers

Blaine laments that now Kurt is the “hot shot” and after his Gay Bash last week, a lot of people look at him as a hero and now he’s “leading man material.”

Blaine: “I’ve always known he could be that, but most people didn’t. I guess I’m just not used to Kurt being seen as a sexual object.” 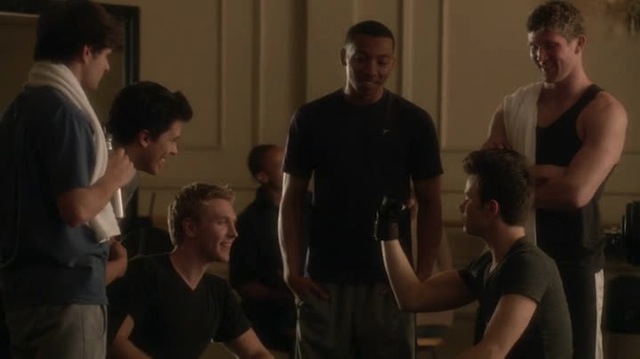 We sweep on over to Chez Mercedes, where Sam and Mercedes are french kissing with all their clothes on when Mercedes interrupts the action to tell Sam that she’s a virgin and isn’t ready to get “too serious.” 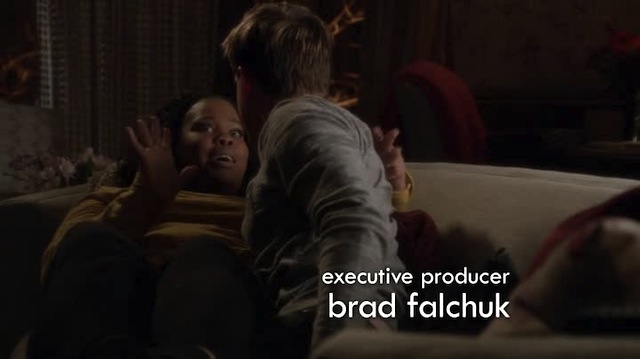 Mercedes: I don’t wanna do anything until I know that I should.
Sam: Okay then, we can go as slow or as fast as you’d like to. You get to call the shots.

Cut to Serendipity, a delightful restaurant on the Upper East Side generally filled with tourists eager to consume a goblet of what chocolate ice cream becomes when it sits in your freezer for 1+ decades. 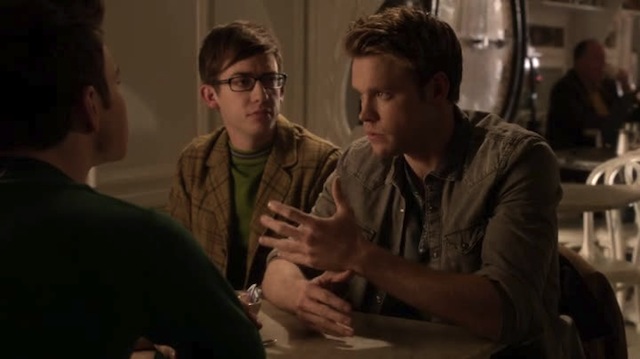 Yes, it’s true, I picked up a very small baby in one hand

Sam wants his pals to accompany him to The Clinic so he can find out if he’s got any STDs in his pants before attempting to remove Mercedes’ pants. The boys are shocked that the terrific twosome have yet to Put The Tools in the Shed, but volunteer to accompany Samuel to The Free Clinic On 14th Street because getting tested is The Responsible Thing To Do.

Then the waitress arrives with their beverages and Kurt notes that a Frozen Hot Chocolate has been ordered on his behalf although he did not express a desire for one!

Blaine: “It’s my gift. Trust me, you and your crazy self-denial dietary regimen will thank me once you have one sip of this frozen hot chocolate.” 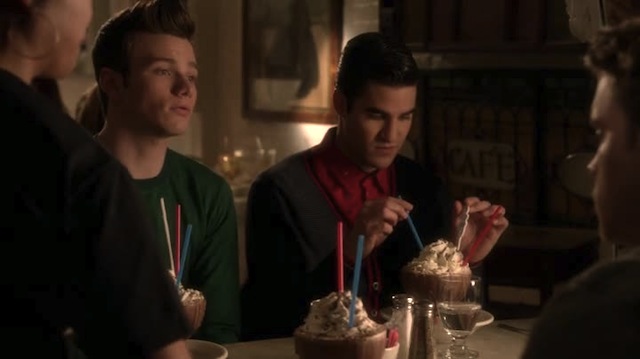 “Hi Mr. Straw, this is Mrs. Straw. Mrs. Straw lives ALL the way across town at Whipping Cream Manor! Let’s play in the frozen lake!”

We then cut to the Doctor’s office, which’s about fifty times less crowded and calmer-looking than free clinics actually look in New York (trust me I HAVE BEEN TO ALL OF THEM), where a kind doctor informs Artie he has chlamydia. 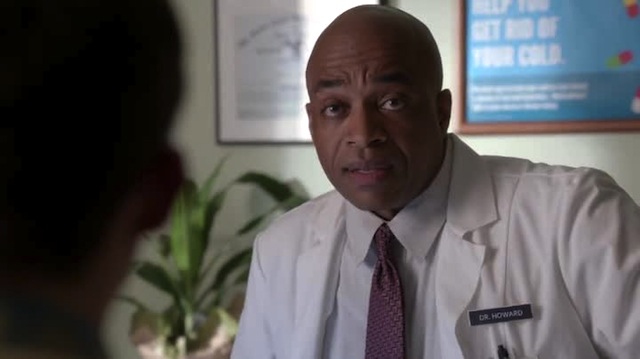 I’m gonna give it to you straight, kiddo: Riese would prefer if all your scenes and basically all the scenes in this show were replaced with Santana/Dani Sex Scenes. We’re gonna have to hold you here overnight until she returns.

Artie’s surprised ’cause he had no symptoms, but that’s typical. The good news is that he’s not a lady trying to get pregnant, for whom such a thing could be a major ish. Anyhow, the doc explains that it’s no big deal, he just needs to take some antibiotics for 7-10 days and he will be fine. But Artie feels really awful, as personified by this neat costume piece: 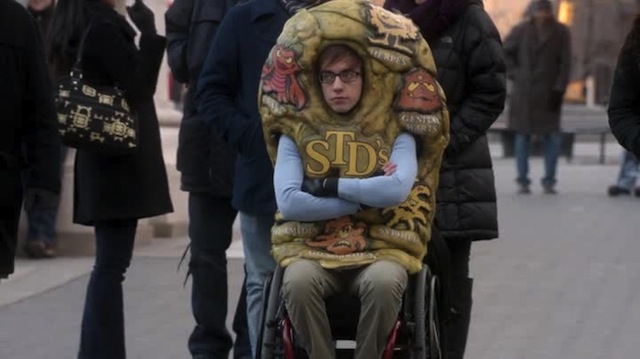 Ugh it was on sale at Joyce Leslie OKAY

I felt like he looked a little depressing in that giant booger so I had Grace give him a little flair: 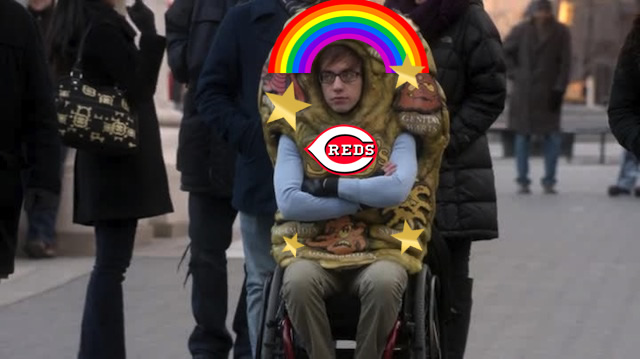 Isn’t that so much better

Later that same day at The Barbie Bushwick Dreamhouse Loft, the boys are enjoying some Premium Channels on Demand when Artie announces that he has chlamydia. 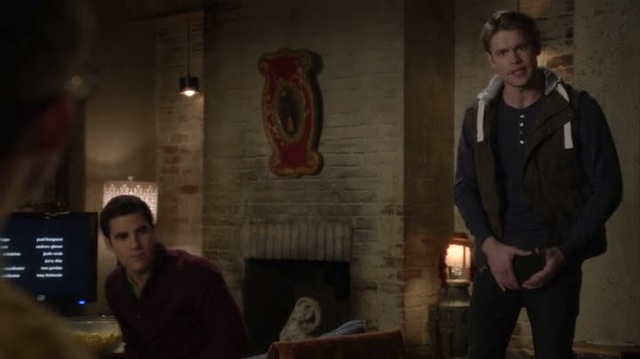 Artie says the first time he tried to use a condom, he got nervous because they were locked in a cabinet and then it was “like putting on a tiny, greasy, banana-flavored wet suit.” Then Sam decides it’s time to slut-shame Artie, because he doesn’t know what slut-shame means, and I actually laughed out loud throughout this bit, so a tip of the hat to you, Glee.

Sam: No, Artie, okay? That’s… there’s no excuse. That is completely irresponsible! You have to wear one every time.
Blaine: Stop yelling. I’m sure he feels bad enough.
Sam: No, Blaine, this isn’t okay. Artie needs to be slut-shamed. I’m slut-shaming you, Artie!
Kurt: You’re lucky you just got chlamydia. I mean, you could’ve gotten something that can’t be cured.
Blaine: Yeah, you could’ve gotten somebody pregnant. Did you think about that?
Sam: Slut! SLUT SHAME! 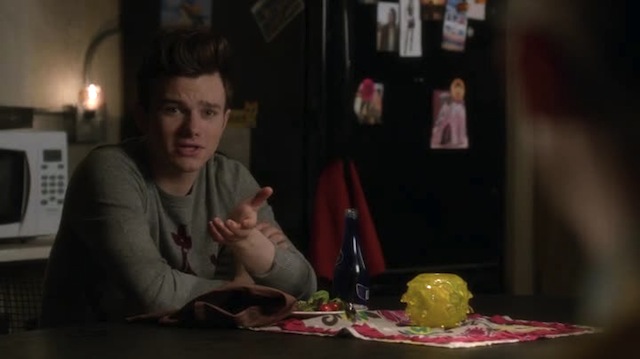 What if you’d gotten Fake Quinn pregnant in a hot tub?

Blaine says that Artie has to tell the girls he’s been roasting the broomstick with that he has the clap.

Cut to Artie telling the girls he roasted the broomstick with that he has the clap. His first lady lover totally freaks out that she’s gonna get a canker and calls him “Patient Zero” and also “disgusting” and says she’s gonna tell EVERYBODY about it so that nobody will ever want to Rub Bacons with him again. 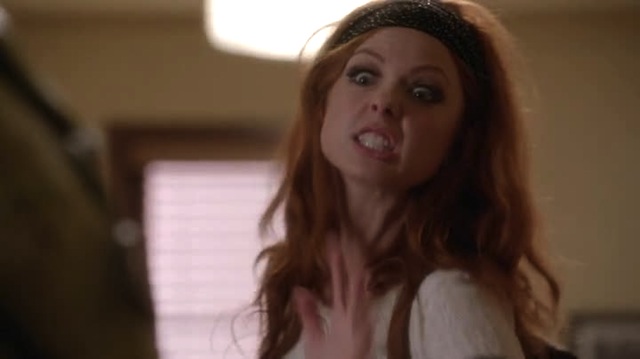 The girl with an alternative lifestyle haircut is way cooler about it, she’s like yeah whatevs, okay I’ll go to the free clinic, who knows maybe I gave it to you, see ya later alligator! 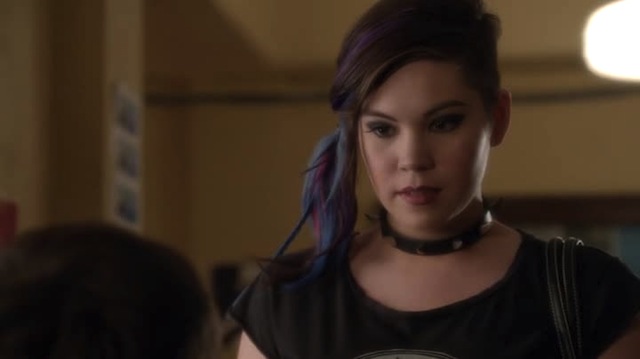 Yeah, of course I got this choker at Claire’s, who wants to know

Then The Lesbian From Friday Night Lights shows up to be small and adorable and crittery. She’s changed her mind about going out with him! She’d LOVE TO! They can have dinner tomorrow night!

We then traverse an unspecified distance to a church where Mercedes has taken Sam for unknown reasons. Sam has brought Mercedes a special present — it’s a “clean bill of health” from The Free Clinic! Mercedes says he is focusing too much on what’s on the outside and she’s still not sure about going all the way. 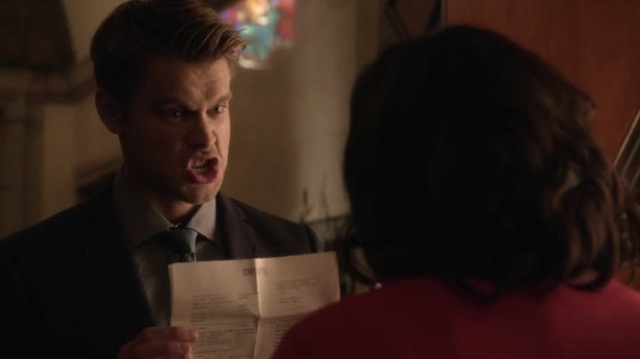 What’s this? What’s this? It’s only a certified copy of the very first Samcedes fanfiction ever written, THAT’S ALL

Mercedes has therefore taken Sam to church because she’s gonna check in with Jesus and see how he feels about the sex thing. This is bad news for Sam ’cause I feel like Jesus and God and those peeps tend to err on the side of “no” on these issues. 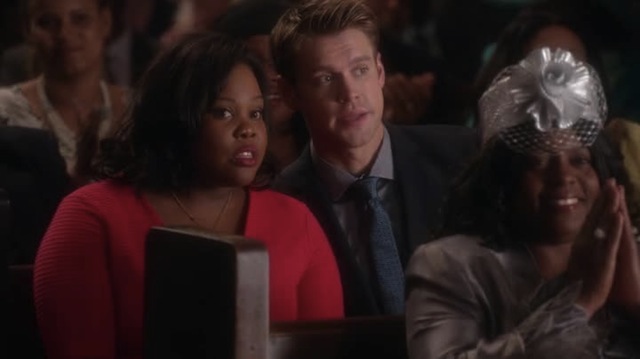 Pssst Mercedes. Have you noticed that I’m the only white person here

But first she’s going to sing an ’80s new wave hit to her preacher, specifically Foreigner’s “I Want To Know What Love Is.”