Hello and welcome to the 21st episoe of the fourth abysmal season of Glee, a show about what happens when innocent children eat too many meatballs, do a lot of ecstasy, staple their clothes together and cheer like wild hyenas while performing their parents’ favorite songs.

You guys this episode was SO STUPID. Just stupid. Do you remember when Mr. Shue’s wife had an imaginary baby? Here’s the thing: we can handle only one imaginary baby per episode. Just one imaginary baby. This episode was sort of innocuously ridiculous, but really this entire SEASON has been like a nonstop Imaginary Baby Parade. And to what end? Have any of these extensions-of-disbelief lead to fantastic moments of television? Is there still an emotional truth for us to hold onto? We can’t handle an entire episode in which not one single plot point could potentially make sense in the real world. Can just one student — just ONE — abide by the traditional rules of college admission and matriculation? Just one. Honestly, the only thing that happened in this episode that would ever happen in real life is when Burt found out his cancer was in remission. That’s right. Curing cancer is the most realistic thing on this show.

We open with a cross-country mobile-telephone-enabled conversation between The New Rachel in her Barbie Dreamhouse Bushwick Loft and Mr. Schuster, who’s rummaging around the Teacher’s Lounge looking for the afikoman. 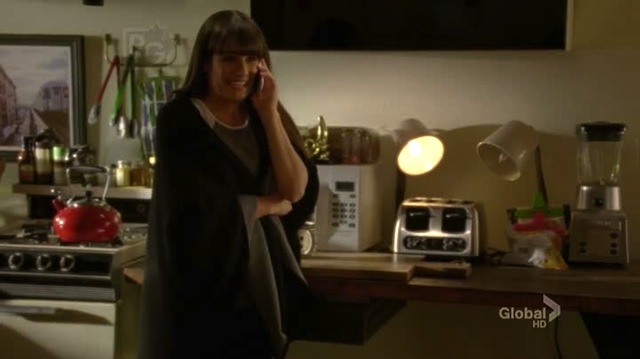 Rachel says she’s one of three ladies in the running for Funny Girl and says it’s all thanks to Mr. Shue! because she sang “Don’t Stop Believin'” at her audition.

You know, the song Finn taught the Glee Club to sing at the end of Episode 101 because Mr. Shue, shortly after taking over Glee Club, had swiftly decided to kick it — and McKinley High — to the curb in favor of better health insurance for his lunatic wife’s non-existant baby. That song! 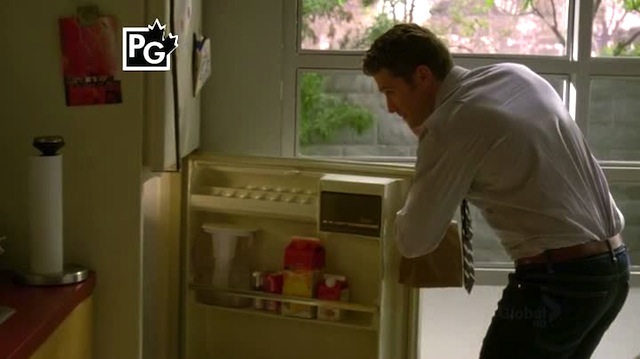 hmmm i know i left a fetus in here somewhere…

Cut to Glee Club Buena Vista Social Gentleperson’s Club. Mr. Shue shows up to share everybody’s personal details: The New Rachel may just be The Funniest Girl Standing, Will re-proposed to Emma and she re-said-yes, and Brittany’s pregnant! Just kidding, Brittany’s visiting her future college, M.I.T., because why anything. In honor of this “wonderful” news, they’ll be singing Stevie Wonder songs all week! 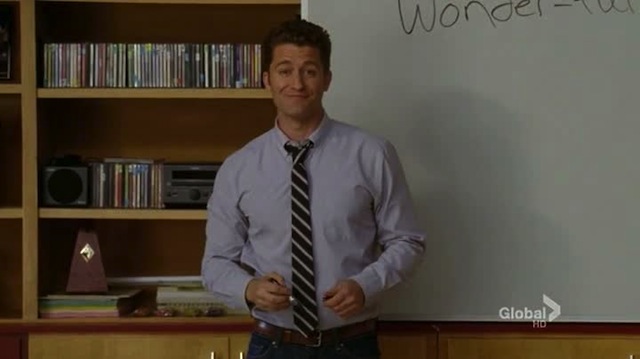 yup. you said i couldn’t do math but look how i wrote the fuck out of that word on the whiteboard 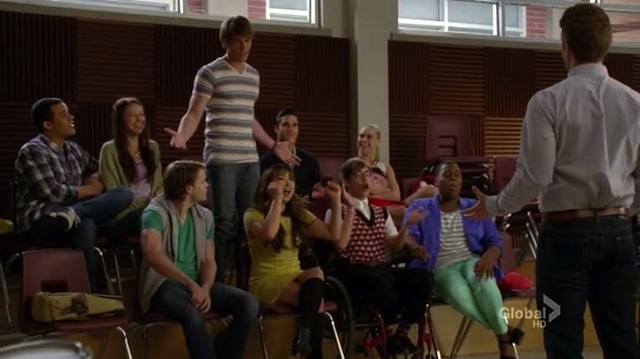 the children were overjoyed to watch mr. shue and ryder bieber-strong play the mirror game

Back in the Hallowed Hallways, Fake Quinn’s decided to pull a Classic Glee Maneuver by sticking her butt into somebody else’s life so they can see the moon reflected in her eyeballs. This time it’s Artie, who just got into the Brooklyn Film Academy, but isn’t going and he won’t tell her why and doesn’t want her to tell anybody. 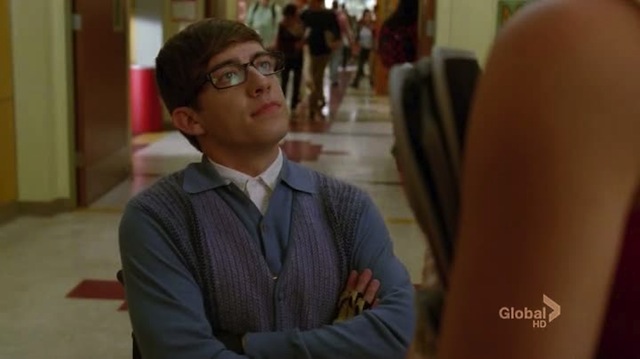 We then wrap our entire bodies in Saran Wrap, build a gigantic flume, roll around in a tub of butter, and avalanche ourselves all the way to New York, New York, where Kurt’s packing, OCD-style, for a trip back to Ohio for his father’s doctor’s appointment! 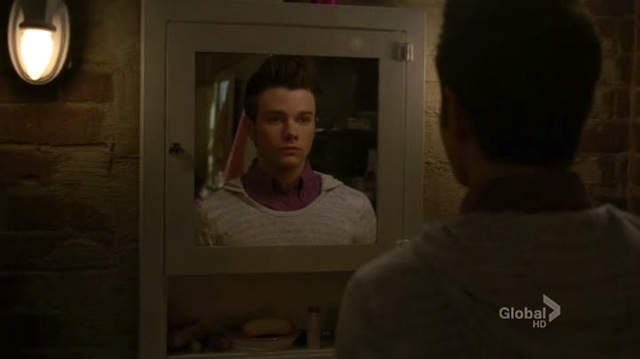 fuck that biore pore strip burns like a motherfucker

Kurt: “Yes, I’m getting a little OCD leading up to this appointment. Rachel said it was a natural response, just me looking to control my anxiety in some way. I figure I need to cut myself some slack. So what if I have a few new rituals to get me through the day.”

Okay, so Kurt says that his Dad got him through his Mom dying, so if his Dad also died that would be THE WORST. Yeah, duh, especially when this plot was used in 404 as a device to get Burt to New York and is now being used in 421 as a device to get Kurt back to Ohio, with really no other purpose besides to make me cry.

(Well, also it makes me think of real life: of friends who are dealing with or who have dealt with this and how one of the hardest parts is that it’s so rarely possible/affordable to be there for the doctor’s appointments. That’s a relate-able struggle. If only we all lived in Glee-land!)

We then board Kurt’s Magical Free New York-Ohio Teleportation Device and zoom on over to Ohio, where Mercedes and Mike Chang are ALSO visiting. What timing! 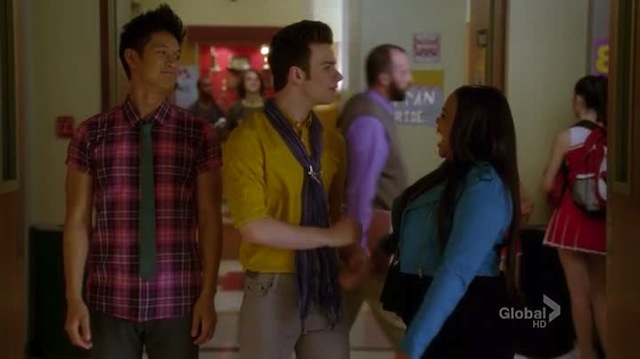 come on just pop a junior mint in my mouth for old time’s sake! 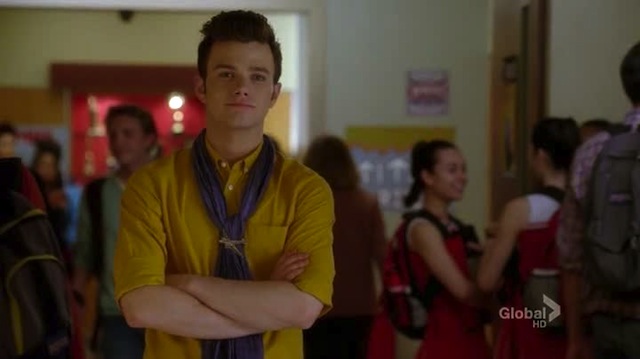 yup. that dude did me in the butt.

Cut to the Glee Room, where the kiddos erupt into multiple short orgasms of delight when the Alums show up. Then Fake Quinn breaks into “Signed, Sealed Delivered” while rubbing her vagina in Artie’s face.

I think everybody did Whippits before filming this morning. 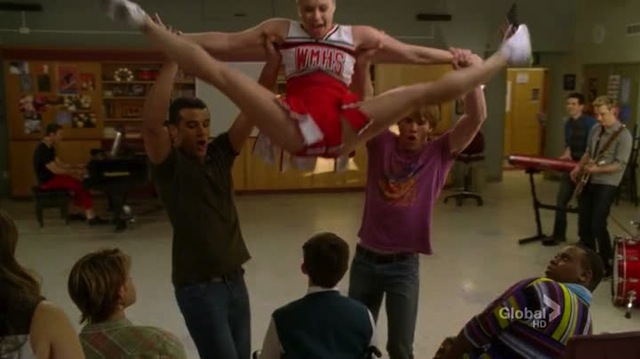 Then Fake Quinn tells everybody that Artie got into film school, just like he told her not to! Mercedes says Fake Quinn’s performance was “good” but for Regionals, it’s gotta “be great.” While the children try to wrap their heads around the concept of it being important to be great instead of good for a huge competition, Fake Quinn and Mercedes exchange some unnecessary bitchery, via which we learn that Mercedes is in town to be a vocal coach and shoot her first music video (it’s “about home”) and Mike’s there to help Glee Club with choreography. 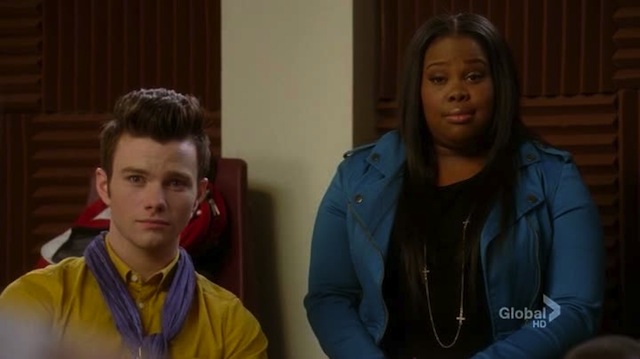 so that’s what’s passing for plot around here these days, is it

Tina’s unimpressed by Mike Chang’s insertion into this episode:

Tina: “I love you Mike. I love all my exes. But this isn’t wonderful news, it’s shocking. Now we need some guy to help us dance? Hash tag Glee Hates Girls. And what are you here to lecture us about Kurt, our horrible taste in clothing?”

It’s almost as if nobody at Glee has any idea what women are actually talking about when women actually say that Glee hates girls. 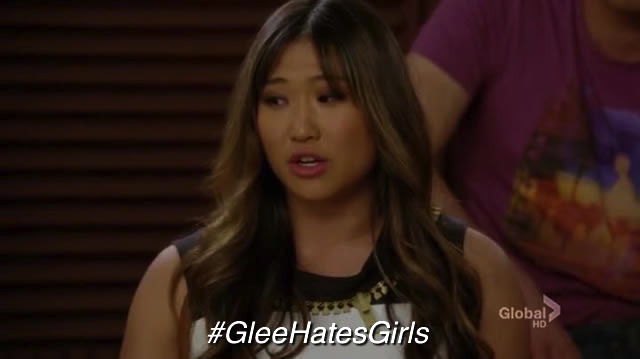 Fake Quinn chases Artie through the hallowed halls and Artie insists he’s skipping film school ’cause his Mom’s too nervous about leaving Artie all alone in a big city. 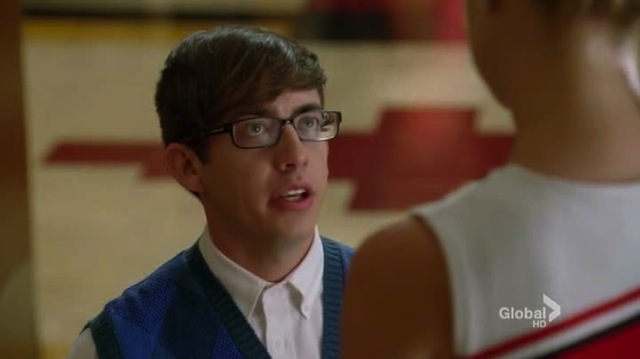 listen i just really think the social environment at the university of lima is a match come true for me, i mean i really love the harlem shake

Cut to Java the Hut, where Blaine’s chattering about the historic and exciting new world of gay marriage in New York, which happened two fucking years ago. 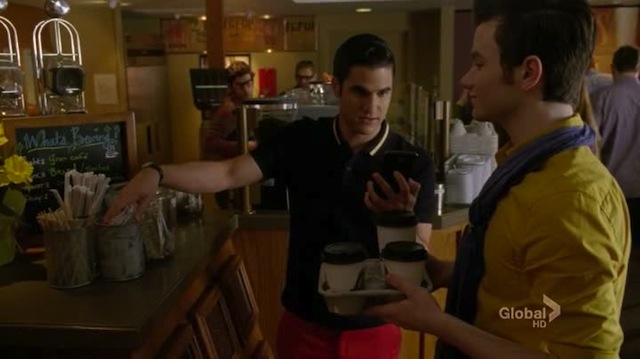 this just in: there’s been a terrible storm in New Orleans

Blaine tells Kurt that he looks sexy. Not just sexy, but “dirty sexy,” which I assume is a reference to a Klaine Sexual Position®. 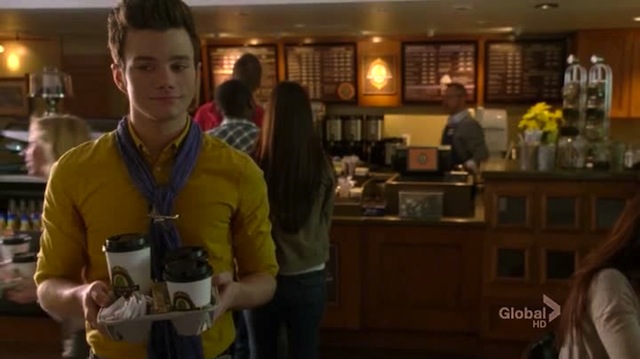 well i could go for a pony ride…

Mercedes chatters to Mike Chang about her music video, as she’s seemingly hired him as a choreographer and requires moves that are full of “club-kid sickness,” “fresh-fresh-fresh” and “smooth with a v” and Blaine steals stealthy glances at Kurt organizing his sugar packets. 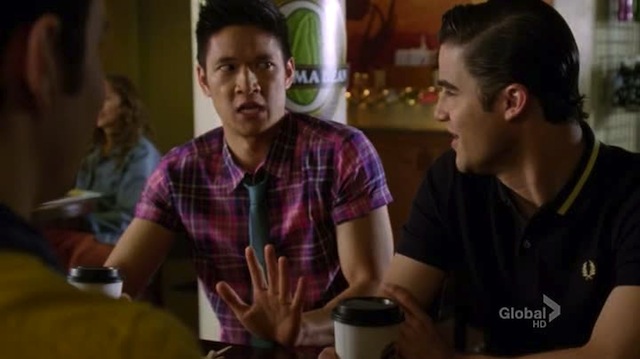 hell naw dude i told you i didn’t swing that way, dirty-sexy or not

Mercedes asks if Blaine and Kurt are back together and Blaine says they’re just friends but his eyes say “we’re just soulmates forever and in love.” Then Kurt says none of this is important because of his Dad! Mercedes says it’s okay, they’ll all get through it together. 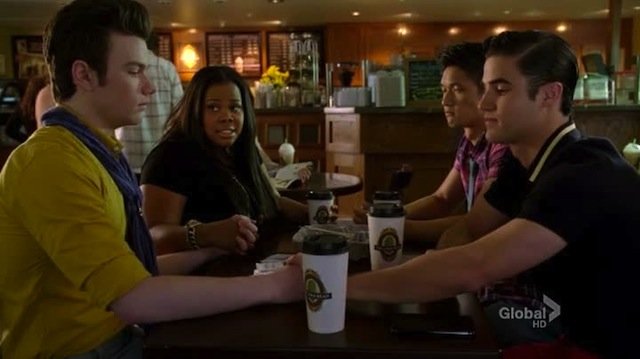 in honor of all the lesbians who could not be here with us today, let’s all hold hands and have feelings like lesbians