We wanted to see the island. The whole entire island, far away from the bulk of the tourists. More specifically I had an intense burning desire to see a few of the locations where LOST was filmed, assisted by the incredibly informative website, Lost Virtual Tour. 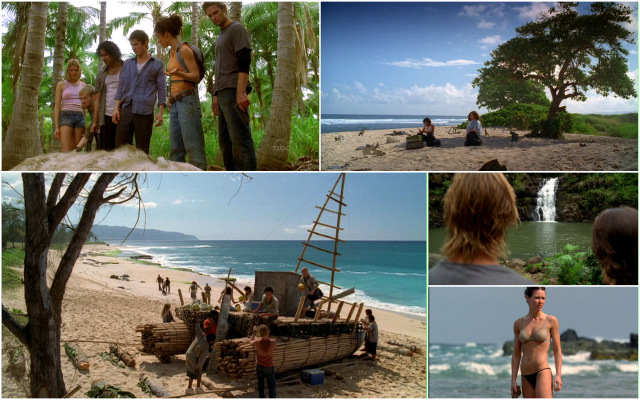 In order to properly traverse the island, we’d need a car, but the Hertz location in our hotel pitched us a $160/day car rental rate and didn’t have anything available ’til Sunday. Luckily we found a better rate online at A-1 Rent-A-Car, out by the airport, which Marni proclaimed to be “only an hour away on the award-winning Honolulu bus!”  We didn’t know which award the bus had won, only that it had won an award for sure. Probably “Best Supporting Performance By a Bus.” “Bus of The Year.” “The GLAAD Award For Most Outstanding Bus.” 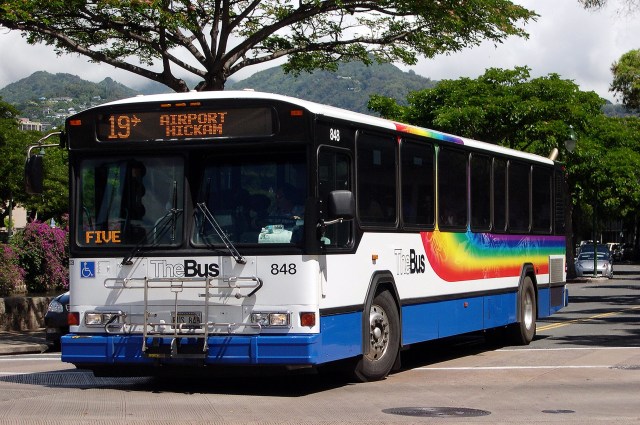 this bus is gay

This bus ride presented the first challenge to our Aloha Spirit. The bus was crowded, maybe half locals and half tourists, and we were wedged in at the very back of the bus in the bench of seats facing outwards. A man to my left asked Marni about her Canadian water bottle and when he asked where I was from, I said Michigan, because that seemed accurate and unlikely to start additional conversations about his trip to San Francisco or his brother who lived there for two years in 1978 or whatever. So we kept to ourselves, really, but then another woman, sitting on a side bench, asked me, “Did you say you were from Michigan?” and my body was moving in the general direction of her body to answer her question when everything suddenly stopped.

The bus, that is.

The bus lurched. The bus driver had slammed the breaks with remarkable force, and because I was the girl in the back of the bus on the bench facing the entire bus with nothing in front of her, this was when I literally flew out of my seat and landed, then tumbled, onto the steps between the front of the bus and the back of the bus. I was wearing a sunndress and flip-flops, that’s it.

Initially, I couldn’t breathe. “You had the wind knocked out of you,” Marni said. Right, yes! That. It had been a while since something like that had happened to me. Basketball, maybe, or soccer. When I was younger. I couldn’t breathe and my back hurt and my knee was gashed and bleeding and the bus was stopped. I felt like we were stopped forever and everybody kept talking to me about going to the hospital. I kept saying, “I don’t have health insurance.” I wasn’t the only person who got hurt, but I got hurt the worst so there was a lot of attention on me which was scary, and then everybody got off the bus.

The bus driver’s supervisor was there, and the police, and they wanted me to sign something to say I didn’t need medical attention, but I wanted to go see the beach where the plane crashed in the pilot of LOST!! I could sit still but otherwise my torso was out of commission — no turning, no lifting, no lying down, no opening doors, no stretching. There was a dent in my back from where it hit the stairs. I think I cried a little.

After we pretended to sign a document excusing the bus company from liability in case I didn’t get better within a week, we were shuffled onto a new bus and an hour later, we were finally in our rental car. I WOULD NOT LET PAIN GET THE BEST OF ME.

From the airport it was maybe thirty minutes up to the top of the island. We drove through rainy bits and sunny bits, and when we got closer to our first destination we started passing groups of people our age or maybe younger in crazy costumes, caked in mud, some with numbers on their backs, walking to or from cars. It was The Warrior Dash. 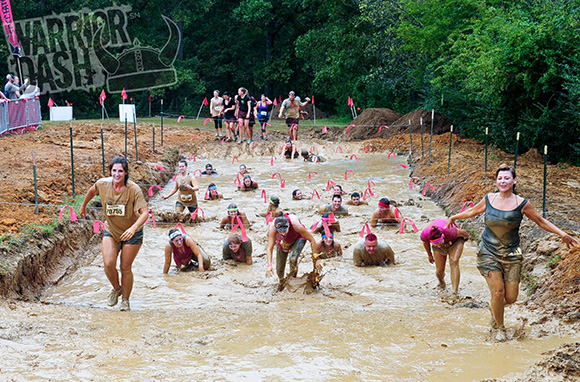 The whole drive was so beautiful, even the intermittent patches of rain. We then got to the vegetarian lunch spot I’d picked out, The Beet Box (66-443 Kamehameha Hwy // Haleiwa, HI 96712), which is tucked away in the back of a natural foods store, with an open kitchen and a few small occupied tables. 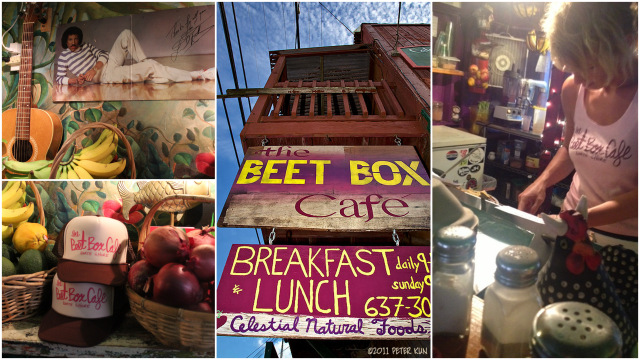 Beet Box Cafe exterior photo in the middle via thebeetboxcafe.com

The rain started hitting hard the moment we got inside, but we ordered our smoothies and lunches to go and  drove to Mokule’ia Beach (Waialua, HI 96791), where Oceanic Flight 815 crashed all those years ago! I was super excited to find a comfortable sitting position (impossible) and consume my Mexicali Blues (“eggs scrambled with a crunchy, toasted sprouted corn tortilla and jalapeno jack cheese topped with our homemade salsa & avocado, served with brown rice & brazilian black beans”) (successful.) 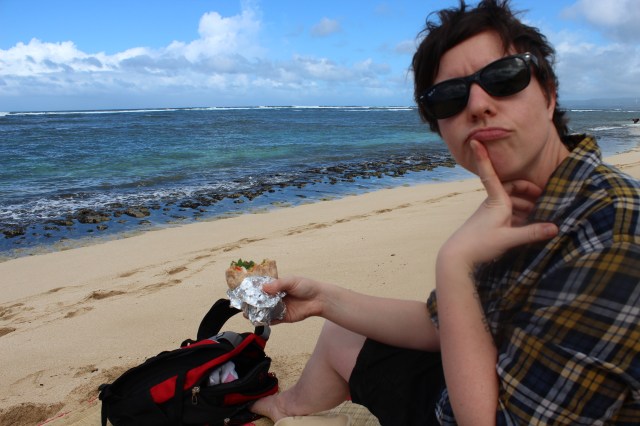 It was rocky that day, just some windsurfers and a few families, nobody was really swimming, but we found a place to sit and eat and be peaceful even though I was still in excruciating pain. But if there’s anywhere to be when you feel like that, it’s exactly where we were. 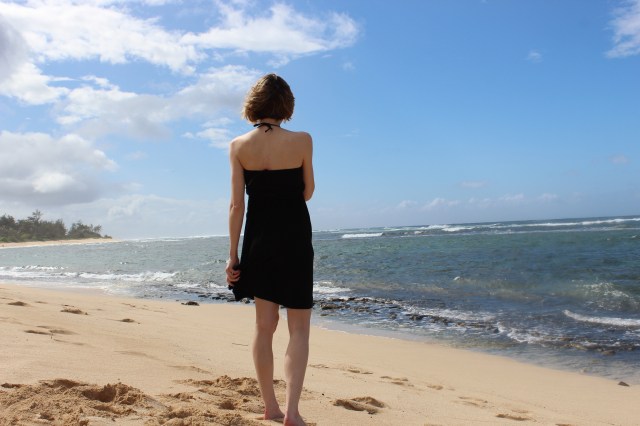 From there we drove the perimeter of the island, stopping first at Walgreen’s to stock up on ibuprofen and then cruising the beautiful coastline from the Kamehameha Highway past all the beaches before finally settling on Sunset Beach (North Shore) to lie down for a bit before the sun set. We even saw a rainbow! 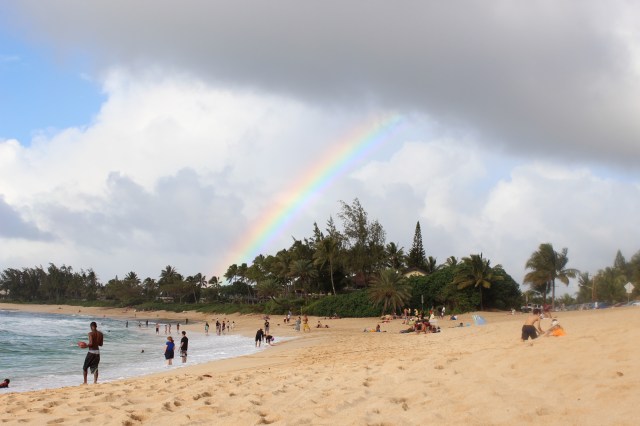 It started pouring down hard as we drove back to Waikiki — we had actual dinner reservations at Roy’s 38, another recommendation from Marni’s colleagues and TripAdvisor. Even though I’d almost died that morning, it was my favorite day in Hawaii because we saw so many beautiful places. It was just us in our little car on a two-lane road, listening to classic rock radio, driving past the gorgeous and breathtaking and cinematic Kawailoa Forest Reserve, the shoreline blocked off by the tony Turtle Bay resort at the north tip of the Island, and the Kahana Valley State Park on our way back down the other side of the island.

Especially far away from the intense commercialism of Waikiki, there is something ridiculously magical about this place, this island, like it’s not even fair for something to be as beautiful as this. Like why doesn’t everybody live in Hawaii. 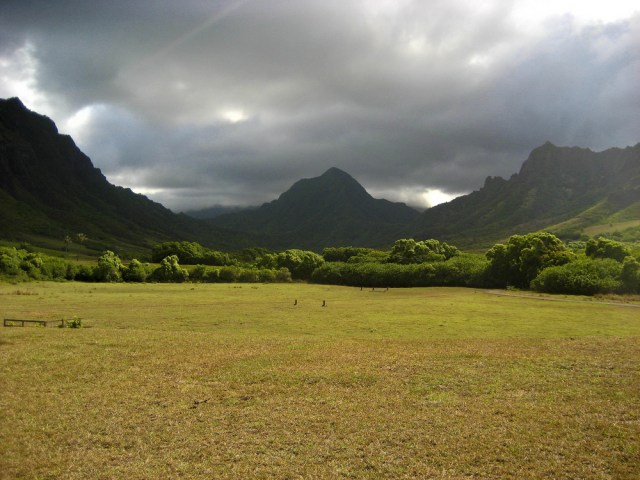 As aforementioned, dinner was at Roy’s 38 (226 Lewers St), conveniently located right across the street from our hotel. Roy’s was the end of the line for our bank cards and her meal allowance. I had scallops and Marni had like four different kinds of fish. It was tasty with nice ambiance but also definitely overpriced. 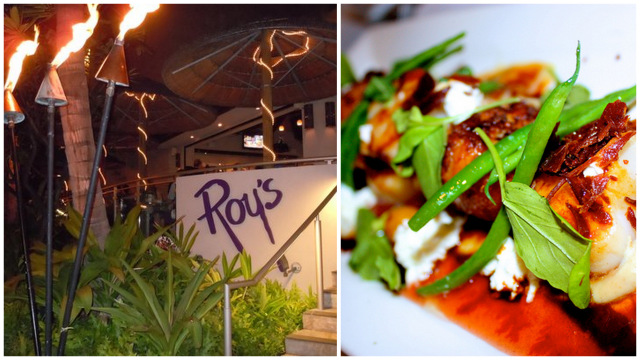 left photo of Roy’s exterior by Doug A on yelp, right photo of scallops by Alvin K Clee via flickr

When I told my team back home via e-mail about the bus accident, Alex wisely stated: “I’m convinced that someone is trying to off you.” This is a valid theory considering Palm Springs and all those other times. I suspect Ilene Chaiken.