Stone Mountain is located in Stone Mountain Park, 3,200 acres of forest speckled with outdoor attractions, dining, shopping, and even golf. Amidst all this natural beauty is the highest relief sculpture in the world: the Confederate Memorial Carving. Towering four hundred feet above the ground ride three Confederate figures on horseback, President Jefferson Davis and Generals Robert E. Lee and Thomas “Stonewall” Jackson. The carving of these Southern Civil War leaders began in 1915, spearhead by the United Daughters of the Confederacy (UDC). That same year, the then defunct Ku Klux Klan proclaimed its modern rebirth with a cross burning at the summit of Stone Mountain. But it would take decades of work before UDC’s vision became Georgia’s unfortunate reality. Even when the park officially opened to the public on April 14, 1965 — the hundredth anniversary of the assassination of Abraham Lincoln — its anti-Civil Rights centerpiece was incomplete. Two years after the 1968 publication of “The Confederacy Rides Again—In Granite” in the Atlanta Journal-Constitution, 10,000 visitors attended the memorial’s dedication on May 9, 1970. 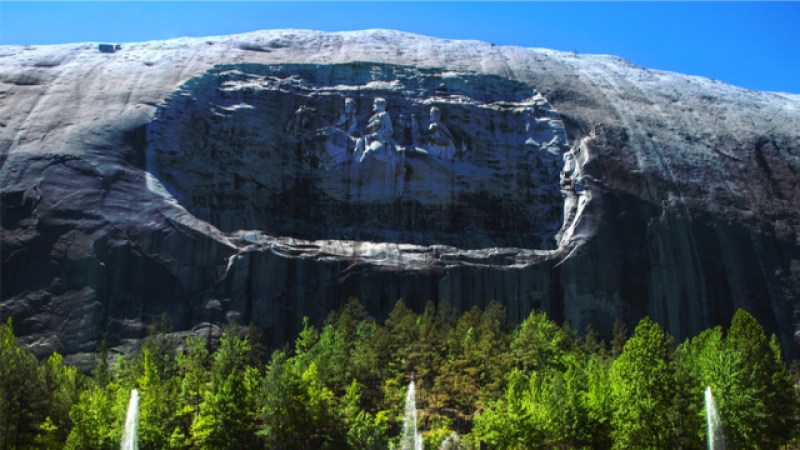 Today, the largest Confederate monument in the world is a homing beacon for modern Ku Klux Klan activities; for over fifty years it was the location for an annual Labor Day cross-burning ceremony, all in the name of hate and white supremacy. In 2016 the mountain and its sacred history to second and third national Klansmen drew a number of Confederate flag welding radicals for a white power event. As recently as last year, Klan organizers were planning a pro-white rally known as “Rock Stone Mountain II,” but were denied a permit by local authorities who cited the event as a “clear and present danger” to public safety. Despite the breadth of news articles and opinion pieces, this monumental dilemma remains protected by state law — in 1958 the state of Georgia bought the dome monadnock and all the surrounding land. Post the Charleston church shooting in 2015 there emerged a nationalwide movement to remove monuments, flags, statues, and public works that pay homage to the confederacy. Yet, the Confederate carving on Stone Mountain remains unaltered.

I knew none of this when I agreed to go to Stone Mountain Park. I was just a recently transplanted northerner working in the south looking to celebrate the Fourth of July with a backyard barbeque, like any good American. And yet there I was, at the suggestion and accompaniment of a friend, staring at an Americana mosh-pit. Necklaces and toys intermittently glowed red, white, and blue: a constellation of stars and stripes pulsating on earth. Families on red and white picnic blankets strained against the humidity, excessive body heat, and restless that comes from waiting.

After a brief welcome and service announcement The Star-Spangled Banner began to play. We all rose to the overwhelming sound of the national anthem, the lyrics filling the space between us and the rock face. Supposedly the Fantastic Fourth Celebration at Stone Mountain, is an epic firework display with state-of-the-art visual effects. Though to be honest, I can’t recall the actual show itself. I know from YouTube and conversations with past attendees that the ending is Elvis’ “American trilogy.” That at the moment when the pyrotechnics can’t get any more mind-numbing “Dixie” also known as “Dixieland” or “I wish I was in Dixie” — the best-known song to come out of blackface minstrelsy — animates the men on horseback.

I don’t clearly remember this macabre display of revisionist history because at one some point in that patriotic experience my friend began to get restless. During the National Anthem, as we shifted from one swollen foot to the other, my friend leaned in to ask if I thought this was an extended version. Just then, in the midst of shrugging my shoulders, I heard, “What, were you expecting it to be sung in Spanish?”

I wish I could tell you he was white. That he wore red, white, and blue, starting from the vizor of his MAGA hat down to the confederate belt buckle looped through his denim jeans. That’s the image we want to see when we think of racism; it’s the snapshot of a person that we can compartmentalize and file away under white supremacy, fascist patriarchy, and “to be avoided.” But he wasn’t white, and his clothing was innocuous. And yet, maybe we should have been more cautious. How were we to know that we were being watched? At what point should we have realized our conversation was being listened to? What was it about a question exchanged between two friends, that gave him the right to make us feel unwanted? There he stood surrounded by his family, all of them girls, just like us, only younger and with darker skin. “What, were you expecting it to be sung in Spanish?”

That question, despite the heat, caused the hairs on my forearms to rise. Could I have misheard? It rang ceaselessly in my ears, echoed on. It bounded off the faces of President Davis and Generals Lee and Jackson to come back and hit me squarely in my colored stomach. I didn’t know a microaggression could have such a bodily impact. An almost gelatinous weight, not unlike the patriotic Jell-O molds surrounding me. It gathered in the pit of my stomach and made me acutely aware of the space my body was taking up — my presence in relation to my location.

This was a dangerous place. I absorbed the realization from the ground up; the baseness of the mountain and all it commemorated sucked up into my Fourth of July flipflops. I wanted to kick them off, to run along Stonewall Jackson Drive as fast as I could and leave that Southern experience behind me. But I didn’t run, and every Fourth of July I see that towering monument, I hear the bitter question, “What, were you expecting it to be sung in Spanish?”

I don’t live in the South anymore. My relocation is not in direct correlation to my experience at Stone Mountain, but I would be lying if I said I didn’t rejoice at the distance put between me and the sweet tea States by my new appointment. As for my experience, there are always people of color who can relate, who have a similar story of their own. In fact, many said, “Well, that’s to be expected.”

There was that word again: Expect.

“What, were you expecting it to be sung in Spanish?”

“Well, that’s to be expected.”

“You went to Stone Mountain, did you really expect anything different?”

Yes, I did. Internalized white supremacy cannot and should not be expected as a fact of life, nationally memorialized, and played to the tune of The Star-Spangled Banner.

Alyssa Velazquez is the Curatorial Assistant of decorative arts and design at the Carnegie Museum of Art. She holds a MFA from the Bard Graduate Center: Decorative Arts, Design History, and Material Culture, and a BA from Washington College in Chestertown, Maryland.

Alyssa has written 1 article for us.