Today I leave the UK, a country (of countries) that I’ve grown into for the past three years. There are many things I love about the UK — and my city, London, especially — but I can’t say British food ranks particularly high among them. I was deeply baffled when confronted with my first (vegetarian) toad in the hole while living in catered student halls and I die a little inside every time someone travels from half the world away only to insist on their fill of “traditional fish and chips,” which they inevitably never finish, because one has only so much tolerance for grease and blandness.

Desserts, though. If it’s something this country does right in the culinary department, it’s Nigella Lawson. And then cake.

While visiting from Singapore over the past couple of weeks, my partner Natalie worked up in the kitchen a whole bunch of tastes that I’m likely to miss when I leave (even though she’d never tried most of them before) in an attempt to stop me making sad faces at the cat I’m leaving behind. Has it worked? No, not really, for said cat is still curled up on my lap and I’m pausing every couple of minutes to look at her perfect, tiny, fluffy face. Has it been delicious anyway? Yes, yes of course it has. 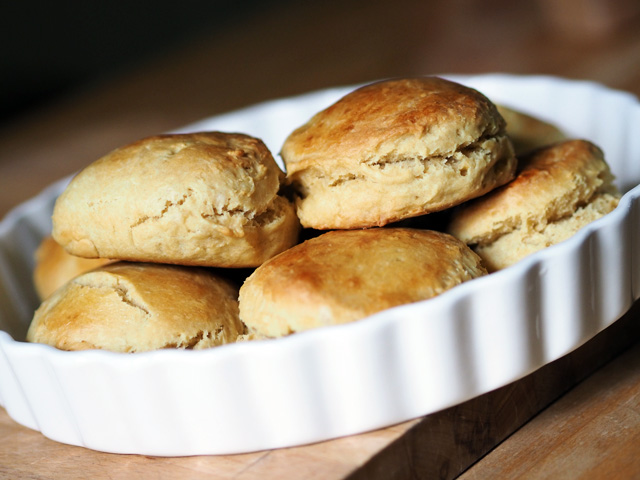 Scones are my idea of a perfect cake/pastry/dessert situation, but I don’t think I’ve ever quite gotten a satisfactory answer to “but what are they?” Unlike Jaffa Cakes, which are definitively designated cakes for tax purposes, scones are a rather ambiguously categorised teatime food. And that’s even before you try to wrap your head around how you’re actually supposed to eat them. When I first moved to the UK, I conducted a brief online poll of my British friends consisting of questions like:

Their answers were as varied as the River Thames is wide — that is to say, not very, but enough to work up a fair bit of commotion if you walk across the Waterloo Bridge quickly. Like just about everything else in the UK, how you enjoy your scones (scohns?) varies according to region, class, personal preference, and what your local Marks & Spencer had in stock that day.

I don’t know very many people who make scones from scratch, but now you can! According to this very important piece of investigative journalism by Felicity Cloake at The Guardian, the tricks to perfect scones are:

Our scones (pictured above) were delicious but didn’t rise as much as we’d hoped, possibly because we only realised the oven wasn’t working just as we were about to put them in so they were stored in the fridge for the afternoon and then later carried by hand, uncovered, to a friend’s place half an hour away. (There is no reason to specify that they were uncovered except to highlight my lack of common sense and to perhaps suggest that the secret ingredient is a fair amount of exposure to London’s air pollution.) So what we’ve learnt is that you don’t have to worry too much: the article makes the process sound really intimidating, but the dough is hardier than you’d think.

And check that your g*ddamn oven is working. 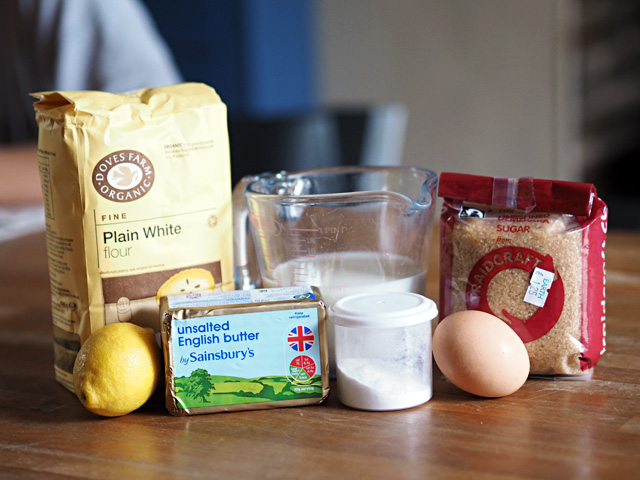 (* The original recipe calls for 2 heaped tsp cream of tartar. We used lemon juice as a substitute to act as an acid to react with the alkaline baking soda. We also used some to sour the milk in place of buttermilk.)

Chop the butter into small pieces. (If your hands are very warm, coat your fingers in a bit of flour.) Sift the flour, baking soda and salt into a large bowl. Using your fingertips, rub in the butter until the mixture resembles breadcrumbs. Repeatedly ignore your girlfriend’s requests to “hold still for a second so I can take a picture.” Add the sugar and mix well. 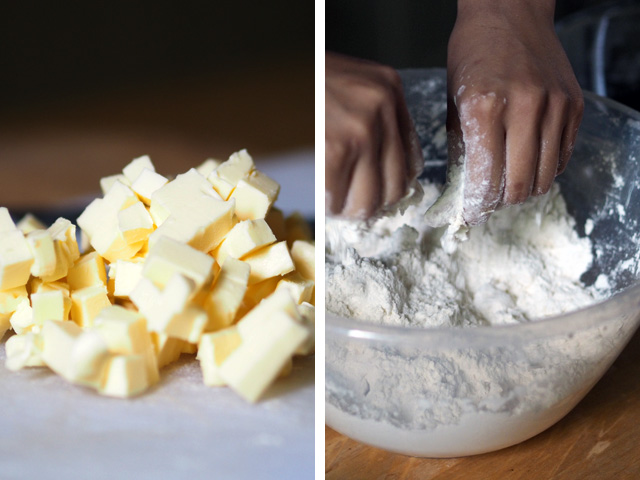 Add the lemon juice to the milk. Set aside about a third of the beaten egg and combine the rest with the milk, then add to the flour mixture and mix briefly to combine into a moist dough. Place on a lightly floured work surface and knead ever so slightly to bring together, then press or roll out to a thickness of 2-3cm.

Using a 6cm round cutter (or an old soup can, which is all we had lying around), cut out the scones and place on a floured baking tray. 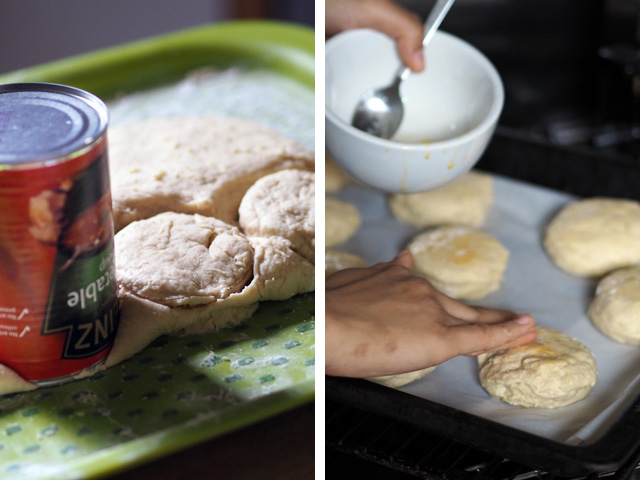 Add about a teaspoon or so of milk to the remainder of the beaten egg to make an egg wash. Brush the scones with the egg wash and bake in the oven for 10-12 minutes or until golden brown on top.

BONUS TIP: If your oven is not working, do not microwave them. It is not as good an idea as it sounds in your head, the kitchen will smell terrible for hours and you’ll never live it down. JUST DON’T DO IT. 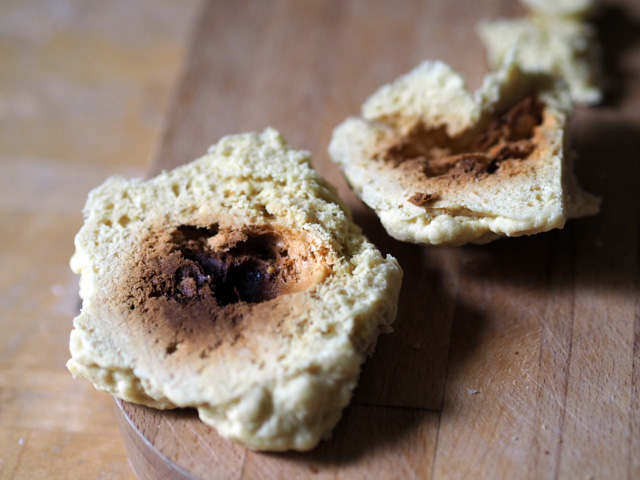 Serve while hot with clotted cream (or butter if you can’t find it) and jam. 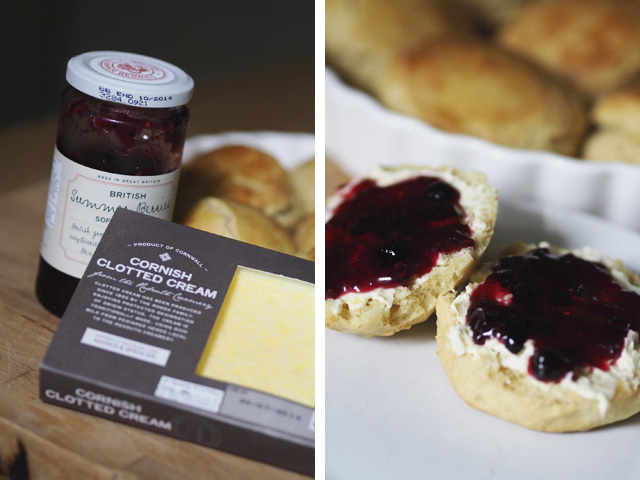 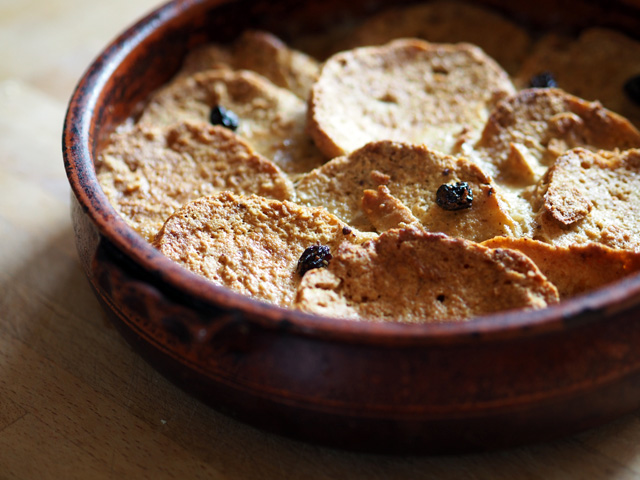 When you make both a batch of scones and an impromptu birthday cake in a day, you’re bound to have leftovers a few days later. Eat the birthday cake, because birthday cake is delicious. Cream tea is also delicious, but anyone who’s been to Cornwall for more than three hours can tell you that there’s only so much clotted cream a human body is capable of consuming.

I first had scone and butter pudding (instead of the more traditional bread-based variety) at Cafe Concerto in York, a restaurant that was, coincidentally, recommended to me by a Straddler I’d met at London Pride just the day before. And it blew my mind. Two of my favourite desserts! In one! And then I went on about it enough until Natalie resigned herself to making it for me, because she is the best.

(* We used a mix of hazelnut and almond milk in place of dairy, and while the end result tasted lovely, the texture was grainy, a little like curdled cream.)

Combine the dried fruit and whisky (we used fruit juice instead) in a bowl. Ideally, cover and set aside to plump and soak for 2 hours, but nobody has time for that so we just microwaved it for a bit. (We also didn’t use half as much dried fruit as the recipe calls for — we just picked out raisins from granola, which most people later picked out from the pudding anyway.)

Slice off the tops of the scones and then slice each one into three rounds. Butter each slice of scone then layer with the fruit in a buttered dish. 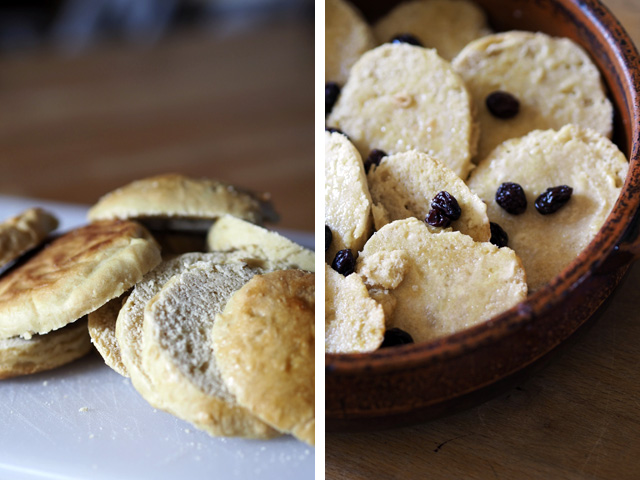 Pour in the egg and cream mix then cover and set aside for 1 hour. (Again, we didn’t really bother with this. If you do, your scones should soak up most of the liquid, so reserve some liquid to pour in before baking.)

Bake for 40 minutes, or until slightly risen and golden brown on top. 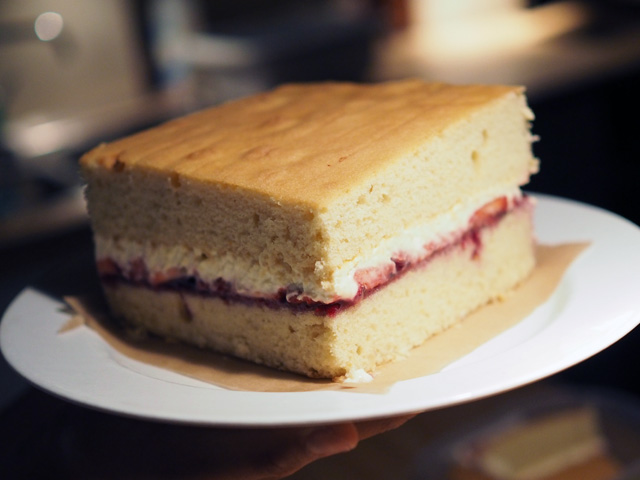 Here’s a fun(?) fact about Queen Victoria, the great-grandmother of Queen Elizabeth and the monarch after whom this dessert is named: she was the one who gave Royal Assent to Britain’s anti-gay law criminalising sex between men — but not women. (This law was only repealed in 1967, and is still modelled in the Penal Codes of many Commonwealth countries – including the one I’m flying home to — today. Yeah, you really can’t write anything about Britain without finding yourself standing in the shadow of its colonial legacy.) There’s an urban myth that women were excluded from the legislation because Queen Victoria couldn’t possibly imagine women doing such obscene things, but it’s probably just that: an urban myth. Still makes a good story though.

Monarchy and Victorian morality aside, this is a damn good cake and the last of my favourite British desserts. When I was in New York for just three weeks a couple of years ago, Natalie brought me to Tea & Sympathy to satisfy my cravings for it because that’s how much I love this cake, you guys. (It wasn’t great tbh, but can you really resist a shop called Tea & Sympathy?) 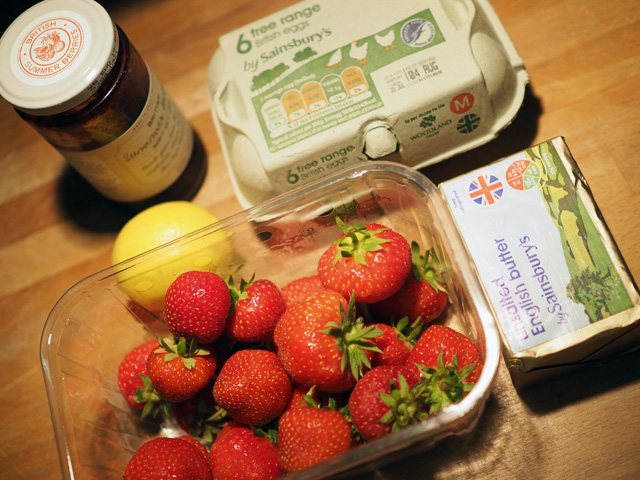 Grease the bottom and sides of two 20cm sandwich cake tins with butter. (We just used one large rectangular cake tin and later cut it into half to make two layers, because that’s all we had and I like sharp corners.) Line the base of each tin with greaseproof paper, then dust the sides lightly with flour.

Beat the butter and sugar together with a wooden spoon until very light and fluffy. Ideally you’d use a food processor or mixer, but Natalie didn’t know I had one and is super sexy working with her hands anyway (not pictured, sorry). Make bad jokes about beating the butter into submission. Add the eggs one at a time, beating each one in well before you add the next. 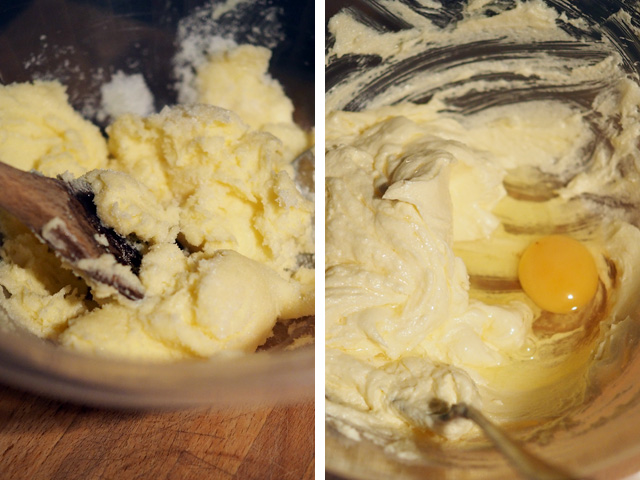 Sift in the flour, mixing every once in a while to incorporate. Finely grate the lemon then fold the zest into the mixture.

Spread the cake mix in the tin(s) using and even it out with an offset spatula, or whatever you have on hand. Resist excessively smoothing the top. Lining the kitchen counter with a tea towel or something, rap the tin(s) firmly a few times to knock out any large air pockets. 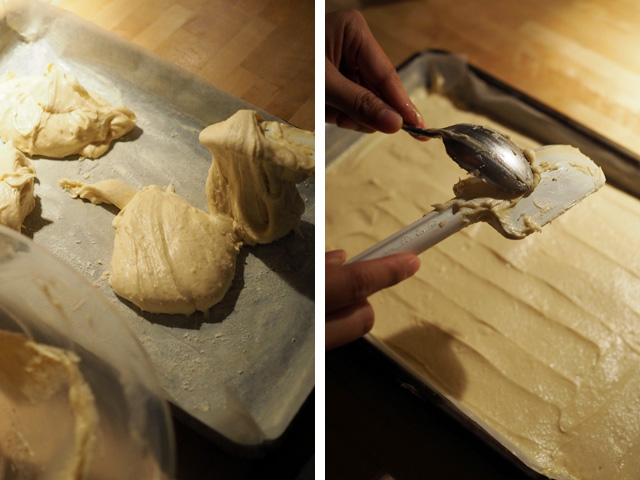 Bake for around 20 minutes, or until lightly golden brown and risen. Check to see if the cake is cooked by sticking a skewer into the middle. If it comes out clean the cake’s cooked; if slightly sticky, it needs a bit longer.

Allow the cakes to cool slightly in the tins, then carefully turn them out on a rack to cool completely. 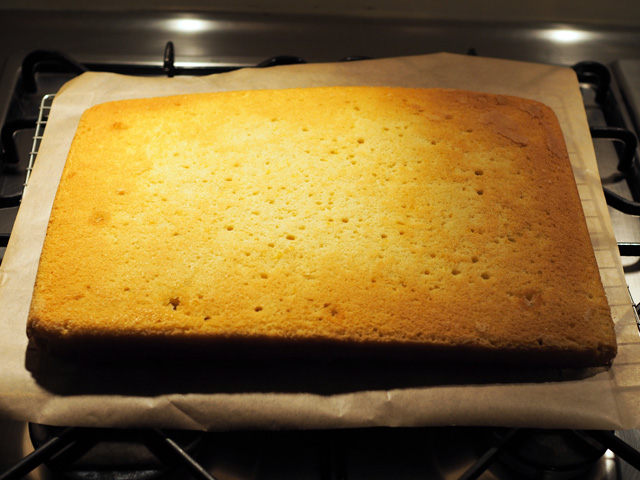 Our cake turned out slightly bubbly and uneven because we messed up the raising agents — we didn’t have self-raising flour, so we used plain flour with baking powder and soda (by accident), so by the end of it we weren’t 100% sure what went in it. BUT it goes to show that you can mess things up and still make delicious cake.

Slice the strawberries. Add the cream to a bowl with the sugar, and squeeze in the juice from the zested lemon. Whip until you have soft peaks. Make more bad kinky jokes about your credentials as a top.

The original recipe calls for a complicated process involving a vanilla pod and warmed jam (that does not sound fun to wash up), but we opted to just layer the jam, strawberries, then cream. 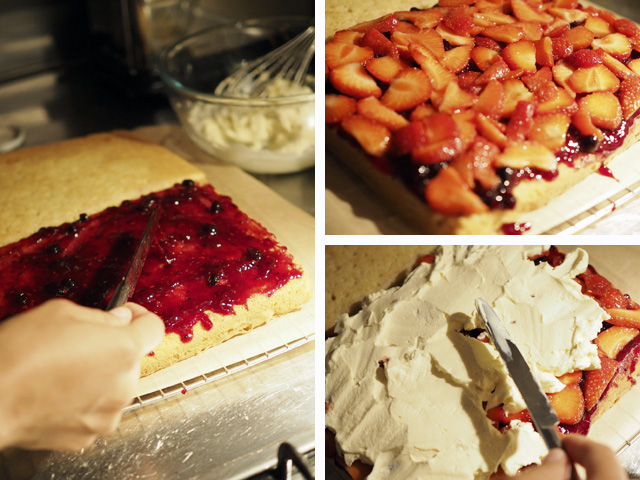 Place the second (half of the) layer on top, like a sandwich. Cut off the edges for a neater finish (as I prefer) or leave it as it is so the cream and jam drips off the side (as Natalie prefers). Dust with icing sugar, if you’d like.

PUT IT IN YOUR FACE. Cake keeps, covered and chilled, for three days-ish.

Join A+
Related:Britainget baked with autostraddle