With the upcoming opening of the George W. Bush Presidential Library and Museum looming, suddenly the 43rd President of the United States is back in the news again, after years of avoiding the limelight. People — or at least, his fellow Republicans — are caring again what the previous president thinks about the issues of the current day. In a recent interview with CBS to promote the new library, he shed light on what he thought of these issues, along with his current activities such as painting.

One thing that Bush definitely doesn’t want to talk about, though, is the current same-sex marriage debate. With DOMA and Prop 8 seemingly on their last legs, and numerous states legalizing same-sex marriage within their own borders, one might be curious what the former president thought. After all, he made opposition to marriage equality a key part of his platform, and it helped to get out the evangelical vote – one of the big demographics that helped re-elect him in 2004 – when so many states had gay marriage bans proposed in 2004. Bush also made his feelings on the issue a clear part of his fourth State of the Union address, saying “If judges insist on forcing their arbitrary will upon the people, the only alternative left to the people would be the constitutional process. Our nation must defend the sanctity of marriage.” 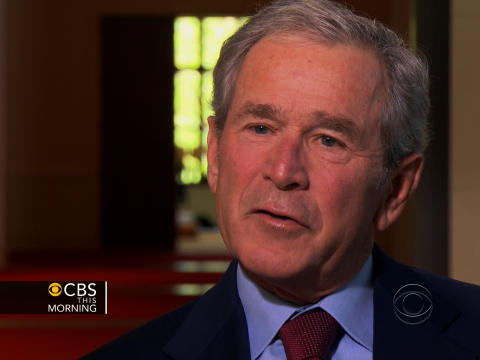 Of course, times and attitudes about LGBTQ rights, and specifically marriage equality, have changed dramatically in the past decade or so, and Bush’s views aren’t the majority anymore. Which may be part of the reason he’s declining to comment on same-sex marriage in his recent interviews, despite insistence that he do so. According to The Raw Story:

During an interview to promote the opening of the George W. Bush Presidential Library and Museum, CBS News host Charlie Rose asked the former president if he still favored a constitutional amendment banning same sex marriage.
“Yeah, well, I’m not, I’m not weighing in on these issues, as you know, because I’ve made the decision to get off the stage,” Bush insisted. “And so I’m off the stage.”

It’s easy to buy Bush’s “decision to get off the stage” excuse at first, especially since that’s been his pattern throughout the last few years, not appearing at party events (despite his supporters’ attempts to re-write his legacy in more flattering terms) and mostly just sticking to his ranch in Texas. It’s hard to think of a time in the past four years when Bush’s opinions about politics have come up, other than regarding his supposed “feud” with Gov. Rick Perry during the latter’s presidential run.

Yet, Bush did decide, in the CBS interview, to speak up on some other political issues where his opinions are more popular – namely, on immigration reform. It’s easy to forget now, in the era of a Republican Party that has become increasingly unfriendly to Latino/a Americans, but Bush actually had significant support among Hispanic voters – and one of the projects he championed was immigration reform. When asked about that in his interview, he was actually eager to announce his continuing support for it: 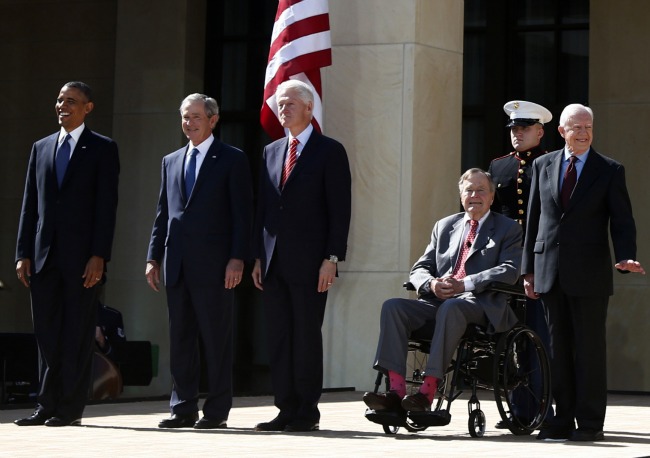 All five living presidents at the opening of the George W. Bush Presidential Library via The Atlantic

Of course, even that statement is fairly vague, and could easily lend support to either side of the immigration debate; opponents of efforts like the DREAM Act want “reforms,” too, just different kinds of them. It’s clear that Bush doesn’t want to truly step back in the limelight and, as he put it, “undermine our current president” by speaking out – a move that, depending on your image of the man, could be seen as classy or underhanded (in terms of realizing that taking too public of a stance will damage the current GOP because of Bush’s stained legacy). If it’s the second, it’s fairly ironic in terms of the work current Republicans have put into trying to rehabilitate what the public thinks of Bush, and to cast his legacy in a flattering light – an effort that could be seen as successful as Bush’s approval ratings have improved since he left office, currently matching Obama’s according to a recent Washington Post/ABC poll.

The fact is, though, that while Bush does seem generally more interested in removing himself from the current political discourse, leaving that duty to current politicians, there are some issues on which he will speak his mind. But same-sex marriage isn’t one of them. Perhaps it’s because he knows that his opinions just aren’t the ones the American people want to hear anymore. Polls show that most Americans support marriage equality, making it yet another issue where it’s clear the public has moved beyond the former president.