The weirdest thing about having a face is how many faces you have in a lifetime. I used to look just like my dad, and then just like my mom, and then like my dad again, and then my mom. At one point, the top of my face looked like my dad and the bottom of my face looked like my mom, and then that flipped like a Potato Head. Right now, I look like my grandpa, my dad’s dad, except for in profile. In profile, I look like my great-grandmother. Who knows who I’ll look like a year from now. The only thing more bizarre than genetics is time, which is what Carrie’s dealing with on And Just Like That, this week. In fact, it’s what everyone’s dealing with. The way time changes everything and nothing, and how we experience it linearly and backwards and all at once. Like grief. Carrie even gets the chance to erase time. Renowned plastic surgeon Dr. Jonathan Groff says he can magic away the last fifteen years with the snap of his fingers.

It’s tempting. It’s been three months since Big died, and Carrie knows she has to move on. Literally. She needs to find a new apartment. She sold her and Big’s place because of that haunted Peloton, and she’s had her place since she was 29. She doesn’t want to be one of those New Yorkers who tells anyone who’ll listen that her rent used to be seven dollars a month. She finally “settles” for an enormous place downtown, all river views and endless windows, everything white white white like a blank slate, or a brand new personality. She hates it, and not just because there’s a constant beeping noise that will not go away — but she feels guilty because she’s been dragging Seema around for months and she needs to just pick something. Things go from kinda lonely to crushing when she and Charlotte invade her storage building to look for stuff to put into the new place. She finds one of her most bonkers hats and loves that. A lamp from the 90s and she loves that too. But then she stumbles onto Big’s record collection and has to leave. 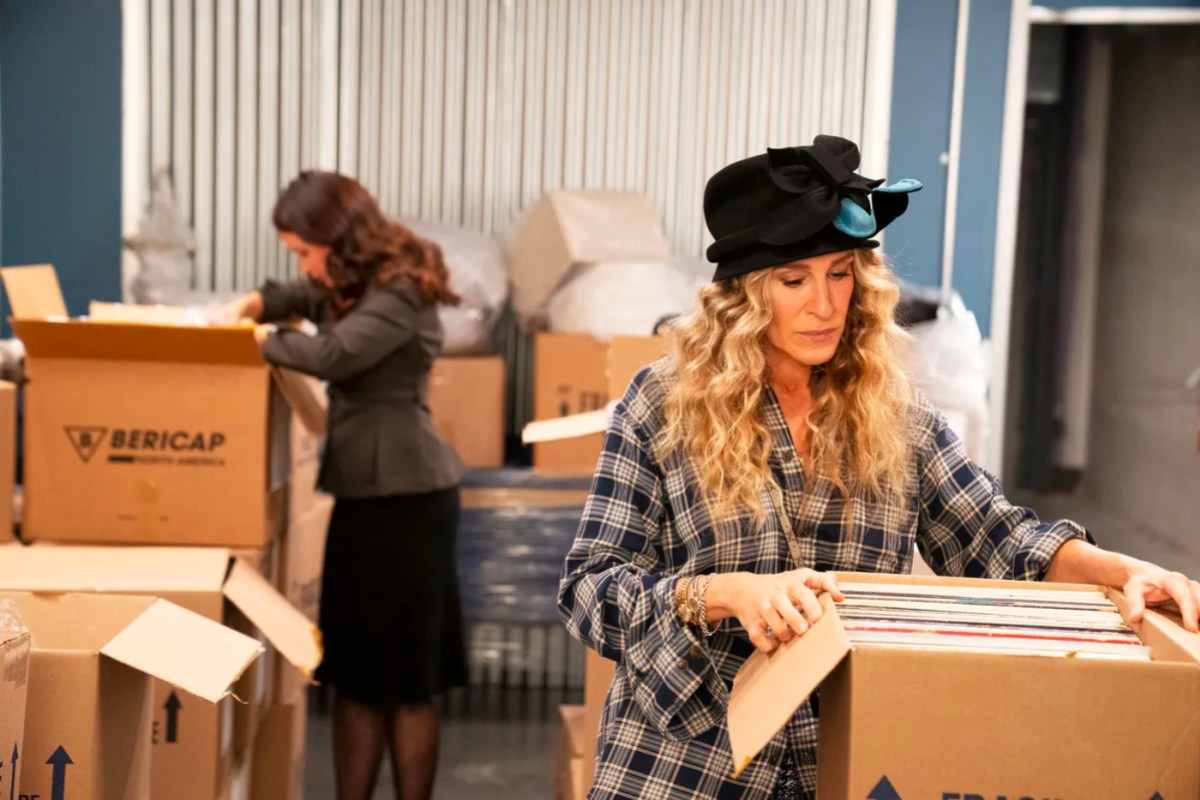 Oh my god, you saved the Post-It note from when Berger broke up with you? Wow. You ever really think about how you dated a guy named BURGER?

She tells Charlotte it sparks sadness, and Charlotte gets it. She, too, is being forced to redecorate against her will because things keep changing. In her case, it’s Rock, who wants to get rid of Charlotte’s antique doll collection, cut their hair, and paint over their old name and the flower mural that’s above their bed. Lily also thinks it’s a good idea due to her mom’s dolls being culturally inappropriate. She tells Charlotte maybe they were fine when she was a kid, but the world has changed, and Charlotte’s gotta change with it. She doesn’t want to become an antique doll herself, does she? Honestly, maybe she does! She has the life she’s always dreamed of, and this is the first time she’s had to grapple with the fact that you don’t get to dream lives for your kids too. They’re their own main characters, and you’ve just gotta hope you’re giving them the love and life skills they need to live their own happy story (and also that you don’t become the antagonist in their grown-up therapy). Rock says this all very matter-of-factly. They know what they want, they know who they are, and that’s that. Lily’s obviously on-board.

Across town, Miranda seems to continue wishing that she never gave birth. The live-in teenage girlfriend! The endless laundry! The fact that her son won’t stop pestering her when she’s just trying to masturbate while thinking about Che, again, for like the millionth time. “Is it menopause, do you think, or is it my compulsive personality?” she asks Charlotte and Carrie during a picnic, where she finally confesses to Charlotte that she had sex with Che. She tells Charlotte not to have a big reaction, but Charlotte has no idea what a subtle reaction would even look like, and starts firing off judgment and endless questions. Is this AN AFFAIR? Is Miranda GAY NOW? Is Miranda even PROGRESSIVE ENOUGH for this? Why can’t she just DYE HER HAIR like a normal person? Or GET A FACE LIFT like Carrie? It’s not like Charlotte hasn’t also had SEX DREAMS about Che on A FERRY!!!! WHY CAN’T THINGS JUST STAY THE SAME! 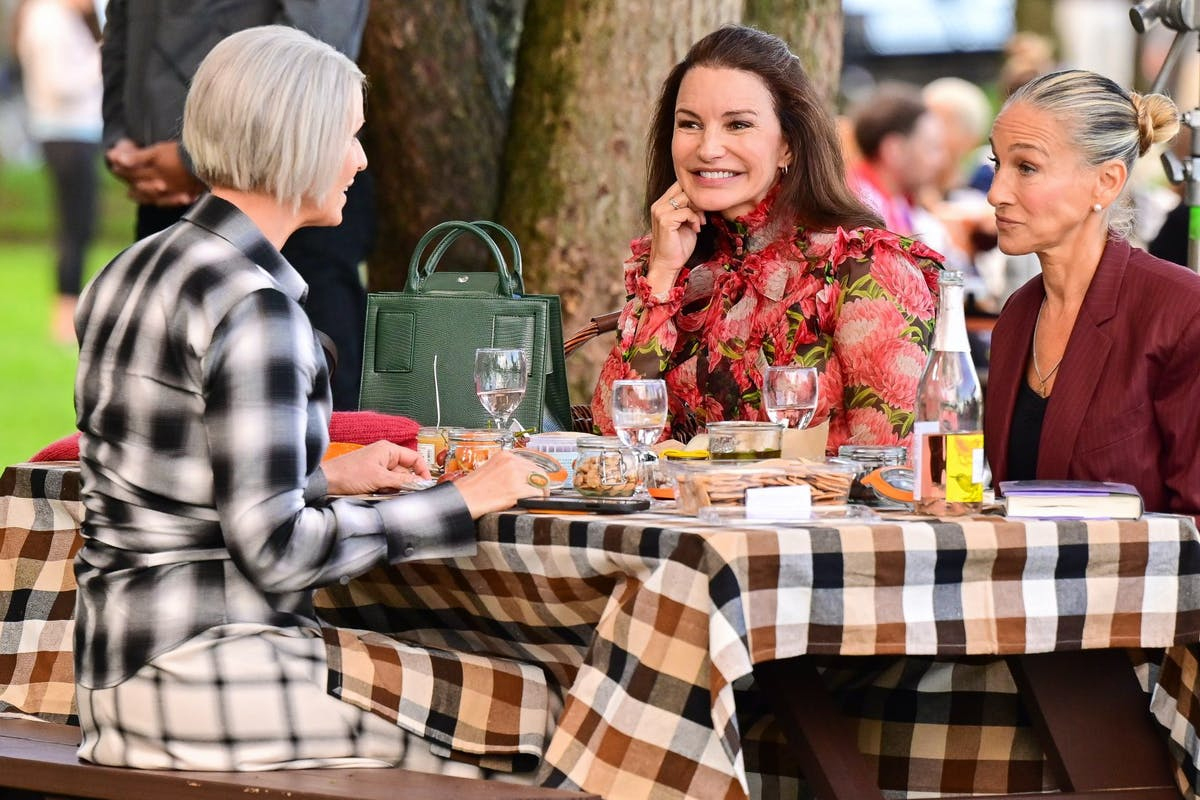 Elsewhere, at other meals, you’re not even going to believe this but four entire Black characters are having dinner together. Two Black couples! Black couples who have Black friends! What a world! The character development of Dr. Nya Wallace isn’t what I had hoped it would be at the beginning of the series; she’s still a side-character in Miranda’s show, but at least we’re getting to see the show she actually stars in this week? And she has hot sex with her hot husband, which brings the total sex count on this show to two: One queer time and one time with two POC characters. THAT is a drastic improvement over the original series, which never prioritized the pleasure of people who weren’t cis, straight, and white.

Nya loves having sex with her husband; she’s just not sure at this point if she wants that sex to lead to babies. At the very least, she doesn’t know if she wants to go through IVF again — no matter how many kids Fertile Myrtle and her husband have, or how many times they insist Nya and her husband need to have kids too. These two, the Pope, what a week of bossing around people who don’t have kids! I’m not sure if the person Nya should be taking advice from is Miranda; or, at the very least, Miranda’s advice should come with a disclaimer that she’s blowing up her own life right now in the hopes that she can sift some authenticity from the rubble. 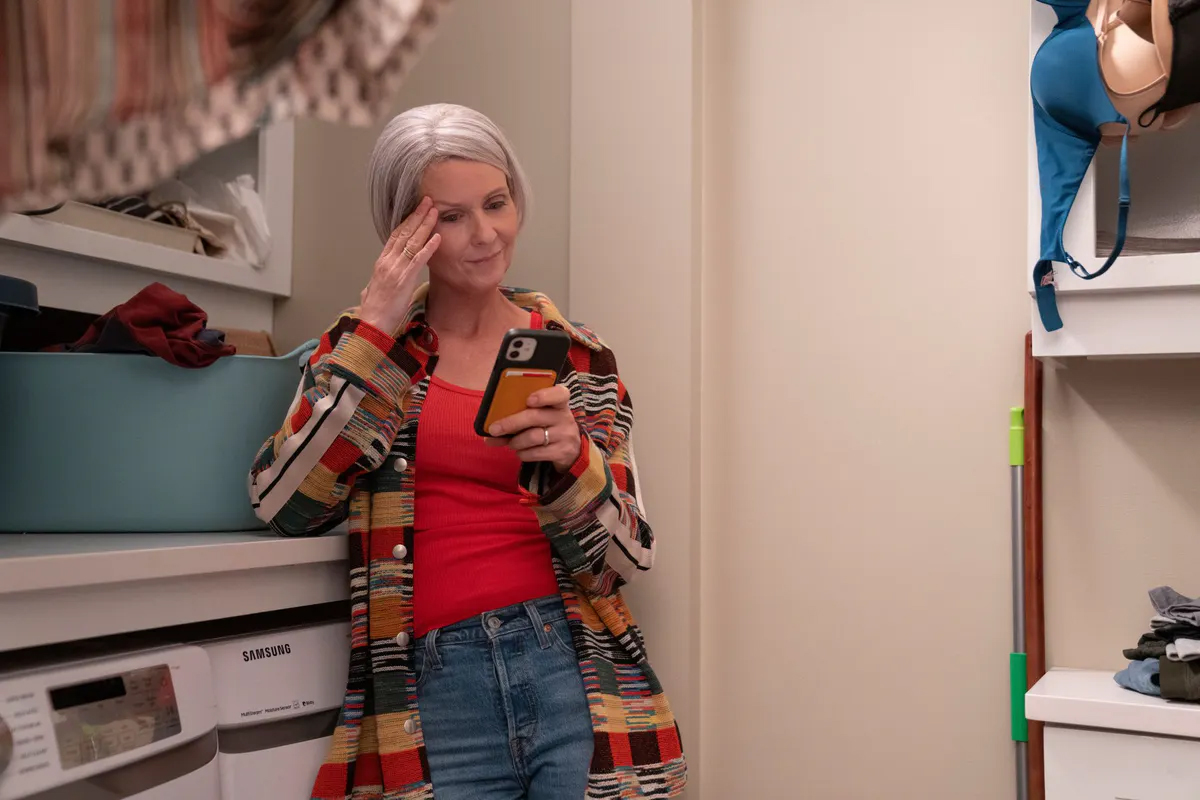 Why did they reply with a scissor emoji? Do they want to do arts and crafts together?

At the end of the episode, while she’s folding laundry and mumbling about “stupid Brady… goddamn Steve…” she DMs Che to hang out again. At the very least, she needs something else for the wank bank. She’s mentally replaying that one-time kitchen sex against a white backdrop, with like a smoke machine and everything’s echoing, like they’re having sex inside an Assassin’s Creed simulation, over and over and over. 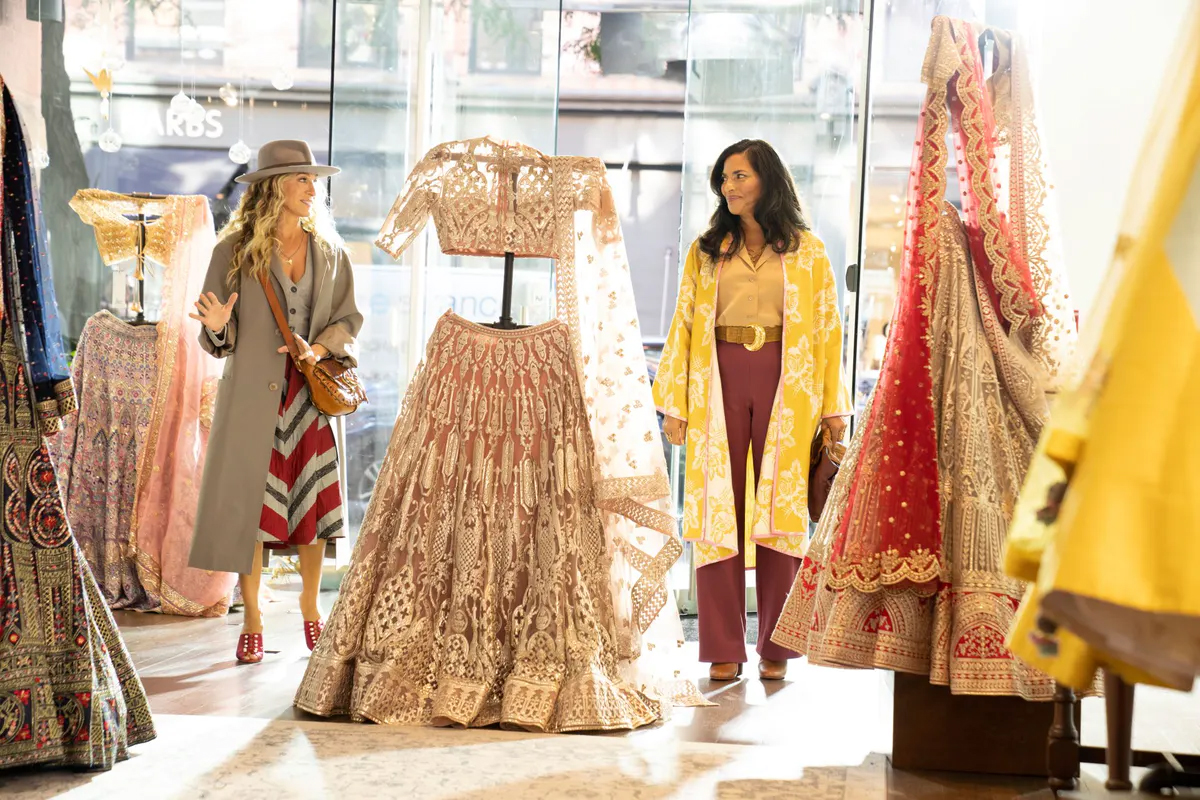 Seema, do you know where to buy “jeans”? Maybe we can go there next? Miranda says I need some “jeans.”

Less dramatic is Carrie’s friendship with Seema, which continues even after she closes on the apartment she hates. She invites herself to Seema’s family’s Diwali celebration, after Seema describes it as “light triumphing over dark,” and learns that Seema has a fake boyfriend named Dennis who works for Doctors Without Borders, because her family doesn’t love the fact that she’s 53 and single. Seema tells Carrie not to worry too much about Dennis; she knows he’s fake, it’s not like she’s hallucinating Dennis when she’s home alone. And also Fake Dennis is white, so her parents are going to be fine when they break up. Seema is so real with Carrie that Carrie gets real back and says she hates the apartment. Seema shrugs and says NBD, they’ll just sell it. Commission is commission after all, and she needs all the money she can get to buy her endless supply of cigarettes because she smokes like a barbecue pit!

Charlotte comes around in the end, like she always does. She gets Rock a great short haircut, lets them hang up a skateboard poster over the hand-painted flower mural, and packs away her terrifying Madame Alexander international doll collection. Luckily, she keeps a set of bright pink box cutters on her at all times. 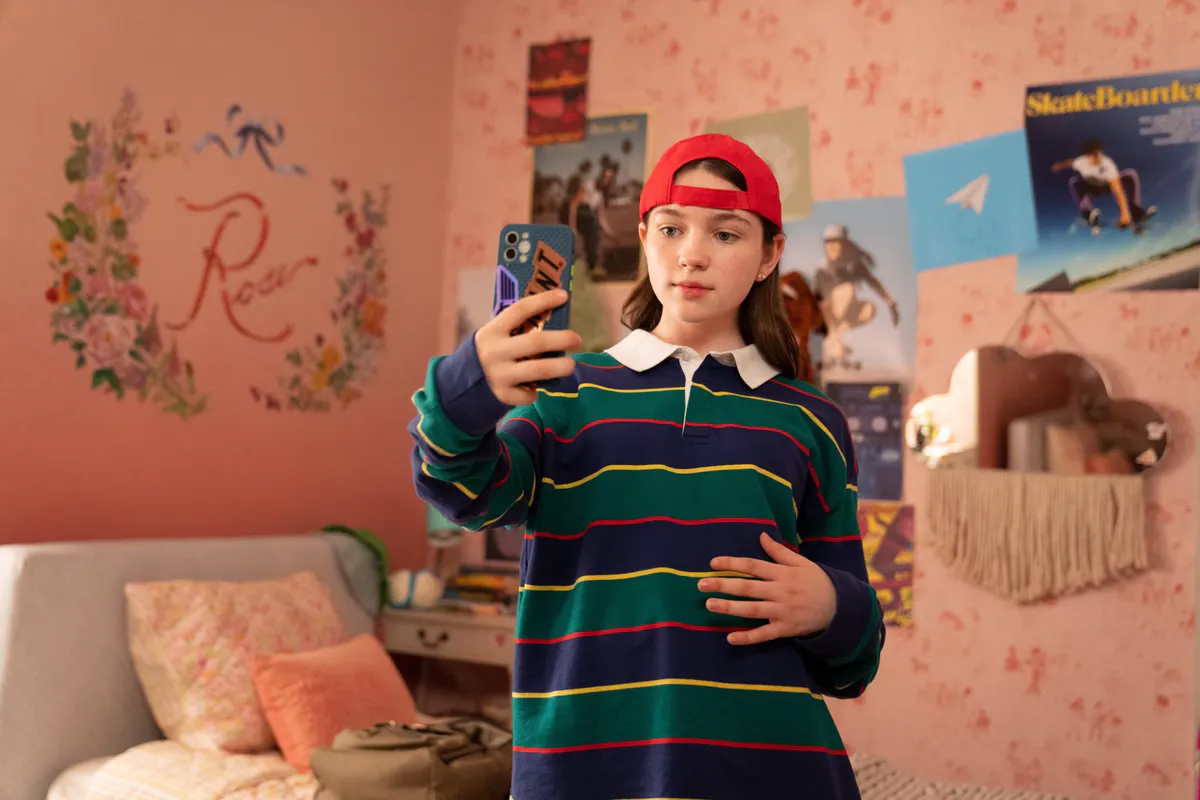 She flipped out about the dolls, and I was like, “Mom, have you even seen Yellowjackets? There are queer teens out here cannibalizing other teens! I just want to hang up my longboard!”

Carrie comes around too. She brings Big’s records home because she loves the records. And she opts out of the facelift. She loved the last 15 years of her life. She doesn’t want to erase them. Pink dress, pearls, seven-hundred dollar click-clack shoes, Big’s tux jacket on top — she opens the door and walks into the light.