I emailed our senior editors one line during the intermission of Mass, a lesbian rock musical with an all-female cast currently playing at the Brick Theatre: “Please don’t make me review this.” See, I love you guys, I love this community, and I don’t like giving negative reviews of anything, because I like to maintain the illusion that I’m a nice person! Despite my theatre degree, I never went into theatre criticism because of that whole “if you don’t have something nice to say” thing. If I don’t like something, I just quietly let it die. I pretend I’ve never read the book, just never got around to it. I pretend I never sat through the show.

But alas, I did sit through this show, and I’ve been urged to share my experience.

My girlfriend, Abby, was gracious enough to drop her evening plans to accompany me to this hour and a half of hellishness. We had dinner in Williamsburg at a place called Jimmy’s Diner before the show. Our food was delicious—the veggie burgers didn’t fall apart and I had a latke on mine and it was magic—and then the establishment caught on fire.

It dawned on me after the show that our evacuation of Jimmy’s Diner earlier that evening and the five fire trucks that appeared on the scene had foreshadowed the performance we were about to see.

Because basically what Mass did was take a decently talented, extremely attractive lead actor and metaphorically set her on fire. 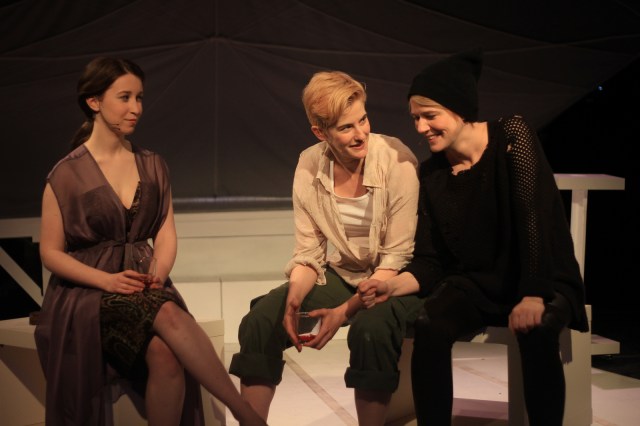 Davis, Stone and Crow, via Joe Kolbow. Performers, whatever you read next, please know I still like you as human beings.

Mass is the story of three characters, Mary (played by Moira Stone), Françoise (Esther Crow) and Kate (Rebecca Gray Davis) trying to navigate their relationships and the art world.  The book, music and lyrics were written by a man, Robert Honeywell, which I feel is important to note before going forward.

Mary and Françoise have a somewhat dysfunctional but no-more-dysfunctional-than-straight-crazy-artists relationship, while Kate is Mary’s power-hungry, trust-fund-dispensing, gallery-owning art-dealing older sister. We follow them on a journey from a New York art school to fame and fortune on the Shanghai art scene. The show illustrates the tension between the forward thinkers and the traditionalists and is supposed to ask the question: “How far would you go for art?”

The only question I was asking, however, was “How long do I have to stay in this theatre?”

The lead, Moira Stone, is quite a talented actor. If you wanted to subject yourself to the intellectual torture and eardrum evisceration that is Mass, you could get away with doing so by staring at her the entire time. Crow had some lovely moments of banter with audience members—she clearly has a strong improv back ground. Davis embodies the tightly-wound body language of her character, Kate, so well and has some really funny moments where her stick-up-her-ass personality comes to odds with the crazy artists in the room. The chorus was v. funny—art students/interns basically enslaved to Françoise as an “experimental art piece”—and was a clever piece of plot line on Honeywell’s part. There were moments. Not enough moments for me to tell you to go see the production, but hey, who am I to stop you?

Though you should know that not one cast member in this show can carry a tune. 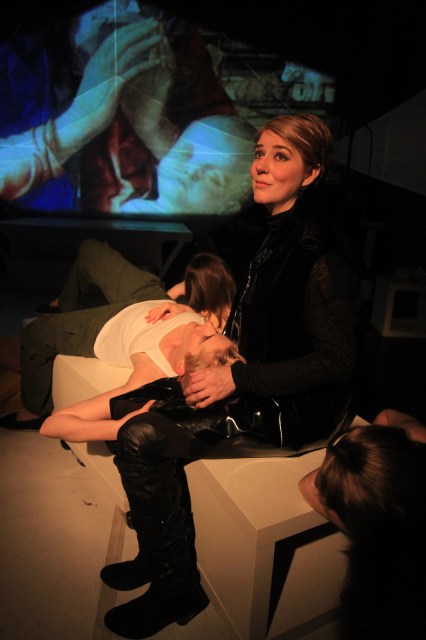 Stone and Crow via Joe Kolbow. “Don’t worry, honey, the last caption says she still likes us as people!”

Songs are supposed to move the story forward in some way, but these characters burst into poorly-tuned lyrics for no apparent reason. I was hoping the dialogue would be better, but no. The show was filled with non sequiturs to the point where I was wondering if the actors were flubbing every other line.  Also they use the term “lover” completely unironically within the first five minutes.

I had another paragraph here about the dialogue and plot and like, real theatre review stuff that I learned how to do back in University, but honestly I deleted it because reliving the experience made me want to defenestrate myself and I didn’t want to subject you to that. Let’s skip to the end.

I got my period in the middle of the scene when Mary urges Françoise and Kate to crucify her on live-stream. I’m sure there’s deep meaning here somewhere, or perhaps my body just decided it was going to self-destruct. The high point of my night was inserting my diva cup and washing away the bitter taste of that performance with a cold beer (in my mouth, not my vagina. I just realized how that sentence sounded).

via Dyke Problems (thanks Kate!)

And I felt SO BAD about it, because we knew the performers knew that we knew that this was not very good. It was a small house with a small audience and the heat was on full blast, so the lovely (not sarcastic, everyone was very nice) staff provided us with fans to wave about. These fans created a unique body language that involved many audience members hiding behind them in complete red-faced embarrassment, peering out with looks of wonderment. I could almost hear them thinking, is this really happening? I know this because at some point I started watching the audience to make sure I wasn’t hallucinating the train wreck before me.

Lack of budget is not an excuse for lack of quality. I have seen amazing shows on shoe-string budgets; hell, I’ve been in shows and produced shows with shoe-string budgets. Honestly those are the shows I prefer!  If you have little to no money, budget differently. And if you live in Brooklyn, you can’t say you can’t find singers. Just because a performer is talented doesn’t make them the best fit for your show. And if you’re one of the performers and you’re reading this, a) I’M SORRY PLEASE I HOPE YOU STILL LIKE ME and b) I’d like to see you in literally anything other than this show. I’d like to see you navigate a bus schedule or read the phone book or, really, anything else.