A Grrlz Club in Winnipeg, Canada have recently made up a new group of feminist superheroes. There’s a trading card deck and everything.

Valley Gardens Grrlz Club is an after school group for young women in Winnipeg. They meet weekly to make crafts, play games, and “have group discussions on topics from healthy dating relationships to self-esteem issues.” They also volunteer in the community or help out other organizations with events once a month. The point of Grrlz Club is to “empower girls in their teenage years and help them realize that girls are awesome and to help them inspire, heal and transform the community, each other and the world in which they live.”

I’m really jealous I didn’t have this club in my high school.

Artist Jennie O joined the group to mentor the girls and assist them with future projects.

During their weekly meetings, the group decided that the artwork should address the issues they’ve encountered as teens, like gender discrimination, stereotyping, body-issues, depression, anxiety, gossip, peer pressure and bullying. Together they decided to create a team of superheroes to combat some of the challenges teens face. So, drawing on the skill set of Jennie O, they fabricated costumes and sculpted clay and cloth dolls. It was decided that the end product would be a deck of trading cards to showcase their superhero creations and thus, The Craftastics: Agents for Social Change was formed.

The superheroes the group created are incredible. 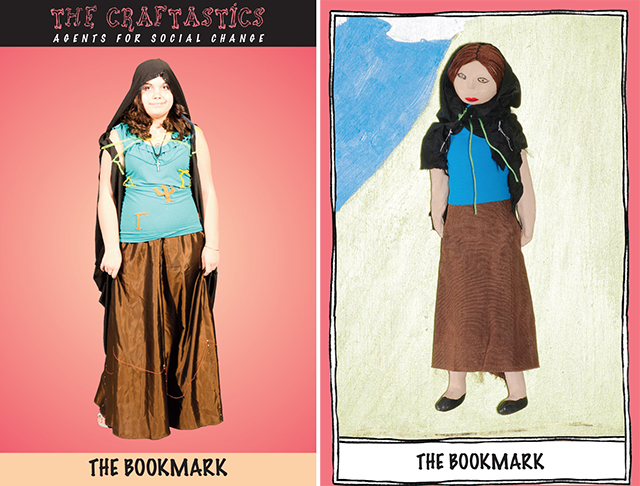 MISSION: To end discrimination against nerds. To empower teens to open a book before turning on a TV.
POWERS: Absorbs information on paper with her highlighter. Ability to change humiliating graffiti into compliments by waving her magic bookmark.
HOW SHE GOT HER POWERS: She opened up a magic book one day while spending time in the library.
HOME BASE: Underground school library. 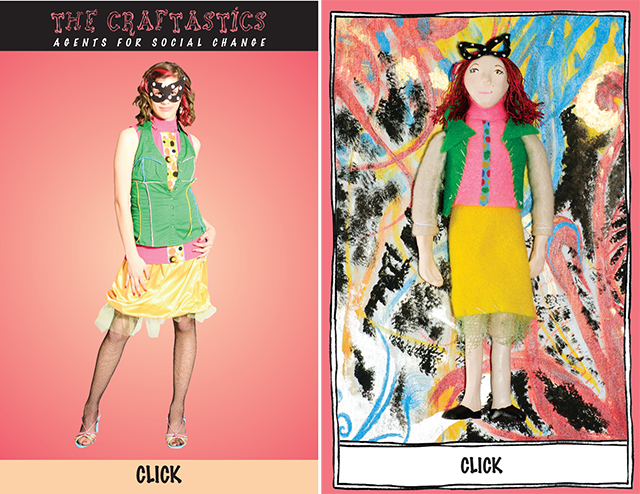 MISSION: To put an end to gossip.To turn popular clicks (or cliques) into clubs that anyone can be a member of.
POWERS: Can take away a gossiper’s voice for 24 hours. Make “uncool” teens cool without changing anything about them.
HOW SHE GOT HER POWERS: A magical remote control zapped her when she was watching Gossip Girl on TV.
HOME BASE: The lunchroom. 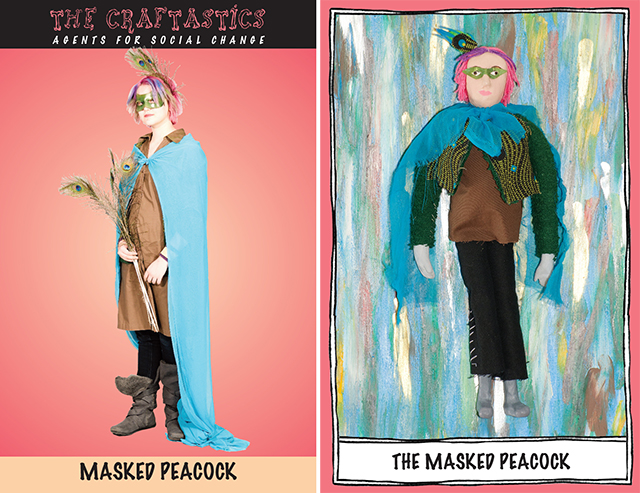 About the Masked Peacock:

MISSION: To put an end to racism.
POWERS: Spreads her multi-coloured feathers to turn racists into people who see the beauty in diversity. Heals invisible wounds.
HOW SHE GOT HER POWERS: She crossed paths with a wise peacock at the Winnipeg Zoo.
HOME BASE: E.A.L. classroom.

My heart grew three sizes today. Stopping gossip, ending racism, preventing nerd discrimination? I feel so much better about our future leaders knowing that these young women are out there, intent on making a difference.

What’s also really interesting about the project is that these teenage girls made female superheroes. That in itself is a statement. Superheroes and comics are not marketed towards young women. The comic and superhero world is so male-dominated (to the point where a woman can pitch an all-female X-Men project but they’ll hire men to write and draw it) and female superheroes in comics are hypersexualized or tokenized, but to reinvent female superheroes into something that young women will be able to positively relate to is ingenius. Good on you, Grrlz Club.

You can buy these trading cards by contacting the Winnipeg Arts Council at info[at]winnipegarts[dot]ca to purchase your own trading card deck.