In an attempt to recreate the fun-filled, adrenaline-packed atmosphere of having a debate-viewing party in your very own home, we have decided to do our debate coverage in the form of a gchat between Senior Editor Rachel and Contributing Editor Carmen, with occasional appearances from Community Managerette Lemon. They are qualified for this job via their strong feelings about the candidates and marginally competent knowledge of the issues at hand. Also, once Rachel won a Long Island iced tea at a bar for her performance at Sarah Palin Bingo during the last election, so. This will be more fun to read if you’ve watched the debate, but if you haven’t, we’ve embedded it for you!

Rachel: Carmen are you watching

Rachel: Wait all I can see are people shifting in their seat

Carmen: A white lady is talking

Rachel: I can’t hear her

Carmen: Before she said ‘chamillionaire is apparently hip-hop’ and I spit my drink out
Also my mom is in the room?

Rachel: Oh hi Mrs. Rios
Cool that a woman is moderating I guess?
Wish that it was Rachel Maddow though
Or someone not white and blond, even
I wish they televised the coin toss like in football games
Actually wait i have no idea if that actually happens

Carmen: Shouldn’t people who work in politics have like poker faces
THEY’RE SO BAD AT THIS ALREADY TBH

Rachel: I always totally forget what Biden looks like

Carmen: lol her name is Martha
He got a lil stocky and his voice sounds weird

Rachel: It’s a surprise every time, like the little plastic castle

Rachel: We have to drink every time he mentions Bin Laden, you know that right

Carmen: ‘Track you to the gates of hell’ DAMN, and Ryan smiling like ‘I’ve been there!’

Rachel: I feel like this is already way more factual than the presidential debate was. Biden is going hard in the paint.

Rachel: I think you’re ahead of me, Ryan hasn’t started talking yet in my world

Rachel: YOU’RE IN THE FUTURE CARMEN

Carmen: Haha omg he is going HARD rn against Biden/Obama and trying to play up Romney being better with Libya, which is funny since Romney literally fucked up everything abroad possible

Rachel: I feel like Ryan’s speech mannerisms are really overly careful, like he is talking to a stupid person or reading poetry

Carmen: It’s never too early / to speak up for / our values
We should not have called him a reformer / when he was turning guns / on his own people

Carmen: My mom is now yelling from the other room

Rachel: What is she saying?

Rachel:Biden is straight up giggling at what Ryan is saying. Love it. WHOA Biden! “With all due respect that is a bunch of malarkey” 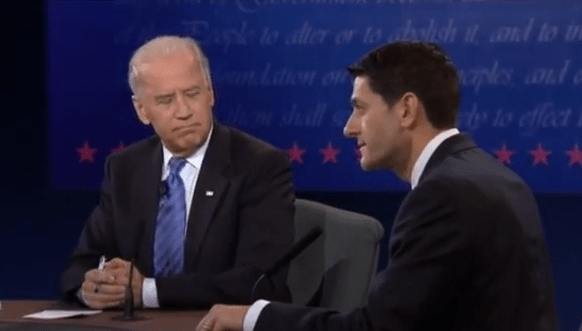 Carmen: How 1940’s polite gentleman of him

Rachel: I’m feeling good about this, this is some strong rhetoric

Carmen: “I don’t know what my friend is talking about!”

Rachel: Biden has clearly been drinking his Gatorade, is bringing is A game

Carmen: Yo Joe Biden is gonna dominate. Like I feel like the people in the front rows paid to see this because Joe Biden is a sight to be seen

Rachel: Do you think the average debate watcher really even knows that there was a crisis w/r/t Libya? I’m not asking that in a catty way, but just because I always wonder what these debates mean to people

Carmen: no, I don’t
I don’t think ANYONE knew wtf was going on in the first debate
way too wonky
also Ryan is trying to call Obama/Biden out on flip flopping
TROLOLOL

Rachel: Also, this is maybe a dumb questions, but who actually decides the debate questions? The moderator?

Carmen: Romney should avoid that at all costs
the ‘comission’ I assume

Carmen: “I’d actually like to move to Iran”
the moderator said that

Rachel: “What we should not be apologizing for is standing up for our values.” What exactly are our “values” w/r/t burning Qur’ans? Like please, elaborate.

Rachel: Ryan is good at looking at the camera strategically, I’ll give him that

Carmen: I feel like ryan is literally telling stories
yeah Biden needs some media training tbh
I think it’s ’cause they’re sitting down
threw them off

Rachel: “Can the two of you be absolutely clear and specific,” seems like she learned a lot from the first debate
Also wow, going straight to military strikes! this is just not a drill

Rachel: I don’t think I can really take discussions on military decisions in good faith. like maybe it was being raised by a Quaker pinko commie single mom (love you mom!)

Carmen: Also I feel like ryan talking about nuclear weapons is cheap

Rachel: But yeah I’m just not interested in hearing about anything other than de-escalating any military action

Carmen: Wow. “Let’s look at this from the eye of an Ayatollah.”
Paul Ryan, are you TRASHED

Rachel: I do not think Paul Ryan is qualified to do that. Wow this is so real! I’m genuinely pretty uninformed on these foreign policy issues tbh

Carmen: Yeah who is bb #embarrassed

Rachel: Mostly this is just making me really anxious

Carmen: wait Joe Biden just laughed and looked up to the gods
that’s how right he knows he is
side note: he makes Paul Ryan look like a teenage boy 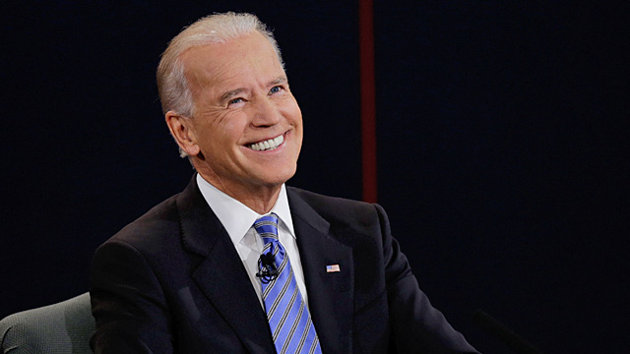 Rachel: Paul Ryan’s face creeps me out so much. I know that’s not incisive political commentary, but I can’t not say it. There’s this Buffy episode where there’s an evil frat where college boys try to sacrifice girls to a malicious reptile god, I feel like Paul Ryan would belong to it

Carmen: The ayatollahs want a nuclear weapon, just like when kids pass a yo-yo in the store. That’s what I just got out of this
omg Paul Ryan just recycled a scripted line about Russia.

Rachel: I think what Biden is ultimately trying to do here is make the point that we don’t have to operate out of fear on these decisions
which is a point I admire

Carmen: Yes, I think that makes sense. And saying that the president knows what the fuck is going on because HELLO, he is actually president unlike anyone else and talks to people and works on it
“this president does not bluff” – winning line

Rachel: Good, yes
god, Martha is just not fucking around
did she really just ask “which is worse, war in the middle east or a nuclear weapon?” 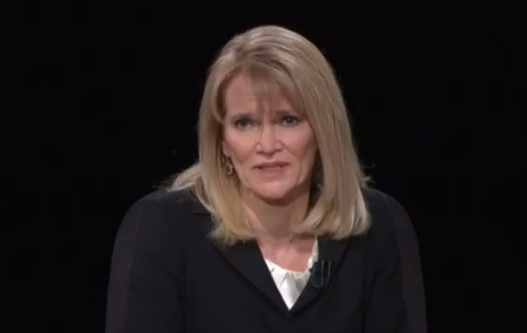 Carmen: Yes
and omg okay yes bringing up the improvements is a GREAT FUCKING STRATEGY YES

Rachel: Wow. “Can you get unemployment to under 6% and how long will it take?”

Carmen: I think Biden’s monologue is literally like the most moving thing I’ve ever witnessed

Rachel: I agree. Although I also almost cried in the doctor’s waiting room today at an ABC family show about a dad dying, so it might just be me tbh. YES thank you for bringing up the 47%

Carmen: omg Ryan said the economy is ‘limping along’ HAHA YR DUDE MADE IT CRIPPLED SO

Rachel: what’s the Kahlil Gibran quote? Even those who limp go not backwards?

Carmen: I hate when they blame democrats for not cleaning up the dog shit their animals leave in the bathroom y’know
is that too strong
YES

Rachel: The Chris Rock line is really good, “this guy couldn’t cure cancer, so you’re going to vote for cancer?”
I feel like it’s important to note that regardless of what Republicans think they’re going to do to create jobs, they’re 100% going to slash support for the people who still don’t have jobs. Like it’s not that comforting to know you might someday get a job sort of if you can’t get unemployment or welfare.

Carmen: Yeah I feel that for sure.

Rachel: “Sometimes the words don’t come out of your mouth the right way!”
tiny violin for Romney/Ryan

Carmen: “Sometimes we don’t have enough time to properly script lies for you. Vote Romney/Ryan.”

Rachel: You can’t “misspeak” that hard
also I didn’t know that about Biden’s wife and daughter
Jesus

Carmen: OH MY GOD OH MY GOD BIDEN ALREADY WON THE DEBATE HOLY SHIT “YOU JUST ACT LIKE THE GREAT RECESSION FELL OUT OF THE SKY IT’S YOUR FAULT”
#somoved

Rachel: I think it’s a good move to say that he doesn’t doubt Romney’s commitment to individuals but that he still doesn’t like his record, also
moving the discussion to where it actually belongs

Carmen: Yes, away from personal and back to actual information
I think it’s weird that Romney/Ryan talk about what they’ll do without revealing how, still

Rachel: I want to show this to my students to talk about actual argumentation as opposed to logical fallacies

Carmen: Even after being called out, like multiple times
WHERE IS THE PLAN.

Rachel: It’s crazy how they can get away with it, though
like I think on some level I thought there were rules about this
like “you can’t just make shit up” or “you have to have a plan”
APPARENTLY NOT

Carmen: Absolutely not
that’s right-wing politics. For sure. At least as of late.

Carmen: “We would’ve done it better! But we don’t know how. We just know.”

Carmen: Did Paul Ryan just admit he lives with his mom? Also I feel like saying “we’ve all had tragedies in our lives” after Biden’s story is mad awkward / disrespectful, y’know. Like damn.

Carmen: Your grandma living with you? Not like your wife dying.

Rachel: Omg if I have to watch Ryan talk like he’s going to defend Medicare I will literally throw up. It will be on some Linda Blair projectile shit.

Carmen: YES ME TOO YES. I hate when they blatantly lie. “We love Medicare! We love Social Security! We love poor people!”
#lie #morelying #somanylies

Rachel: Omg he’s perpetuating the exact same lie he’s already been called on as far as Obama taking money from Medicare?
this is so ballsy and awful

Carmen: Yeah but Biden is just like ‘oh hell no.’

Rachel: Oh my God, Ryan, YOU INVENTED THE VOUCHER THING. I will never get over how blatantly they pin the things they themselves have done on Obama. Biden getting really real with the camera eye contact, very nice

Carmen: Always and forever. So at this point Obama is so over it that he is just like ‘no stop talking you lying thirteen-year-old boy’
Oh shit she asked for a plan!! Rachel do you think they have one? Bets on no. I’ll drink this pitcher if I’m wrong.

Rachel: You have a pitcher??

Carmen: This moderator is really good. and YES. I think he pregamed.

Next: Lemon joins us, taxes, war, and abortion!

Before you go! It takes funding to keep this publication by and for queer women and trans people of all genders running every day. And A+ members keep the majority of our site free for everyone. Still, 99.9% of our readers are not members. A+ membership starts at just $4/month. If you're able to, will you join A+ and keep Autostraddle here and working for everyone?
Join A+
Related:2012 Presidential Raceobama administrationpaul ryanrepublicans