Dr. Angela McCaskill has a very impressive record. She was the first deaf African American woman to earn a Ph.D. from Gallaudet University, a federally chartered university for the education of deaf and hard of hearing people located in Washington, DC. According to her faculty page on the university’s website, she has worked for Gallaudet for 23 years in various capacities, and was appointed the Deputy to the President and Associate Provost of Diversity and Inclusion just under two years ago, on January 3, 2011. She has held many leadership roles in a variety of places, including the US Department of Education and the Model Secondary School for the Deaf, and has worked as a teacher, a research administrator, and an education program specialist. She currently serves on the Board of Trustees of the Maryland School for the Deaf.

But on Wednesday of this week she was placed on paid administrative leave from her position as chief diversity officer at Gallaudet University, because during a recent church service she signed a petition opposing gay marriage. 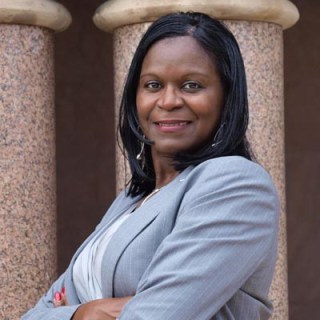 Gallaudet University President, T. Alan Hurwitz, released a statement that has since been posted (and hotly debated) on the university’s Facebook giving a brief (but not very detailed or informative) explanation for his decision to put Dr. McCaskill on leave.

“I want to inform the community that I have placed Dr. Angela McCaskill on paid administrative leave effective immediately. It recently came to my attention that Dr. McCaskill has participated in a legislative initiative that some feel is inappropriate for an individual serving as Chief Diversity Officer; however, other individuals feel differently. I will use the extended time while she is on administrative leave to determine the appropriate next steps taking into consideration the duties of this position at the university. In the meantime an interim Chief Diversity Officer will be announced in the near future.”

Some of the things that have happened since that decision was publicized are obvious and expected. The Family Research Council has demanded that the university be fined and that President Hurwitz be fired, and they have created a petition to reinstate Dr. McCaskill immediately. For the record, this group was labeled a hate organization by the Southern Poverty Law Center, and they feel that “wherever marriage is redefined,” “civil rights violations” are sure to follow. Which is funny, because I thought that denying humans the right to get married simply because you’ve interpreted the Bible to say it shouldn’t be so was a civil rights violation, but hey, they’re the ones “advancing faith, family and freedom” so what do I know!

Another fairly obvious thing is that Dr. McCaskill is extremely upset, and her husband reportedly told a reporter that his wife is so shaken up that she is currently under a doctor’s care, and that she will be hiring a lawyer.

Some of the things that have happened since the decision are less expected, though, or at least less obvious. For example, one group that has taken major issue with Hurwitz’s decision is Marylanders for Marriage Equality. In case the name didn’t tip you off, these people are way more likely to be nice to us than our besties over at The Family Research Council. But this marriage equality group has gone on record strongly opposing the school’s decision. Josh Levin, the campaign manager for the group, said:

“We strongly disagree with the decision to put the chief diversity officer on leave and hope she is reinstated immediately. Everyone is entitled to free speech and to their own opinion about Question 6 (the referendum on the ballot), which is about treating everyone fairly and equally under the law.”

The thing is, while there are definitely a lot of different identities and angles at play here, I’m not entirely sure this can be framed as a cut-and-dry matter of freedom of speech. Particularly since we have entered the age of social media and a definite decline of privacy, I think it’s a given that our actions outside of the office can and do affect our professional persona, and can actually cost us a job. Whether one thinks it is fair or not, the amount of surveillance the average citizen is subjected to when it comes to their personal life makes keeping the personal and the professional separate almost impossible. I think, rather than arguing that McCaskill has the legal freedom to sign whatever political documents she wants to (because of course she does) it would be more interesting and overall beneficial to discuss if there are instances where it is legitimate for a person’s personal choices made outside of the work environment to bar them from performing specific jobs.

2006 Student Protest at Gallaudet via NYTimes

The question of identity playing a role in ability to work at Gallaudet has come up before, both in 1988 and 2006. In 1988, students were outraged when the university selected a hearing president, Elisabeth Zinser. The school had never selected a deaf person, and the students, faculty, and alumni all stood together in a movement that has since become known as Deaf President Now, and demanded that the next president be Deaf. After a week of student strikes and other forms of protest, Zinser was replaced by I. King Jordan, the first Deaf president of Gallaudet. In 2006 protests from the students and faculty began again, this time because of the potential appointment of Jane Fernandes to the presidency. Those protesting Fernandes said it was her lack of warmth and ability to lead, and the lack of racial diversity among the finalists that made them angry, but others accused the protestors of thinking Fernandes was “not Deaf enough” because she wasn’t fluent in American Sign Language and wanted to open the school to all kinds of deaf people. Fernandes did not become president.

In both of these scenarios, students and faculty of the school wanted a person with a specific identity to take on the role as their leader, and I don’t blame them. It makes perfect sense. Now, in 2012, the president of the school wants to evaluate if a woman who would sign a petition against marriage equality is the right fit for a position that is designed to create and foster diversity. Is that so wrong?

Based on the current media coverage, it seems that Dr. McCaskill has many defenders, including people who do actually support marriage equality. It has been reported that Dr. McCaskill was a friend and supporter of the LGBTQ community on campus, and while many students feel shocked and betrayed at this news, there are members of the Gallaudet LGBTQ community who want to give Dr. McCaskill a second chance or, at the very least, hear what she has to say. It is expected that she will issue an apology.

I haven’t been able to stop thinking about this situation since I first learned about it yesterday, and I think that’s because it is forcing me to assess my “core values,” as Bette Porter might say. My brain is telling me that it is possible that Dr. McCaskill can perform her professional duties regardless of any political feelings she may have, and I also keep reminding myself that we don’t know the full story and have yet to hear from Dr. McCaskill herself.

However. I guess I just don’t believe that someone who is actively against marriage equality could really have my best interests at heart. I know people go in to jobs they don’t like and do things they don’t believe in every day — many of the people reading this probably do, and that’s okay. So I suppose it’s possible that she could set her personal feelings aside and do her job, up to and including supporting queer people in the Gallaudet community. But when it comes to a position that literally requires you to demand equality, does it really make sense to employ someone who doesn’t agree with it? Sure, someone who doesn’t believe in global warming could work for an environmental non-profit and do a fine job on the clock, then go home and refuse to recycle, but wouldn’t it make more sense to hire someone who truly believes in the cause? When you are a diversity officer, your cause is human beings. And the thing about phoning in responsibilities at a large corporation is that even if people sense you don’t care, they likely won’t feel uncomfortable approaching you and asking you to do your job. Frankly, even the environment won’t notice if you’re phoning it in at a green non-profit, you know? You’ll just do your stuff, and hopefully you’ll do it well, and your personal beliefs can kind of remain hidden, and everything will be okay.

When your personal beliefs are, “I do not believe in equality for a group of humans,” but your job title requires you to demand and work towards equality for all humans, it becomes questionable if you can phone it in. That, in my mind, is the major question in this case. Can a person create a safe space in their work environment when they have actively participated in perpetuating unsafe spaces in their personal environment?

My gut reaction is no, but the mere fact that Dr. McCaskill was employed at the school for 23 years and the fact that many LGBTQ students cite her as an ally and a friend make me feel like there is a key component of this story that is missing. I’m just having trouble making everything add up. I wonder if President Hurwitz is wrestling with his own core values and struggling with the same questions as he works to make the decision about whether Dr. McCaskill should return to the university or be let go. I wonder if there is more to this story. I wonder what will happen next, and I wonder what it will mean in the fight for equality — not just marriage equality, but full real equality like most of us can’t even begin to imagine — moving forward.