14-year-old Jamey Rodemeyer didn’t have many male friends. He hung out with girls, and he hung out on the internet, where he proclaimed and celebrated his love for Lady Gaga on his tumblr, wrote a personal blog, used twitter, opened a formspring account (like many people who open a formspring account, Jamey realized quickly that doing so was “a mistake”), and made videos for YouTube. In May 2011, Jamey Rodemeyer even made an “It Gets Better” video, in which he tells us that despite the bullying, his real friends were very supportive of his coming out. He thanked Lady Gaga for helping him learn to love himself.

Were things better? His parents and friends seemed to think things were getting slightly better. But then September came around and Jamey had to start all over again as a freshman in high school — Williamsville North High School in Buffalo, New York.

The first week of September, according to Buffalo News, Jamey wrote on his blog that “No one in my school cares about preventing suicide, while you’re the ones calling me a faggot and tearing me down” and “I always say how bullied I am, but no one listens. What do I have to do so people will listen to me?”

This past Sunday, Jamey Rodemeyer he was found dead outside his home in an apparent suicide.

Jamey’s Mother: “He touched so many hearts. I didn’t realize how many people he touched. He was the sweetest, kindest kid you’d ever know. He would give all his heart to you before he gave any to himself.”

Jamey’s Friend Olivia:  “He was always putting people first. He always wanted other people to smile, even on the worst of his days.” 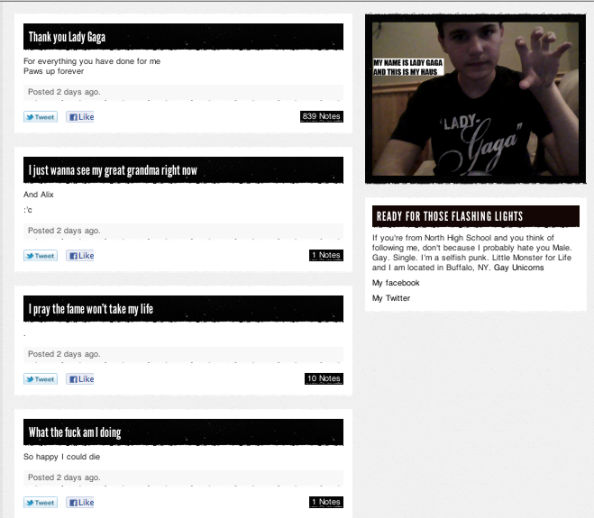 Jamey’s family went camping last weekend and his Mom said Jamey “seemed happy” and “lately, he’s been blowing off [taunts from peers], or at least we thought he was.” She says he was seeing a social worker and a therapist.

Last February another teenager at Williamsville North High School committed suicide, and the school was putting together a “depression and suicide prevention program” and offering counseling services. School officials defend themselves: “The school can offer these services, but we can’t force students to partake of them, and we’re only one piece of the puzzle. It’s really a question of us all working together.”

In eight days it will have been one year since I wrote about the death of 13-year-old Asher Brown. I didn’t know it then, but that was the first of seven posts I’d write last fall about gay teenagers killing themselves, and the first of many on the fallout from those deaths. I was thinking the other day that it had almost been a year, and that maybe things had truly changed.

Don’t Ask Don’t Tell ended its discriminatory reign today. Glee is on tonight. But none of this matters in the hallway, does it?

At the end of the It Gets Better video, Jamey told his unknown audience:

“Look at me, I’m doing fine. I went to the Monster Ball and now I’m liberated. Love yourself and you’re set. I promise you, it gets better.”