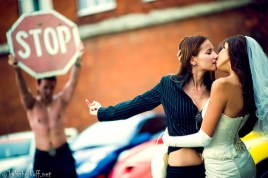 GOING TO THE CHAPEL: HEY SUCKERS WASHINGTON DC IS GONNA GET RICH AND YOU BIGOTS CAN’T HAVE ANY! – Firms expect economic windfall from gay marriage in District: District officials surmise that the regional economy could reap up to $22 million over the next three years as couples from Washington and elsewhere take advantage of the new law, and the Williams Institute, a think tank at the University of California at Los Angeles, estimates that the infusion could be $52 million … But the betrothed are not lining up quite yet. The law is subject to a 30-day review period by Congress, and opponents have taken their objections to court. (@washington post)

NEW YORK CITY: Meanwhile in New York, which recently voted against same-sex marriage, people are unhappy – “New Yorkers are the unhappiest people in the entire country, a report from the Centers for Disease Control recently revealed, and upon hearing the news, CBS went out and asked a bunch of New Yorkers how they felt about it. And you can imagine how they felt about it. They were pissed.” Gay matters aside, generally we’d rush to NYC’s defense here. But in the middle of a recession, living in a city where the average monthly rent for a one-bedroom is $3,500 can be a little depressing. Colorado, Florida, Hawaii and Louisiana are the happiest states. The cost of living in the urban centers of those states is about 50% less than New York City. So, you know, there’s that. Just saying! (@nymag)

TILA TEQUILA: In the space of four paragraphs, Tila Tequila manages to flip off the press interviewing her, makes out with her fiancée Casey Johnson, is clearly wearing a leopard-print bra, and calls Jessica Simpson “a waste of space.” So yeah, they’re still together, which means Courtenay Semel is not the oracle. (@gossipcenter)

Also guess what, Tila Tequila is gonna have a baby, too! “BIG ANNOUNCEMENT: I am going to become a SURROGATE MOTHER for my brother & his Wife!!! That is my xmas present to them. Im pregnant!!!!” (@celebrity baby gossip)

CLINTON: Clinton continues to press her point that GLBT rights are human rights, and on Monday called gay rights the “new frontier” of human rights.

NIK PACE: Nik Pace from America’s Next Top Model recently gave birth to a child “fathered” by NFL receiver Braylon Edwards, and now she’s suing him for $70,000 a month in child support. The article does not mention the duo sleeping together or dating, simply stating that he is the father of her child and that they never had a relationship. Hmm well … maybe it’s ’cause not only is she smokin’ hot but Nik Pace is a lesbian y’all! (source) (source) (kinda source) (source?) (sourcey) Furthermore, there are many rumors that Braylon Edwards is gay. If they both came out this could be a very interesting court case. If they don’t, then probs everyone will just talk nonsense about Nik being money-hungry even though we don’t think anyone so lovely could be that way obviously and should’ve won Cycle 5 sighs all around. 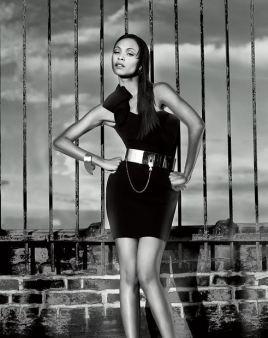 QUEEN OF SCI FI: Zoe Saldana is smokin’ hot and is according to Complex Magazine, the Queen of Sci Fi. (@complex)

COMICS: Technostraddle readers may be interested to know that actress Rashida Jones (The Office, Parks and Recreation) is making her own comic book! It’s called Frenemy of the State, and is apparently based on a crazy long-held fantasy of Paris Hilton being a secret agent superspy. Yes. (@jezebel)

CORRUPTION: “Parent Files Complaint Against Gay Teacher for Corrupting Child’s Innocence” is the actual headline of this article. (@theadvocate)

CHRISTMAS: If you were hoping to never hear the phrase “war on Christmas” again, you’re out of luck, because this guy at Slate wrote an article about it. But the article is mostly about how we won’t be hearing the phrase “war on Christmas” as much in the future, like maybe we can all just stop talking about it now, so ultimately maybe it’s okay? I don’t know, it uses the term “anti-Christmas warriors” and cites Google as a source. (@slate)

GAY MORMONS: They exist! For years, Moore would dutifully return home for the holidays and to visit his aging grandmother—sometimes with a boyfriend in tow. He says the family settled into a routine: Moore would ring the doorbell, his family would wordlessly let him in, and ignore him until he slipped into his grandmother’s room. If he stayed until dinnertime, there would be no place set at the table for him. On Christmas Eve, his family would stand around talking and laughing, but never acknowledge his presence. Other high points of this article: the term “culturally Mormon,” and the fact that they got to title it “More Than Missionary.” (@portlandmercury)

TV LESBIANS: Was this list of the top ten European TV lesbian couples made especially for us? ‘Cause just saying, it has Autostraddle faves Naomi and Emily on. Naomily, I think the kids are calling them. Does anyone know why they keep spelling it “lesBian”? Oh, I just got it! It’s like they’re saying “bi”? That’s clever. Look how cute Naomi and Emily are!