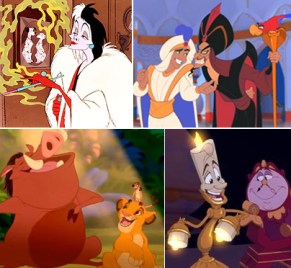 Editor’s note: I understand this topic deserves detailed analysis to be fully appreciated. Please share any additional insight you have on the Gay Disney Agenda in the comments!

Last Saturday night, as my lesbian posse and I were minding our own business debating whether to watch Troop Beverly Hills or The Little Mermaid (really Papi), I wondered aloud if Ursula was a big, flaming homo. My friend Shira leapt from the couch, ran into her room, threw this book at me and delightfully announced, “She’s a lesbian. Read this.”

“He can call me a flower if he wants to. I don’t mind.”  Flower, Bambi

In Tinker Belles and Evil Queens, queer theorist Sean Griffin walks you through the evolution of the Disney company, tracing back to how the Disney name became culturally synonymous with “family values” in the 1930s and ’40s, gay symbolism dating all the way back to Mickey Mouse and demonstrates the development of a new, more adult, image and market under Michael Eisner in the 1980s and the start of “Gay Days” at the Magic Kingdom in 1990.

“What do you want me to do? Dress in drag and do the hula?” Timon, The Lion King

While high-profile gay talent has been contributing to Disney classics over the years, including Elton John, who wrote the music to The Lion King, and Howard Ashman, who won Oscars for his lyrics to Beauty and the Beast and The Little Mermaid, there has yet to be any gay characters in any of the animated films. Explicitly gay, that is.  Just how I instinctively felt that Ursula was a lesbian (or at least drag queen inspired), turns out there are pages of hilarious conspiracy theories floating all around.

“The city of lovers is glowing this evening. True, that’s because it’s on fire, but still there’s l’amour.”

“Jafar, however, very much acts the role of a gay man’s gay villain, twisted by his desire for heterosexual power and his consequent self-enclosure in the closet. Advisor to the sultan, he is a Roy Cohn type with Leopold-and-Loeb overtones. He is counterpoised, moreover, to a healthier gay icon: the Genie, who, with Robin Williams’s voice, flames across the screen in a one-man cabaret show. “

“At first glance, Ursula seems a woman; on closer inspection, however, the Sea Witch resembles a flamboyant, Divine-ly inspired drag queen. Her octopus-like lower half further renders her gender ambiguous: the first view of her tentacles emerging from the darkness is played up for shock value…”