For gay denizens of almost any country, there’s a laundry list of bizarre Catch-22s in terms of their rights and legal status — for instance, being able to legally adopt without being able to file joint taxes with your co-parent, or winning workplace anti-discrimination lawsuits in court while DADT is still on the books. Two stories out of Australia this week illustrate particularly well the peculiar contradictions that develop around being gay all over the world.

Australia is notable for having an openly gay woman in a pretty prestigious government office — Penny Wong, a former senator, is now federal Finance Minister and an out lesbian. She’s always been open about her partner, her (controversial) views on gay marriage, and now about the child she and her partner are having together. Pretty progressive, no? In the US, only one member of the House of Representatives is an out lesbian, and there are zero out members of the Senate. But while Wong’s success in politics may be a good sign for the LGBT community overall, she’s still bearing harsh and hateful criticism from other politicians who have no qualms and apparently expect no repercussions for openly lambasting her personally as well as her family. In the most spit-take-inducing headline of the day, “Wong Baby Not Right,” South Wales conservative Christian MP Fred Nile says that he not only virulently opposes Wong’s family because “the baby has human rights,” but that it was a grievous misstep on Wong’s part to not somehow keep her entire family a secret to protect the public. 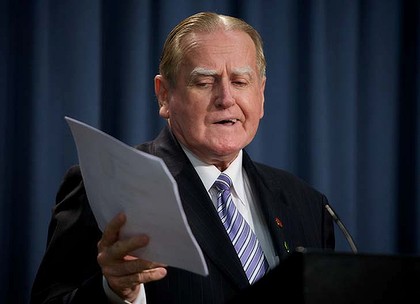 It will not surprise American readers that Nile was once the Assistant Director of the Billy Graham Crusade in Sydney; he is now President of the Christian Democratic Party and was appointed in 2007 to an eight-year term as Assistant President of the New South Wales Legislative Council by Wong’s own party, the Labor Party. He’s known for his controversial and very conservative opinions, but is also a legitimate politician — but one who feels comfortable demanding that the federal Finance Minister somehow keep her family a secret, out of consideration for the country. “Mr Nile said he was surprised Deputy Opposition Leader Julie Bishop had congratulated Senator Wong. “I’m surprised she’s done that. She’s treated this as if Penny Wong is in a traditional relationship,” he said.”

For queer and trans youth, things are extra confusing with the politics of high school making everything more complicated. In Perth, when a girls-only school forbade bringing same-sex partners to the school ball, past and present students banded together to convince school authorities to change their minds. But that doesn’t mean things are okay, or even improving necessarily — for trans students, daily physical safety can still be an ongoing issue, both in terms of lack of support from adults and violence from their peers.

“… 19-year-old Mikey came out as a lesbian as a 14-year-old and then began transitioning into a male soon after that. High school was horrific, absolutely horrific,” he said. “I would be pushed up against walls and people and girls at my school would threaten to show me that I was a girl too by threatening me with assault and sexual assault.” … Attending a school formal or ball was never an option for Mikey due to the myriad of issues he faced as a confused and ostracised Year 9 student who was considering the transition from female to male. “I never considered going to a school ball, I was too afraid.”

On the other hand, Mikey was able to find support at the Freedom Centre, where services and programs funded by the Mental Health Commission let Mikey get help under the Federal Government’s National Suicide Prevention Strategy — something America can’t say for itself in terms of mental health support for LGBTQ people, or really anyone. Obviously Mikey’s experience contrasts with his queer peers’ one of community support, but also is at least slightly comforting in terms of the options for resources and support when none is forthcoming from any other corner.

Being gay, queer or trans almost anywhere in the world means a patchwork quilt of steps forward and backward, daily victories and defeats. Australia is no different. Hopefully, though, the thrust of progress is forward; the moral arc of the universe still bending towards justice.