Many of us have been following the news of states that are legalizing same gender marriage, but a few states are joining the battle for a different legal trend that will benefit LGBTQ people. We told you about legislation in California and effort in New Jersey to prohibit mental health professionals from administering gay conversion therapy to individuals. Although the American Psychological Association asserted in 2007 “that efforts to change sexual orientation are unlikely to be successful and involve some risk of harm,” California and New Jersey are leading the way as the only two states with laws prohibiting licensed therapists from performing gay conversion therapy on individuals under the age of 18. When the New Jersey and California courts ruled on the matter, New Jersey’s Third Circuit Court and California’s Ninth Circuit Court both decided that states do have the authority to govern the conduct of professionals. However, while the Ninth Circuit Court also stated that conversion therapy ban applies to speech, the Third Circuit Court differed and said that its protection of speech held less force because “Plaintiffs are speaking as state-licensed professionals within the confines of a professional relationship.” Opponents of the legal movements to eliminate reparative therapy treatments argue that a ban against conversion therapy infringes on mental health professionals’ right to free speech under the First Amendment and their religious beliefs. Now, New Jersey opponents have found hope in the loophole of the Third Circuit’s rationale and are planning to ask the Supreme Court to hear an appeal next week. (California opponents also tried to make a case for an appeal but the Supreme Court didn’t want to hear it.)

Gay conversion therapy, also called reparative therapy, was brought to prominence by our friend Sigmund Freud, who was a really big fan of psychoanalysis. He suggested that, with the help of hypnotic suggestion, homosexuality could be removed from an individual. Ultimately, a 1909 visit to the United States, where Freud gave a series of lectures at Clark University about psychoanalysis, gave his beliefs traction in the land of homos and group fear. Even though he suggested that homosexuality could be eliminated, he didn’t really think that homosexuality needed a cure. He even tried to persuade an American mother, in a 1935 letter, that her child’s sexuality should not distress her. He wrote:

“Homosexuality is assuredly no advantage, but it is nothing to be ashamed of, no vice, no degradation, it cannot be classified as an illness; we consider it to be a variation of the sexual function produced by a certain arrest of sexual development. Many highly respectable individuals of ancient and modern times have been homosexuals, several of the greatest men among them (Plato, Michelangelo, Leonardo da Vinci, etc.). It is a great injustice to persecute homosexuality as a crime, and cruelty too. If you do not believe me, read the books of Havelock Ellis.”

After Freud’s death in 1939, however, and before the 1969 Stonewall riots, theories about gay conversion therapy gained a lot of momentum and most psychiatric establishments in the U.S. supported the notion that psychoanalysis could cure homosexuality. 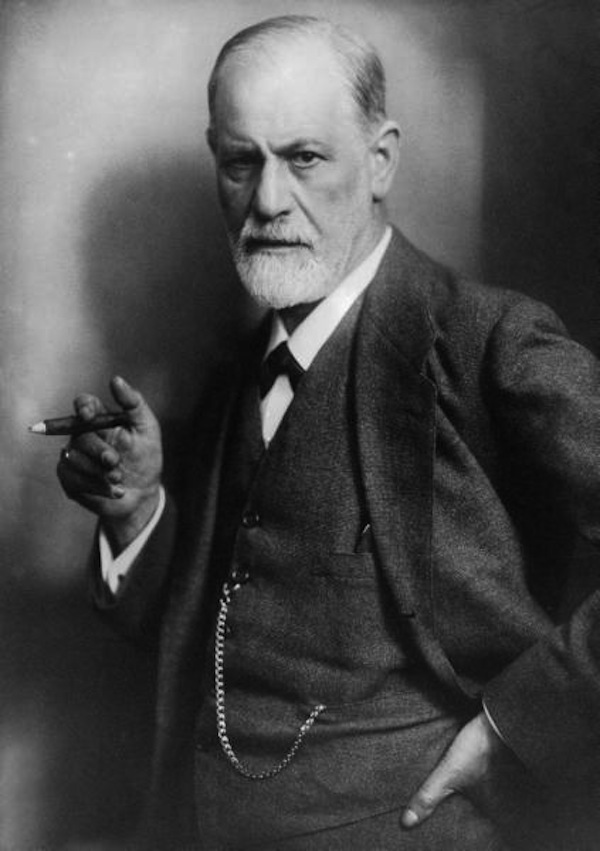 Freud is judging you
via Wikipedia

It’s unfortunate that it has taken more time to convince people that gay conversion therapy is real and incredibly harmful than it took some truly misguided theorists convince people that gay conversion therapy could eliminate homosexuality; but, in spite of the federal government’s failure to condemn this brand of therapy, lawmakers from various states and the federal district are following in California and New Jersey’s footsteps to change mental health practices for the better and end a practice that has haunted LGBTQ communities throughout the nation. Minnesota, Michigan, Ohio, Pennsylvania, Massachusetts, Vermont, and Washington D.C. all have active legislation to institute bans against reparative therapy. In D.C., proponents say that council members will take action in October to mark up a proposed bill that would prohibit mental health professionals from performing gay conversion therapy on minors, and hope that we could see a law passed this fall. D.C. Council Member Mary Cheh (D-Ward 3) argued against gay conversion therapy, insisting:

“These so-called therapies are not based in science, they have been denounced by nearly every major mental health organization in the country, and they can exacerbate the associated psychological effects and anxiety a young person may feel when coming to terms with his or her sexual orientation. I am glad that the District is at the forefront of the introduction of such bills, and I expect and hope that other state legislatures across the country follow suit.” 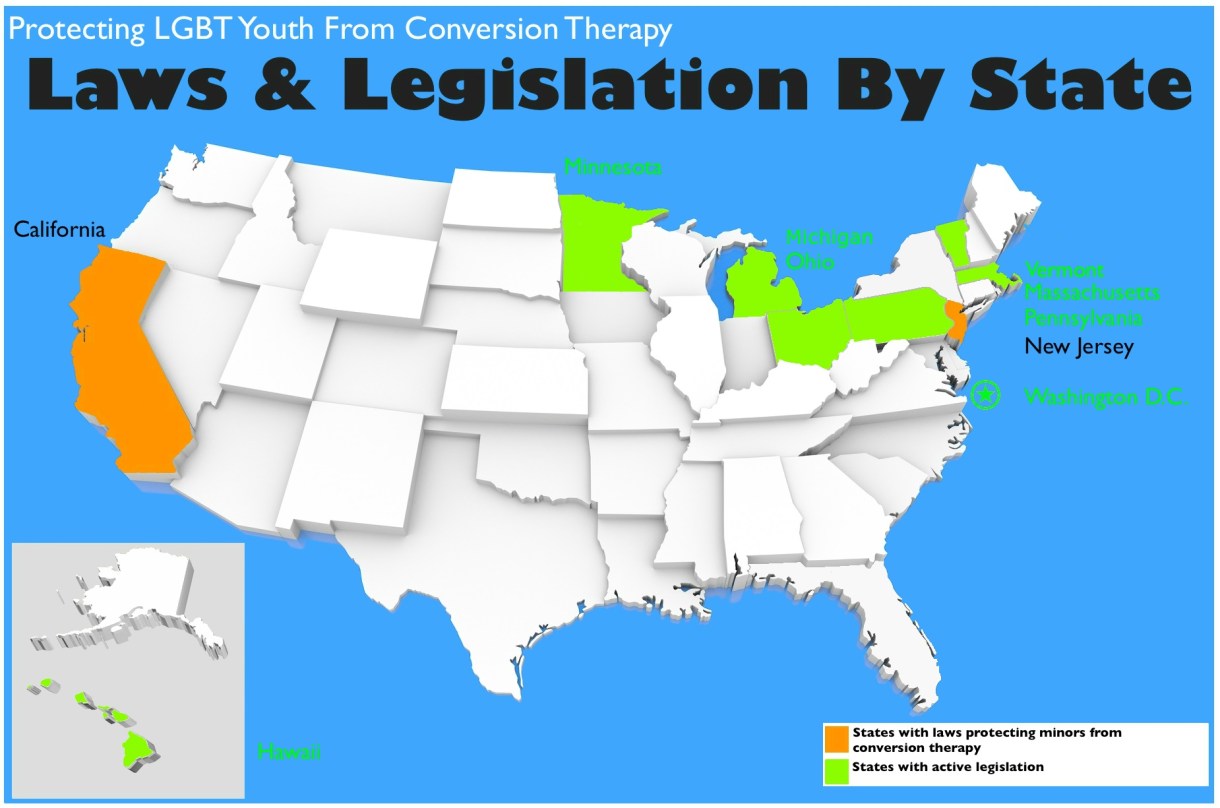 Elsewhere, lawmakers are waiting until the January lame-duck session to promote anti-gay conversion therapy bills. Adam Zemke, Michigan State Representative, introduced legislation in July that would institute a statewide ban, but in spite of the bill getting stalled, he plans to garner bipartisan support until he can bring the bill before the House again. Even in states where proposed bills failed, lawmakers are far from giving up. New York and Illinois have met some difficulties in advancing legislation, but Illinois state representative Kelly Cassidy says she is planning to reintroduce the bill in January and advocate for more understanding of the issue across party lines.

This move to prohibit the use of gay conversion therapy has the potential to really change the lives of LGBTQ folks in the United States. By establishing a limit for professional conduct in mental health fields, lawmakers are taking power away from a realm that has systematically stigmatized queer communities. As Senator the author of the California anti-conversion therapy legislation, Ted Lieu, asserted, “Not only does conversion therapy not work, but it can result in suicidal thoughts, actual suicide, guilt, depression and shame.” Work towards providing legal prohibitions against reparative or gay conversion therapy is crucial to LGBTQ movements because it ensures the emotional, spiritual, and often times physical well-being of members of our communities. Studies have found that LGBTQ youth experience higher rates of mental health challenges and health problems associated to those challenges than their heterosexual peers; given that our communities often times struggle at such a high rate with mental health complications, we desperately need a medical system that does not promote the biases of a heteronormative society. Anti-conversion therapy legislation help to protect legally our queer siblings. If these bans on mental health practices gains as much momentum as the battle to legalize same-gender marriage, we could see many states striving to protect the mental health of LGBTQ individuals by 2015.